This is a recipe with no cooking necessary. It is perfect for summer gatherings since it is a dish best served cold. Bittersweet chocolate with coconut cream and fresh berries make every bite amazing in this fruit dessert pizza. 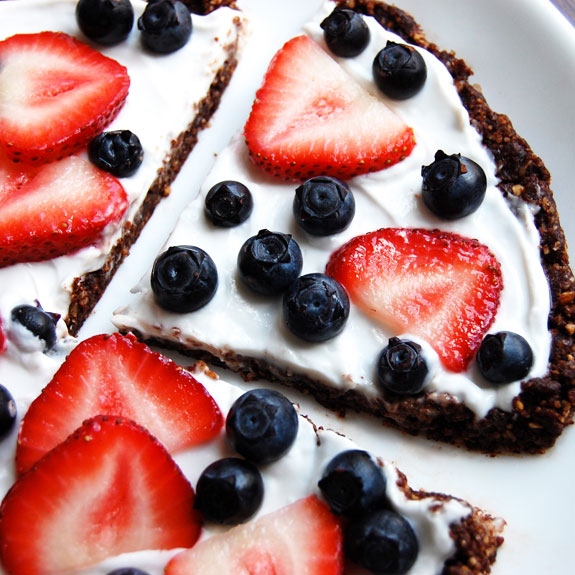 To make the base of the “pizza,” I actually used the same recipe as the raw brownie bites, except that I cut back on the cocoa powder. Unsweetened cocoa powder is in the clear for Paleo recipes, but I didn’t want it to overwhelm the dessert. I used walnuts again, but almonds or pecans could easily be used in their place. Instead of rolling the mixture into bite-size balls, for this recipe I press it into a cake pan to make the bottom layer of the dessert pizza. I lined the cake pan with wax paper to ensure easy removal later in the process. The prepared crust then gets transferred to the freezer for about an hour to harden.

The coconut cream could not be easier to whip up. I usually keep one or two cans of coconut milk in my refrigerator because I am always using the top layer of cream for one recipe or another. If I have not said it before, definitely buy the full-fat version of coconut milk. It solidifies into a much more solid block of cream once refrigerated. For this recipe just scoop the cream off the top. (The thin watery coconut milk that is left over (in the can) usually goes into my smoothies.) The thick coconut cream is mixed with a little honey, keeping it simple, but you could try any of your favorite flavorings here, such as nutmeg, vanilla, etc. The cream is spread over the crust as the second layer. 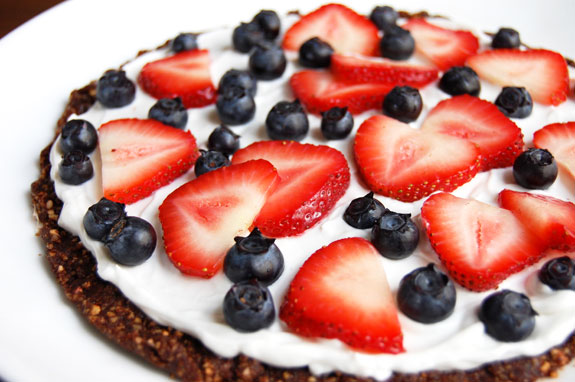 For the last layer to this pizza, pile on the berries. I am in love with berry season right now. I am taking full advantage of fresh berries around every corner at a steeply discounted price. You could top the pizza with any of your favorite fruits, such as peaches, kiwi, raspberries, blackberries, and the list goes on. I think that perhaps the red, white, and blue look in this recipe would be a great dessert for a Fourth of July picnic.

Each bite of this dessert pizza is full of chocolate, coconut, and juicy berries. The recipe doesn’t even take that long to make, and chilling the crust in the freezer is completely hands-off time. The only dish that I got dirty was the blender. Pretty good for a dessert that looks elegant and tastes delicious.