On Paleo you’ll be eating your fair share of meat, and gravy just makes meat taste better. But a traditional gravy recipe will use flour, or cornstarch, or dairy, all of which you’ll be avoiding when you’re eating the Paleo way. You’ll find that on Paleo you can have just about anything, as long as you take steps to remove the bad ingredients and replace them with better ones. The following recipes give you the savory gravy taste you’re seeking, without using any ingredients that will set you back. 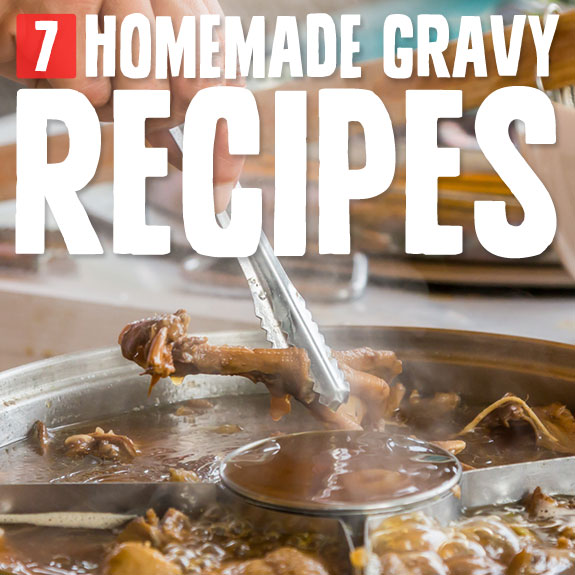 1. Easy Gravy
We like easy, as it is definitely the way caveman would have done things. Keep it easy and you keep it Paleo in most instances. This recipe really does focus on making it easy to make, including an uncomplicated recipe list and just four steps from start to finish. We like that they give you the option of using ghee instead of fat drippings because sometimes those aren’t available, but you can always have a supply of ghee on hand. This is a yummy turkey gravy that you can pour onto more than just turkey. Try it over chicken as well as your vegetable side dish. 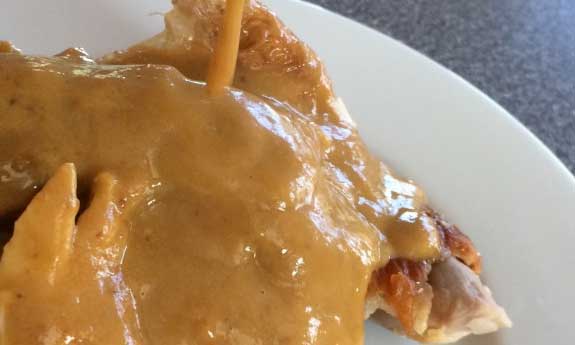 2. Gluten-Free Gravy
Eating Paleo means you’ll also be eating gluten free, since you’re getting rid of all grains, including wheat. This gluten-free gravy is part of a larger recipe that has you making a brined turkey, and they walk you through all of the steps. The entire recipe is Paleo approved, so it only makes sense that you’ll want to cook up the turkey to go along with it, especially considering that you’ll be using the drippings from the turkey to concoct the gravy. The best part is that once you have the turkey done the gravy steps are very easy, and all you need is a side of veggies for a complete Paleo meal.

3. Paleo Cream Gravy
Sounds like a confusing title, since cream isn’t allowed on Paleo, so how did they pull of this gravy wonder? They’re using one of the more popular items to produce a creamy texture and flavor on Paleo: coconut milk. On Paleo you’ll be using the full-fat version of coconut milk, so don’t go for the light or reduced fat varieties. This gravy is using bacon fat drippings so you know it’s going to have a robust yet creamy flavor. A little bit of arrowroot powder thickens it up and puts the finishing touches on its gravy-ness. They’re pouring this over a Paleo chicken fried steak, so why not follow their lead for a delicious dinner?

4. Apple and Onion Gravy
Apples provide a sweetness to this gravy that you typically don’t get in a savory food item. The gravy is the byproduct of amazing looking braised pork wings, which uses all Paleo friendly ingredients and comes highly recommended. You take the leftover juices from the pork wings, which includes sauteed onions and caramelized onions. Pork wings are a fun way to eat pork, and a suitable alternative to chicken wings. They have them shown with a side of asparagus spears, which makes a nice complete Paleo meal and it just looks great smothered in the apple and onion gravy. 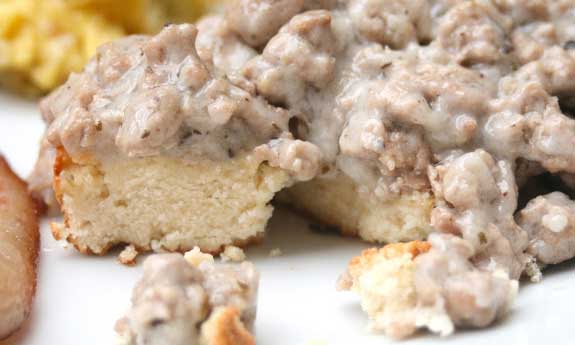 5. Primal Biscuits and Gravy
This biscuits and gravy recipe is sure to satisfy your craving for biscuits and gravy without breaking any Paleo rules. Once you solve the biscuit problem you’re good to go, and here they’re using a mixture of almond flour and coconut flour to make light and fluffy biscuits that will go great with gravy. The gravy is made from pork sausage, coconut milk, and seasonings so it comes out just right. It uses arrowroot powder to thicken the gravy up so it has the perfect consistency. You can also play with this amount until you get the gravy how you like it.

6. Turkey Gravy
You can’t go wrong with this turkey gravy, it’s sure to satisfy and you can make extra to have leftovers that you can use for a few days. Use ghee instead of butter for the browning of the turkey and onions, and coconut cream instead of regular cream for the whole cream, and you’re all set. Most of the flavor is going to come from parts of the turkey, and as such this tastes best when poured over turkey, but it also tastes great on some cauliflower mashed potatoes.

7. Bacon and Thyme Gravy
We couldn’t have a Paleo gravy collection without a bacon-infused offering. This gravy boasts the classic flavor of bacon thanks to three thick slices being used in the recipe. The gravy is being used to top a chicken breast, and this entire recipe is Paleo friendly and something you should try out. What you’ll end up with is a tasty way to spruce up a chicken breast if you’ve gotten into a rut when it comes to serving up chicken. This dish would be best presented over a pile of cauliflower rice or other vegetable side dish.