Zucchini pasta is one of the more popular Paleo pasta recipes because it produces such good results. Cutting out traditional noodles from a pasta recipe is priority one when eating Paleo. Zucchini not only does the trick but also adds a big serving of vegetables to your meal, so it’s a better option than trying to make noodles out of a Paleo-approved flour. Try them all because we went out of our way to bring you all different styles and classic pasta recreations. 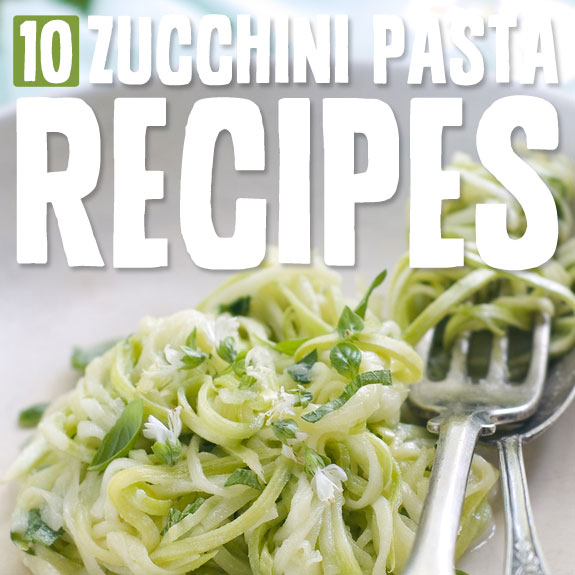 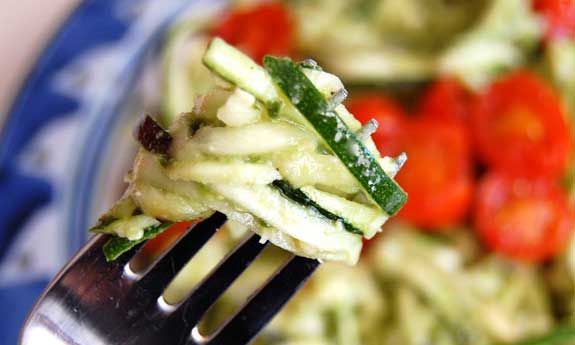 1. Easy Paleo “Pasta” with Zucchini Noodles
We like easy, which is why we had Rebecca whip up a batch of Paleo pasta using zucchini noodles, but in a way that could be done without a lot of hassle. She came up with this awesome “noodle” recipe that uses a small list of ingredients, but packs big flavor. That’s because one of the ingredients is pesto, which has all the flavor you’d ever need. Add some fresh tomatoes to the mix and you’re good to go.

2. Creamy Chicken Zucchini Fettuccine
Creamy sauces aren’t allowed on most of the popular diet plans, but that’s what makes Paleo so special. It doesn’t fret or fuss over the fat content, as long as you aren’t loading up on grains and dairy. Cauliflower is what provides the creaminess here, so there isn’t any dairy and you don’t have to worry about the grains because it’s using zucchini to make the fettuccine noodles. This definitely isn’t something you’ll see on the menu at Olive Garden, and it won’t make you feel bloated and comatose after you eat it.

3. Zucchini Pasta Pesto
Pesto is one of the best things to make on Paleo because its traditional ingredients aren’t anything that isn’t Paleo, you just have to make sure you’re using premium ingredients. This zucchini pesto pasta recipe really hits the mark, creating a simple yet satisfying plate of “pasta” that can be used as a lunch, or combined with a chicken breast to form a more elaborate meal. They provide an entirely separate recipe for the pesto, so you know this isn’t something they just whipped together, but actually uses a tasty walnut pesto that you can make a batch of and keep handy. 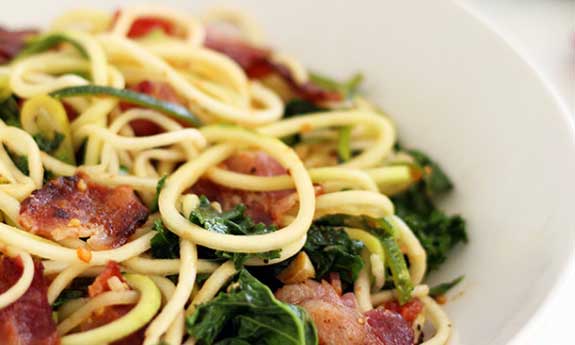 4. Spicy Bacon and Roasted Tomato Zucchini Pasta
We like spicy, and we like bacon, and we like eating healthy, so this pasta recipe is something that definitely gets our seal of approval. Rather than loathing the fact that you can’t eat regular pasta thanks to all of the wheat that goes into pasta, you can rejoice in the fact that you still get to eat a fiery, bacony, tomatoey concoction such as this. The best part is that the zucchini is not only replacing the noodles, but it’s a whopping serving of vegetables, so you can enjoy the bacon without feeling bad about it, the way most diet programs would have you feeling.

5. Bacon-Basil Zucchini “Pasta”
Bacon and basil combine to give this pasta dish plenty of contrasting flavors. You’ll get the savory taste that only bacon can truly provide, mixed with the strong herb taste of basil. This is combined with copious amounts of zucchini that has been julienned to resemble pasta. Some garlic and some walnuts join the party, but what you’ll mostly taste is the bacon and basil, as there is more of these than anything else. This can easily work to satisfy your pasta urges, without actually succumbing to eating wheat-based pasta. It’s a recipe that keeps things simple, but still manages to provide massive amounts of flavor.

6. Zughetti Carbonara
If spaghetti carbonara is your favorite, try this one that attempts to pull off the old switcheroo with zucchini instead of regular noodles. Eggs, cheese, bacon, and black pepper is what is traditionally used in a carbonara recipe, and they’ve done a good job of adapting this to the Paleo lifestyle. There is a bit of creme fraiche used, but that can be omitted without losing sight of the overall taste. If you really want to keep it you can try using coconut cream instead. The end result here is that you’re getting a recipe that adheres to tradition, with a few modifications to make it Paleo. 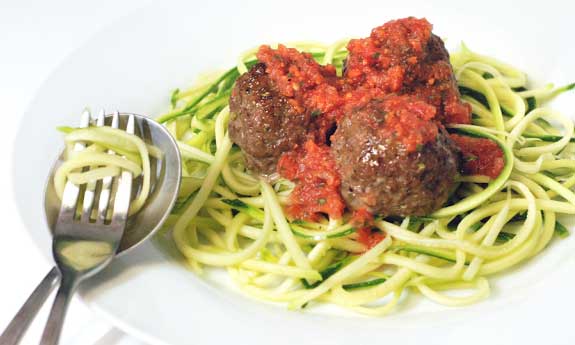 7. Zpaghetti and Meatballs
Time to dry those tears if you thought you couldn’t have spaghetti and meatballs on Paleo. You of course can have the meatballs, as long as they don’t use any bread crumbs or dairy, and that just leaves the spaghetti to be adjusted. In this recipe they’re using zucchini to make the spaghetti, so you can have as much as you’d like until you feel full, without worrying what it’s going to do to your diet. On Paleo you definitely want to forget about portion sizes and eat until you feel satisfied, the way our Stone Age ancestors did.

8. Lamb and Olive Bolognese
Bolognese is a very popular Italian-style pasta dish that usually includes a meat as well as vegetables like onion, celery, and carrots. This version is using lamb for the meat, and onions, garlic, and olives as the accompanying ingredients. The main feature here is the zucchini noodles that are added to the top of the bolognese. They’ll make sure that you’re keeping with your Paleo diet and missing out on all of the wheat found in regular noodles. That’s pretty much the main reason why pasta dishes get a bad reputation, and when you get rid of them, or in this case replace them with a vegetable, pasta can be very good for you indeed.

9. Creamy Coconut Shrimp over Zucchini “Pasta”
Coconut shrimp is one way to enjoy pasta, and as long as you are making changes to the noodles, you might as well make changes to the cream that typically comes in a pasta dish. No dairy on Paleo, so how can we get around that? She’s using coconut cream, which is very fitting since this is a coconut shrimp recipe primarily. The zucchini pasta serves as the perfect backdrop, providing you with a vegetable to match your meat in the form of shrimp and making a perfect Paleo portioned meal all in one.

10. Zucchini Lasagna
No pasta list would be complete without a lasagna, and this lasagna has a few key adaptations so that it can be considered a Paleo meal. First, and most obvious, it’s using zucchini to play the part of the thick noodles that usually go into a lasagna. This cuts out a ton of wheat, plus a ton of calories and carbs, not that we’re counting on Paleo. The other main ingredient of lasagna that has been deftly left out is cheese in the form of ricotta and mozzarella. In its place is a nice selection of vegetables and spices that will have you ready for seconds, with a smile on your face because you never felt this good after eating lasagna.