Tuna is a fabulous food for Paleo folks. Whether it’s fresh or canned, it’s packed with protein and void of carbs. Plus, canned tuna makes it easy to have on hand and ready to go at any time. But if you’re tired of tuna salad and looking for new ways to eat your tuna, this Tuna Zucchini Cake recipe is for you. It’s like a crab cake, but with the less expensive, easier to get tuna in place of the crab. 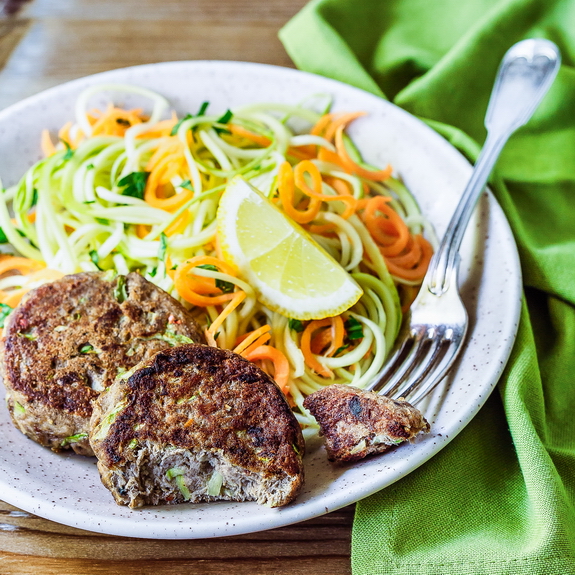 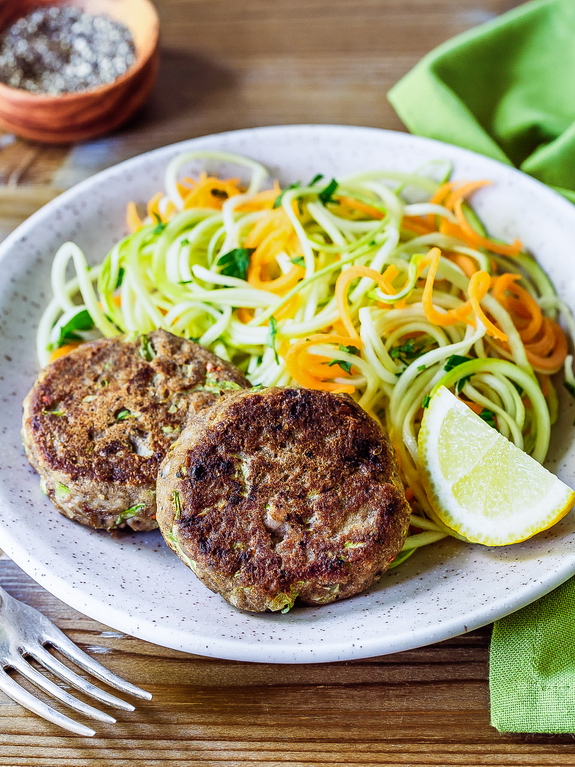 One thing a lot of people notice when they start eating Paleo is that, unless you plan well, it’s hard to eat something on the fly. That’s because when we eat on the go, we’re usually eating something that doesn’t need to be cooked, which means it is shelf-stable. Shelf-stable foods are frequently processed – which of course we don’t want when we’re eating Paleo – or they have little to no protein – and that’s not good for Paleo eaters either! Protein, the main building block of any Paleo meal or snack, often needs to be cooked in order to be consumed and hence the problem: you can’t just grab a hunk of raw meat and jump in the car to head to your next appointment! 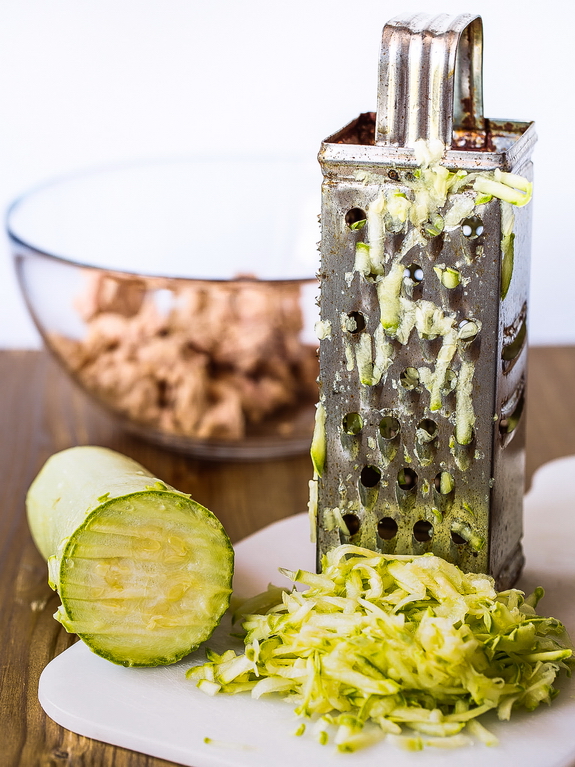 But canned tuna is a big exception to this and a great Paleo pantry staple. You can eat it straight out of the can, or add a little lemon juice, or maybe some Paleo mayonnaise, and you’re ready to go. So one of my big tips for Paleo newbies is to stock up on canned tuna until you get into a groove of Paleo food prep. 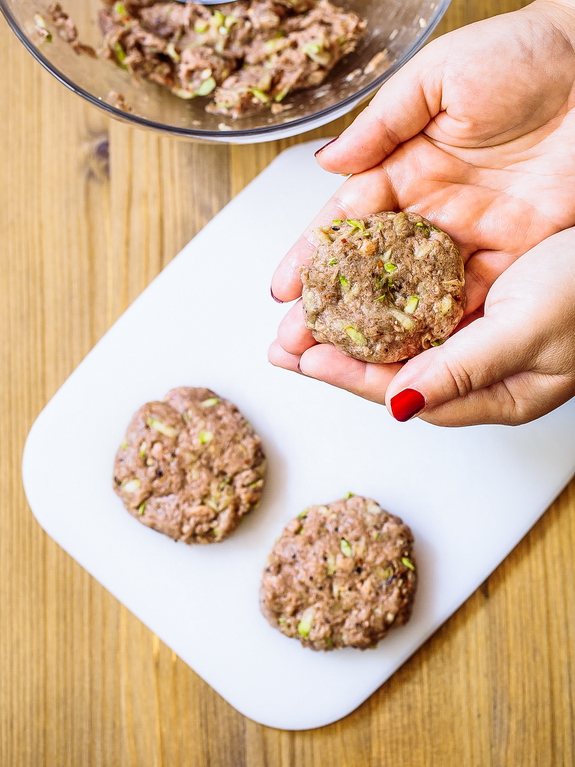 That being said, there is so much more that can be done with canned tuna than just a quick grab-and-go protein snack. I happen to love crab cakes, but getting fresh crab can be expensive and in many places it’s not available year round. So why not use canned tuna instead? You get all the flavor, but it’s less expensive and way easier to make tuna cakes than it is to make crab cakes! 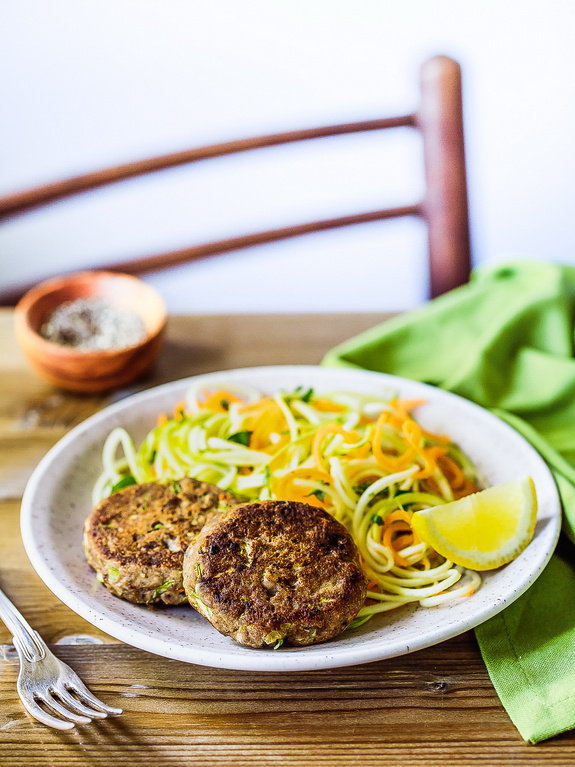 This Tuna Zucchini Cake adds shredded zucchini to not only up the vitamin and mineral content, but to keep your cakes moist while they are cooking. Then we add the same spiceds and flavorings we would if we were making crab cakes: onion, garlic, cayenne (use more if you like it spicy, less if you don’t!), parsley, lemon juice, and salt and pepper. The big difference – aside from the tuna – between our recipe and traditional crab cake recipes is that instead of using wheat flour to bind all the ingredients together, we use arrowroot flour, which Central and South Americans have been using as a starch for millennia. It’s a Paleo flour! 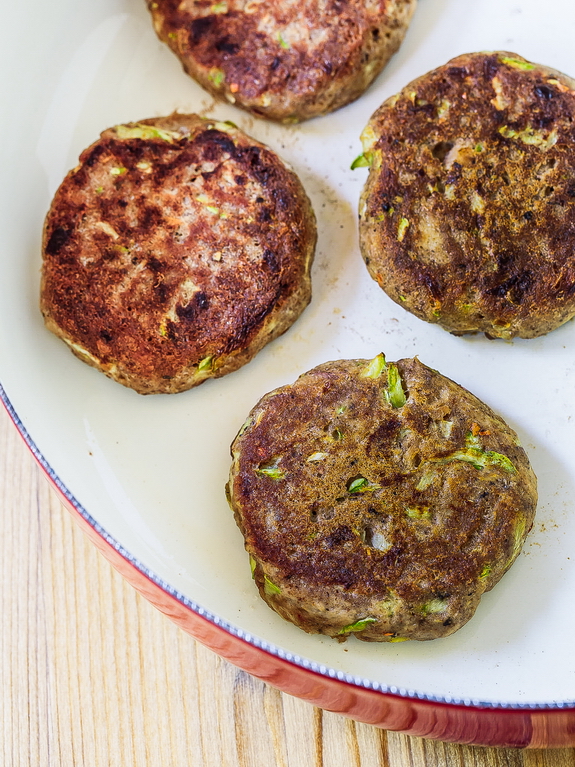 When I break up the tuna, I like to really get it into pieces that are as small as possible. But some of you might like keeping the bigger, meatier chunks of tuna in your cakes. That’s ok too! Just makes sure all the spices and the egg and arrowroot flour are evenly distributed throughout your cake so you get consistent flavor throughout.

When you cook the cakes, err on the side of low heat, otherwise the outside will burn before the inside is cooked – and no one wants that. Keep an eye on them and when they are nicely browned on one side, give them a flip and let the other side brown.

You could certainly eat these all on their own, or even use them as tuna burgers and put them on a Paleo roll, topped with your favorite burger toppings. I love using my spiralizer to make zucchini and carrot “spaghetti”, dressed with a little olive oil and lemon juice. This “pasta” makes a great side to your tuna cakes.

So dig around in that pantry and grab a can of tuna and get cooking. This twist on canned tuna will fill you up, delight your taste buds, and keep you on a Paleo path!

(Make this next: Classic Salmon Cakes)