You don’t have to give up giving thanks just because you’ve adopted the Paleo lifestyle. In fact, many of the food most commonly enjoyed on Thanksgiving Day are perfectly fine, and just require an attention to quality, an omission of a few ingredients, and a substitution of others. We’ve assembled a collection of Thanksgiving recipes that will make this year the most delicious, and nutritious, yet. 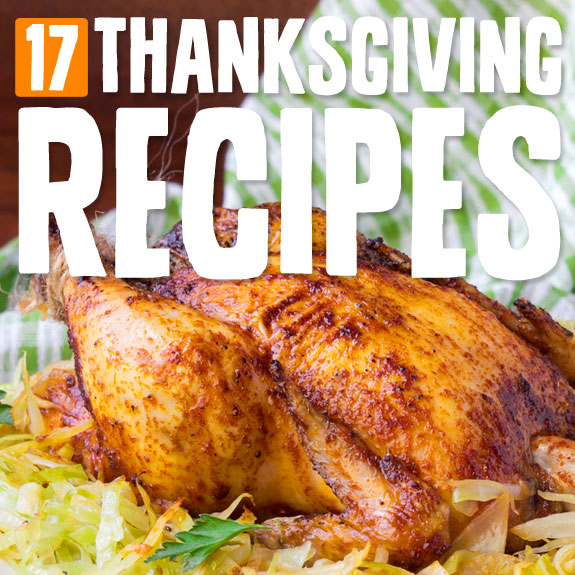 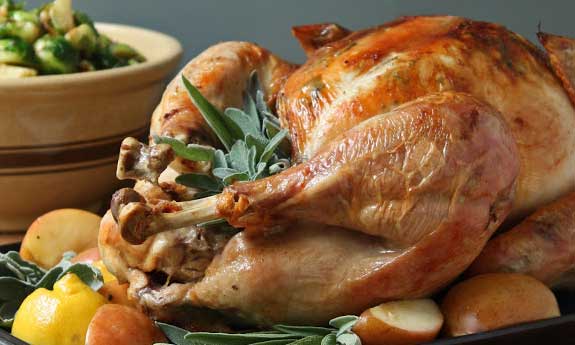 1. Easy Roasted Turkey with Sage Butter
Getting the turkey right is the key to a successful Thanksgiving dinner. Luckily turkey is a Paleo food so it’s just a matter of preparing it in a way that uses other Paleo friendly ingredients. In this case they’ve added sage seasoning to butter to give this a nice coloration. A lemon and apples help to round out this main dish and are helpful for presentation. When picking out your turkey be sure to go with an organic one to avoid all of the nasty stuff pumped into conventional turkeys.

2. Maple Glazed Spicy Apple Turkey
Real maple syrup is used in this glaze to give it authentic maple flavor, and the spiciness comes from chai spice and black pepper. Apples get stuffed into the bird to help with the flavor and also to keep it moist through the cooking process. This bird comes out looking and tasting great, and is sure to be a hit with the family, even if they don’t know they’re eating a Paleo approved turkey. It’s all about spending time with friends and family, but that’s no reason to eat a bunch of food your body can’t process.

3. Perfect Smoked Turkey
If you want to do something different this year, try smoking your turkey. It takes a little more work, and requires some extra steps, but the flavor really gets absorbed by the meat, and you end up with a perfectly cooked and succulent turkey. The ingredients that you use are a simple mix of spices, onions and garlic, and ghee. This leaves the natural flavor of the bird intact, as the spices and smoky flavor don’t overpower, but merely enhance the flavor that’s already there. Depending on where you live this might be your last chance to smoke some meat before winter comes.

4. Cure and Smoke Your Own Ham
Ham usually has to give the spotlight over to turkey on Thanksgiving Day, but it is still a nice back-up meat to have, and can help feed a larger crowd if you’ve got plenty of people and only one turkey. Here’s the steps on how to cure your own ham so you can have quality control over the process. They also show you how to smoke it so you lock in the flavor and really have something special on this special day. They outline what sort of equipment you’ll need for each step, as well as the ingredients used.

5. Thanksgiving Stuffing Meatballs
These meatballs are like packing a few different dishes into one, but in a good way. They have the meatiness of a meatball, but the classic flavorings of stuffing. There’s no bread used, so you don’t have to worry that you’re off the Paleo wagon. They even come with a cranberry dipping sauce if you want to feel like you’ve got it all in one bite. The best part is these are pretty easy to make, no need to roast a turkey or make stuffing, as it’s all combined into one bite-sized package. 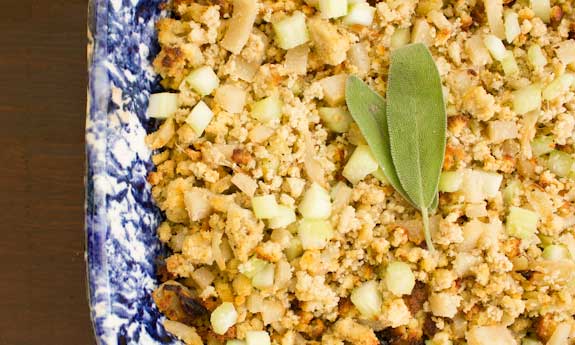 6. Paleo Thanksgiving Stuffing Recipe
Think you can’t have stuffing because of all the wheat and grain-based recipes out there? Wrong! You can have this version because it’s made using a specially formulated corn bread recipe, modified to exclude all thing non-Paleo. The corn bread is then used to make stuffing and includes a lot of classic flavors that you’re expecting when you bit into a hot, fluffy forkful of stuffing on Thanksgiving Day. This is one recipe that you can even present to the rest of the family, and they’ll think it’s just an improved version of their old time favorite.

7. Paleo Streuseled Sweet Potatoes
Sweet potatoes have become a core Thanksgiving side dish for many families across the country, which is not such a bad thing, considering that sweet potatoes themselves are an authorized food on the Paleo diet. But all the stuff that’s added to the sweet potatoes to make them taste sweet is typically not good for you. Marshmallows and plenty of sugar is usually what goes into sweet potatoes. This recipe uses fresh ingredients, and sweetens things up using natural sources like coconut milk and maple syrup. This allows you to indulge in traditional tastes of the season without feeling regretful when you’re finished.

8. Mashed Garlic Cauliflower
Potatoes are a no-go on Paleo, but no worries because cauliflower works as a pretty good stand-in. Once you doctor it up the same way potatoes get doctored up in mashed potatoes, they do a good job of fooling the senses. Don’t try to put this by a Thanksgiving purist that isn’t doing Paleo, as they’ll still whine for their mashed tubers, but for those that are willing to give a little to get a lot, these will look great on your plate and really complete the meal. They look the part and they taste really good, and you don’t have to worry about eating too much of them.

9. Tart Cranberry Sauce
Most people either love or hate cranberry sauce, as its flavor can be a bit tart, and it’s something that either completes your holiday meal, or that you avoid. If it’s a family favorite you’ve just got to include it, and there’s nothing wrong with the cranberries, a fruit that is definitely Paleo. The other ingredients that make it a sauce are something you’ll want to pay attention to, and this recipe does a good job of bringing out the flavor in the cranberries while keeping it all caveman style. In fact there are just three ingredients, all naturally sourced to stay within the Paleo parameters.

10. Turkey Gravy
Having a good stock of gravy is vital for a successful Turkey Day, and this recipe shows you how to make a Paleo friendly gravy that you can use to pour on whatever suits your fancy. While dairy generally gets the kibosh on the Paleo diet, there is dairy in this in the form of cream. If you go with this be sure to make it organic cream so that you won’t be subjected to the hormones they pump into conventionally raised cattle. You may also want to opt out of this one if you don’t handle dairy well in any amount.

11. Cauliflower “Mac” & Cheese
Macaroni and Cheese has started to become more and more of a star attraction on T-Day, but as a Paleo follower you typically have to take a pass on it. But this particular version replaces the macaroni with cauliflower, but keeps some decadent ingredients in it to make it creamy, cheesy, and oh-so-good. There is coconut milk, so you know it’s going to be creamy and velvety, and there is bacon, so it will taste savory and delicious. It also has two types of cheese and a crust made with almond meal, so it really looks like a mac and cheese doppelganger.

12. Clean Green Bean Casserole
The problem with making green bean casserole according to the can of Cream of Mushroom soup is that you can’t trust what’s gone into the can. Making a clean version is the only way to go, and you’ll be surprised just how much flavor comes through when you get rid of all the excess garbage that ends up in conventional recipes. This recipe is not only Paleo, it’s also vegan, so you know there isn’t a bit of dairy in it, and that it’s going to contain fresh, wholesome ingredients in it. They use parsnips and mushrooms to make it creamy and yummy without making it fattening.

13. Grain-Free Dinner Rolls
If rolls are a necessity for your family, you may have thought you were in trouble this holiday season because they’re generally not eaten on the Paleo diet due to the wheat. This version contains no grains of any kind but they still come out of the oven warm and fluffy and ready for a dab of grass-fed organic butter, or to be dipped in gravy. Going Paleo isn’t about going without and sacrificing the foods you love or want to eat. It’s about finding ways to make the foods you want more healthy, just by making some simple switches. 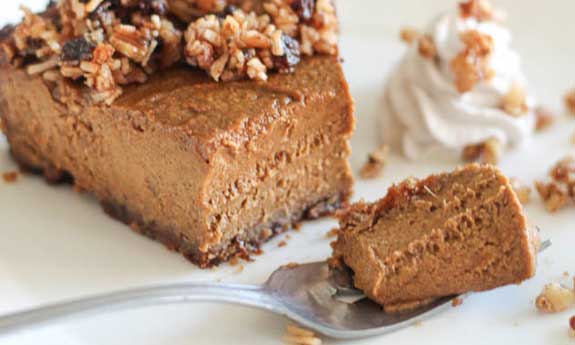 14. Paleo Pumpkin Pie
There’s perhaps no other dish more expected than pumpkin pie than the turkey. Basically, if you don’t have pumpkin pie offered as a dessert you’re not bringing your A game. Pumpkins are very Paleo, so that’s not the problem. The problem is all of the peripheral ingredients used to make the pie taste so good. This recipe has a grain-free crust, and doesn’t use any dairy in the filling. It also gives it a nice fancy crumble topping that makes it look and taste even better. Sorry, no Cool Whip topping allowed on Paleo, but here’s a Paleo whipped cream recipe you can whip up and put on top.

15. Paleo Apple Pie
Nothing is as American as apple pie, and it only plays second fiddle to pumpkin pie during the holidays. Most times you can find both apple and pumpkin on the same dessert table, and guests can choose which one they prefer. This apple pie recipe is going for classic taste, texture, and mouthfeel, but without the ingredients that will set you back on your diet plan. The crust contains no wheat, and the filling contains no refined white sugar. The result speaks for itself and this is one pie you won’t mind not eating ala mode.

16. Mississippi Mud Pie
If your family likes a bit of chocolate to wrap things up on Thanksgiving, don’t disappoint them, make this mud pie recipe and they’ll thank you for it. The crust is made without grains, the insides are made up mostly of sweet potatoes, and the mousse is made with avocados. Even the cream is Paleo friendly, so there’s really no worries when eating this. The chocolate comes from unsweetened cocoa, a Paleo baking necessity, so stock up if you plan on making other delectable desserts for you and your loved ones to enjoy throughout the year.

17. Pumpkin ‘Cheese’ Cake
If you love the taste of pumpkin pie, and love the taste of cheesecake, there’s no way around it, you simply have to make this pumpkin cheese cake replica. It’s made so that you can still have it, even if you’re a Paleo-head. There isn’t any cheese or any dairy in it, she gives it the cheesiness by using cashews, a trick often employed when trying to make creamy things without using cream or milk. The end result is a bright and colorful pie, made all the brighter by the fact that it doesn’t contain nasty things that will cause your body grief.