Sweet potatoes are one of the best vegetables you can eat on the Paleo diet, and their real beauty lies in how versatile they are. It doesn’t matter how good a vegetable is for you, if you get bored with it and don’t eat it, it isn’t doing you any good at all. Sweet potatoes represent a fantastic source of fiber and antioxidants, and have been proven to help with weight loss and they’re superior to white potatoes in almost all ways. Here is just a sampling of the many ways you can use sweet potatoes in your Paleo cooking. 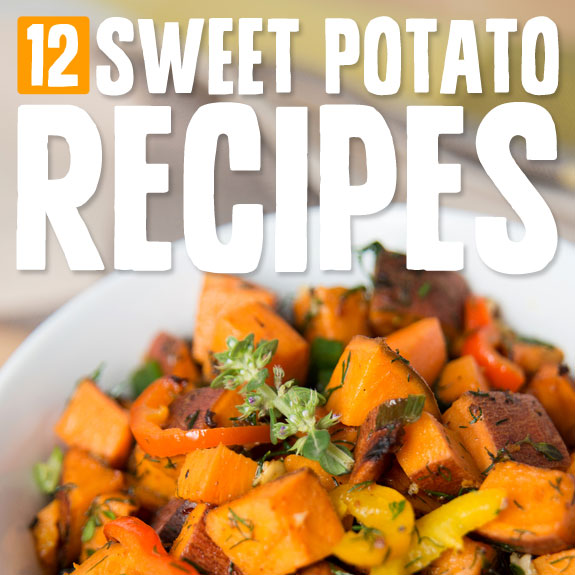 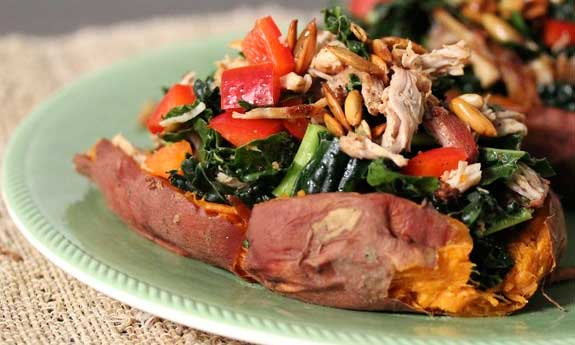 1. Grilled Chipotle Chicken Sweet Potatoes
This recipe shows you how sweet potatoes can be used as the foundation for just about anything you want to put on top of it. This makes them an easy way to make sure that you’re getting your vegetables along with your meat. In this instance they’ve made a nice grilled chipotle chicken and popped it right on top of a baked sweet potato. They even point out that you can eat the skin, which is a great idea, giving you extra fiber and vitamins and minerals. Use this recipe as a catalyst for coming up with your own ideas of what to put onto a sweet potato.

2. Sweet Potato Gratin Dauphinois
If you love potatoes au gratin, there’s no reason to give them up entirely while on Paleo. This recipe shows you how to make a fancy French version of potatoes au gratin, using sweet potatoes instead of regular potatoes. They point out that you can use a milk of your choice, with suitable Paleo milks being almond milk and coconut milk. They also give you the option of what cheese to use, so you can pick a harder variety if you’ve found that you can digest them easily, or omit it altogether if you’d rather not eat cheese on Paleo, which is actually not supposed to be consumed.

4. Sweet Potato and Fish Patties
One way to use sweet potatoes is in conjunction with other foods to make them better or more easily cooked. Here they’ve mixed in fish with sweet potatoes so that you’re getting the protein and omega-3s from the fish, but without the classic texture of fish. The sweet potato mash helps form them into substantial patties, so you’re getting the goodness of fish, without it having to be in fillet form. This is a great recipe for those that like fish or want its healthy benefits, but don’t like its texture. 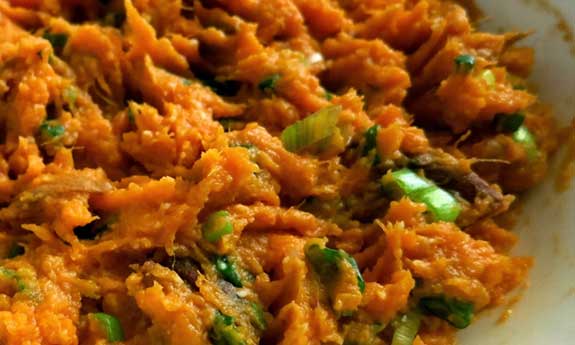 5. Sweet Potato Green Onion Mash
In this example of how to use sweet potatoes effectively while on Paleo they’re showing you that you don’t have to get swept away in a torrent of ingredients to make a tasty dish. They’ve basically taken sweet potatoes, some green onions, and parmesan, mashed up the lot and called it a side dish. This is better than just serving up plain mashed sweet potatoes, which can get boring real quick. It shows that you can pretty much take any other vegetable and add it to your sweet potatoes to help flavor it up and also add to the nutrition.

6. Walnut & Coconut Whipped Sweet Potato Casserole
Need a batch of sweet potatoes to go with the rest of Thanksgiving or Christmas dinner or any other potluck style occasion? This sweet potato casserole is loaded with yummy items like walnuts, coconut flakes, and plenty of sweet potatoes of course. You pretty much just bake up the sweet potatoes until they’re done just right, and then put in the remaining ingredients as instructed until it starts to resemble a casserole. They won’t even know this is a Paleo dish if you don’t want them to, as some people won’t eat anything labeled diet food.

7. Taco Shepherd’s Pie
Here’s an awesome twist on the traditional shepherd’s pie which takes away the use of white potatoes and adds in sweet potatoes, and also gives it the taste of tacos. The taco flavoring comes from cumin as well as taco seasoning, so it’s not as hard as it sounds, and the other ingredients it contains contribute to the taco essence. Beef, peppers, and onions will give these a real taco kick and their flavor really gets brought out by the taco seasoning. This is great for a family that loves tacos but doesn’t really need the shells.

8. Raw Sweet Potato Salad
Check out the way they turned sweet potatoes into noodles for this raw sweet potato salad. By keeping things raw you help it to be more Paleo because nothing is more Paleolithic than eating foods as close the the way they are in nature as possible. Sure Paleo man had the means to cook food, but in all likelihood many of the meals would have been eaten raw, just for the sake of convenience and an on-the-go lifestyle. Walnuts help give this more flavor, in addition to the curry almond sauce that gets drizzled on it. 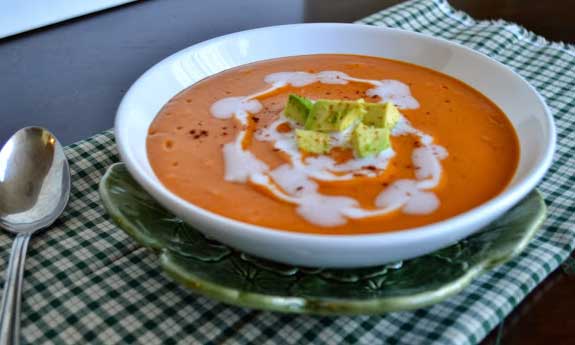 9. Paleo Spicy Sweet Potato Soup
Have you ever thought to make a soup out of your sweet potatoes? They work great at giving it a creamy consistency, and adding a good amount of coconut milk doesn’t hurt either. What you’ll get is a very rich and creamy soup, and you’ll have trouble remembering that you’re actually on a diet. That’s the fun thing about Paleo, as it’s unlike any diet out there in terms of what you can eat, and how many different foods you can enjoy, rather than a huge list of foods you can’t have.

10. Paleo Sweet Potato Meringue Pie
You might have heard of sweet potato pie, but how about a sweet potato meringue pie that is Paleo friendly? There’s plenty of sweet potato goodness in this pie, and the crust is made from coconut and arrowroot flours to avoid grains. The meringue is just honey and egg whites, both Paleo approved. The pie itself is made up of wholesome ingredients like eggs, sweet potatoes, cinnamon, nutmeg, and maple syrup. You might not have thought of sweet potatoes as a dessert option before, but that’s about to change.

11. Hasselback Sweet Potatoes
Hasselback potatoes are a fun way to prepare and eat a potato, and now they’ve applied the same technique to sweet potatoes, all while keeping it Paleo approved. They’re sliced up just right and then they’ve added an apple chutney to it, as well as some walnuts. These flavors dovetail nicely with the sweet potato, and the hasselback cut makes it look really cool on your plate. This is one side of sweet potatoes that you won’t hear any grumbling about, and a good way to shake things up if you’ve been looking for a quality side dish.

12. Paleo Rosemary and Sea Salt Sweet Potato Chips
This recipe reminds us that we don’t have to give up potato chips while on Paleo, we just have to switch them over to sweet potatoes instead of white potatoes. Why do white potatoes get such a bad rap, while sweet potatoes come out as such a winner? The fiber content is one reason, but it’s also the way they’re broken down by the body. Sweet potatoes are actually helping you out, while white potatoes aren’t really doing much of anything. Both types will help you feel full for awhile, another great reason to start eating more sweet potatoes.