The one thing you might have thought you’d be missing out on is foods made with flour, like pancakes of all types. But Paleo chefs have found several different ways to get around that minor roadblock, and they’re more than happy to share their recipes with you. When you add sweet potatoes to the mix you’re getting a host of antioxidants, vitamins, and minerals to give a boost to your morning, or whenever you enjoy these. And because these are all Paleo approved, you can enjoy them with no guilt. 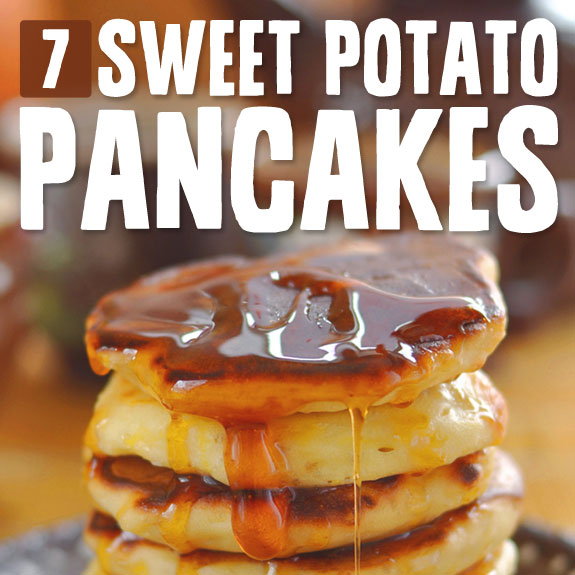 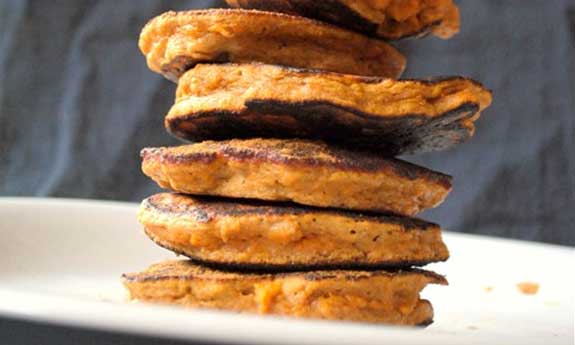 1. Sweet Potato Pancakes
Let’s start things off with a very classic recipe that hasn’t added anything unnecessary to the mix, and is going to produce sweet potato pancakes that you’d swear are the real deal. They’ve opted for coconut flour on these, which is going to lend just a hint of coconut to the flavor, and also help to create a lighter and airier pancake. You’ll end up with a bit more of that coconut flavor because they cook these up in coconut oil. When you eat pancakes on Paleo you can top them off with real maple syrup, just be sure it’s pure and organic.

2. Zucchini and Sweet Potato Pancakes
These pancakes can be eaten as a meal all by themselves, or as a side dish to a meaty main dish. They’re using both zucchini and sweet potatoes, so you’re getting a good portion of your vegetables for the day, and you’ll find plenty of other good-for-you items on the ingredients list, like Extra Virgin Olive Oil, an onion, eggs, and almond flour. Almond flour is a flour that is used regularly in Paleo cooking because it helps give the desired texture without having to subject yourself to wheat-based flour.

3. 3 Ingredient Sweet Potato Pancakes
The wonderful thing about cooking Paleo meals is that the ingredients are all natural, and they don’t try to overcomplicate things. For example, this recipe uses sweet potatoes as one of the three ingredients of course, and eggs and bananas round it out. There’s just a bit of oil used to cook them up in, and some seasonings to make them taste right. But overall, they’ve stuck to their promise of just three ingredients, so you get to have the peace of mind of knowing everything that’s gone into your meal. 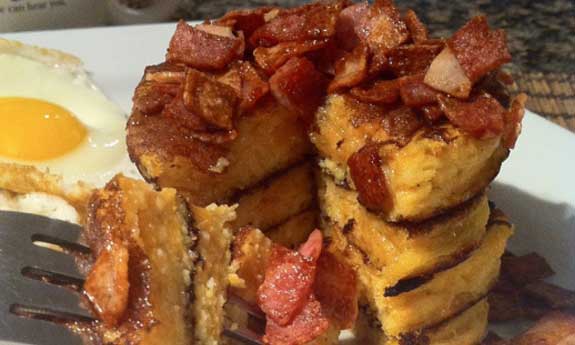 4. Dieffs’ Paleo Sweet Potato Pancakes
These sweet potato pancakes are pretty standard, but the reason they’re so tempting is because of how they’re topped. On Paleo you pretty much have license to eat most any meat, as long as it makes sense that it would have been around back in the Stone Age. In this case he’s using chicken bacon to top these pancakes off, so you’re getting the savoriness from the bacon, contrasted by the sweet potatoes and on top of all that he’s using real maple syrup, which will be packing some serious sweetness.

5. Paleo Sweet Potato Pancakes with Cinnamon Apples
They’re doing their best here to doctor up these sweet potato pancakes and make them your favorite. They’ve topped them off with cinnamon apples so you’re getting the hearty taste of sweet potatoes baked right into the pancakes, and then the sweet and cinnamony apples on top so your taste buds get a real treat. Don’t forget to spread some grass-fed butter over the pancakes to moisten them up and make them taste great. A classic breakfast gets a Paleo upgrade!

6. Sweet Potato Banana Pancakes
When making your sweet potato pancakes, you may be tempted to start adding new ingredients to it, but are unsure what will taste good. Sweet potatoes don’t mix well with every food out there, but in this case they go quite nicely with bananas. So in addition to the nutrition you get from the sweet potatoes, you’ll also be getting potassium and extra fiber from the bananas. These are two important things your body needs, and the Paleo diet is all about meeting your nutritional needs naturally from the foods you eat, which is why vegetables factor so heavily, and fruit comes in as the third most food you should be eating.

7. Paleo Sweet Potato Pancakes
They are taking the liberty of doctoring up this recipe so that it is both in the style of traditional sweet potato pancakes, but with more going on. They topped it with bananas, which is a great idea because of the nutrition bananas provide, as well as their obvious connection to early man. But they didn’t stop there: you’re getting extra flavor from pumpkin pie spice, which is going to give them that certain flavor you only equate to pumpkin pie, making them a good choice for fall mornings. To top them off further they’ve added honey to the top, which also adds further nutrients, in addition to the natural sweetness of honey.