Potato pancakes are a dish that anyone can love, whether you are celebrating Hanukkah traditions or enjoying a regular family dinner. These sweet potato latkes are crispy on the outside and savory on the inside, perfect when served hot out of the skillet. 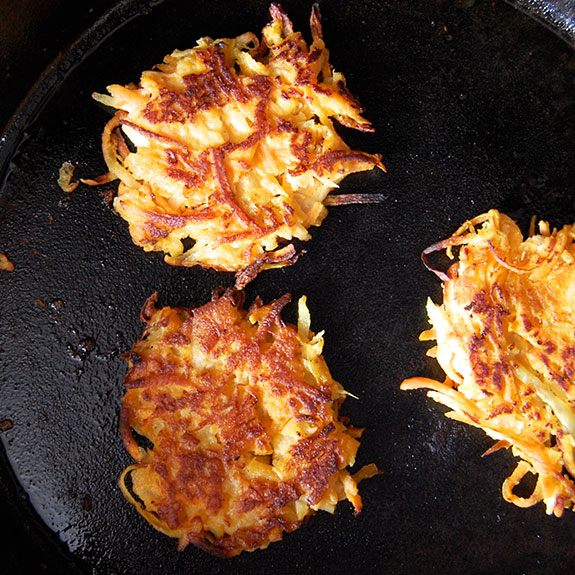 As an added bonus, these latkes are a bit healthier than the traditional version made with potatoes and fried in vegetable oil, instead using sweet potatoes and vegetables cooked in coconut oil. To save a little time and make this recipe more efficient, I shredded the sweet potato, parsnips, and onion in a food processor. Use the grater blade to make quick work of the vegetables. Then wring them out for all they are worth in a kitchen towel. Try to squeeze as much moisture out of the vegetables as you can, so that they fry better in the pan and get crispier.

Traditionally, latkes are bound together with flour. But eggs work just as well, so they are mixed in to the vegetables here. Also add a little almond flour, salt and pepper. I like to throw in a pinch of cayenne for extra flavor too. Once everything is mixed together the latkes are ready to be formed. 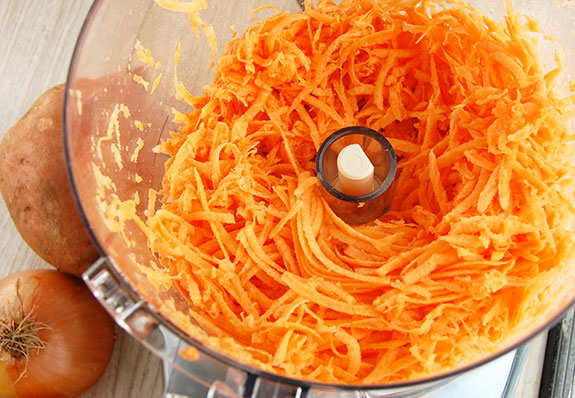 Get a skillet hot and sizzling, and then add about 2-3 tablespoons of the sweet potato mixture to the pan. Use a fork to flatten it into a small thin pancake. The key is to make the latkes small so that they do not fall apart while they are frying. Cook them on each side until they are crispy. I added more oil into the skillet with each new batch. 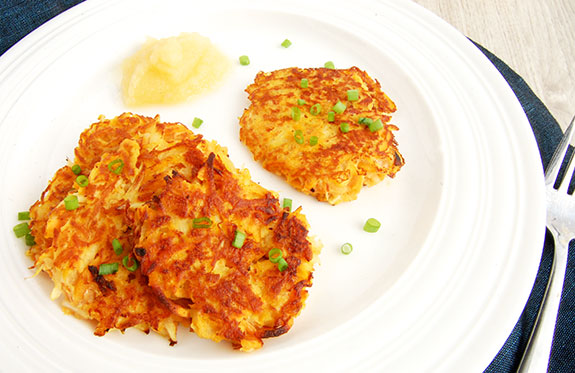 I highly recommend keeping the latkes warm in the oven until all of them are cooked. Set the oven to about 175 degrees Fahrenheit. One the latkes are done frying on the stove, transfer them to a baking dish and place them in the oven to keep warm. Serve them with a dollop of horseradish cream and green onions. Or, keeping with tradition, a side of applesauce, for a sweet and savory meal.