Regular white potatoes are a no-go on Paleo, so you’ll want to get familiar with cooking up sweet potato hash. They’re doing new and different things in each of these recipes, so you’ll want to choose the ones that jump out at you, and try them first to see how you like them. Chances are, once you see how great these taste, you’ll never go back to regular style hash browns again. And since sweet potatoes bring antioxidants and fiber to the table, there’s really no need to switch. 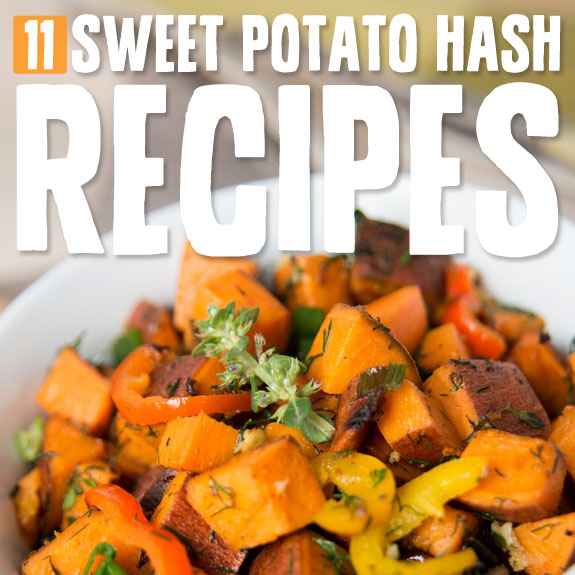 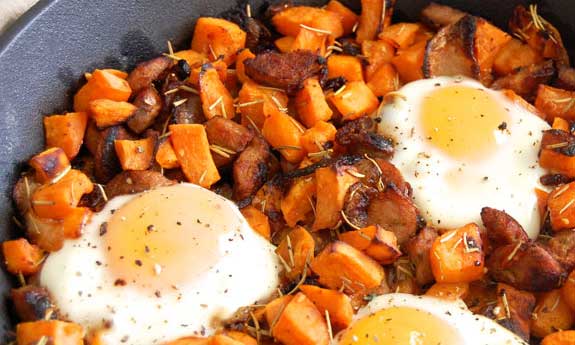 1. Breakfast Sweet Potato Hash
You can’t go wrong by cooking up this sweet potato hash that Rebecca made. It contains only 8 different ingredients, keeping things simple in the Paleo fashion of cooking. She’s serving this up with 3 eggs, which when combined with the sweet potatoes will give you fuel for hours. You’ll easily power through your morning when you start it off right with a balanced Paleo breakfast. It sure beats the “balanced breakfast” they show in cereal ads.

2. Paleo Bacon Sweet Potato Hash
Adding bacon to a recipe is one way to give it a serious flavor upgrade, and since bacon can be eaten on Paleo there’s nothing stopping you. That’s why this is a sweet potato hash recipe you’ll only see on the Paleo diet and nowhere else, as other diet plans make an enemy of bacon and have you limiting it to a free day or a free meal. What a perfect addition to any breakfast, especially as a side to eggs, any style. You can serve these up and feel good knowing that you’re actually getting more nutrition from them.

3. Sweet Potato Hash in Maple-Roasted Acorn Squash
This takes hash to a whole other level by placing it inside roasted acorn squash. It’s the sort of dish that you could see being served up in a gourmet restaurant, and one way to prove to yourself that you can eat well while on Paleo. A sacrifice is only a sacrifice if you are giving up a better thing to have a lesser thing. That’s why you shouldn’t feel like you’re sacrificing anything by not being allowed to eat potatoes on Paleo. You can eat sweet potatoes, which offer more flavor, more vitamins, and more fiber than white potatoes. In this recipe they are given a proper stage. 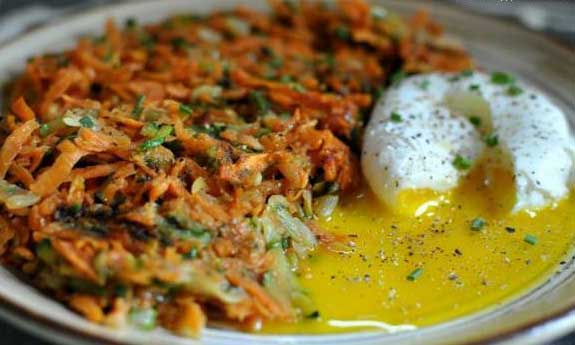 4. Zucchini & Sweet Potato Hash
Zucchini is a great vegetable to add to sweet potatoes because it gives an additional texture, while not taking anything away from the sweet potatoes in terms of taste. While zucchini brings its own flavor to the mix, it doesn’t overpower the sweet potato, and the two coexist nicely. And while we’ve seen zucchini used as pasta, it serves equally well here, helping sweet potatoes take the place of regular potatoes in a hash brown recreation. You’ll also be getting some onions in this, and they’re using ghee to fry it up in, which is going to add a nice buttery flavor to the whole thing.

5. Sweet Potato & Sausage Hash
Here’s a yummy sweet potato hash that uses sausage to bring plenty of flavor to the scene. While sausage isn’t the preferred way to eat your meat on Paleo, it’s still acceptable, and this has allows you to get fiber and antioxidants along with the sausage so you are sticking to the Paleo eating recommendation of a half and half split of meat and veggie at your main meals. Coconut oil is used to fry this up in, and they’ve added a bit of celery for good measure. Overall, a fantastic hash recipe that you’ll enjoy cooking up, and eating.

6. Macadamia Nut Cookie Sweet Potato Hash Browns
They’ve cracked the code on yumminess with these sweet potato hash browns by adding in the taste of Macadamia nut cookies. They didn’t actually add in cookies, but rather they’re using a coconut butter that has macadamia nuts added into it, and provides the taste of cookies. All of the ingredients in this special butter check out as being Paleo friendly, and this is one sweet potato hash recipe you won’t soon forget. It has all of the flavor of the sweet potatoes, with added sweetness from the coconut butter which has honey in it. 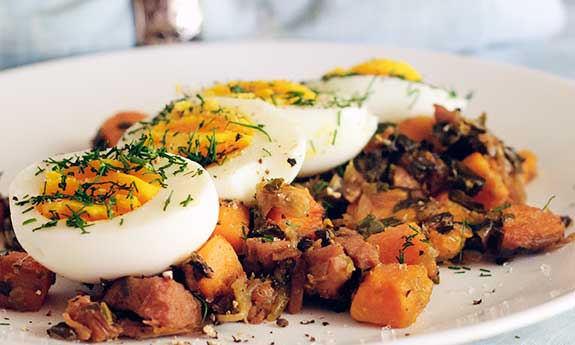 7. Collard and Sweet Potato Hash
Collard greens add just about as much nutrition as the sweet potatoes, making this one nutritious hash, and flavorful as well. They’ve added in some smoked ham, and have the serving suggestion of eggs on top of the hash. This is a popular way to serve it up, and not only looks good but makes it all easier to eat. Check with the recipient of this hash to see if they want their eggs on the side or not if you choose to cook up eggs with this. We’d recommend it, since that will serve as a nice protein and really round out this meal.

8. Brussels Sprout and Sweet Potato Hash
Brussels sprouts are often brought up when people list foods they don’t like the taste of, but you have to give them another chance if you currently don’t eat them. In this sweet potato hash they do a lot more than boost the nutrition profile of the dish, they actually add to the flavor as well. The trick is to use fresh Brussels sprouts, organic if you can find them. When cooked up with bacon they do a good job of absorbing the flavor, and they lose a bit of the edge that most people complain about when it comes to eating Brussels sprouts. They’re too nutritious to write off.

9. Pete’s Paleo Hash
One thing to point out about this hash is their attention to detail and using premium ingredients. They’ve gone with nitrate-free bacon, which you should always do when eating bacon on Paleo. You want it to be as unprocessed as possible, and bacon isn’t the best choice of meat on Paleo, but it is something you can have. Here they’ve combined bacon with blueberries and an apple as well as a lot of sweet potatoes to make an interesting has that really sets itself apart from the others. 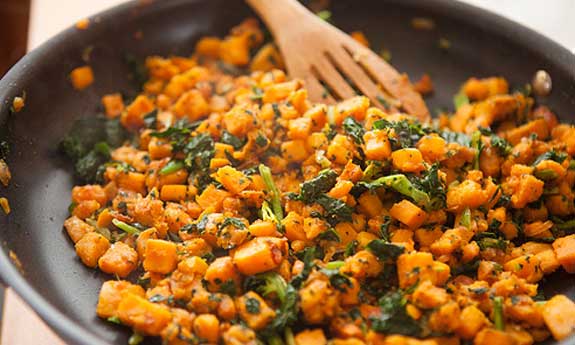 10. Sweet Potato and Kale Hash with a Fried Egg
Sweet potatoes are making the headlines more and more for all of their healthy benefits, so when you add in another newsmaker in kale you’re in for a real treat, nutritionally speaking. The two flavors actually do go together nicely, and you don’t really have to focus on the fact that you’re getting two superfoods in one meal, you can just focus on how good it tastes. One thing about eating Paleo is that you’ll naturally be drawn to eating in a healthy way, rather than feeling like you have to force yourself through sheer willpower.

11. Chorizo and Sweet Potato Hash
The chorizo in this has is going to give it a nice spicy, meaty taste and will have you reaching for seconds before you even realize what you’re doing. There is also an onion and some peppers added for extra flavor, making this a fantastic hash to fry up whenever the mood for hash hits you. The best thing is that since it uses chorizo you don’t have to add anything else, it’s pretty much a complete meal. Even though the sweet potato isn’t thought of as a vegetable on most diet plans, it fills in nicely for one with its vitamins and fiber.