Sweet potato fries are a delicious way to eat your vegetables on Paleo, and make a great side to many different meat dishes. You can make them in a number of ways so that you don’t get bored with them, and we’ve provided a sampling of a few of those ways. Don’t be afraid to tinker with your sweet potato making and come up with your own way of making them, adjusted perfectly to your own personal taste. It’s the caveman way of making things, trial and error, and learning what you like. 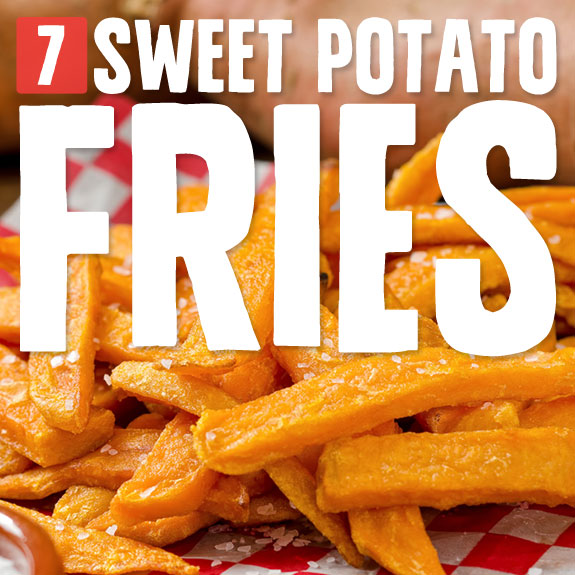 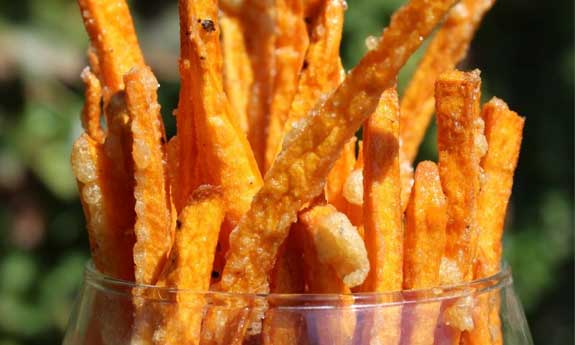 1. Salt and Pepper Sweet Potato Fries
You can’t get more classic than salt and pepper when it comes to French fries, and these sweet potato fries bring it back to basics. They’ll easily be able to satisfy your French fry craving, and you can pair them with a nice juicy burger since sweet potatoes count as your vegetable. Your Paleo burger won’t have a bun, but that’s OK, because you’ll still get the beefy flavor, mixed with the French fries, and you’ll be able to successfully turn away anything resembling fast food. You may be surprised just how easy Paleo makes it to turn your nose up at these unhealthy foods.

2. Crispy Sweet Potato Fries
Getting sweet potato fries crispy is no easy task because you don’t want to make it so they’re dried out. By baking them you’re cutting out a lot of the fat, which the Paleo diet isn’t concerned so much about the fat content of food, but it’s still nice to bake them instead of fry them. Arrowroot starch will give them this crispness you usually find on a crispy French fry, the sort of crispy coating you might see at a restaurant, but without using flour. These will give you the feeling like you’re getting away with something, but really you’re totally following the Paleo diet, just doing it in a way that isn’t painful.

3. Spicy Sweet Potato Fries
One way to make fries taste better is to kick them up a notch in the spice department. These sweet potato fries have been given a good dose of red pepper flakes so you know for sure that they’re going to get your taste buds going. There’s even a spicy mayonnaise to dip them in, and you can follow a Paleo mayonnaise recipe in order to make sure that you’re using the right type of oil and eggs so that you can enjoy them guilt free. This is one recipe that will challenge what you know about sweet potato fries. 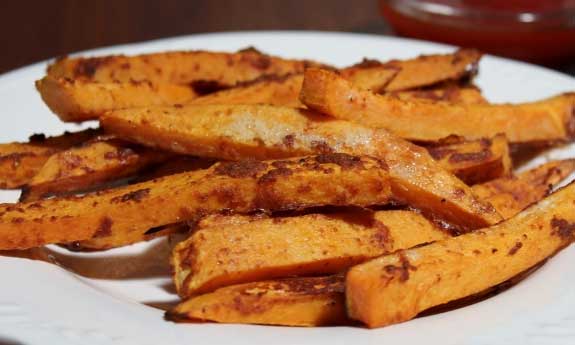 4. Baked Sweet Potato Fries
Here’s a baked sweet potato fry recipe that uses just the right spice mixture to bring out the flavor of the sweet potato so you get maximum enjoyment. Paprika and garlic pepper combine along with salt and pepper to make these taste great. Baking them is a quick and easy way to get French fries without having to deep fry them and add a bunch of oil to them. They’ll still come out nice and crispy, but they won’t be greasy, and you’ll feel better after eating them. Food shouldn’t weigh you down, and a meal should leave you feeling satisfied and ready to carry on with your day, rather than sluggish and comatose.

5. Savory Sweet Potato Fries
Savory is one flavor that you definitely don’t have to give up while doing Paleo. These sweet potato fries are made in a way that will satisfy your savory craving as a snack, and also so that you can pair them up with other savory items like a steak or a piece of chicken, and they’ll go great. Paleo is all about a mix of vegetables and meat, so cooking these fries up as the accompaniment of a meat serving is a great idea. White potatoes aren’t allowed on Paleo, so it’s a good idea to start using sweet potatoes in their stead so that you can get the same sort of texture and kick any potato craving you might be having.

6. Cinnamon Sweet Potato Fries
By adding a bit of cinnamon to the mix you’ve got quite a treat, and these sweet potatoes will be good for you, but also very yummy. You may not have thought of fries as a dessert, or something that you could use in place of a dessert. But because of their natural sweetness, when you put something like cinnamon on them there’s really nothing stopping you from using these to fix any sweet cravings you may be having. Sweet and savory is a great mix that will leave you feeling satisfied for quite some time so you can use these whenever the need arises. It’s great to be able to have a dessert option like this that doesn’t use any sugar or add to your fat total for the day, not like we’re counting fat grams or anything.

7. Old Bay Sweet Potato Fries
This recipe is using a specific type of seasoning, Old Bay seasoning by McCormick, which consists of a blend of different spices that go really well with sweet potatoes. It’s a quick fix if you don’t want to be bothered with coming up with your own mix of spices for your sweet potato fries. Mustard, paprika, and celery salt are just some of the spices included, along with bay leaves, red pepper, cardamom, and ginger, so as you can see it packs a bit of a punch and uses items that on their own have a pretty powerful taste. The result is that it gives these fries a taste that makes it seem like you pondered the recipe all day long, but you can keep it a secret that it comes from a shaker.