Stuffed peppers are one of the meals you’ll want to turn to again and again while eating Paleo because they insure you’re getting enough vegetables along with your meat. It’s easy enough to come up with yummy meat options each day, but can be a bit trickier keeping the veggies interesting enough to make you want to eat them. Here’s the best of both worlds so you don’t have to worry about ratios. 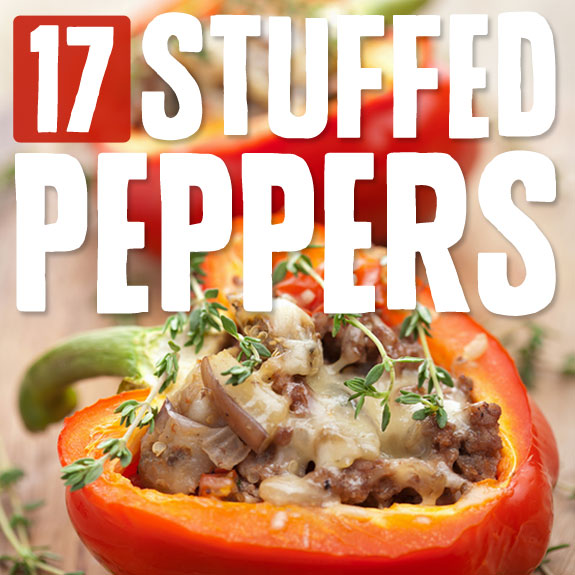 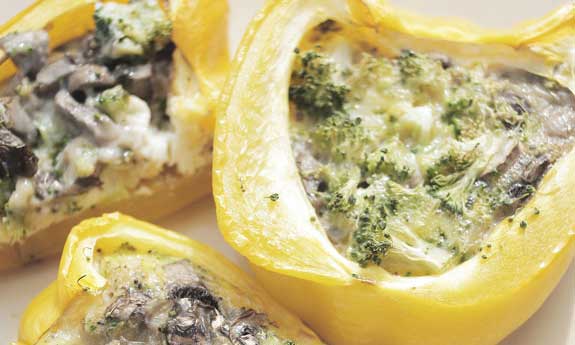 1. Paleo Stuffed Breakfast Peppers
Here’s a way to get your day off to a good start, with a delicious mix of eggs and vegetables all tucked into a bell pepper. In the morning, a breakfast with a lot of meat can weigh you down, so it’s nice to go with the something a bit lighter. The eggs will give you the protein your body needs to power you through until lunch, and the broccoli and mushrooms provide vitamins and minerals that help you stay healthy. She lets you pick which color pepper you want to use, and each color will bring with it a slightly different taste so you can customize this to what you like.

2. Picadillo Stuffed Peppers
You’re sure to get filled up from these peppers, since they’re loaded with plenty of meaty goodness. Notice the attention to detail here as they are suggesting you use grass-fed ground beef to more closely mimic the type of feed animals would get in the wild. All of the other ingredients they’re using are Paleo friendly as well, so you can enjoy these with zero guilt. Just be sure to use raisins that don’t contain added sugar, as these are a great idea in stuffed peppers, but you don’t want any artificially sweetened ingredients.

3. Steak & Cheese Stuffed Peppers
This is like getting a Philly steak sandwich, only it’s been stuffed inside a pepper. And since grilled peppers are part of a Philly steak sandwich it goes quite nicely here. They’re also using sauted onions and mushrooms, so you’re getting the full experience, minus the bread of course because that wouldn’t be Paleo style. The cheese they’re using is provolone, so if you know that your body doesn’t process this very well, you may want to take a pass, or use a cheese or cheese substitute that you know you can handle. Visit the vegan and vegetarian aisle for dairy-free cheeses that actually taste pretty good.

4. Sweet Pepper Poppers
If the larger sized peppers are a deal breaker for you, try these mini-peppers that have a sweet flavor and still pack yummy things inside like cheese and bacon. They’re using goat cheese, which many Paleo followers find more suitable than eating cheese made from cow’s milk. It’s true that goat’s milk is often better tolerated by those with lactose intolerance issues, and when you consider all of the antibiotics and chemicals that are used in conventional cows it seems goat cheese may be a better option. There’s also scallions and chili flakes used so you won’t be short on flavor with these.

5. Spicy Seafood Stuffed Peppers
You don’t often see seafood as stuffing for stuffed peppers, so this is a standout recipe. What’s most interesting is that they’re repurposing fish chili, and they tell you how it was made so that you can enjoy that as well if it suits you. They added to the chili to round out this stuffing by adding prawns and other ingredients, so you’ll get a rich spectrum of flavors all encased by the peppers. Seafood factors into the Paleo diet and it something you’ll want to eat more of if you don’t already eat it regularly.

6. Paleo Pizza Stuffed Bell Peppers
If you usually get peppers on your pizza, why not stuff a pizza into a pepper? That’s the concept here, as it’s bringing the fantastic taste of pizza to a pepper near you. No worries on whether the pizza crust is Paleo or not, as there is no crust. Enjoy classic pizza toppings like black olives, mushrooms, Italian sausage, and onions, or add your own favorites. The great thing about this is the way you can customize it to re-create your ideal pizza situation while keeping it healthy by keeping it Paleo.

7. Italian Sausage, Spinach and Sun-dried Tomato Stuffed Bell Peppers
One thing you’ll notice when you start eating Paleo and following Paleo recipes is that they have a theme of using pure and natural ingredients. This is on display with these stuffed peppers, which has you using organic peppers, and making sure that your sausage is free of fillers, even telling you to avoid them and what to look for at the grocery store. They also use organic spinach, which is important because spinach is very absorbent and soaks up chemicals easily. They point out that the use of cheese is optional.

8. Stuffed Peppers with Cauliflower, Spinach & Ground Beef
This is a simple but delicious recipe for stuffed peppers that follows along with the Paleo way of eating. You have several different options for the meat, and what’s pictured is ground beef. You can also opt for ground lamb or ground buffalo if you want to change things up. The more wild an animal is, the more Paleo it is, and the less processed it’s going to be. Since the cattle industry has been around for so long, today’s beef is full of hormones and additives, which is why you want to go grass-fed and organic whenever you can. 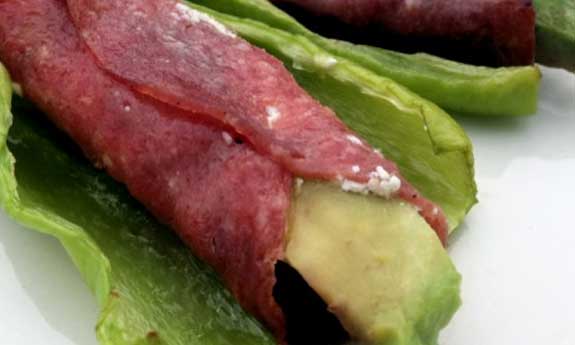 9. Salami Stuffed Banana Peppers
When you’re looking for a bit more spice than what bell peppers can provide, but still want the stuffed pepper feel, give these stuffed banana peppers a try. They’ll give you more of a kick, and in this recipe they go nicely with salami. As you’ll discover when using this recipe they recommend using an uncured salami, and that is good advice for Paleo eaters. The less processed a meat is, the better, and in this case going uncured means you’ll end up with less sodium and nitrates. Go with the avocado instead of the cream cheese to keep this totally Paleo, and make it better for you.

10. Peppers Stuffed with Curried Beef
These stuffed peppers will give you the delicious taste of curry in a nice pepper package. They’re using hot curry powder here, and that will definitely wake up your senses. But play to your palate here, and if you don’t like spicy foods be sure to go with a medium or mild curry. You’ll still end up with a tasty meal, and this is using ingredients that are Paleo approved. The key to this dish is that there are so many seasonings and spices in addition to the curry powder that it’s a flavor overload, and not just reduced to a curry flavor alone.

11. Chicken Stuffed Bell Peppers
It’s nice to see some chicken being used in these stuffed peppers, as beef usually gets the go-ahead. They’ve kept the ratio of meat to vegetables at just about half here, so you’re getting a good portion of each.It’s interesting that they decided to use zucchini in this, seeing how there’s already so much vegetable in the form of a pepper. Out of all of the recipes we’ve found this one is perhaps closest to a traditional stuffed pepper recipe, but with chicken. It would be a good recipe to serve to friends that aren’t Paleo followers, as it contains many of the same elements, but without the rice.

12. Grill-Roasted Liver-Stuffed Peppers and Mushrooms
Organ meats are something you might have to get used to because they’re a meat option on Paleo that shouldn’t be overlooked. Chicken livers have more minerals in it than ordinary chicken so your body is getting more of what it needs with each bite. When you find a recipe like this that uses liver but makes it palatable by using things like bacon, thyme, and dill, you’ve got a winner. Notice how they’re using sugar-free and nitrate-free bacon. Paleo is all about going out of your way to use the most natural ingredients you can. 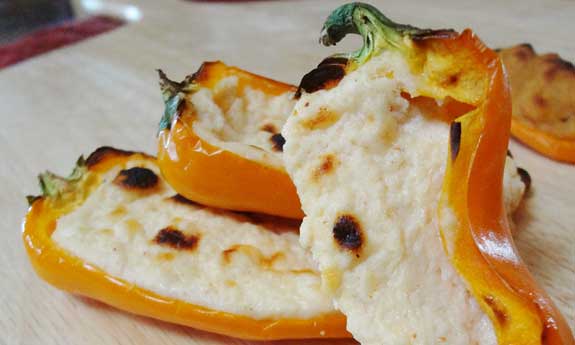 13. Stuffed Baby Sweet Peppers
Here is a sweet pepper recipe that you won’t soon forget. She shows you how to make them two different ways, and there’s one style for those that can process dairy with no problems, and another style for those that would rather keep their dairy intake to a minimum. The cheesy style uses goat cheese as well as ricotta. Goat cheese might be more tolerable for some than the ricotta. The other style uses hummus as a filler, which you can replace using Paleo friendly hummus made out of cashews, or try using roasted eggplant that you puree in a blender or food processor. There’s always a workaround when going Paleo!

14. Mexican Pulled Chicken Stuffed Peppers
If you love the taste of pulled chicken sandwich, or just love Mexican flavors, these peppers are likely to be your new favorite. The use of jalapenos is going to provide a bit of heat to these, and the chicken breast gets simmered in a Crock Pot with delicious spices and ingredients to come out packed with flavor. The great part about this is you can leave it to cook while you’re at work, and when you get home you simply stuff the peppers, bake for 20 minutes and dinner is served with no need for a side dish.

15. Tuna Stuffed Peppers
This is the only other pepper on our list that uses fish instead of beef or chicken. Tuna makes a great choice because it’s something early man would have eaten, as homo sapiens have always been adept at catching fish. That said, you’ll want to keep your tuna consumption to a few times a week due to concerns about the mercury it contains. Opt for the albacore variety to make sure you’re getting a better quality of protein. They’ve done a good job of making this taste like stuffed peppers, only with tuna subbing in as the meat source.

16. Elk Sausage, Feta and Zucchini Stuffed Bell Peppers
If you’ve never branched out of the pork sausage variety, this may be the recipe to start trying new things. Wild game is highly encouraged on Paleo, since it is as close as we can get to our roots in today’s modern age. Putting elk into sausage form means that you’re getting a healthier cut of meat than most pork products you’ll find these days. The use of different vegetables and seasonings makes this taste great, and you’ll likely forget that it’s elk you’re using.

17. Chorizo Stuffed Mini Bell Peppers
The chorizo is going to give these peppers a nice spiciness, while the peppers themselves are going to be relatively sweet. That makes for a nice flavor combination, and perhaps the best part of this recipe is its brevity. You’re basically tasked with getting the chorizo into the peppers, and baking as indicated. Keeping it simple is part of the Paleo philosophy, so there’s no need to overcomplicate things, especially when the chorizo has already been infused with seasoning.