Spaghetti squash is one versatile and tasty vegetable, and you’ll want to get on a first name basis with it while you’re doing the Paleo thing. That’s because it can serve as suitable substitute for noodles in a pasta recipe, and has just the right consistency to go into a casserole. The possibilities are truly endless, and we’ll hint at those possibilities with this sampling of some of the best Paleo spaghetti squash recipes we could find. Once you see how great it works in a variety of recipes you’ll be inspired to branch out and make your own creations. When you do we hope you’ll share them with us. 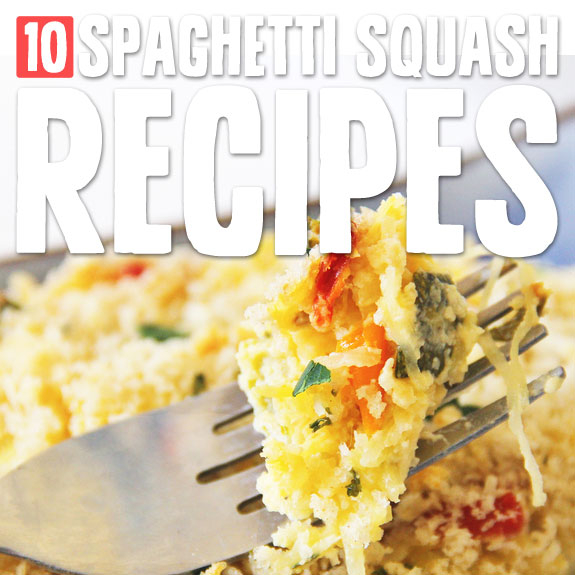 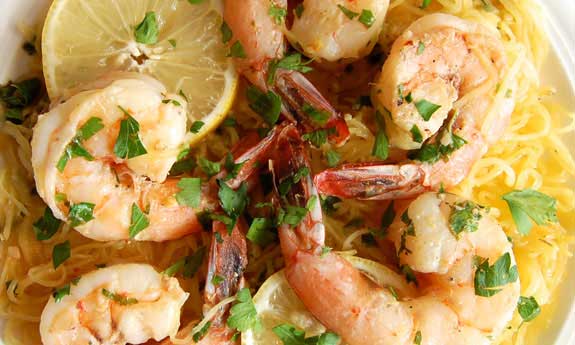 1. Spaghetti Squash Shrimp Scampi
Is there anything better than the buttery taste of shrimp scampi? If there is we don’t want to know about it. Here Rebecca takes us to the edge of reason with her delectable shrimp scampi recipe served on a bed of spaghetti made from spaghetti squash. Like all Paleo Grubs recipes it uses only Paleo friendly ingredients, and tries to keep the cooking steps easy-to-follow.

2. Paleo Chicken Pad Thai
Pad Thai gets the kibosh on Paleo mostly because of the noodles. Fix the glitch with this Paleo chicken Pad Thai that uses spaghetti squash as the noodle, and uses only Paleo friendly ingredients for the rest. Enjoy classic Pad Thai toppings like bean sprouts, which depending on who you ask are or aren’t Paleo, cilantro, and lime wedges. You can’t sprinkle crushed peanuts on it, but how about some almonds? If you get creative enough you can find a way to make your favorite dishes according to Paleo guidelines.

3. Spaghetti Squash with Cilantro Macadamia Pesto
This recipe takes full advantage of all the things you can have on Paleo, rather than lament at the things you can’t have. The first thing that stands out for us is that they’re using spaghetti squash where you’d usually find a big pile of noodles. But perhaps what steals the show is the use of macadamia nuts to make a pesto. Macadamia nuts have a undue bad reputation because of their fat content. But on Paleo you have to check where those fats are coming from, and with macadamias it’s plenty of healthy fat along with some saturated fat. It’s also high in calories, but counting calories is definitely not Paleo! 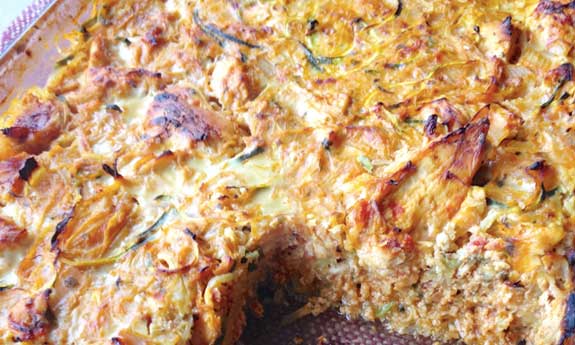 4. Chicken Spaghetti Squash Pizza Pie
Since calling the local pizza place is likely not an option, many Paleo eaters are always on the lookout for a good recipe that brings pizza flavor without a wheat-packed crust and gobs of cheese smothered over it. This pizza pie is more of a casserole and includes plenty of vegetables and meat to make a well-balanced Paleo meal, hold the guilt. In addition to the spaghetti squash, it also includes a “zoodled” zucchini for even more veggie power. The pizza flavor comes from pizza sauce and plenty of Italian seasoning, so you will feel satisfied after eating this, more so than if you had just chicken and vegetables.

5. Crispy Noodle Pancake
Here’s a crispy noodle pancake that doesn’t include any noodles at all. Instead you’ll be getting a vegetable serving, making this a perfect pairing with any meat dish to round things out and help you reach your 1:1 ratio of meat to veggies you want to follow. One serving suggestion they show is having eggs with it, and that will taste good too, since this will be akin to a batch of hash browns. The crispy flavor is what is going to hook most Paleo eaters, since crispiness is not something you’ll typically find in most Paleo foods. Buttery crisp squash thanks to the ghee means you’ll gobble this pancake up.

6. Spaghetti Squash Casserole
Casseroles are a great way to feed a lot of people with one dish, and they’re easy to make and involve little babysitting. This casserole uses spaghetti squash as a base, which is a great idea because it has just the right texture for a casserole. The next big contributor is grass-fed beef, which puts you right in line with the Paleo balance of meat and vegetables. This is going to give the casserole a nice heartiness to it, and on a cold winter’s day nothing will put you back on track better than a generous piece of this. The great part is you don’t need to make anything else to go with it. 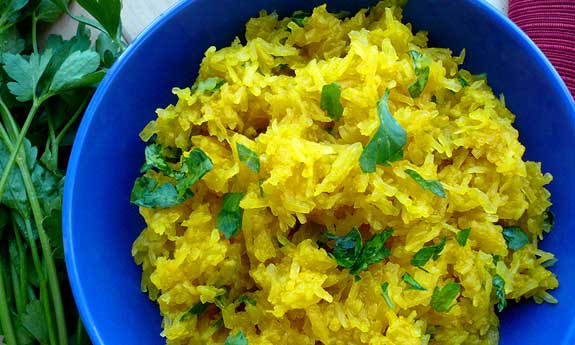 7. Simple Spiced Spaghetti Squash
Keeping it simple is one way to make sure that the dish you’re making is a Paleo approved recipe. What caught our eye with this recipe is that it only uses a handful of ingredients, but manages to pack tons of flavor in a side dish. The spice mix they’ve chosen is full of seasonings that go great with spaghetti squash. Spaghetti squash has a delicate flavor, and easily takes on the other ingredients you use with it. So when you add things like turmeric and cayenne those flavors are going to take on a dominant role.

8. Spaghetti Squash Alfredo
Alfredo is one of the yummier pasta options out there, but most diet plans won’t let you have it because of its high fat content. On Paleo as long as you get rid of the unhealthy ingredients it’s not much of a concern how much fat a dish has. Here the spaghetti squash replaces the fettucine that is typically used in an alfredo dish. The creamy alfredo sauce has gotten a Paleo makeover with full-fat coconut milk, so there’s no dairy. They’ve even added an entire zucchini so this is packed with vegetables. It’s sure to satisfy as-is, or add chicken for a special meal indeed.

9. Tomato Basil Spaghetti Squash
Turkey is one meat that you can eat on Paleo, and they’re using it here in sausage form. It combines with the time-tested combination of tomatoes and basil, so you know this is going to have a classic taste without damaging your system. The best part is that because of the way this combines vegetables and meat it should have you feeling satisfied for hours after you eat it. 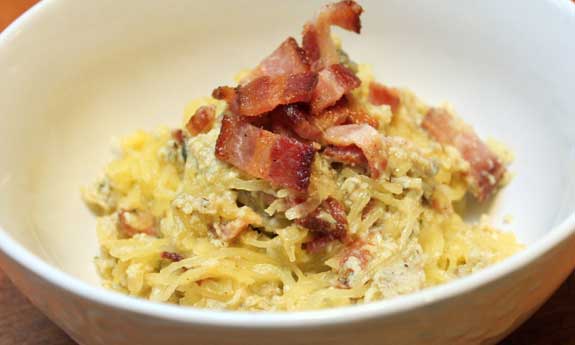 10. Spaghetti Squash alla Carbonara
This is one way to get your spaghetti on the Paleo diet, and if carbonara is the way you like to enjoy it, you’re all set. The basic structure of a carbonara recipe is intact here, they’ve deftly replaced the noodles with spaghetti squash replicas so you don’t have to feel bad while you eat it. One theory for why most diets fail is that people feel lousy when they eat the foods on the diet, and they feel even worse when they “cheat” or go off the authorized food list. The great thing about Paleo is that you feel good when you eat the foods it recommends, and don’t have to stress so much about going off track.