If you’ve been missing spaghetti because you thought you couldn’t have it while on Paleo, try out these spaghetti recipes for that classic taste without the actual noodles. Each recipe takes a slightly different route to deliver maximum flavor without any grains or refined sugar in the sauce. There are enough recipes here to have spaghetti every night for two weeks straight and never have the same style twice. But surely you’ll want to mix them up with all of the other awesome Paleo foods there are to enjoy, we’re just sayin’. 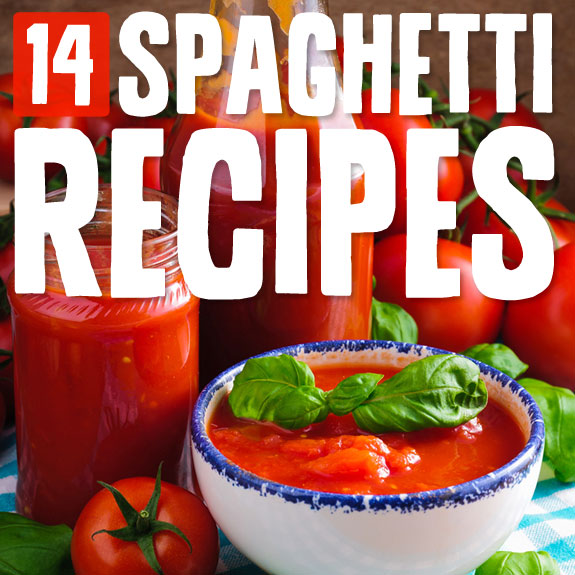 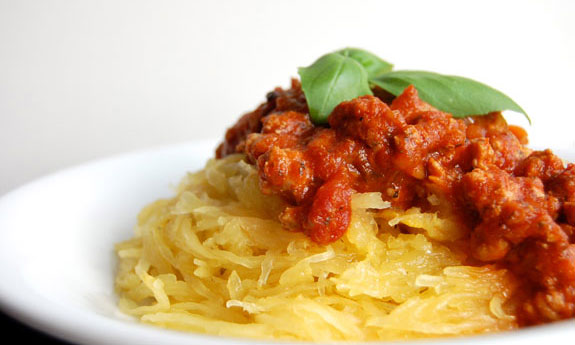 1. Spaghetti with Meat Sauce
Spaghetti squash is aptly named because a bit of scraping with a fork and it shreds right into strips that are very spaghetti-like. Rebecca walks you through the steps on how to make a basic Paleo spaghetti and meat sauce using ground beef or ground turkey. Be sure beef is grass-fed and the turkey is organic so you stay as in line with the Paleo system as you can. The end result is a dish that looks like the original, and tastes like the original, without the need for all of that pasta. Paleo is mostly about making healthy adjustments rather than cutting things out completely.

2. Buffalo Shrimp and Spaghetti
Here’s a way to get the spicy kick of buffalo sauce along with your spaghetti. In this instance they’re using shrimp, but you could easily make this buffalo chicken spaghetti by subbing in chicken for the shrimp. The spaghetti is made from a roasted spaghetti squash, keeping it well within the Paleo approved recipes list. One interesting feature you’ll see here is that she’s actually using bacon grease as part of the recipe. You’ll see things on the Paleo diet that you just won’t see on any other diet plan, even things that are shunned on other diets.

3. Chicken Spaghetti
This chicken spaghetti is sure to make your regular line-up of foods, which it’s nice to have a list of recipes that you love and just make them up whenever you’re in need of a meal. That beats wondering what you’re going to eat every time you get hungry. They’re also using spaghetti squash here, and it’s easily the most popular spaghetti noodle replacement. Depending on how involved you want to get in the process you can try to make longer strips so it really looks like spaghetti, or you can go faster and get smaller pieces that will still fill in well. 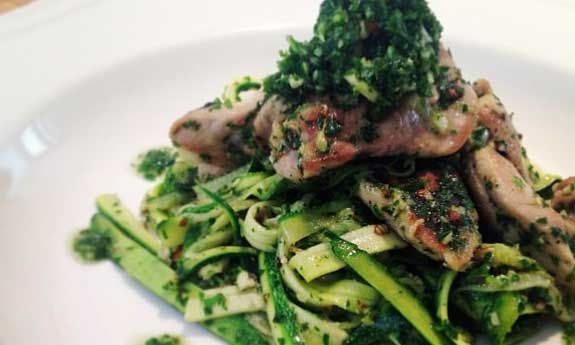 4. Paleo Spaghetti with Kale Pesto
Pesto is a great change of pace when you want to have spaghetti, but you don’t necessarily want to have a tomato-based spaghetti sauce with it. They’ve made this pesto using kale, which is not the traditional way to make it, and is actually a healthier form of pesto than the regular way of making it. So not only are you avoiding all of that wheat by not eating pasta, you’re also getting a nice assortment of vitamins, minerals, fiber, protein and more from the kale. They’ve topped it off with free-range chicken thighs so you’re getting a complete Paleo meal with vegetables and meat in equal portions.

5. Spaghetti Alfredo
If you’re in the mood for alfredo this is the place to go. Normally alfredo isn’t allowed on a diet plan because it’s cream-based and full of butter and therefore too fatty. On Paleo we’re not concerned with the fat content, but the dairy has to go. In this alfredo recipe she’s done a good job of cutting out both the gluten and the dairy, using spaghetti squash to replace the noodles, and coconut milk to give it the creaminess you expect from alfredo, without the dairy that will muck up your system. Add an organic chicken breast to this and you’ll have chicken alfredo and a more balanced Paleo meal.

6. “Spaghetti” Bolognese
Spaghetti Bolognese is one of the more popular spaghetti dishes, and one that you can truly enjoy while on Paleo as long as you fix the pasta problem. Here they’re suggesting you choose between zucchini noodles, spaghetti squash, or sweet potato noodles. The bolognese sauce recipe is pure gold, and even makes the cheese optional so it’s very easy to keep this Paleo. Imagine a full meal that you can enjoy without worrying about what effect it’s going to have on your waistline. On top of that but all of the ingredients here move you toward your goal rather than away from it. 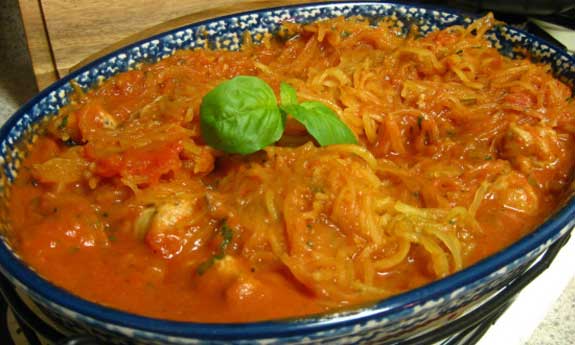 7. Spaghetti with Creamy Basil Marinara
Sometimes you just get in the mood for a nice creamy spaghetti sauce, and on Paleo you can totally have one, you just have to make it without using cream or cheese. That’s where full-fat coconut milk comes in. Coconut milk is dairy free, and on Paleo fat is not something you keep track of, so you can enjoy this creamy marinara sauce without concern that it’s bad for you. The heavy use of basil means that it’s going to be laden with classic flavor, and the spaghetti squash earns its name by producing a spaghetti-ish form of pasta.

8. Twice-Baked Meat Sauce Spaghetti
The presentation on this spaghetti is truly awesome, and she’s serving it up in the actual squash that provides the spaghetti strings. She shows you how to make the sauce but also points out that you can speed things along by using prepared organic pasta sauce without losing much in regards to taste. Making the squash boat to serve this in is as easy as cutting it in half and scooping it out while making the spaghetti. The fact that it is twice baked not only gives it a flashier title, but also adds to the taste considerably.

9. Spicy Garlic Chicken Spaghetti
Fans of the Spicy Garlic sauce from Buffalo Wild Wings will want to try out this spicy garlic spaghetti whenever they get the craving. It is made with chicken breast, garlic of course, and red pepper flakes to turn up the heat. You can adjust the pepper flakes according to your taste, making it only slightly spicy if you want to taste the other ingredients, or really spicy if you want to bring the pain. There are also mushrooms added, so you’re getting a host of different healthy foods all in one meal. 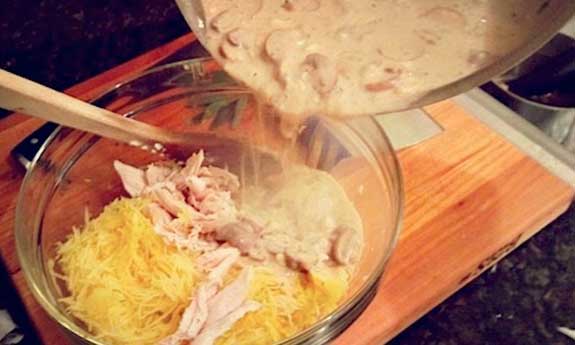 10. Creamy Mushroom Sage Spaghetti
This recipe provides a gourmet caliber pasta dish that you can feel confident serving to guests, your partner, or just to impress yourself. The creaminess it has comes from coconut milk and plenty of butter insures that it’s going to taste devilishly good. The spaghetti is produced from spaghetti squash, a recurring theme in Paleo spaghettis. The great part about this recipe is the use of equal parts chicken and vegetables so you get a balanced meal without having to cook up any supplemental sides.

11. Turkey Spaghetti
Turkey is one meat that you’ll likely be eating a lot of on Paleo, you just want to make sure that you’re eating real roasted turkey, and not the processed cold cuts found in the deli. This recipe has you using ground turkey, just make sure that it’s organic and you’re all set. It provides the same heartiness as ground beef, as well as plenty of protein and other important minerals. Humans can’t survive on beef alone, so it’s good to mix things up with chicken, turkey, and pork so that you’re eating a varied diet. The inclusion of spaghetti squash means this is perfectly balanced for Paleo.

12. Creamy Pumpkin Pasta
A great-tasting spaghetti recipe for the fall months, or any time of year, this pumpkin pasta will warm you up and have you feeling good on cold days. They’ve used Italian sausage for the meat, and between the pumpkin and the squash used for the spaghetti you’re all set on your vegetables for this meal. The one thing many people don’t realize is that eating Paleo involves just as much veggies as it is meat. It’s meant to mimic the hunter-gatherer lifestyle and many forget about the gathering part. 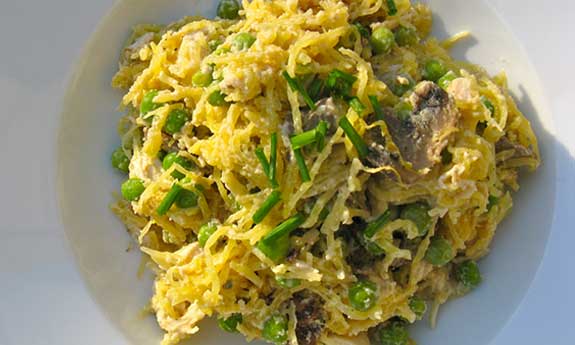 13. Turkey Tetrazzini
One thing you’ll immediately start to notice once you begin with Paleo is how traditional recipes are flawed. For example, a traditional tetrazzini recipe is doing just fine with items like butter, chicken, onions, mushrooms, and garlic, but then they have to go and add all-purpose flour, milk, cream, and breadcrumbs, all of which will not do your body any favors. This turkey tetrazzini fixes those glitches but still provides a classic taste thanks to coconut flour instead of all-purpose flour, and coconut milk instead of cow’s milk and cream. Awesome!

14. Zucchini Spaghetti with Crawfish Tails & Garlic Sauce
Go Cajun style with this tasty spaghetti dish that uses crawfish tails and plenty of Cajun spices and seasonings. The end result is claimed to be a dish worthy of a 5 star restaurant, and it’s important to remember that when you started Paleo you didn’t forfeit your right to a fancy meal. You can cook up award-winning dishes without using ingredients that cause your digestive system trouble. And you can present them in a way that makes them look really delicious, and gourmet. This is one Cajun meal that is sure to satisfy on all levels.