My slow cooker chicken and gravy is comfort food at its finest. All you need is a Crock Pot and some basic ingredients and you’ll soon have a complete dinner on your hands. 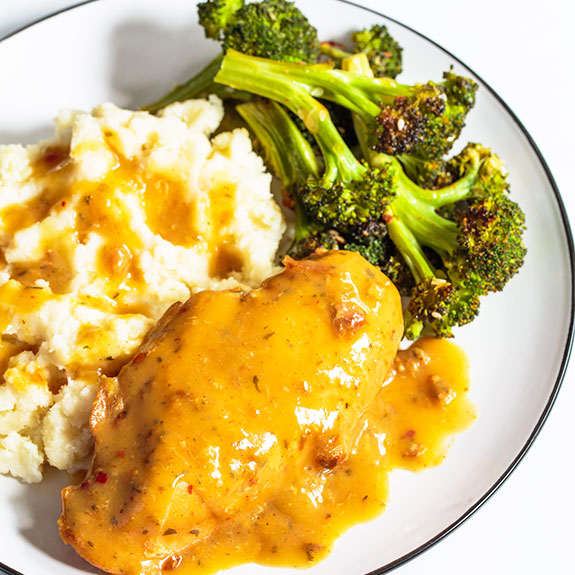 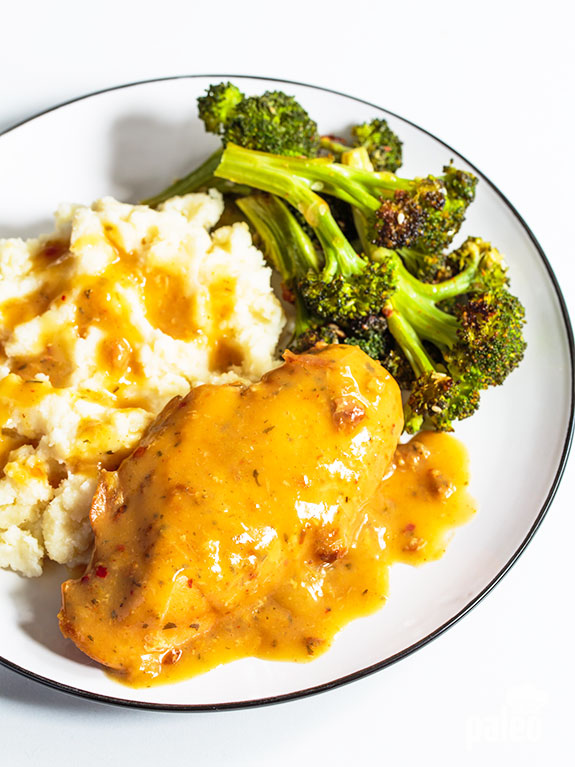 Fall always makes me want to create rich, hearty, warming dishes. The kind that cook for hours and make the house smell wonderful. Thick soups and meaty stews have always been my favorite and every time I bake a chicken, I make homemade chicken soup from the leftovers: simple and infinitely better than the canned stuff. And it keeps forever in the freezer. So when fall rolls around, I use that chicken soup for the base of all sorts of yummy dishes.

This chicken and gravy recipe is one of my favorites. If you know anything about making gravy, it generally contains three basic elements: fat, warm liquid, and a thickener. You warm the fat, whisk in the thickener – almost always flour – and whisk that mixture into the liquid, usually a broth of some sort, which brings more flavor to the party. 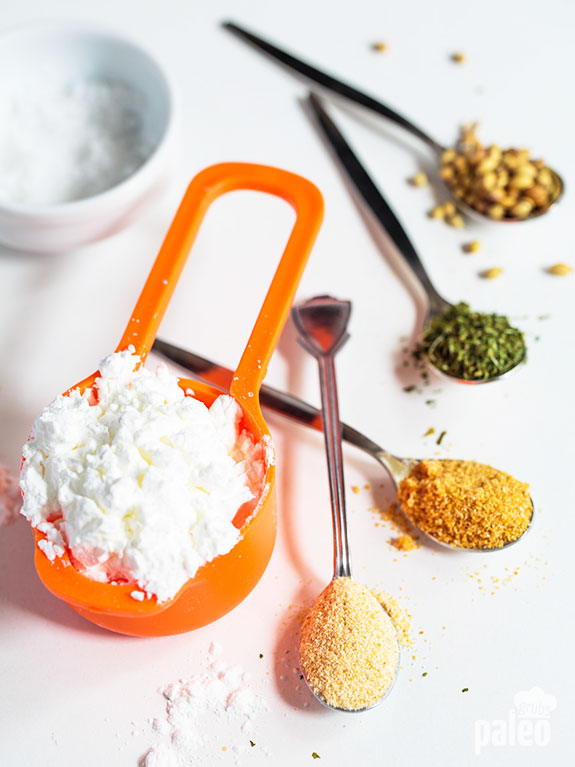 With this recipe, I use chicken soup as my liquid (plenty of flavor there already) and skip the fat. The soup has some already and really, the fat is mostly for flavor. So, the extra herbs and flavorings fill that niche. Then, since I want to keep my meals as Paleo as possible, instead of wheat flour, I use arrowroot flour. 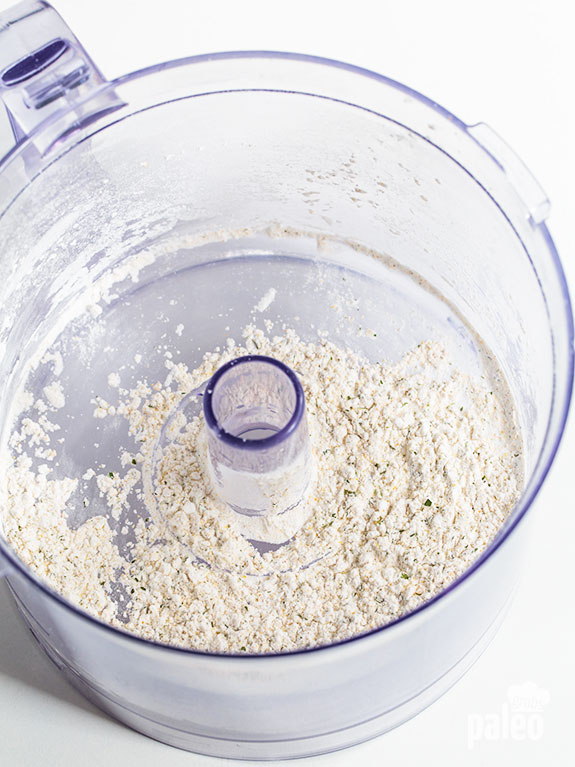 Arrowroot looks a lot like a carrot with all the color sucked out (anyone else read Bunnicula as a kid? The vampire bunny who sucked all the color out of carrots?). It comes mainly from South America, where it has been a staple starch for thousands of years, but it’s also found in Chinese cuisine (and, accordingly, Asian grocery stores) and may be called “Chinese potato.”

While you can extract your own powder from a whole arrowroot, it’s easier to just buy the powder. Frankly, the powder is probably also easier to find than the whole vegetable anyway. However, when you buy the powder, do check to make sure that it’s 100% arrowroot. Some manufacturers add other starches, and that’s not what you want. 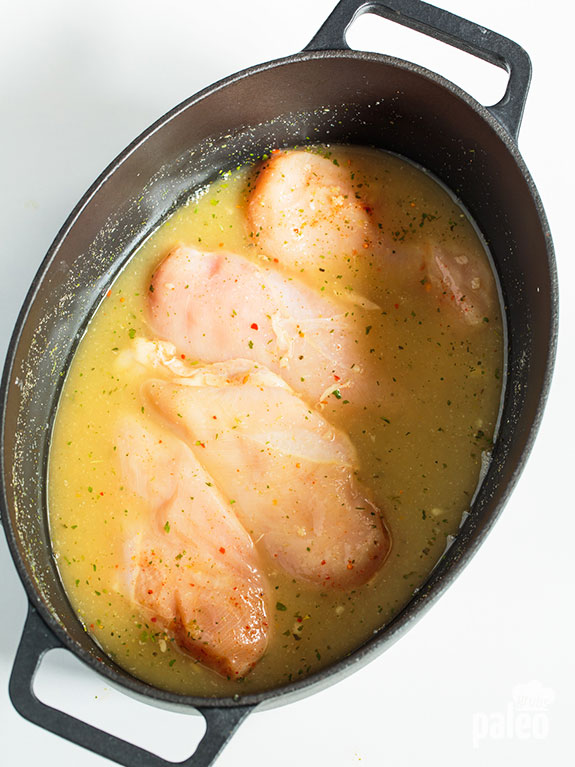 Why is this starch better than wheat as a thickener? Well, arrowroot has been around a lot longer than wheat – it grows naturally – and is way easier to digest than a lot of other processed starches. Like with many Paleo choices, it comes down to making the better choice. And that’s arrowroot.

The great part is that arrowroot is almost totally without flavor so it won’t change the flavor of what you are making. And it will still help your dish to set up and give your gravy the creamy, thick texture you want in a hearty chicken and gravy dish. 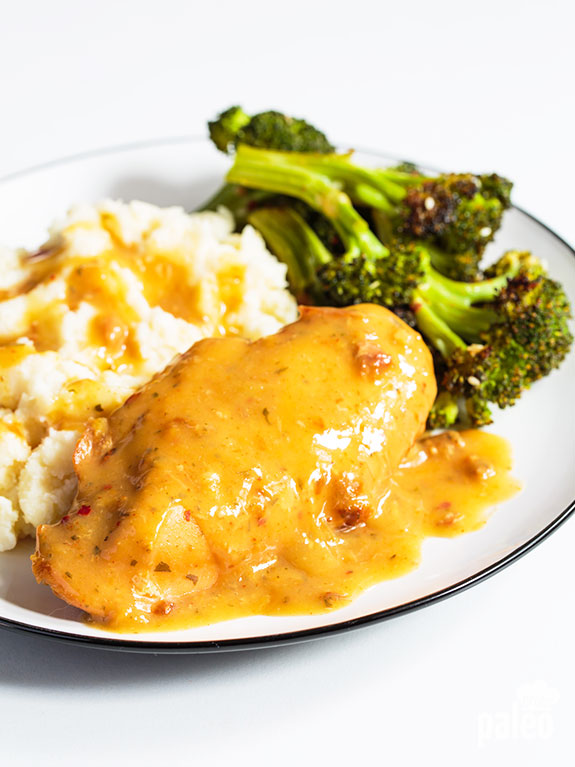 After cooking in liquid for 8 hours, you chicken will be so tender it will practically fall apart. The herbs and spices will blend together into the rich broth and you’ll have a warm, hearty, fall dish to die for!