Scotch eggs aren’t really Scottish; but they are a great Paleo dish! A soft or hard boiled egg, encased in pork, flavored with herbs, and given an outside coating of crispy bacon bits, they can be served warm or chilled and are totally packed with protein. Serve with veggies to make a full meal or an assortment of pickles and mustard for a snack or appetizer. 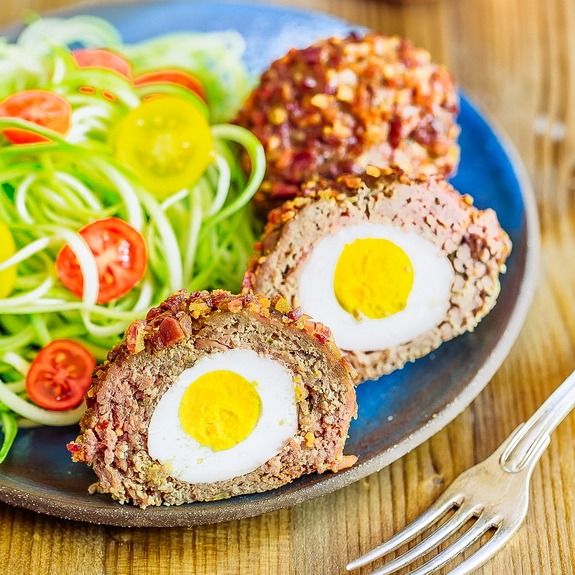 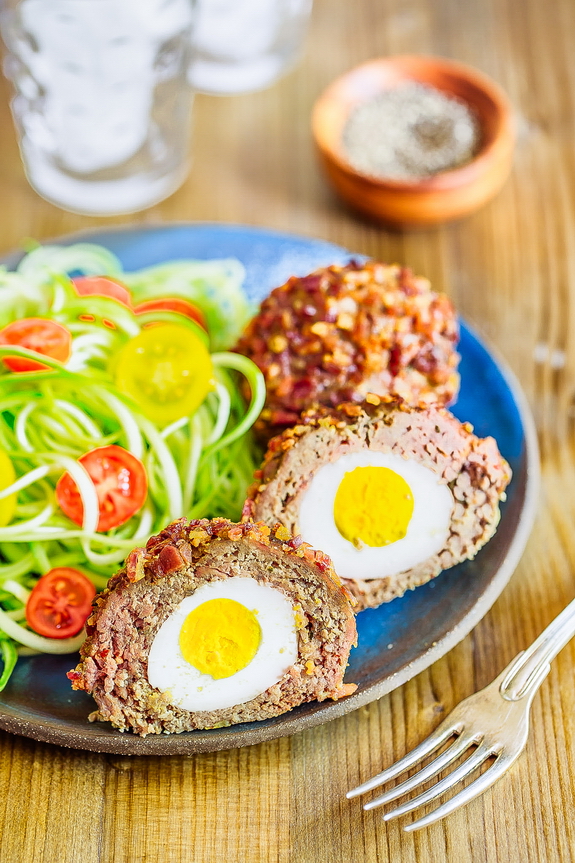 Eggs with bacon. Eggs (green or otherwise) with ham. Steak and eggs. Corned beef and eggs. Whatever your favorite style is, eggs and meat are a classic combo and definitely a hallmark of an All-American Breakfast. But one of the most classic meat and egg combos isn’t American and isn’t traditionally a breakfast food – although I dare say it would make for a great breakfast.

It’s the Scotch Egg: some variation of a cooked egg, encased in meat, and cooked again. It’s Paleo eater’s dream. 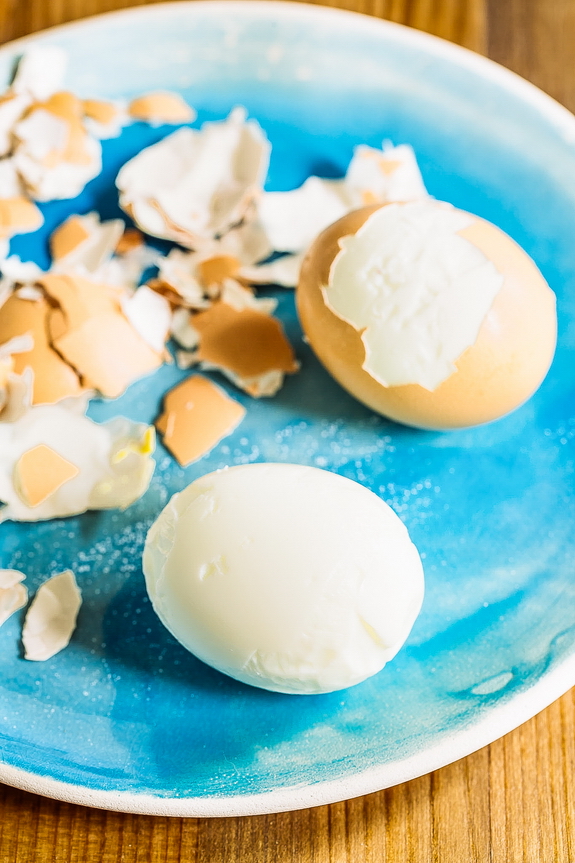 Talk about a protein bomb! A scotch egg is basically a ball of meat and eggs, the size of your fist. While this recipe instructs you to serve them warm, you can actually dig your scotch eggs a number of ways. Many people who make them at home like the egg just a touch runny in the center and the whole thing served warm. But they are also often served as bar snacks and in those cases, they are sometimes served chilled, with a firm yolk. 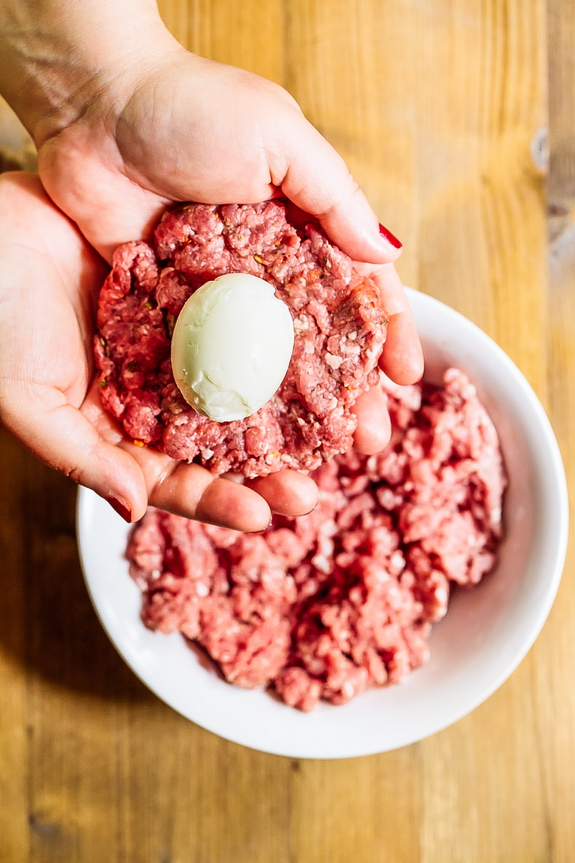 I’ve adapted this idea more than once and used them as an appetizer. After they are cooked and cooled fully, I cut them into bite-sized pieces, put them on a plate, and stick toothpicks in them. Voila – a plate of tasty apps!

Traditional scotch eggs usually come with an outer layer of fried dough or bread crumbs. To keep our scotch eggs Paleo, instead of breadcrumbs, I’ve coated these Scotch eggs with a bit of bacon. That means you still get the nice crispy, crunchy outer shell, but they are still Paleo. As a bonus, you get the extra added flavor of the bacon. Yum! 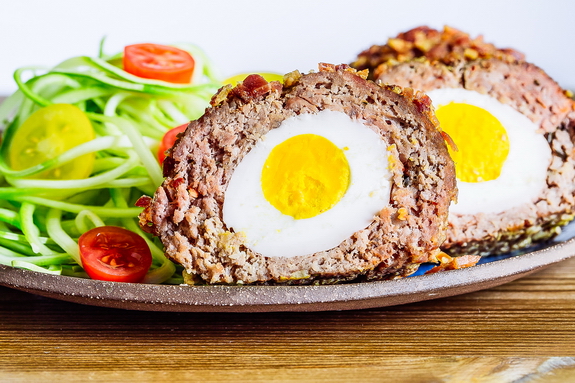 You may notice that I’m not capitalizing “scotch.” It’s not a mistake: these tasty delights actually aren’t Scottish! There’s confusion about where the name came from, but “scotch” may have just implied that something was being done with the egg. And it turns out they are British! Well, maybe. But they’re definitely not Scottish. One London food store claims to have invented them as a handy meal for travelers in the late 1700s. 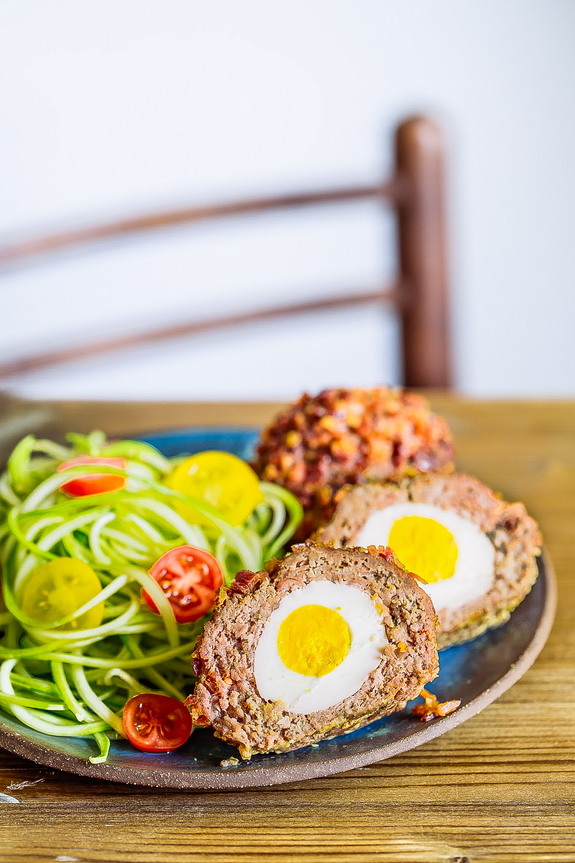 Other sources say they are a riff on an Indian dish that uses egg and meat, transported to England during the peak of British imperialism in the 1800s. Yet other sources say they are an imitation of a North African dish and first appeared in England during Queen Elizabeth I’s reign – in the 1600s! My hunch is that plenty of cultures use both chickens and pigs as food and it’s inevitable that each of these cultures eventually put the two foodstuffs together in one way or another. 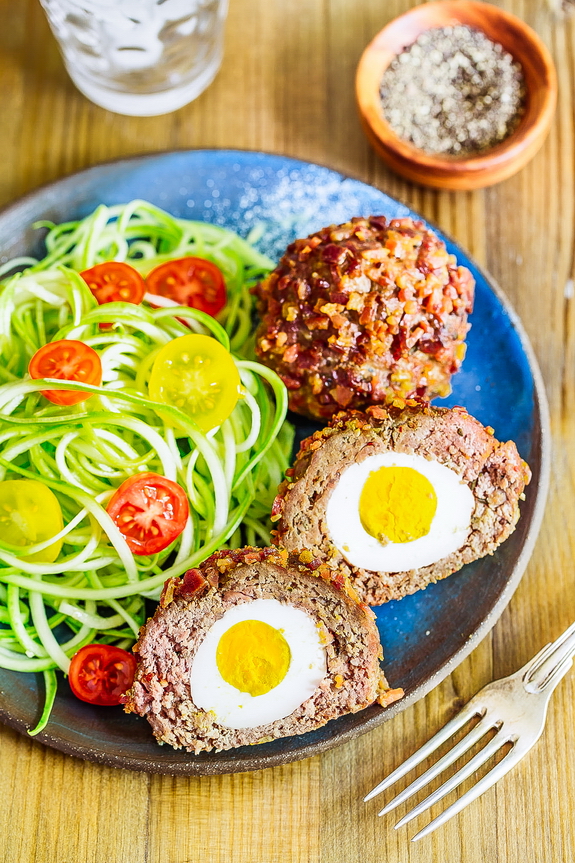 These scotch eggs are pretty rich so if I am eating them as a meal, I pair them with a nice plate of veggies, like the images here show. A spiralized zucchini salad with a light vinaigrette goes really well with them. I also like a little mustard to dip my scotch eggs in. On an appetizer plate, I usually pair them with mustard, homemade mini-pickles, homemade pickled onions, and, if I have non-Paleo guests attending, some hard English cheddar cheese. 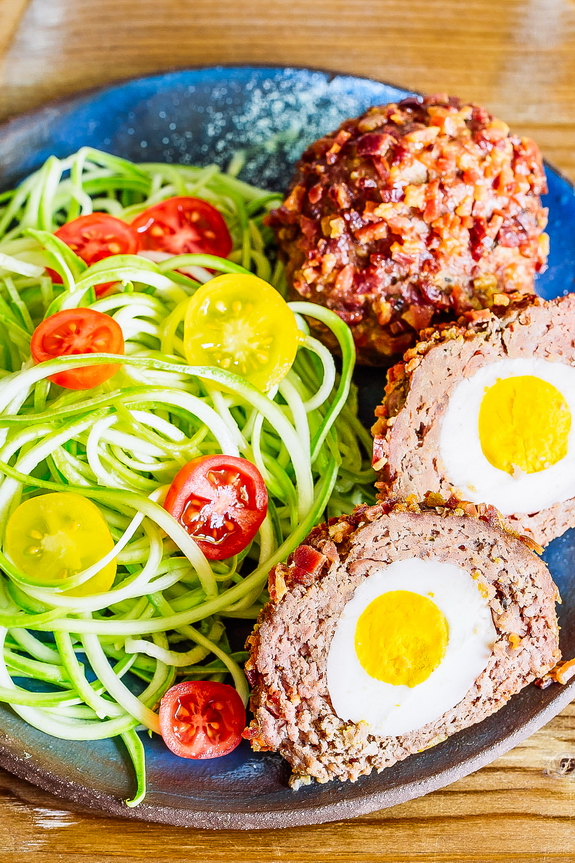 I skip the cheese, but guests seem to love the pairing. As you know if you’ve been reading my blog for a while, you know I love versatile Paleo dishes that I can serve to non-Paleo eaters as well, and this is a good example of that.

So whether you want a warm, filling, protein-packed breakfast, or a take-with-you chilled protein snack for later in the day, these scotch eggs are a great way to go.