If you love quiche you’ll be happy to learn that it’s a food that is easy to make the Paleo way. You can enjoy this as much as you want as long as you prepare it with a crust that doesn’t use any all-purpose flour, and without dairy products like milk and cheese. The recipes below all use Paleo friendly ingredients and stick to Paleo cooking guidelines as much as possible. Cooking any of these will insure a great start to your morning, or can be used as part of a Paleo brunch. 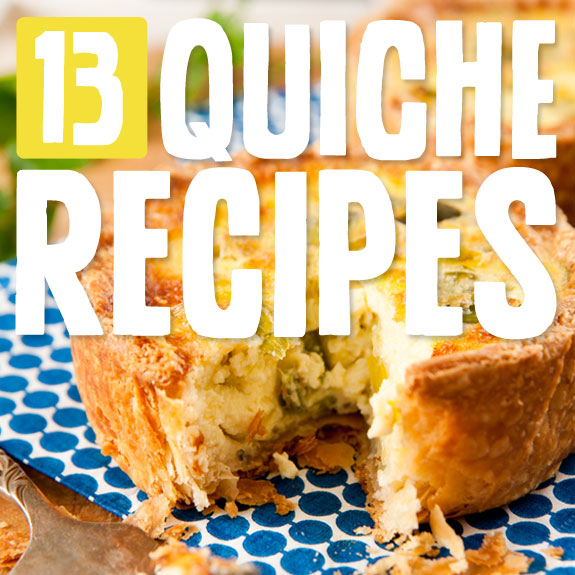 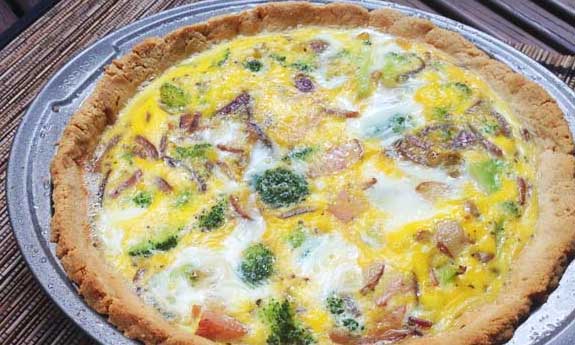 1. Breakfast Quiche with Broccoli and Ham
Quiche for breakfast makes perfect sense because it is mostly made up with eggs, a common breakfast food you’ll find on the Paleo diet. This quiche comes with broccoli and ham, so you’re getting a nice mix of vegetables, meat, and of course the egg. The eggs provide plenty of protein, and broccoli will make sure you’re getting enough fiber in the meal. Ham as the savory taste that it is famous for. For the crust they provide a recipe that uses almond flour, sea salt, coconut oil, and an egg, so you don’t have to worry about consuming any wheat-based flour.

2. Low Carb Crustless Quiche
One way to make sure that the crust is a paleo friendly crust is to get rid of it entirely. This quiche recipe focuses on being low carb, even though we’re not really concerned about counting carbohydrates while doing the Paleo diet. They are using plenty of organic free range eggs, lots of kale and Swiss chard, as well as tomatoes, onions, and a bit of parmesan cheese to make this taste incredible. You can tell they are focusing on high quality ingredients because they are even using organic butter. You want to use the most wholesome and natural ingredients whenever possible while following the Paleo diet.

3. Bacon and Tomato Quiche
You can’t go wrong with bacon while you’re doing the Paleo diet, and you’ll see it added into lots of recipes just because it is one of the foods that is allowed. This quiche recipe is loaded with lots of good things for you including organic zucchini, eggs, almond milk, nitrate free bacon, cauliflower, spinach, and more. It is an eclectic mix of meat and vegetables which is a fitting example of what you should be eating while you are doing the Paleo thing. You’ll notice that they don’t use any all-purpose flour, and they are using coconut flour and flax meal to make up the zucchini hash crust.

4. Sun-Dried Tomato Quiche
Sun dried tomatoes are very good for you and this recipe is centered on using them as one of the main ingredients. It also includes eggs, zucchini, and an onion, as well as regular tomatoes, so you are getting plenty of nutrition packed into this quiche. What’s missing is the dairy that you’ll usually find in a traditionally made quiche. They’re even using coconut oil, one of the oils that is on the approved foods list for the Paleo diet. The preparation instructions on this are pretty straightforward, and it only takes 20 minutes to get it into the oven. Although it does take a bit of time to cook once it is in the oven. 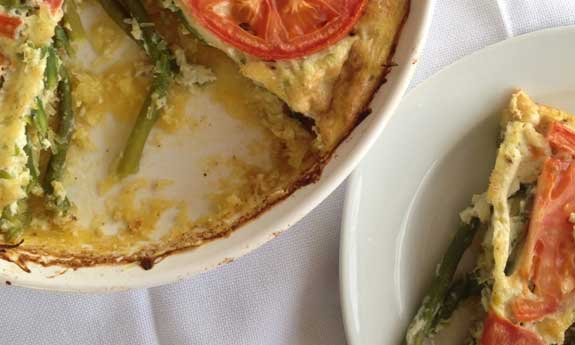 5. Asparagus Quiche with Spaghetti Squash Crust
Asparagus is a vegetable you’ll want to embrace while eating the Paleo way. It’s a superfood in its own right, and it provides fiber and minerals that complement all of the meat you’ll be eating. Here they’ve done away with the grain-filled crust you’ll see on ordinary quiche and used a spaghetti squash as a stand in. Slices of tomatoes make an attractive topper, and also provide you with extra vitamins and minerals. One thing you’ll find while on Paleo is that you automatically get plenty of nutrition from the foods you’re eating, so you’ll naturally feel better and have more energy.

6. Coconut Crust Quiche
Maybe you never thought that you’d have a quiche that is using a coconut crust, but Paleo is all about being creative and using Paleo friendly food items to make dishes that you actually want to eat and look forward to. They are using coconut flour for the crust, so it’s not like you have to go out and buy a coconut and try to figure out how to make a crust from it. It’s just a matter of buying coconut flour and using it like you would ordinary flour. You’ll probably find that cooking Paleo is pretty similar to regular cooking because you’re using modified ingredients that still function the same.

7. Garden Pea, Feta & Mint Tart
If you like peas you’ll want to make this quiche for yourself. It’s packed full of peas and uses feta cheese, one of the cheeses that many Paleo followers will allow because it’s made from goat milk and is easier on the digestive system than other cheese. Of course you’ll need to make your own determination on this and decide whether you want to allow certain cheeses in small amounts, or go totally off cheese. Paleo purists stick to the no-cheese rule and would take a pass on this one or just omit the feta cheese. The crust is simple enough to make using ingredients that are all good in terms of Paleo guidelines.

8. Garlicky Collard Pie
She’s calling this collard pie but it looks a lot like a quiche. Collard greens are super good for you, and if you haven’t been eating them a lot until now you should probably start adding them to your shopping cart whenever you’re in the grocery store. They’re used heavily in this recipe, so you’ll be getting plenty of vitamins and fiber, and she’s using a hard cheese which means you’ll be getting less lactose than you would from a soft cheese, so it should be easier to digest. Early on in Paleo you’ll want to test out how your body handles cheese and come to a decision on if you will eat it or not. 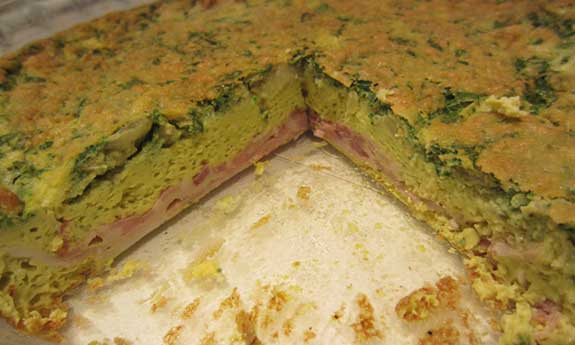 9. Bacon-Crusted Quiche
This quiche takes bacon to a whole other level by using it as the crust. This effectively gets rid of any grain issues because you won’t be using any flour for the crust, but it also gives it some extra protein and plenty of flavor. They’re using nitrate-free bacon, and this is the sort of thing you’ll want to watch out for when it comes to buying your Paleo groceries. It’s not enough to just buy whatever is available. You want to be very discerning and choose foods that are organic, or uncured, or in this case free of nitrates. The less processed a food is, the better, because we are trying to get back to our caveman roots here.

10. Crustless Broccoli and Sausage Quiche
No need for a crust with this broccoli and sausage quiche. Because the quiche goes right to the edge of the pan you are getting the same flavor throughout. Broccoli is a superfood that you should be eating regularly because of its many benefits. The addition of sausage to this quiche means you’ll get its savory flavor, as well as the protein it provides. It’s a good idea to stick to a workout program on Paleo, because the extra protein intake means you can more easily sculpt lean muscle, which helps the body in countless ways.

11. Asparagus Quiche with a Savory Sweet Potato Crust
Here they’ve gone with sweet potatoes as the crust, which takes out the grains and flour and replaces them with a vegetable that is one of the best foods you can eat on Paleo. Sweet potatoes trump their white potato cousins in almost every area of nutrition, which is a good thing since regular potatoes are not allowed on Paleo. Sweet potatoes will give this quiche even more fiber, since it’s already getting some from the asparagus. They’ve added some cheese in with the sweet potatoes to form the crust and give it a savory flavor, so you’ll want to make adjustments to this if you’re not eating cheese of any kind.

12. Japanese Inspired Quiche
The fun things about eating Paleo is that you can borrow flavors and tastes from all sorts of cuisine to make things more interesting on a day by day basis. This quiche is inspired by Japanese cooking and has nori and sesame seeds to give it an Asian flavor. Nori is seaweed, so this quiche is sure to taste like no other quiche you’ve tried before. Sometimes you have to keep an open mind while doing Paleo and try new types of foods, or old foods made in new ways. It’s just a way to make it exciting so you don’t get bored with the same foods again and again, all while keeping it Paleo approved.

13. Crustless Mini Quiches
These mini quiches are so cute you’ll forget that they’re actually quiche. They may be small but they’re packed with yummy things like omega-3 enhanced organic eggs, bacon, chicken, and an assortment of vegetables to help balance them out and make them a perfect Paleo start to your morning. Because of their size they’re great for an on the go breakfast that will help you drive past all of the fast food places with their breakfast offerings that are anything but Paleo. This is one diet plan that will make you not want all of that processed junk and you’ll crave real food for a change.