Pumpkin pie is often reserved as a staple holiday dessert, but it can be eaten anytime throughout the year. The best part is, if you make it the right way, you’ll be getting the awesome nutritional value of pumpkin without any of the grains and dairy that can really muck up your system. Going Paleo doesn’t mean giving up tasty things, it just means opting out of the Cool Whip that you might have previously enjoyed on your pumpkin pie. 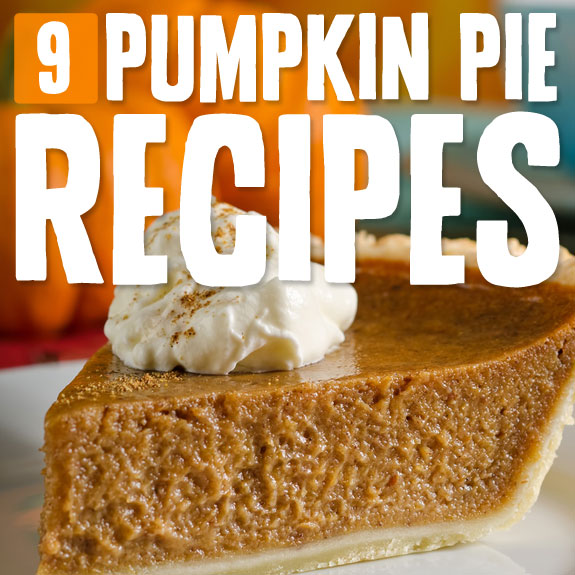 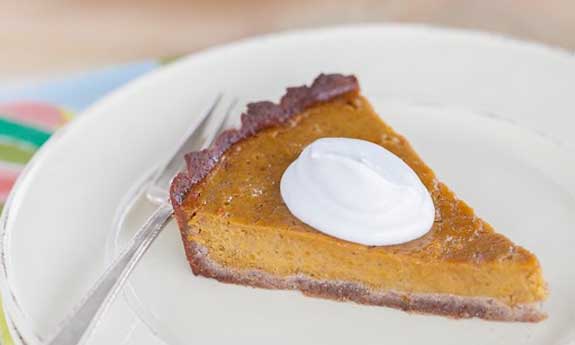 Photo: Against All Grain

1. Grain-Free Pumpkin Pie
Almond flour is used instead of the all-purpose flour generally used in pumpkin pie crusts. There’s also pecans in the crust, and they’ve made it taste buttery by putting coconut oil in the crust, and sweet with the addition of honey to the crust as well. For the filling you’re getting quite a traditional assortment of seasonings and spices guaranteed to make this a pumpkin pie you can serve to your family and friends, even if they’re not doing Paleo. They probably won’t even notice it’s “special” but you’ll know, and you can partake in the festivities like everyone else.

2. Coconut Pecan Pumpkin Pie
We’re going to start with a pumpkin pie that might make the rest of the pies on this list obsolete. If you like coconuts and pecans, there’s no need to read any further, this is your best pick. The crust is made with pecans and coconuts, so no worries on whether there’s any grains in it. The filling is pretty standard pumpkin pie filling, but without the heavy cream and tons of sugar added. What you’re left with is a great tasting pumpkin pie that will leave you wanting for not. No whip cream needed on the top of this one, it’s sweet enough.

3. Paleo Pumpkin Pie
This recipe is perhaps more Paleo than others using canned pumpkin puree because they’re take the extra step of using an actual pumpkin and making a puree out of it. This will give your pie a freshness that you just don’t get when using canned ingredients, and it’s more akin to the sort of pie that early man would have made, if they had the ability to make pies back then. The crust is made from coconut flour and almond meal, and will serve quite well as a grain-free crust. The filling uses coconut milk and stevia for natural sources of sweetness that will make this taste just right. 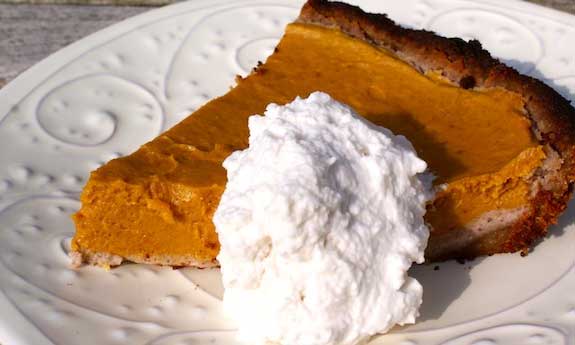 4. Pecan Crusted Pumpkin Pie
You’ll love making this pumpkin pie because they break everything down nicely and show you what goes into each part of the pie. The crust is made with coconut flour and pecan butter for awesome flavor. The filling is pretty classic, but with honey used to add sweetness instead of sugar. What’s great about this recipe is that they link to a page that shows you how to make whipped cream using coconut cream, so you keep it dairy free and have the look and taste of whipped cream to put on your pumpkin pie. Success!

5. Bill’s Chiffon Pumpkin Pie
The grain-free crust they show you how to make can be used on any pie you make during the holidays, not just pumpkin pie. Since this is a chiffon pie it’s going to come out lighter and airier than your typical pumpkin pie, which is usually thick and dense. It’s not so much the ingredients that are being used that give it this quality, it’s the method, so be sure to pay extra attention to what he’s doing in the directions if you want this to come out as planned. This is for those that like the taste of pumpkin pie, but perhaps not the thick texture in your mouth.

6. Primal Britain Paleo Pumpkin Pie
This is perhaps not the prettiest pumpkin pie on our list, but it makes up for what it lacks in aesthetics with a full pumpkin pie flavor. The crust is very basic, being made almost entirely from almond flour and butter. The filling is also pretty standard for a Paleo pumpkin pie, using pumpkin puree from a can, and mixing in the required spices for it to come out tasting like you want a pumpkin pie to taste. A pretty easy recipe to follow and keep handy for the holiday season or any time. 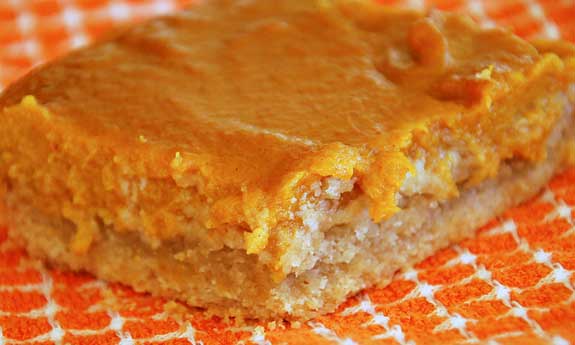 Photo: Clean Eats in the Zoo

7. “Paleo-fied” Pumpkin Pie Bars
When you want the taste of pumpkin pie in a more portable format, this will get the job done. The ingredients on these bars are pretty much the same as what you’ll find in a pumpkin pie, in fact these function pretty much just like a pumpkin pie, but without the familiar pie slice shape, and with a crust that is a bit different than your typical pie crust. Rest assured that all of the ingredients are Paleo approved for your total enjoyment. That’s why you’ll see items like almond flour, coconut oil, and pure maple syrup being used, as these are staples of Paleo baking.

8. Easy Crustless Pumpkin Pie
One sure way to create a pumpkin pie that doesn’t have any grains in the crust is to take the crust out of the equation entirely. If you love pumpkin pie but don’t like suffering through the crust, this recipe is for you. It calls for chia seeds or flax seeds, both of which will supply you with additional nutrients and omega-3s, something that can’t be said for the general purpose flour you get in a crusted pumpkin pie. They live up to their promise of keeping this easy by keeping the number of ingredients down.

9. Pumpkin Pie with Nut Crust
The combination of almond flour and hazelnut flour totally works in this recipe, and hazelnut flour is not something we typically see being used in Paleo baking. It’s going to give this a different flavor profile than you’ll get with the other recipes featured here, albeit a subtle difference. They are using both organic pumpkin and organic coconut milk in the filling, so you’re assured of getting a pure, natural pie that is a far cry from all of the pies you’ll see at the supermarket. It’s nice to be able to eat what you want during the holidays and not hurt yourself in the process.