Ordinary muffins can be pretty satisfying, but pumpkin muffins bring even more to the table thanks to the fiber and antioxidants provided by the pumpkin. And since these are Paleo pumpkin muffins you’re avoiding all of the ingredients that go into a typical muffin that make them a no-go on most diet plans. With no grains and especially no wheat, these muffins will satisfy your taste buds with their pumpkin and leave no remnants behind on your waistline. 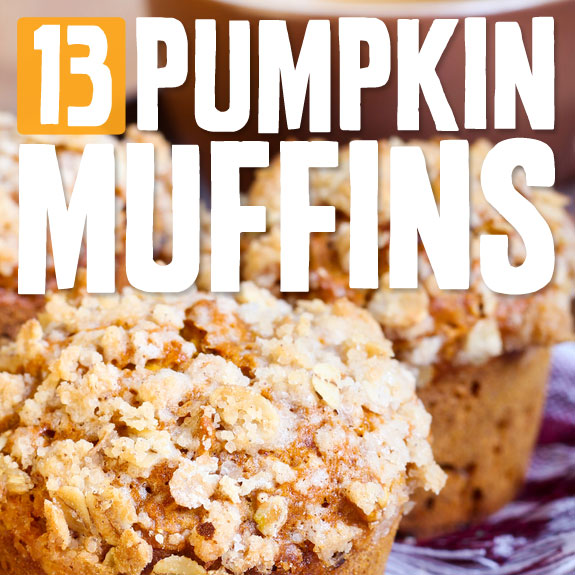 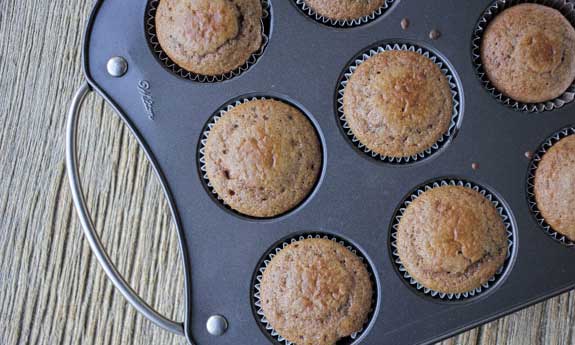 1. Pumpkin Chocolate Chip Muffins
Kiri’s done it again with another recipe that will blow you away with flavor. The combination of chocolate and pumpkin is not something you see everyday, and using chocolate chips as she does here in this pumpkin muffin recipe is borderline genius. You’ll get the smoothness of the pumpkin and the chocolatey goodness of the chips in each bite, and you can smile knowing that these muffins won’t put a dent in your Paleo progress. She’s using natural, wholesome ingredients that are right in step with healthy Paleo eating.

2. Pumpkin Streusel Muffins
These pumpkin muffins are made streusel style so they will bring the sweetness without using any refined sugar. Pure maple syrup gets the job done for the sweet taste of the streusel crumble, and is one of the authorized sweeteners while you’re doing Paleo. An entire cup of pumpkin puree is used in this batch of muffins, and you can either make that from scratch or get it out of a can but the more Paleo way to do it would be to make it yourself for quality assurance. Paleo is about taking the not-so-easy way if it means you get a better end product.

3. Pumpkin Spice Muffin in a Minute
One thing about muffins is that you want them now, but it takes awhile to make them. This pumpkin muffin recipe says you’ll be eating the muffin in the same time it takes to prepare the ingredients for most muffins. Like any food item promising fast results this one uses the microwave, a modern marvel that cavemen might not have had access to, but you certainly do. Whipping up these muffins takes just minutes, and add another minute for the “baking” and you’ve got a hot steamy muffin ready to be gobbled down. Everything these contain is Paleo approved so you can eat them without remorse. 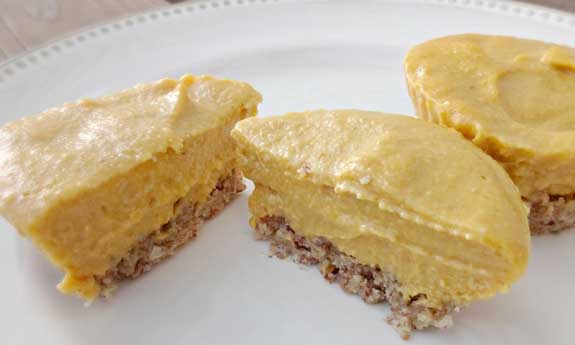 4. Banana Pumpkin Cheesecake Muffins
These pumpkin muffins have a lot going on with the addition of bananas, and a cheesecake style to them. Did we mention they’re raw? That means you can leave the oven off and still enjoy the taste of a good muffin, great for summer days when it’s too hot to want to bake. Since this is a Paleo recipe they needed to figure out how to bring you cheesecake flavor without the dairy, and they’ve borrowed from vegan recipes and are using cashews as the cheese stand-in. The end result is a yummy, cool muffin that reminds you of cheesecake.

5. Cranberry Pumpkin Orange Spice Muffins
Cranberries are a great food to combine with pumpkin, and they give it a tart taste that you generally won’t find in a pumpkin muffin. Add to that the orange flavor from orange zest that adds yet another layer of yummy to these muffins. The spice they’re referring to in the title is from cloves and cinnamon so you’ll definitely notice that these aren’t your ordinary everyday muffins. The whole thing is kept within Paleo guidelines, so unlike those giant muffins sold in coffee shops, you can actually eat these and not hate yourself later.

6. Pumpkin Mug Muffin
Making muffins in mugs is no huge revelation, but it does serve some important purposes. First, it comes through in times when you don’t have a muffin tin handy but still want a muffin. Next, it creates single serving muffins so you don’t have to make an entire batch if you’re just trying to feed yourself of a few people. And finally, mugs are microwave safe so you get your muffins a lot more quickly than if you baked them. Oh, and don’t forget the handle which lets you dive right into your muffin while it’s still nice and hot, just as long as you protect your fingers from a hot handle. 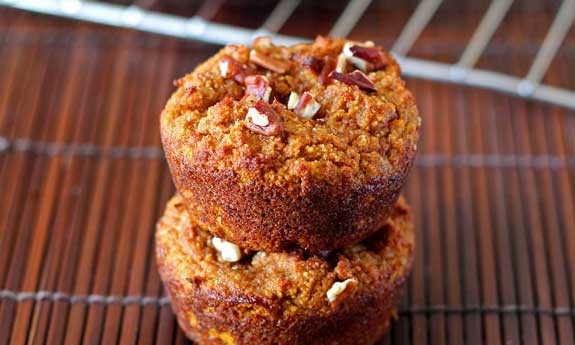 7. Coconut Flour Pumpkin Muffins
These pumpkin muffins use coconut flour instead of general purpose flour, so right off the bat they’re starting from a healthier place than traditional muffins. That gets rid of the grain problem, and they’re using maple syrup to solve the refined sugar problem that plagues most muffins. Once you get those two factors out of the way, you are pretty much in the clear. The additional ingredients they’ve chosen are things like eggs, pumpkin puree, coconut oil, and chopped nuts like walnuts or pecans, all things that are encouraged on the Paleo diet, so you can’t go wrong with these.

8. Purely Paleo Pumpkin Muffins
One thing you’ll notice when you’ve eaten Paleo long enough is that the Paleo cooks and chefs out there are making a huge effort at bringing you quality foods that don’t even feel like you’re dieting. These pumpkin muffins look amazing, and they’re using multiple parts of the pumpkin by garnishing them with pumpkin seeds. The best part is that we’re just finding out how healthy pumpkin seeds are, so this reinforces the concept of Paleo and shows that it really does get you eating better foods, and does so in a natural way that doesn’t feel forced.

9. Grain-free Pumpkin Muffins
These muffins are big, and they are sure to satisfy multiple cravings. Sometimes when you’re eating like a caveman you just want to feel full, like really full but not stuffed. You want a muffin that is going to make you wonder if you can finish it, and then be glad that you did. When you’re filling up on wholesome ingredients like olive oil, eggs, pumpkin puree, nuts, and maple syrup, while avoiding things like wheat and its gluten, sugar, hydrogenated oil, and high fructose corn syrup, you can get that full feeling without feeling gross. On a psychological level it really helps you get through to the next meal. 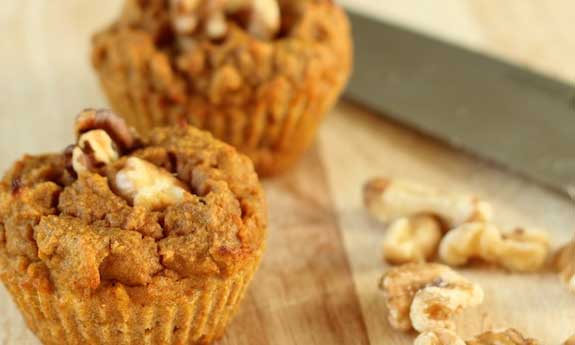 11. Pumpkin Pucks
These pumpkin muffins resemble hockey pucks, but they won’t taste like them! They are made with good things like almond butter, eggs, cinnamon, nutmeg, and of course some pumpkin. They are making them directly in the muffin tin so they’ll have a smooth outside rather than the ridges formed by muffin cups. When they pop out they’ll have the hockey puck look to them but will taste like a little piece of pumpkin heaven. This is one pumpkin pick that you don’t have to worry if it will cause you to gain weight or feel sluggish after you eat it.

12. Pumpkin Raspberry Muffins
Raspberries make a great addition to a batch of pumpkin muffins because they bring additional antioxidants into the mix, while providing a contrasting taste to the smoothness of pumpkin. When you bite into a raspberry you’ll get the familiar tartness, which when combined with the taste of pumpkin creates a new sensation altogether. These muffins are listed as being low carb, but that’s not something you’ll be interested in on Paleo. Cavemen weren’t counting carbs, and neither should you, but it’s nice to know that you’ll be getting a tasty treat without loading yourself up on carbohydrates. 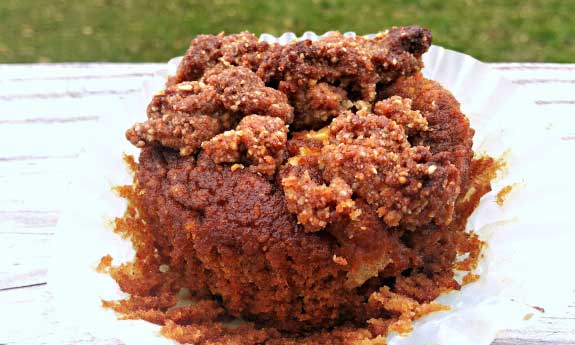 13. Pumpkin Apple Streusel Muffins
Near the top of this list is streusel so it’s only fitting that we end it that way. These pumpkin muffins have been hit by the apple streusel truck and have tons of added flavor. There’s lots to like about these muffins, including the base of ingredients that form the actual muffin itself. There aren’t any ingredients used that will throw you off track, and that even extends to the streusel topping. The use of sunflower seeds combined with cinnamon, honey, and coconut oil, is sure to please the taste buds while being easy on your body.