Bread is not necessarily a no-no on Paleo, you just have to make sure it’s made with no wheat or grains and then you can enjoy it without feeling guilty. One of the yummiest breads out there is pumpkin bread, and we’ve found an assortment of delicious recipes that are all made according to Paleo standards, with no wheat, no dairy, no sugar, and with natural ingredients that are actually good for you. 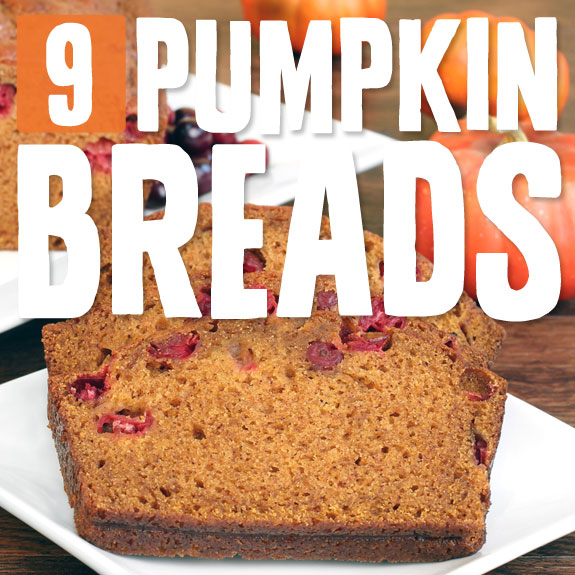 1. Real Paleo Pumpkin Bread
Here is a classic pumpkin bread recipe that you can use as your go-to when the need arises. Follow the steps for using real pumpkin if you want to make this very much Paleo style, as this keeps it more natural and will provide more nourishment. Here’s a rundown of what you’ll need: eggs, coconut flour, almond flour, ghee, honey, sea salt, and just the right amount of seasonings so that this ends up tasting just like you want it to. As you can see these are all Paleo friendly ingredients, replacing grains and providing vitamins and minerals that you need.

2. Coconut Flour Pumpkin Bread
This pumpkin bread uses coconut flour so it’s going to have a naturally sweet taste to it as well. It also suggests that you use arrowroot flour to make the loaf come out lighter. A lot of times with Paleo breads you’ll notice that the consistency is pretty dense, so this may be a good way to get a lighter, more airy loaf of bread. Cinnamon and nutmeg will give this the flavor you’d expect, and the pumpkin puree keeps things very easy to make.

3. Chocolate Chip Pumpkin Bread
Chocolate chips make just about any baked good better, and when they’re infused in pumpkin bread it’s clear to see this is an upgrade. You’ll notice by the pictures that they bought their pumpkin puree from Whole Foods. While you don’t necessarily have to shop at places like that, the kind of quality you’ll get is worth the added expense because they’re focused on bringing natural foods without a lot of preservatives and additives. In this recipe they’re using medjool dates, so you’re getting even more nutrition. We recommend using dark chocolate chips to stay within Paleo guidelines. 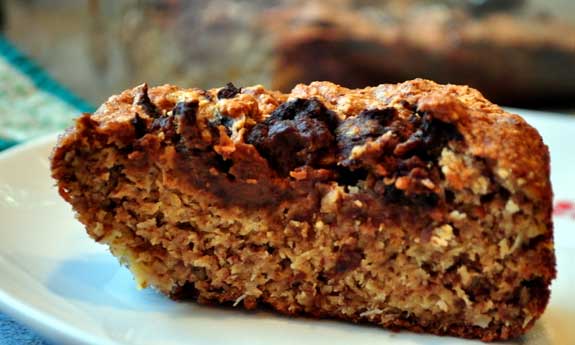 4. Paleo Pumpkin Swirl Banana Bread
This is either a banana bread that thinks it’s a pumpkin bread, or vice versa. We had to include it here because it just looked too good to pass up, and the pumpkin swirl is what steals the show. Almond butter, coconut, bananas and pureed pumpkin all go together great, and unsweetened cocoa powder adds a nice chocolate taste that you’ll probably end up craving. The good thing is that you can satisfy your craving without feeling guilty, heavy, or like you blew your entire diet with one piece of bread. On Paleo you can eat foods like this and not feel like you’re cheating as long as you don’t make a meal out of it.

5. Pumpkin Bread Obsession
This pumpkin bread is advertised as being gluten-free and grain-free and that’s important for Paleo eaters because no grains are allowed. By cutting out the grain you’re automatically sticking to a gluten-free diet, but you have to be careful because some items marked GF or gluten-free are not OK while on Paleo. In this instance they’re using almond flour and coconut flour, as well as an assortment of other ingredients which are all Paleo approved. Notice the commitment to using pure ingredients, like the high quality cinnamon they recommend. This is in line with the Paleo way, because you want things in their purest form, without a lot of junk added.

6. Primal Pumpkin Bread
This primal recipe adheres to Paleo guidelines, so it can be used by Paleo and Primal followers alike. You’ll notice that the raisins are optional, so you can add them if you want, or leave them out if you prefer your bread plain. There is also some leeway as to which spices are used in this, allowing you to add in your favorite fall spices. It all goes well when pumpkin is being used as your foundation. This is an easy recipe to whip together whenever the mood for pumpkin bread strikes. 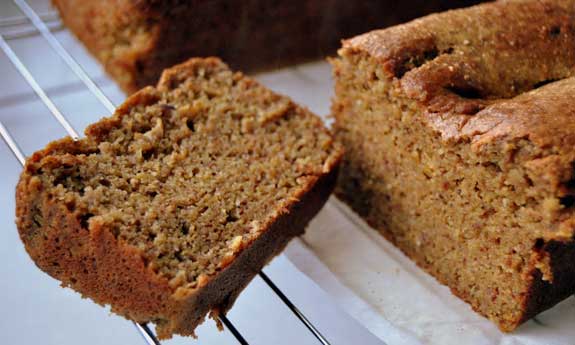 7. Classic Pumpkin Bread
There’s no bells and whistles on this pumpkin bread, and it comes out looking like the traditional pumpkin bread your mom used to make. The nostalgia factor is in full effect, but many of the classic ingredients have been replaced with Paleo perfect items like almond meal and coconut flour. These are grain-free options that will mimic ordinary flour that is typically used in pumpkin bread. The result is that you get what looks like a regular pumpkin bread, but you avoid the grains that make you fat and cause digestive problems.

8. Spiced Pumpkin Bread
This pumpkin bread boasts a nice assortment of spices, The use of pumpkin seeds serves a few purposes. First, it is used as a nice decoration, and is totally relevant since it’s the seeds that were in the pumpkin that’s in the bread. Also, the more they study the effects of pumpkin seeds on the body the more they are starting to refer to it as a superfood. Eating Paleo means that you’re getting plenty of foods that end up on healthy food lists and provide antioxidants and minerals you need to fight off heart disease and cancer.

9. Paleo Pumpkin Gingerbread Cake
This isn’t quite a bread, but you get the pumpkin bread taste in cake form, and infused with a gingerbread flavor as well. The recipe author acknowledges that these come out feeling more like brownies than cake, so this may be able to satisfy your brownie craving while at the same time giving you pumpkin bread that is a fall classic. Of course you can enjoy it year round as well, and it’s one of those dishes that you can share with non-Paleo friends and they don’t even have to know that it’s free of grains, dairy, and added sugar.