Having some top-notch Paleo pulled pork recipes in your collection is a must. They come in handy as a sandwich, salad topper, or all by themselves with a side of veggies. Here are several different styles and flavors to appeal to your palate. 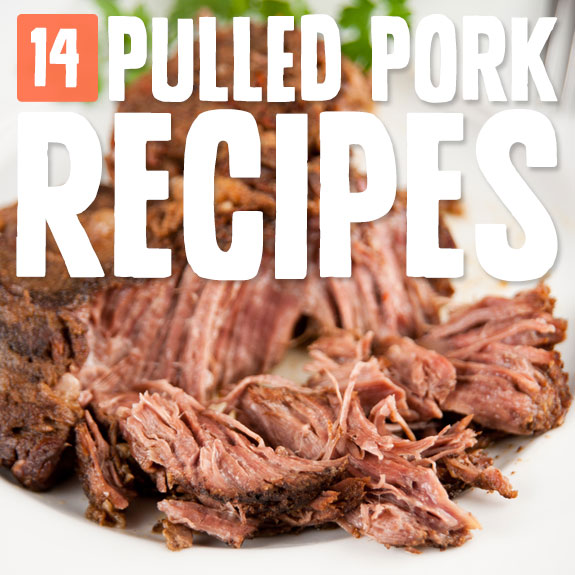 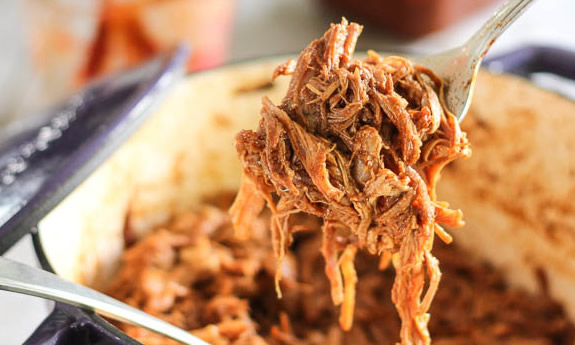 1. BBQ Pulled Pork
Sonia is using a pastured pork butt for this pulled pork recipe, and that’s something you should consider with all of your Paleo meats. Pastured means that the pigs were fed a natural diet and allowed to roam free, rather than being cooped up in a pen and fed an unnatural diet made of different feeds. These feeds are filled with antibiotics and other drugs to try to keep the pigs healthy even though their living environment is so crowded. Pastured meats are more in line with Paleo. and this pulled pork recipe is one of the best around. 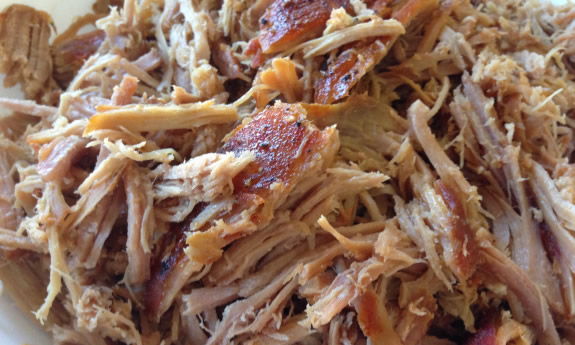 2. Simple Slow Cooked Piggy
Abbey does a great job of keeping this Paleo, and uses one of the most-loved of all Paleo meats, bacon, to get a more savory flavor. The bacon gets placed at the bottom of the slow cooker so it can work its magic and infuse the rest of the pork with its juices.

The cut she’s using is a sirloin tip roast, which is going to produce some lovely results and it’s recommended to follow this suggestion if you’re wanting your pulled pork to come out exactly like hers. Some paprika and garlic insure that this is going to be a favorite recipe. 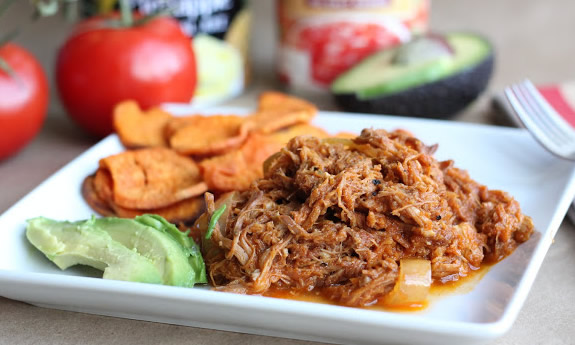 3. Pulled Pork with No Sugar Added BBQ Sauce
This recipe is worth bookmarking for the barbecue sauce instructions alone. It may seem like this sauce has a long list of ingredients, but each one contributes to the overall taste, and it’s interesting that none of these ingredients is sugar. It gets its signature sweetness from pineapple, so it still tastes the way it should, sweet and tangy. It goes really well with the pork because pork tastes good with a bit of sweetness. In her recipe she’s using 4-5 pounds of pork, enough to feed an army, or to store or freeze for eating later. 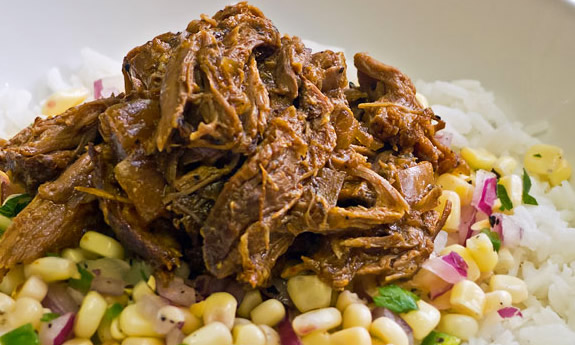 4. Slow Cooked Pulled Pork
Cooking pulled pork in the slow cooker isn’t just a matter of tossing it in by itself, you’ll want to make sure that you’re adding in the right accompanying ingredients so that it comes out tasting incredible. That’s what’s happening here, with plenty of different seasonings and spices to make this taste great, while staying within the guidelines of Paleo cooking. Coriander, cayenne, and dijon mustard are just a sampling of the powerful tastes that go into this pulled pork offering. Add this to a Paleo friendly bun or serve on a bed of vegetables. 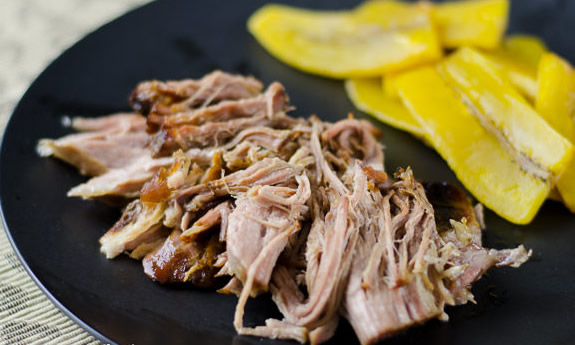 5. Slow Cooker Pork
This recipe keeps things simple, and the taste of the pork will definitely come through. There is just some ginger and peppercorns added to give it some extra flavor. You can add in some prunes, but this is an optional step. The cooking process is also pretty simple, with the slow cooker making it very easy to follow and get good results each time. You may want to have some Paleo BBQ sauce handy if you want to add to the flavor of it. This is one pulled pork that you can use in a number of ways, depending on what sort of meal you need. 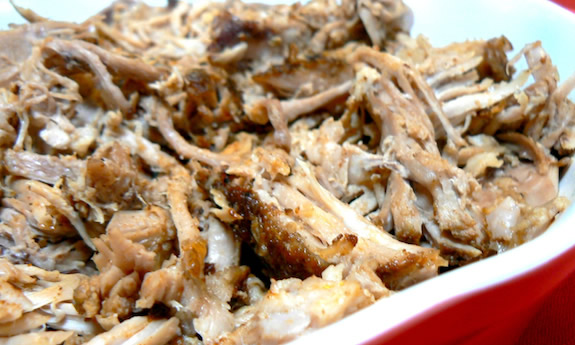 6. Paleo Smoky Pulled Pork
When you want your pork to have a rich, smoky flavor to it, this is the recipe to follow. It uses smoked paprika to provide the smokiness thanks to a dry rub. Dry rubbing your meat is a great way to make sure that the flavor sticks to the meat throughout the cooking process. This recipe uses the slow cooker, a popular choice for pulled pork because it does the perfect job of cooking it until it’s ready to fall apart. You then just shred it up with a fork to have mounds of pulled pork ready to eat. 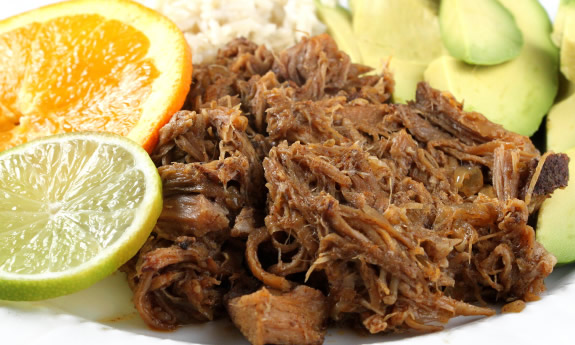 Photo: Our Life in Food

7. Cuban Pulled Pork
This Cuban-style pulled pork is packed with flavor, thanks to the large number of ingredients that go into it. You’ll find items like oregano, cinnamon, and cumin combining together to give this its distinctive flavor. This is one pulled pork you’ll want to make a big batch of so that you don’t regret not making enough later. Once again the slow cooker gets the call for the best pot to cook this up in, and you’ll love the fact that most of the ingredients get mixed together and then rubbed onto the meat, so prep time is pretty low. 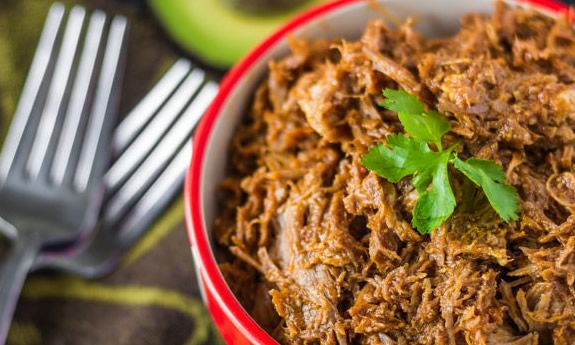 8. BBQ Pulled Pork
You just can’t beat a classic, and this BBQ pulled pork recipe is a fun one to cook up for summer get togethers or anytime of the year. What’s wonderful about this recipe is that it includes a link to the special hickory flavored barbecue sauce recipe so you can keep things Paleo by not resorting to store bought sauces. Most of the BBQ sauces you’ll find sold in stores are loaded with sugar, and sometimes even High Fructose Corn Syrup. This is simply not acceptable on the Paleo diet, and making it from scratch is recommended. 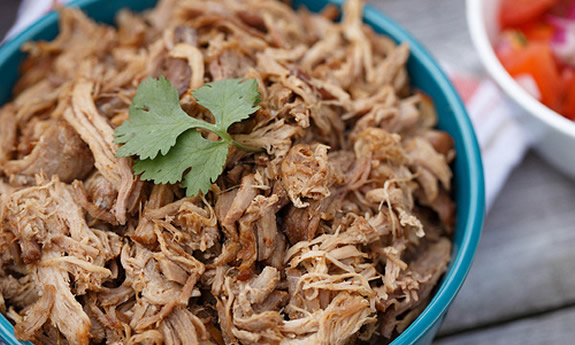 9. How to Make Perfect Carnitas
Mastering the art of making carnitas is something that will pay dividends again and again. You can use it as filling for tacos or burritos, or you can simply eat it straight up along with a side of vegetables. The recipe show you exactly how to make it so that it comes out looking and tasting just the way it should, and it’s recommended that you make as much as you can fit in your pot, and use the biggest pot you have. It freezes well, and also stores well for a few days after making it. You’ll be thankful you have a ready source of meat available. 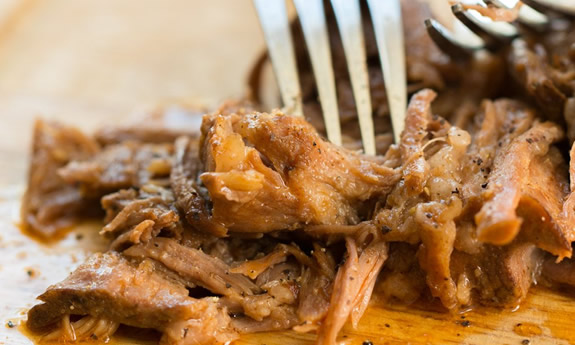 10. CrockPot Pulled Pork
The Grok Pot takes center stage with this pulled pork recipe, and it simmers the meat slowly so that it cooks all the way through, falls off the bone, and is juicy and delicious. The different ingredients in this are sure to make your taste buds smile, with spices like oregano, cumin, and chili powder. There’s also some smoked paprika, a nice item to keep stocked in your kitchen for just such an occasion as this. There’s also instructions on how to make Beasty BBQ Sauce, which is highly recommended if you want to amp the flavor up considerably. 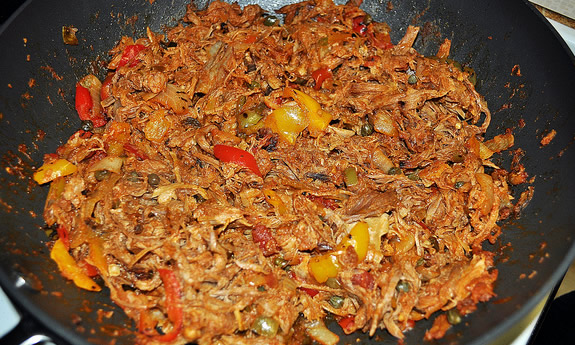 11. Spicy Skillet Pulled Pork
There’s nothing quite like spicy pork, and this is a way to make it up in the skillet. You start things off by making a batch of pulled pork, which can take all day. Once you have the pulled pork ready it’s time to add it to the skillet and spice it up. Peppers, salsa, and cayenne combine to give this its spicy flavor, and you’ll be glad that you didn’t stop at pulled pork and turned it into something even more. You can a lot of control over just how spicy this gets by reducing or increasing the amount of the spicy ingredients used. 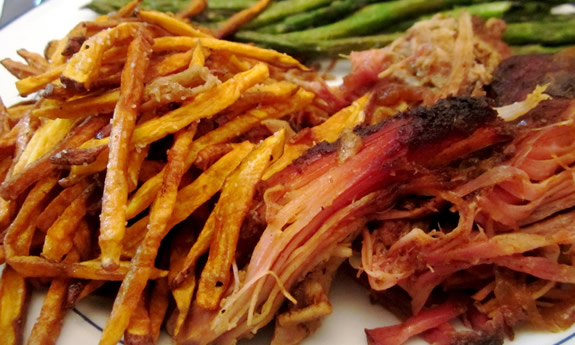 12. Smoked and Pulled Pork
This is a two-step process involving smoking the meat first, and then slow cooking it. This may seem like a lot of work, but when you taste the smoked flavor in the meat you’ll know that it was worth the extra time. It provides a flavor that you just won’t find in other pulled pork recipes, and even liquid smoke or smoked paprika will only get you part of the way to the smoked flavor that comes from actually smoking the pork first. Ground mustard and coriander are two spices that will make you take notice of this special dish. 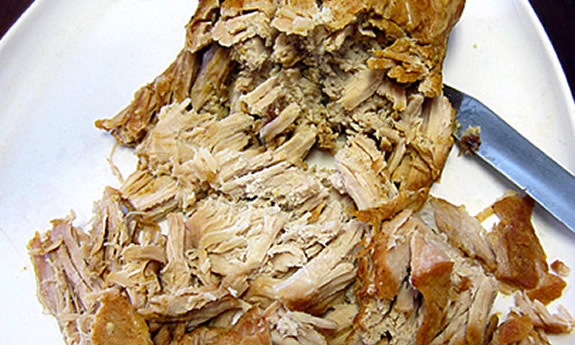 13. Orange Pineapple Pulled Pork
Here’s a way to infuse your pork with the citrus flavor of orange and the sweet and sour flavor of pineapple. It gives the pork a lovely hue as well, but it’s the flavor that you’ll be most happy about. The meat gets marinated, so the flavor is able to seep into the meat and comes through even after it’s been cooked. This is all that’s needed to give it the orange flavor, and it’s one pulled pork recipe that will reliable satisfy your craving for pulled pork. 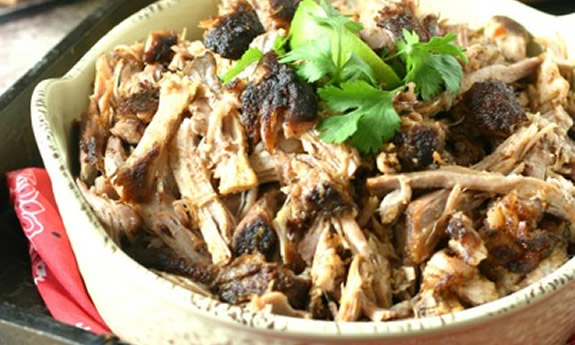 14. Chili Pulled Pork
This shows you how to make the filling for pork tacos, but the chili pulled pork that’s used is good enough to eat on its own whenever you get the notion. Of course you could also make tacos with it using Paleo friendly taco shells. You could also make burritos or enchiladas with it once you have it made. The secret of course is chili powder, but there’s also cumin and oregano as well as red pepper flakes so it will have a bit of kick to it as well. She’s even added a bay leaf to the pot so that it has even more flavor, just be sure to remove it before eating.