Puddings are a favorite treat among kids and kids-at-heart, but conventional versions you grew up eating are made with lots of sugar and dairy—or maybe even no dairy, just corn syrup solids. Yuck! Try these paleo-friendly puddings with real food ingredients and delicious flavors.

1. Dark Chocolate Pudding
If you like the looks of the last recipe but don’t have avocado on hand (or you’re looking for something more treat-like and decadent) try this recipe. It’s made with full-fat coconut milk, maple syrup, cocoa powder, pure vanilla extract, salt, and chopped dark chocolate. 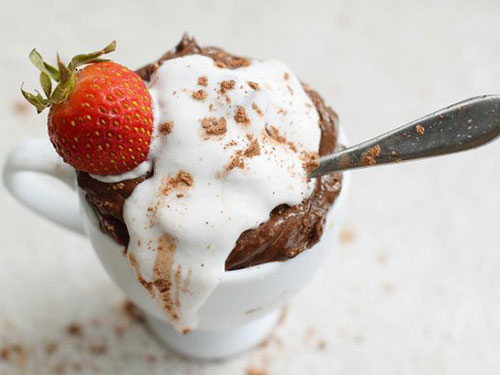 2. Raw Avocado Banana Chocolate Pudding
This amazingly good and silky chocolate pudding tastes remarkably similar to conventional chocolate pudding. You can’t even taste the avocado! Sweeten it up with a bit of raw honey and add a pinch of sea salt to help bring out the sweet and chocolaty flavors.

3. Paleo Chocolate Pudding
This is the simplest avocado chocolate pudding you’ll ever make. It only has four ingredients! All you need is avocado, cocoa powder, honey, and vanilla extract. If you want you can throw in a pinch of sea salt to add minerals and bring out the flavors, but it’s not even necessary.

5. Three Minute Pudding
For this recipe, just swap out the peanut butter for almond butter or even cashew butter (so yummy). For nut free, use hulled tahini or sunflower seed butter. See? This recipe is so flexible, and it’s super yummy with just banana and honey as the sweeteners. 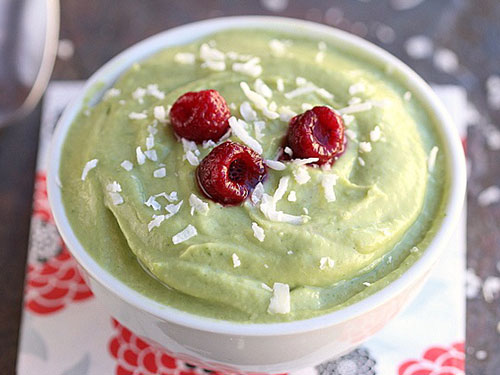 Photo: Oatmeal with a Fork

7. Lime and Avocado Pudding
This second take on avocado lime pudding is sweetened with coconut nectar because it’s a low glycemic index sweetener. The lime zest adds a burst of flavor with coconut oil helps give you a smooth consistency—chilled, it will firm up considerably.

8. Sticky Date Self-Saucing Pudding
You’ll need to make a few adjustments to make this recipe paleo, but it’s so good that it’s worth it. Switch out the buckwheat flour for sunflower seed flour or extra almond meal, and replace the rice maple syrup or with maple or honey. Trust me, this gooey pudding is the best.

9. Three Ingredient Vegan Pudding
For a pudding you can share with your vegan friends, try this one. It’s incredibly easy to make with just coconut cream, coconut sugar, and baking cocoa. You really don’t need anything fancy for this one, just those three ingredients and your handy-dandy blender. 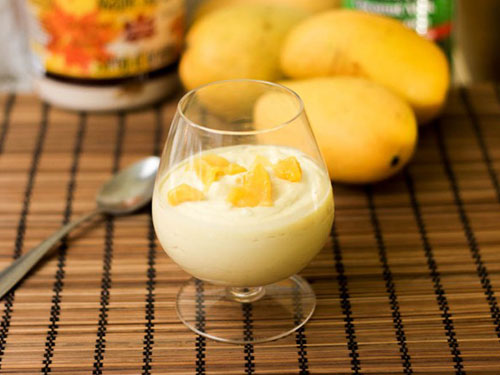 10. Vegan Mango Mousse
This dairy-free and three-ingredient simple pudding/mouse has a rich texture and a sweet flavor from the mango and maple syrup, along with healthy fats from the coconut milk. If you use a super sweet, ripe fresh mango, you might be able to reduce the maple syrup.

11. Chocolate Avocado Pudding With Hazelnuts and Sea Salt
This recipe is like the healthier, more sophisticated version of a Nutella-based dessert. The avocado pudding is dense and rich with maple syrup and vanilla, and it’s topped with a crispy and crumbly blend of crushed hazelnuts and sea salt flakes. The sea salt adds so much to the flavor! 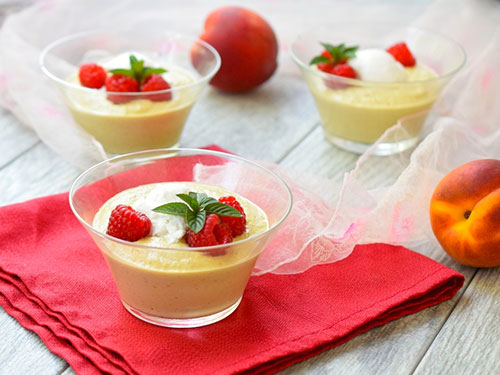 14. Paleo Peach Pudding
This simple pudding has a creamed cashew base, fresh peaches, and a bright burst of lemon juice, which helps bring out the peachy flavor. A touch of vanilla along with the cashew base gives this no-cook pudding a peaches and cream sort of flavor. So yummy.

15. Chocolate Pumpkin Avocado Pudding
In this recipe, the comforting flavor of pumpkin adds an autumn feel and taste to this pudding. The base is avocado with soft dates for a sweetness than won’t add as much moisture as honey or maple. Pumpkin puree and pumpkin spice are the secrets to the flavor!

17. Paleo Pumpkin Pudding
Want your pumpkin pudding chocolate-free? Don’t have any avocados on hand? No problem. What you want is this yummy paleo pumpkin pudding made with banana, maple syrup, vanilla, almond milk, protein powder of your choice, and a blend of cinnamon, ginger, and nutmeg. 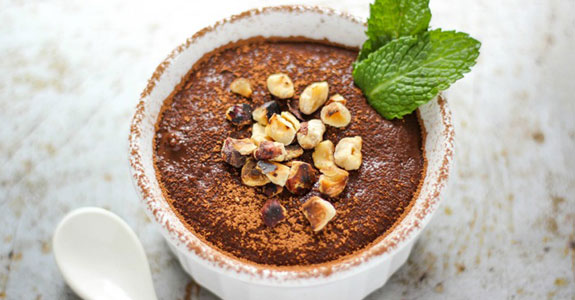 Photo: Simple as That

18. Healthy Banana Chocolate Pudding
If you want something a little fancier than the last easy chocolate banana pudding recipe I shared, try this gussied-up version sweetened with agave nectar (use maple syrup for something less processed), cinnamon, vanilla, and toasted hazelnuts for sprinkling over the top.

19. Chocolate Banana Pudding
If you love the combination of chocolate and banana and you need a quick pick-me-up treat, try this pudding made with just ripe bananas, vanilla or almond extract, and unsweetened cocoa powder. It’s easy to make and you don’t even need a dairy substitute!

20. Chocolate Zucchini Breakfast Pudding
Don’t stop reading! I know this sounds strange, but it’s really good and you can’t even taste the zucchini, which is healthy enough to turn this pudding into a suitable breakfast treat. Banana and a single date are the only sweetener, while avocado adds lots of healthy fats. 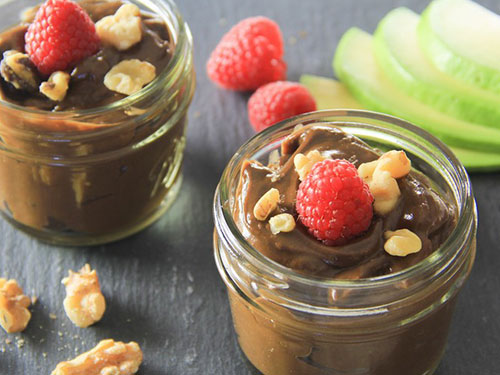 22. Paleo Chocolate Pudding
This recipe is just like your traditional cooked pudding, except its made with real food paleo ingredients like maple or coconut sugar, almond milk, tapioca or arrowroot starch, egg yolks, and vanilla extract. It’s rich, chocolaty, silky, and delicious.

23. Paleo Chocolate Pudding
The chopped toasted walnuts give this pudding a sort of rocky road flavor, minus the marshmallows (though you could totally add paleo marshmallows to the mix). Coconut cream and avocados make it nice and creamy while honey and cocoa powder blend to form a sweet chocolate flavor.

24. Pumpkin Pie Pudding
This sweet and gently spiced pudding has a custard base with pumpkin puree, almond or coconut milk, raw honey, tapioca starch, egg, vanilla, cinnamon, nutmeg, ginger, and allspice. It would be lovely for fall, but I’m not going to stop you from enjoying pumpkin pudding all year long.

25. Chocolate Raspberry Avocado Pudding
As you’ve probably figured out by now, chocolate avocado pudding can be dressed up even more with the addition of all sorts of flavors, and in this case, raspberry takes the cake. I mean the pudding. Cashew butter helps make this version extra rich and creamy! 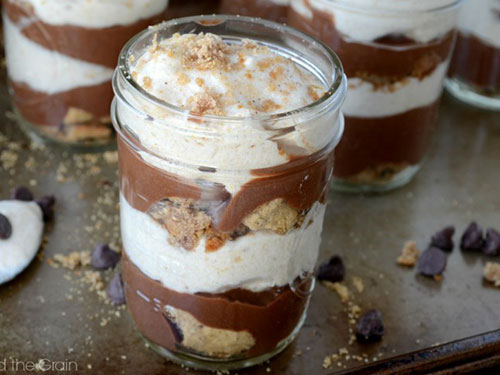 26. Fruit Sweetened S’Mores Jars
Yes, friends, these jars are for real. These are layered pudding cups with paleo graham crackers, chocolate pudding, and vanilla marshmallow whip and you’re going to want one right now. Better make extra and share with the kids, too!

27. Vegan Chocolate Banana Pudding Pie
Want to make your pudding into something crazy good to impress your dinner guests or even just your kids? Try this pie with a crust made from raw sunflower seeds, dates, dried figs, dried cherries, and cocoa powder with an avocado banana chocolate pudding filling.

28. Paleo Peach Pudding
This simple pudding has a creamed cashew base, fresh peaches, and a bright burst of lemon juice, which helps bring out the peachy flavor. A touch of vanilla along with the cashew base gives this no-cook pudding a peaches and cream sort of flavor. So yummy.

29. More Cauliflower Rice Pudding
I’m a huge fan of this cauliflower rice pudding thing, and this recipe in particular is extra simple with just rice cauliflower, coconut milk or another dairy-free milk, cinnamon, stevia, and egg whites. With stevia as the only sweetener, this is a truly sugar free treat. 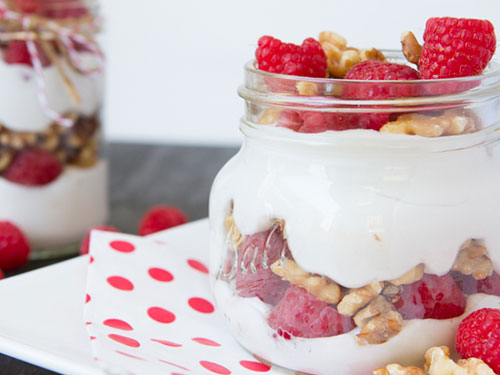 30. Vanilla Crème Pudding Parfaits
Doesn’t anyone else just love plain old vanilla? Vanilla is a great classic flavor, and this parfait layers vanilla pudding with nuts and fresh fruit. Coconut milk is the base and stevia is the sweetener, but with all the vanilla extract, the coconut flavor fades behind the others.

31. Vegan Pumpkin Pie Pudding
Want that pumpkin pie pudding without the eggs so you can serve it to your vegan friends? This version has avocado as well as pumpkin puree and natural almond butter, which adds a lovely richness in both flavor and texture. The vanilla and sea salt really finish it off!

32. Healthy Pistachio Pudding
This amazing treat reminds me a little of Turkish delight, because it’s full of pistachio flavor but also has rose water and almond extract. Avocado is the base and I think the texture is great, but if you like a more gelatinous texture like conventional pudding, there are instructions for adjusting it.

33. Cinnamon Banana Pudding
You can use grass-fed gelatin for this pudding, which will add gut-soothing nutrients and collagen that’s great for your healthy hair, skin, nails, and GI tract. The flavor is fun and spicy with banana, vanilla extract, cinnamon, almond milk, and sea salt to bring out the flavors. 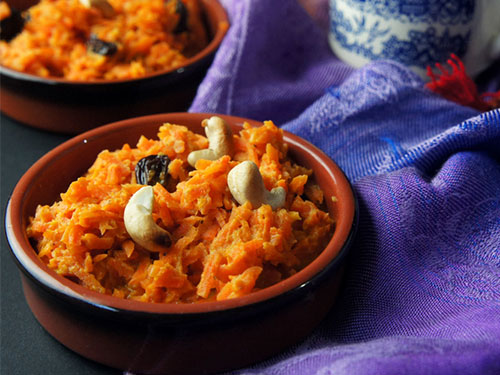 34. Indian Carrot Pudding
The carrot pudding is one of my favorite parts of our local Indian buffet. Of course, it’s not paleo and it’s made with lots of sugar. This version is honey-sweetened and dairy free, with spices like cardamom, ginger, cinnamon, cloves, and star anise.

36. Tapioca Pudding
This tapioca pudding is traditional, but made without dairy or refined sugar. Otherwise it’ll remind you of the version you ate as a child—creamy and delicious with chewy little tapioca pearls. It’s sweetened with maple syrup and flavored with vanilla.

37. Three Ingredient Banana Pudding
This pudding takes just ten minutes to whip up, but you’ll want to make it in advance so it can set in the fridge. You’ll just need banana, arrowroot starch, and coconut milk. Optional vanilla beans and banana slices are great, but this dessert is so yummy it doesn’t really need anything extra. 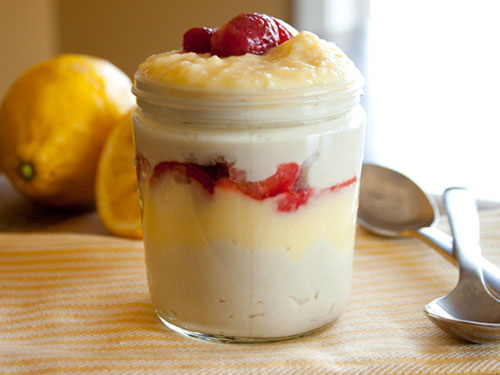 38. Strawberry Lemon Curd Coconut Milk Pudding
I love lemon curd, and I think this parfait is delicious with layers of homemade lemon curd and vanilla coconut milk pudding, both recipes provided on the blog. If you’ve never made lemon curd before, you’re going to want to give it a try. This version is so easy!

40. Keto Mint Pudding
Made with lots of healthy fats like avocado and coconut milk, this yummy mint pudding is stevia-sweetened and studded with homemade chocolate chips. You’ll want to make sure you’re using food-grade peppermint extract, NOT peppermint essential oil!