Paleo pot roasts are great because they often incorporate both meat and vegetables in pretty equal amounts. They’re also nice because you can leave it cook without having to babysit the stove. Many of these are made in a slow cooker or a roasting pan, allowing you to leave the roast unattended for hours while you attend to other tasks. Just when you can’t stand the delicious aroma of a pot roast any longer, it’s ready and you can eat! 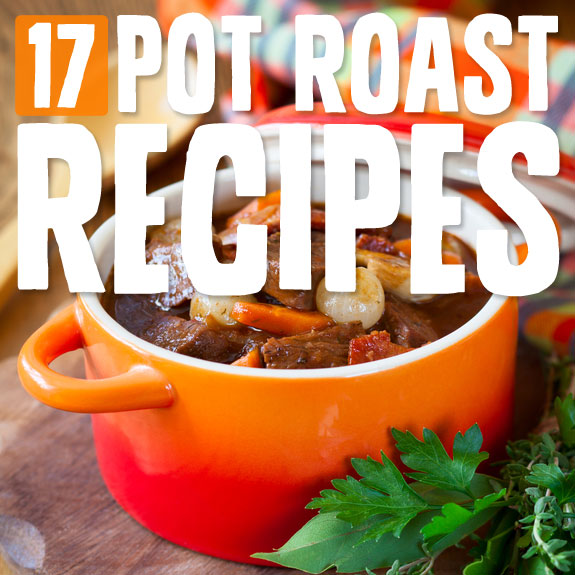 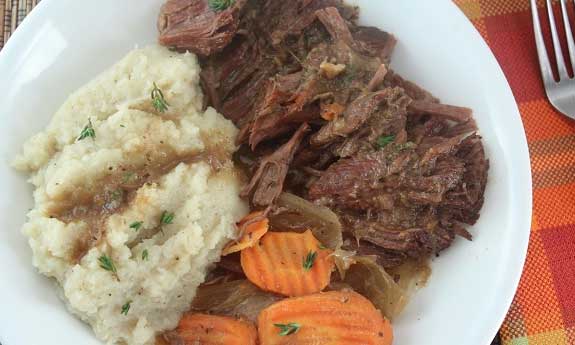 1. Pot Roast with Roasted Garlic Mashed Cauliflower
This pot roast looks like a traditional pot roast at first glance, but then you notice that the mashed potatoes aren’t potatoes at all, but cauliflower, making it all Paleo friendly and still delicious. Keep in mind that when you cook Paleo you’ll have to consider all of the elements to your meal, including the vegetables and other items. A traditional pot roast will have potatoes and carrots, but potatoes aren’t allowed on Paleo so you have to make adjustments. This is billed as a low-carb pot roast, something you don’t keep track of when on the Paleo diet.

2. Braised Paleo Bottom Round Roast
This is a Paleo pot roast if ever there was one, with big chunks of meat as well as hearty pieces of sweet potatoes and onions. There’s enough garlic to bring down a swarm of vampires, and she’s made sure to use grass-fed beef for the round roast. It’s important on a dish like this to make sure that all of your ingredients are very high quality. While it’s easy to find conventional round roast at the store, you may have to go out of your way a little and pay more to get a grass-fed round roast. Being selective is just part of eating Paleo, and something you’ll have to get used to if you aren’t already.

3. Tangerine Pot Roast
She says this pot roast will bring you good luck, and it’s made with tangerines, honey, onions, and of course meat. With the meat you have the option of using beef or venison, and she mentions that you can also use chuck roast. Venison would be a classic Paleo choice because it represents completely what our ancestors would have come upon in the wild, if they were lucky enough to. Venison will naturally be organic, eating their natural diet, getting exercise, and being in tune with nature. A pot roast is a great way to cook venison if you’re new to cooking game meat, as it’s pretty foolproof.

4. Crock Pot Balsamic Roast Beef
This pot roast recipe shows you how to add the delicious balsamic flavor to your meat, and it’s as easy as using balsamic vinegar. The vinegar also acts to make the meat tender and juicy, so it serves two purposes. Aside from that it’s a pretty basic recipe that only adds some onion, garlic, and a few more supplemental ingredients to get the job done. You could easily add carrots, beets, and other root vegetables into the slow cooker to make a complete Paleo meal. Remember that you’ll want to keep you ratio of meats to veggies at roughly 1:1, so always be thinking about what to serve up with your meat.

5. Boneless Pork Picnic Roast
Let’s shake things up a bit from the beef and see a pork pot roast recipe. This roast uses boneless pork, and is sure to come out perfect. They show this being cooked up with potatoes, and you can easily switch that to sweet potatoes for a complete meal without breaking any Paleo rules. The combination of ginger, apple cider vinegar, plums, and garlic is sure to infuse this roast with an amazing flavor. If you’ve never tried a pork pot roast this is a good place to start, as the roasting process makes the meat extra tender and cooked just right. 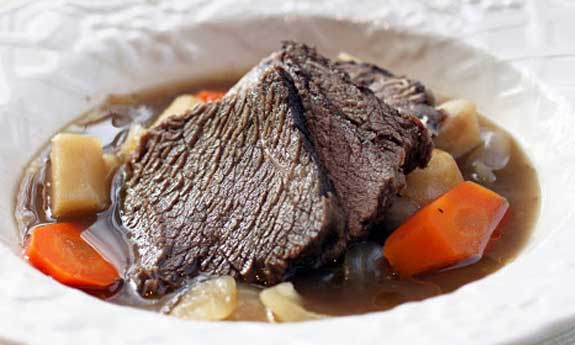 6. Certified Organic Pot Roast
This pot roast has a focus on using organic ingredients, especially with the meat. It also goes on to explain what certified organic means, and why it’s important, including the tidbit that the USDA considers corn a grass, allowing grass-fed beef to be labeled as such even if they were fed corn. The pot roast itself is trying to keep the same style as a traditional pot roast, with plenty of vegetables being cooked up simultaneously. Carrots, onion, turnips, and parsnips are added to accompany the meat, so you’ll be getting a full Paleo meal in one dish.

7. Dutch Oven Pot Roast
A Dutch oven is a classic cooking utensil and a great way to cook up a pot roast on Paleo. This selection is using plenty of meat, your choice of beef or pork, and combining it with a sauce made up of plenty of spices and herbs to give the meat a great flavor. The meat comes out tender and juicy, and then you place the sauce over it so it has extra flavor added. The great part about using a Dutch oven is that you’ll have plenty of room for lots of veggies and they’ll all come out cooked to perfection.

8. Cinnamon-Braised Beef Cheek
They’re using beef cheek here, which is a cut of meat that you might not have tried before. On Paleo you might find yourself cooking up all sorts of creations that you never thought you’d eat, but it’s all about exploring new foods and keeping that sense of wonder alive. Added to this roast is plenty of veggies in the form of an onion and butternut squash. They say the squash is optional, but we’d suggest going with it so you can have your entire meal cooked at once.

9. Crock Pot Puerco Pibil
One thing about Paleo you’re sure to love is tasting all of the different flavors of the world. Puerco pibil is a traditional Mexican dish that involves marinating the meat, so you’ll get flavor locked in as well as super tender meat. This version uses a combination of orange juice and apple cider vinegar for the acidic marinade. The other ingredients all conform to the Paleo food guide, as well as traditional way to make this dish. You’re sure to enjoy this if you are a fan of Mexican food in general.

10. Pot Roast In Foil
This pot roast recipe uses foil to save the day, making sure that your roast won’t dry out, and locking in the flavor. It also makes for an easier clean up, so it’s a winner all around. She says that this method is best suited for a rump roast or a chuck-eye, as these cuts are typically not as tender have a tendency to dry out if they’re not cooked properly. Eating Paleo will turn you into a meat cooking pro in no time when you have experienced chefs to help you along the way. 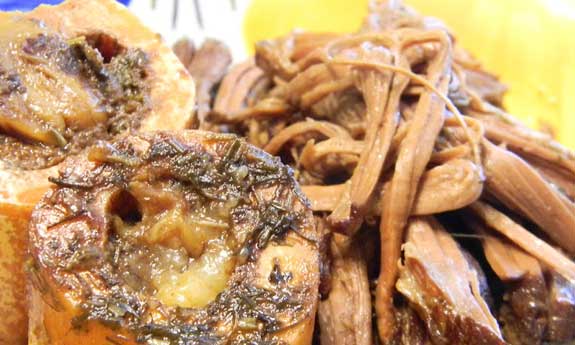 11. Grok Pot Bones and Beef
Here’s an interesting concoction which uses not only beef, but bones to get an amazing flavor. It’s no secret that cavemen didn’t let things go to waste, and that included the marrow from the bones from the animals they ate. This recipe cooks up marrow bones right alongside a hunk of chuck shoulder roast, and even includes a coating of bacon fat around the meat for enhanced flavor. He suggests keeping a ready supply of bacon fat by keeping the leftovers when you make bacon. Overall, a great recipe to have on hand, full of helpful tips for living the Paleo lifestyle.

12. Slow Cooker Pot Roast with Chunky Vegetables
Here’s a fitting example of what a Paleo meal should look like, big chunky vegetables sitting next to big chunks of meat. The best part is it’s all done in the slow cooker, so you don’t have to continually check to see how things are coming along. The veggies include celery, carrots, and your choice of root vegetables. The meat she’s using is chuck roast, but she also says that you can use whichever roasting meat you want as long as it’s cheap and fatty. Just make sure that it’s also grass-fed, which may entail spending a bit more on it.

13. Perfect Eye of Round Roast
You’ll marvel at how simple he’s kept things with this recipe, letting the meat do the talking. To flavor the meat he’s using salt and pepper, and a little thyme and garlic. It’s not just the ingredients he’s using that contribute to the taste of the meat, but the way it’s cooked. He provides you with a chart to help you with cooking times, and recommends using a meat thermometer so that you know when it’s done and don’t overcook it.

14. Cavegirl Cooks Pot Roast
This is an awesome Crock Pot pot roast recipe, and there’s plenty to savor with all she’s put into it. There are marrow bones which will give this an added depth of flavor as well as additional nutrition. Carrots, onions, and celery insure that this is going to taste like a classic roast. She’s using small red potatoes, but mentions in the ingredients list that these are optional. Following Paleo means leaving them out, and you can easily replace them with sweet potatoes or a root vegetable for the same effect.

15. Crock Pot 7-Bone Roast
As the name implies, this roast uses the 7-Bone cut, which is perfectly suited for a roast. What’s most interesting is the choice of ingredients used in this roast, which includes red wine, something we don’t often see in Paleo cooking. The alcohol in the wine will cook off during the roasting process so there’s no cause for concern, and it will help the meat come out tender and leave behind a subtle flavor. The other items on the list are pretty classic, with onion, carrots, and celery getting the nod. 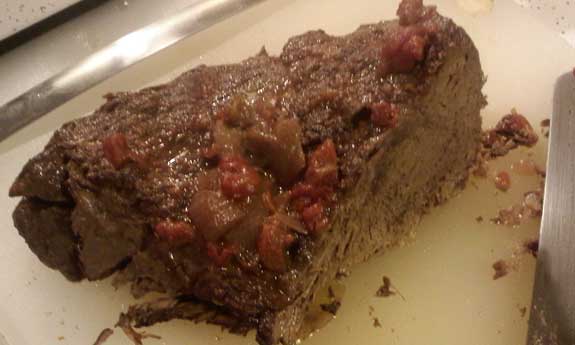 16. Stove Top Pot Roast
When they say this is a Stove Top pot roast they don’t mean the boxed stuffing you find in stores, but rather that you can cook the entire meal without using your oven. She has you searing the roast on all sides and then letting it slow cook on the stovetop for hours. There is a nice assortment of veggies with this, all Paleo friendly. You may have to babysit it a bit more than if you used a slow cooker or roasted it in the oven, but if you want a pot roast you can cook on your stovetop this is the best way to go.

17. Pot Roast in the Grok Pot
The Crock Pot should really be dubbed the Grok Pot when you’re eating Paleo because it is very reminiscent of the way they likely cooked back in the day of the caveman, albeit a modern day version. There’s only one item you’ll want to leave out to make this totally Paleo, and that’s the red potatoes. Even though potatoes are a classic pot roast staple, you’ll have to sub them out for root veggies like parsnips, or use sweet potatoes in their place for a similar texture.