Who doesn’t love Chinese take-out? It’s become a staple of fast-food cuisine practically all over the world and while I’ve heard that our Western idea of Chinese food is nothing like the real thing, I still love it. And one of my favorite dishes has always been pork fried rice. So why not turned pork friend rice into a Paleo-friendly meal by using cauliflower rice instead of actual rice? Now you can have even your favorite Chinese take-out meal and stay Paleo friendly. 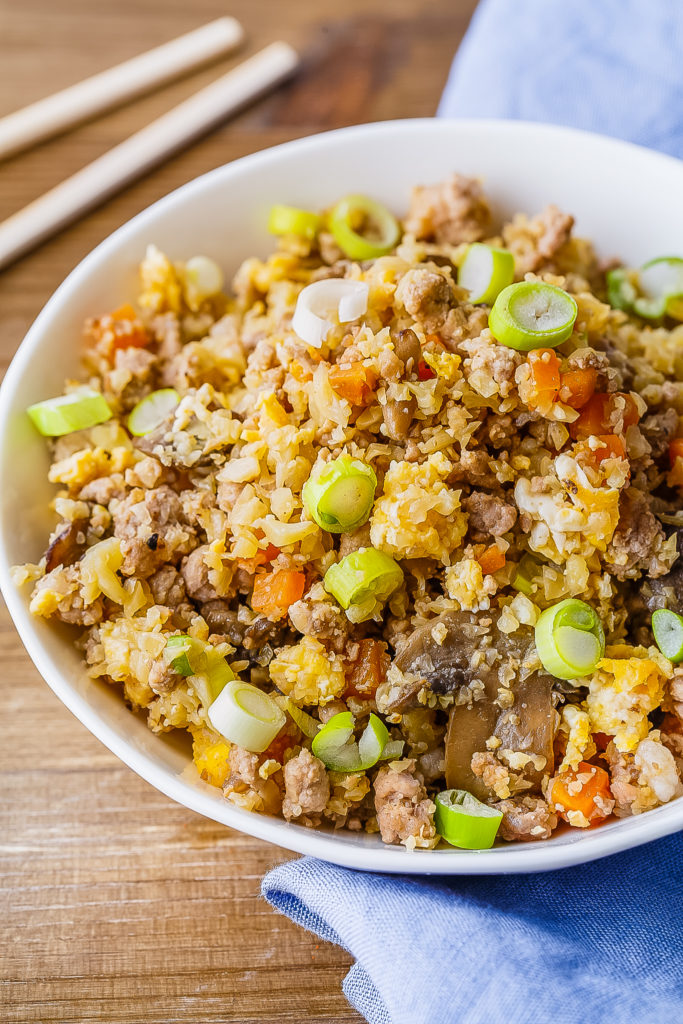 But here’s the catch – the basics of a Chinese food meal, except the rice, are fundamentally Paleo: meat and vegetables with big flavor. So crafting a few Chinese take-out substitutes was a jiff for me. And my first attempt – quite successful, if I do say so myself – was this recipe for Pork Fried Cauliflower Rice.

The most notable substitution in this recipe is obviously using the cauliflower rice instead of actual rice. Because you use the food processor to grind up the cauliflower when the veggie is raw, it creates little nubs of cauliflower that, when gently cooked, have a texture that’s very similar to rice. We all know that rice is a no-no when you’re eating Paleo, but just for grins, let’s compare it to cauliflower… 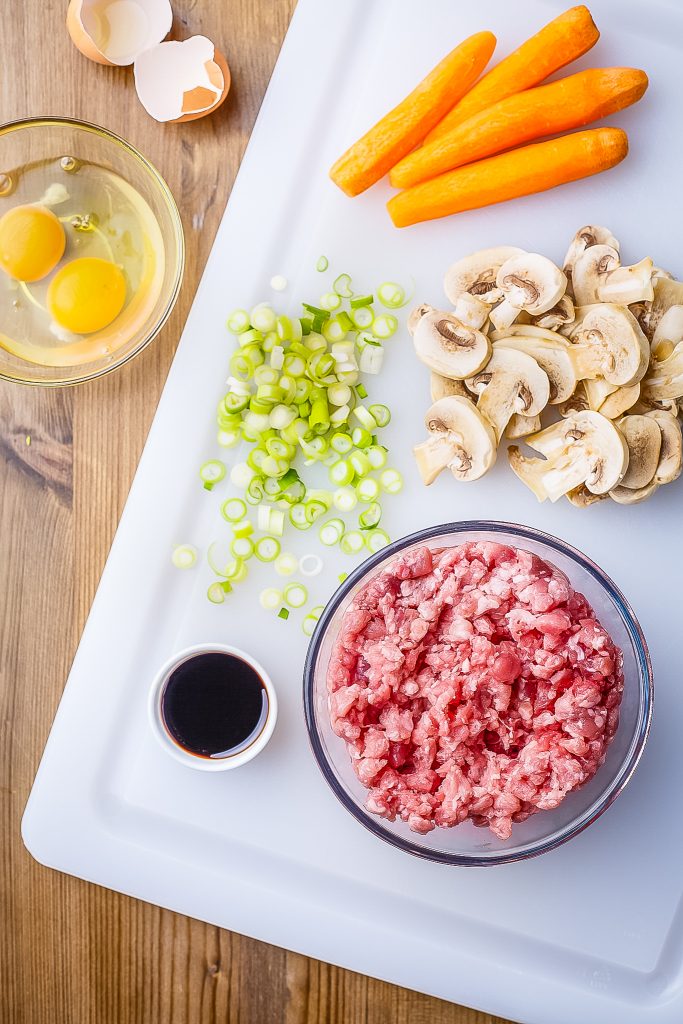 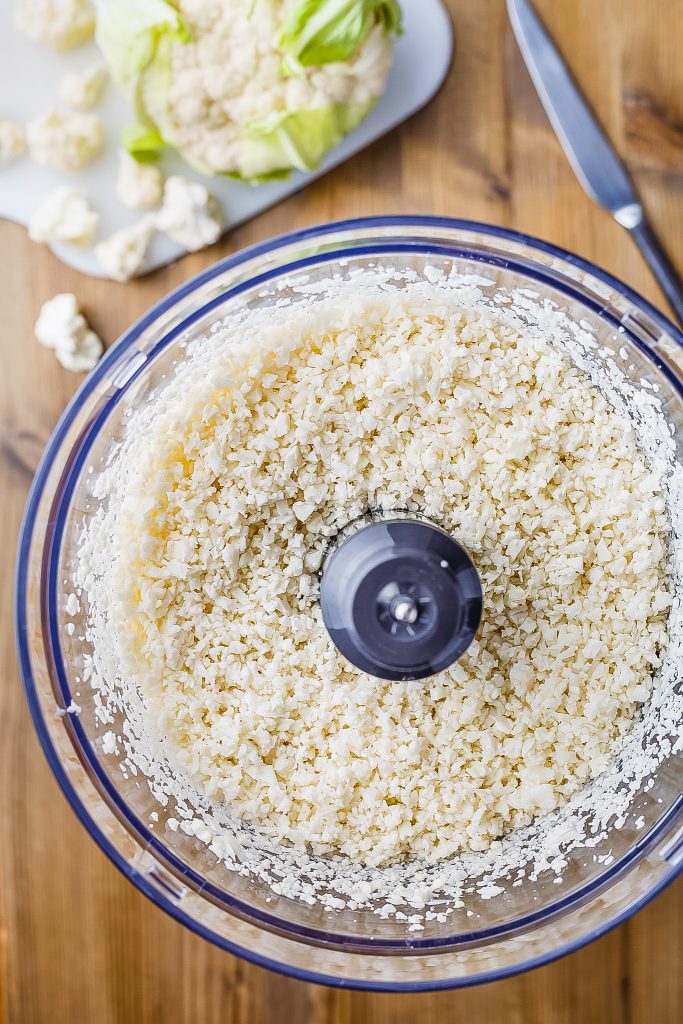 Your average white rice has about 200 calories a cup and is almost entirely carbohydrates. It has maybe .5 grams of fiber and a touch of protein – about 4 grams. A cup of rice will give you about 5% of your daily vitamin B-6 and a touch of magnesium, but that’s about it as far as nutritional value goes. Cauliflower rice, on the other hand, has about 30 calories per cup, only about 6 grams of carbs (compared to 45 grams in a cup of white rice), six times the fiber of white rice, about the same amount of protein, and more vitamins and minerals. For instance, one cup of Cauliflower rice gives you over 100% of you daily vitamin C. 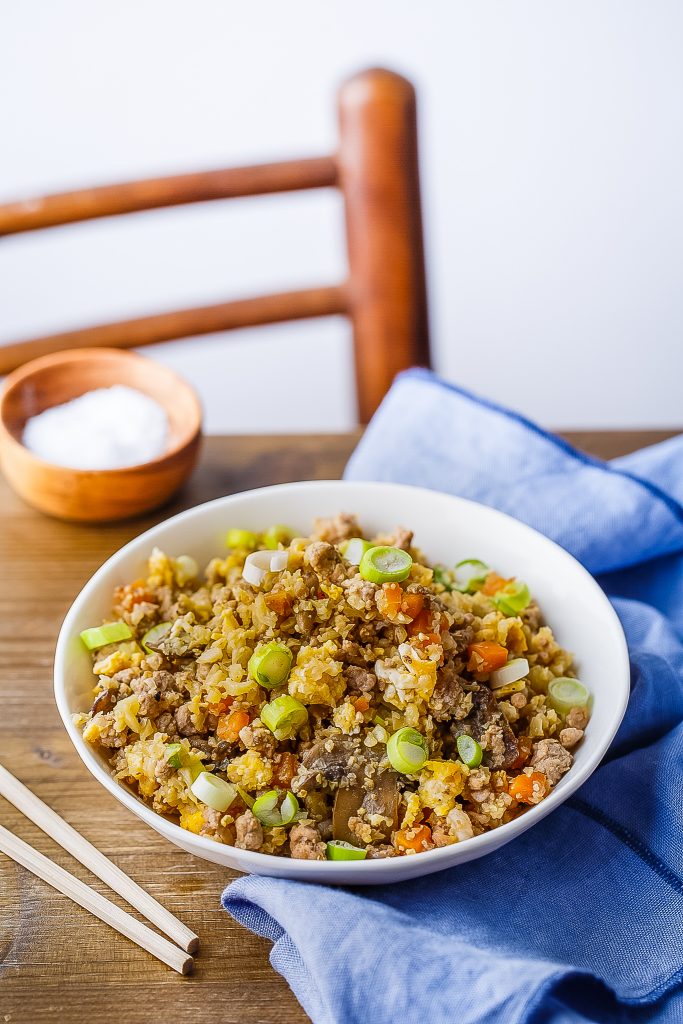 So not only can you see why cauliflower rice is a much healthier choice than white rice, this gives you a snap shot into why people often lose weight when they start eating Paleo: lower carbs, higher fiber, more nutrients, and typically lower calorie. In fact, one of the reasons we don’t really need to count calories when eating Paleo is because the food we eat is so filling and almost always had fewer calories than its non-Paleo alternative, that calories just aren’t something we need to constantly think about anymore. 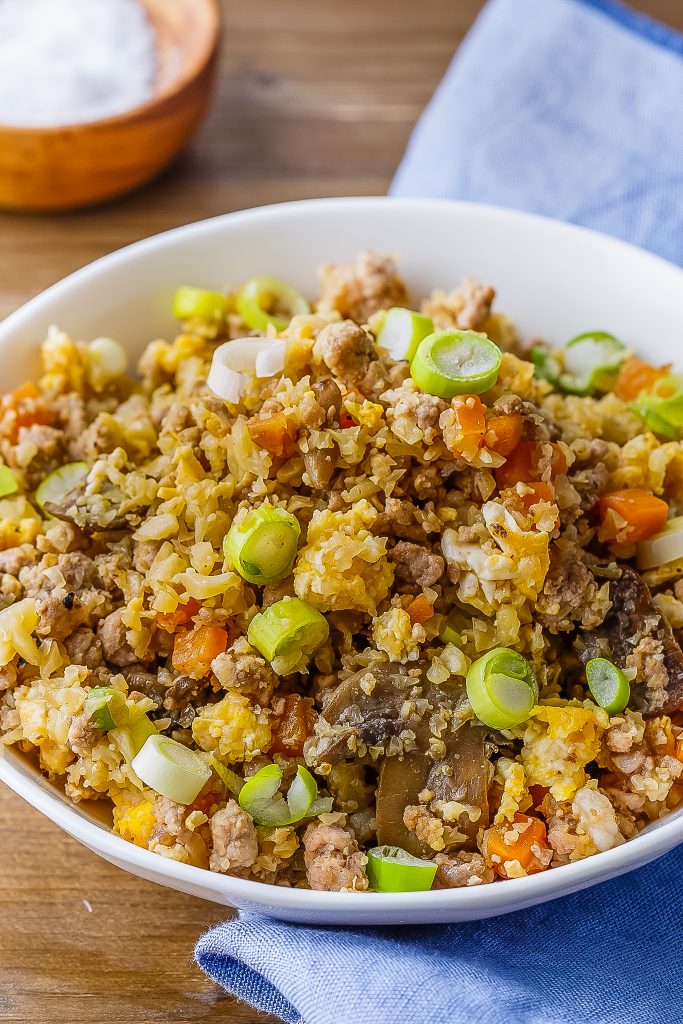 Of course, like any good Paleo dish, this one is also loaded with protein, in the form of ground pork, and vitamins and minerals, not just from the cauliflower rice, but also from the mushrooms and carrots. And feel free to break out of the recipe mold when it comes to the veggies. If you prefer, say, broccoli, have at it. Just keep the amounts close to the same so that the balance between meat and veggies is appetizing.

The only thing missing when you make this pork fried cauliflower rice are the Chinese take-out cartons. But if you really miss those, did you can order a set online? They even make washable and reusable ones! So now, your Paleo Chinese take-out delicacy is complete.