I love pears because they sort of similar in flavor to apples, but even better because their skin is soft and their flesh practically melts in your mouth. Pears are great in salads, baked goods, and juices, so you’ll definitely want to try out some of these paleo pear recipes.

1. Pear Tart
You can do this pear tart your way: bake it, or leave it raw! Either way, the ingredients are the same. You’ll make a paleo nut crust and full it with ground nutmeg, cinnamon, or cardamom, sliced pears, maple syrup, lemon juice, and a homemade caramel sauce for topping. 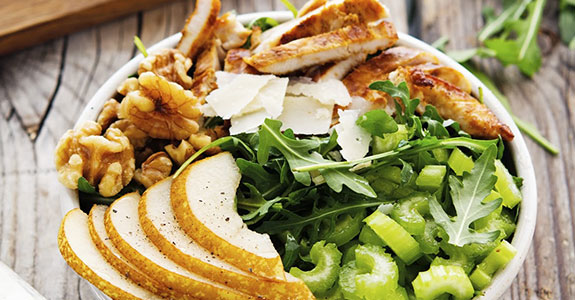 2. Grilled Chicken, Arugula, and Pear Salad With Toasted Walnuts
Made on a bed of arugula leaves with grilled chicken, lemon juice, ground black pepper, olive oil, sea salt, pears, celery stalks, and toasted walnut, this is the salad you’ll be looking forward to and your lunch break at work. Yummy and healthy, too.

3. Turnip, Potato, and Pear Soup
The pear in this soup is perfect, because it helps to complement and balance out the earthiness of the turnips. You can use either russet or sweet potatoes. Curry powder, coconut oil, shallots, and chicken stock add tons of flavor, healthy fats, and more to this dish.

4. Cacao and Pear Protein Smoothie
This smoothie has a rich chocolaty flavor with homemade almond milk, fresh pear, raw cacao powder, and vanilla protein powder. You can use whatever brand of protein powder you like best, or try the brand suggested along with the recipe.

5. Dried 5 Spice Asian Pears
Dried fruit is a great healthy snack or treat, and it’s easy to make on your own if you have a food dehydrator. These pear rings are seasoned with Chinese 5 Spice powder, and a hint of lemon juice keeps them from turning brown while they’re dehydrating. 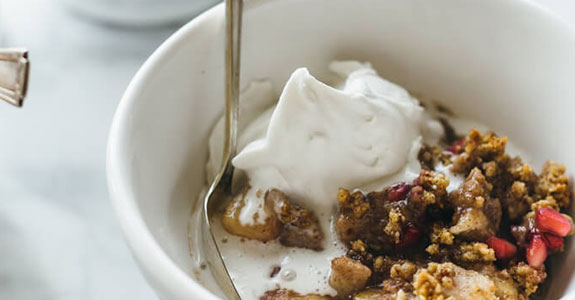 6. Pear, Pomegranate, and Maple Crumble
This amazing crumble is more than just your typical peachy pile of goodness. Instead, it has a unique combination of pears and pomegranate seeds, it’s maple-sweetened, and the topping is perfectly crumbly with pecans, almond flour, cardamom, vanilla, and coconut oil.

7. Paleo Pear and Cranberry Muffins
Paleo muffins can be tricky to get right because of the texture, but this batch does it well with almond flour, cinnamon, sea salt, eggs, melted butter or coconut oil, winter pears, lemon juice, honey, and fresh or dried cranberries. They’re healthy enough to enjoy for a breakfast on the go!

8. Pear Chocolate Granola Bars
While pears seem like an underrated fruit to me, pear and chocolate is one of my very favorite fruit-and-chocolate combos. These granola bars are perfect with paleo-friendly granola (your choice of recipe), tahini, dark chocolate, coconut oil, honey, and pears. 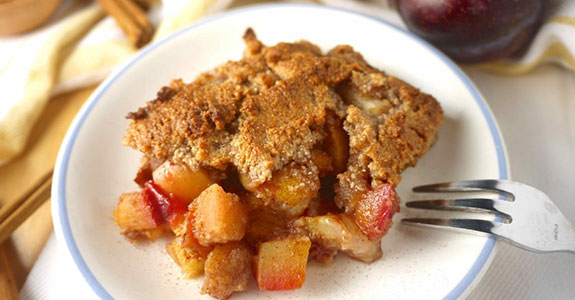 Photo: Per Chance to Cook

10. Plum, Pear, and Apple Grain-Free Crumble
The tart plums and sweet pears and apples in this dish meld together to form the most wonderful combination of flavors, along with cinnamon, honey and maple syrup to sweeten, and a crumbly topping of almond flour and healthy coconut oil.

13. Slow Cooker Spiced Pear Sauce
I love pear sauce even more than applesauce, and this deliciously silky slow cooker version is perfect with star anise, cinnamon stick, and vanilla bean. Apples are mixed in, too, and the vanilla beans gives it an almost creamy, amazing flavor without any added sweetener. 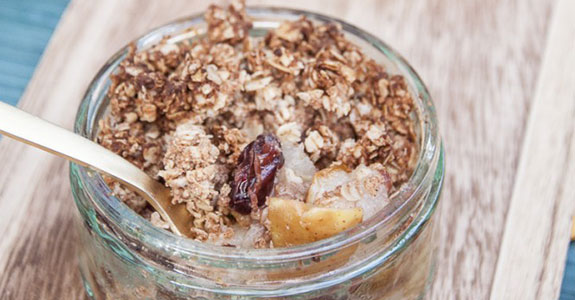 15. Pomegranate Spinach Salad With Apple Cider Vinaigrette
This super simple salad is made with baby spinach, pear, pomegranate seeds, and (optionally, if it’s a part of your diet) goat cheese. The apple cider vinaigrette is one of my favorites, with garlic, Dijon mustard, apple cider vinegar, lemon juice, olive oil, salt, and white pepper.

17. Caramelized Bosc Pears With Coconut Whipped Cream
You don’t need to get super fancy to put together an elegant dessert. This one is super simple and relies on the nature sugars in the pears, along with butter, cinnamon, nutmeg, cardamom, and a dash of ground cloves. Serve with vanilla whipped coconut cream sweetened with stevia. 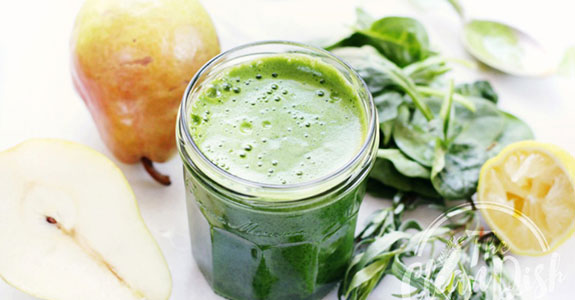 18. Pear, Spinach, and Fresh Tarragon Juice
Apples seem to be the most popular juice as a way to sweeten green juices, but pears make just as great of a sweetener! Even better, possibly, because they’re naturally sweeter than apples and have a lovely flavor. Add spinach, tarragon, and lemon for a nutritious snack, and juice away!

19. Sparkling Apple Pear Cider
Sparkling ciders are the perfect family-friendly way to celebrate any occasion, whether it’s New Years, a birthday, or a Friday night after a long and stressful week. T make this, you only need pears, apples, and sparkling water. If you’re feeling fancy, add a bit of cinnamon or cardamom.

21. Mint and Pear Juice
In this recipe, a whole handful of fresh mint adds to the refreshing combination of pear, celery, limes and kale. This juice is nutritious and super tasty, and it’s a beautiful shade of ombre green when it begins to settle. It’s best if you drink it right away! 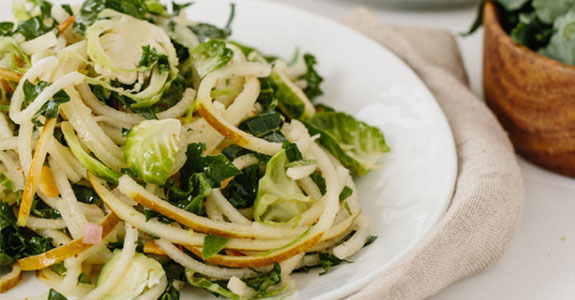 23. Paleo Baked Pears
Here’s an amazing baked pears recipe that kind of reminds me of a pear crisp, but in a pear instead of a dish. Delicious! You’ll need bosc pears, honey, cinnamon, nutmeg, coconut milk yogurt, vanilla bean paste, coconut sugar, and chopped pecans. I want one of these right now!

24. Paleo Pear-Ginger Cranberry Sauce
Homemade cranberry sauce is one of my favorite parts of Thanksgiving, and I love it so much that I won’t wait until November to make it. This recipe is perfectly tart and naturally sweetened with pears and honey, and accented by a solid amount of fresh, spicy ginger.

25. Pear Ginger Muffins
These pear muffins are rich in protein from the eggs, coconut, and almond flours. You’ll also need ghee, coconut oil, or butter, maple syrup (optional, if you need them sweeter), and freshly grated ginger. The topping is rumbly and amazing with pecans and shredded coconut. 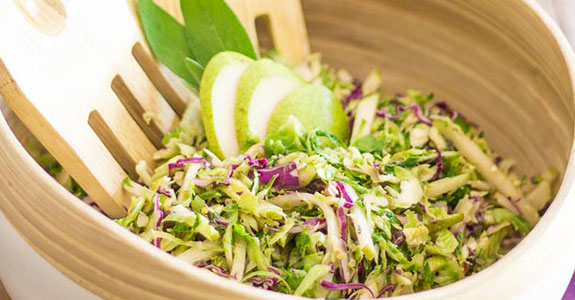 26. Brussels Sprouts and Anjou Pear Salad
This salad is simple on the surface, but impresses with lots of texture and flavor. Start with Brussels sprouts, red cabbage, and pears, and add raisins, pecans, macadamia nuts, sage, thyme, and a dressing made with Dijon mustard, honey, garlic, and balsamic vinegar.

27. Pear and Candied Walnut Prosciutto Chicken Salad Sandwiches
There are lots of adaptations in this recipe for Whole30 and other special diets, but no matter how you’re eating these days, you’re going to love it. You’ve got prosciutto, green onions, pears, walnut, chicken, and grain-free rolls for making the sandwiches you’ve been missing so desperately.

28. Pear Ginger Lime Green Smoothie
If you’re a green smoothie newbie or just a plain old skeptic (or you’ve got picky kids), this is the perfect start green smoothie. Because its main flavors of mango, pear, and ginger, the mild greenness of the spinach is balanced. The coconut water is hydrating, too! 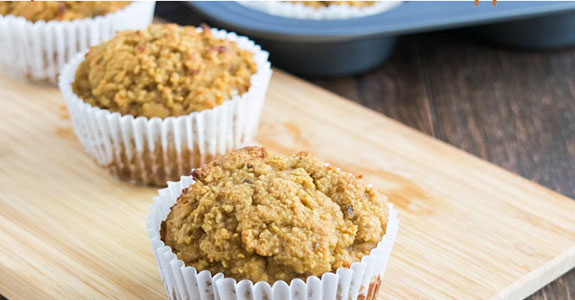 30. Grain Free Pear Flax Muffins
Made with a base of eggs, coconut flour, and golden flax meal, these nutritious muffins are the perfect way to start your morning, especially if you only have time to grab something as you run out the door. The ginger adds a spicy zing to complement the naturally sweetness of pears and maple syrup.

31. Orange Chai Poached Pears With Cardamom Coconut Cream
Poached in chai sweetened with orange, cinnamon, and honey, these pears are served with a cardamom-vanilla coconut cream sweetened with honey and topping with a silky raw cacao glaze. Crushed a handful of pistachios and crumble them over the top for a truly beautiful dessert.

32. Chocolate Dipped Pears
This recipe is so simple I can hardly call it a recipe, but sometimes an idea and some tips is all you need! These pear slices are dipped in super-dark chocolate and coated with crushed nuts, pomegranate seeds, shredded coconut, or anything else you can think of.

33. Grilled Banana and Pear Breakfast Salad
This recipe is so tasty and unique, and the great thing is that while the fruits have a great grilled flavor and caramelization, you don’t need to fire up the grill outside just to make breakfast. You’ll “grill” the fruits with cinnamon, honey, and fresh mint on your cast iron skillet! 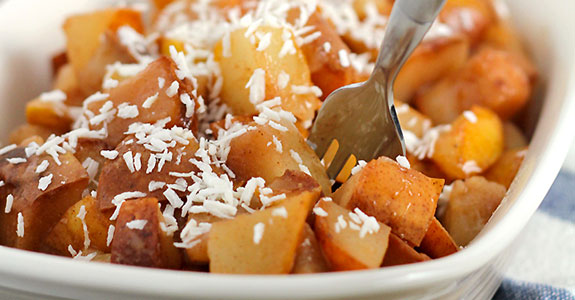 34. Simple Baked Pears
If you love the sweet and gooey caramelization of cooked pears but you don’t want to handle the details of poaching and other techniques. All you need for this version is pears, coconut oil, shredded coconut, and seasonings like cinnamon and nutmeg. Not even any sweetener!

35. Vanilla Bean Chia Porridge With Caramelized Pears
If you like chia pudding, you’ll love this extra-fancy porridge recipe with a base of vanilla chia porridge with sea salt and coconut milk topped with pears sautéed in butter with coconut milk and ground cinnamon. Now this is a breakfast you’ll really look forward to!

36. Paleo Rustic Pear Galette
A galette is a great dessert to serve to guests, because it looks so impressive, but it’s basically a pie for people who can’t be bothered to make things look perfect. This one is made with a coconut butter and maple syrup crust and a delicious cinnamon pear filling.

37. Pear Blueberry Smoothie
This smoothie only has a few ingredients, but it’s tasty, sweet, and nourishing. You’ll need a big pear, frozen blueberries, unsweetened coconut milk, and vanilla protein powder. If the coconut milk is a bit rich for you (it sometimes is for me), almond milk would also be great. 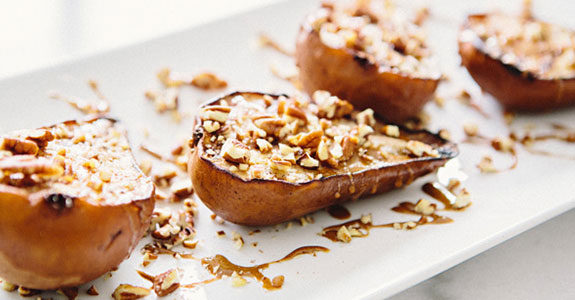 Photo: A House in the Hills