Stuffing has always been my favorite part of the Thanksgiving table, and I’m willing to bet I’m not alone. You have to admit it has a certain appeal that you miss when you can no longer make it part of your own plate. These use vegetables, meats, and sometimes Paleo breads for the flavors and textures you love most about stuffing. 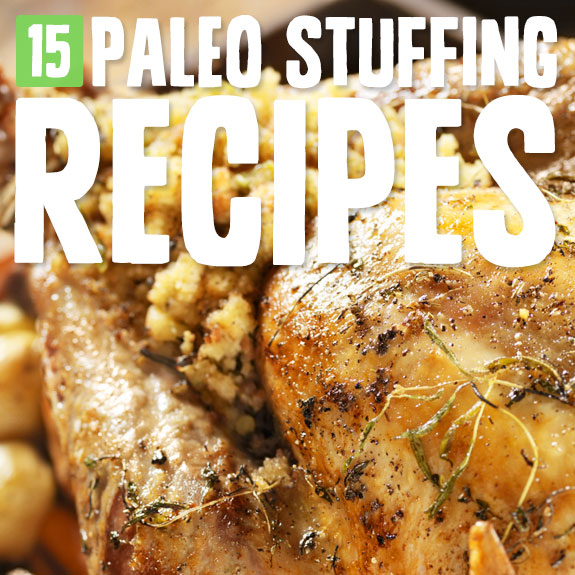 This stuffing is made with sausage, vegetables, and herbs, with a base of a special maple cornbread stuffing. Obviously, we’re not talking about real cornbread, but a Paleo version that works well as a replacement but doesn’t have any corn or grains. 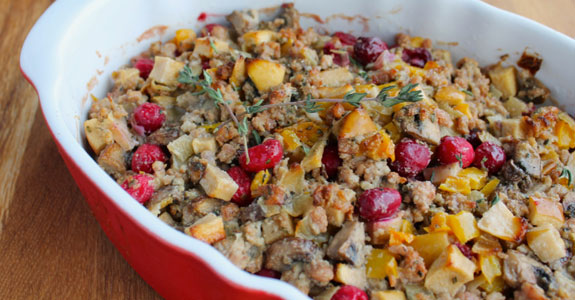 This perfect Thanksgiving stuffing is full of all the right flavors and textures you look for in a good stuffing, but without any of the grains, dairy, or other non-Paleo ingredients that are always on the table. Cranberries, ground pork, pecans, chicken stock, and other ingredients ensure an amazing flavor.

This version of Paleo stuffing is made with sweet potatoes, pork, bacon, pecans, cranberries, and other fantastic ingredients to give the right amount of crunch, crisp, and chew to your stuffing, while keeping it healthy and nourishing.

Again, we’re talking about a corn-free substitute (recipe included). This one uses the cornbread recipe along with pork sausage, onion, celery, and other stuffing typicals (the good ones only!), with plenty of pepper and sage, and eggs to keep things together.

This recipe reminds me of the stuffing I was always in charge of making as a kid. It has no meat in it (though I might recommend adding some bacon), but it gets rich and delicious flavors from onion, apple, dates, and rosemary. Almond flour gives this the right stuffing texture. 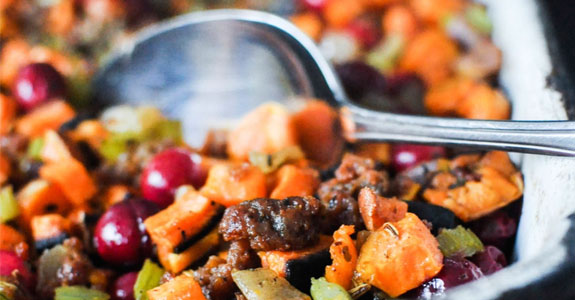 You won’t even miss the bread in this buttery-good stuffing with celery, garlic, onion, sweet potatoes, and fresh cranberries. The extra steps of sautéing the garlic in the butter (or coconut oil) are worth it, and really make this recipe stand out from the others.

For this recipe, you’ll need to make Paleo cornbread (recipe included) with a few minor adjustments in the flavor department, and add it to this fantastic stuffing full of apples and onions, and the spicy, warm flavor of cumin to give things a bit of a different spin.

This stuffing doesn’t have any bread substitute, but uses vegetables and meats for plenty of flavor. Sausage, onion, celery, cauliflower, walnuts, herbs, and other ingredients blend together for lovely flavors and aromas that will take you right back to the family gatherings of the past.

This Christmas-flavored stuffing uses cinnamon, ginger, apple juice, and a grain-free bread recipe combined with the umami flavors of garlic for a full-bodied stuffing experience that’s savory, a bit sweet, a bit spicy, and completely delicious. 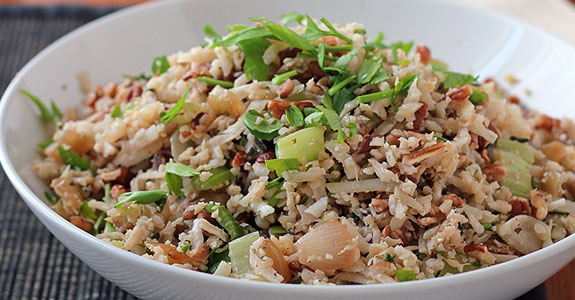 This stuffing might get its flavors from the nuts and herbs, but its true standout ingredient is cauliflower “rice.” The raw cauliflower rice gives it the right texture to become stuffing without overpowering the more flavorful ingredients that really want to shine in this recipe.

This stuffing does have meat, but it’s a bit different than the bread-based versions, or those that try to replicate them. This stuffing is made with turnips, sweet potatoes, and other vegetables for high nutrition and perfect flavor.

That’s right—plantains! This is a simple recipe with chicken broth, onions, mushrooms, Brussels sprouts, seasonings, and a homemade plantain bread that has just a few ingredients and cooks up quickly. Its unique flavors are completely real-food based, and just plain good.

This mushroom, sweet potato, apple, and sausage based recipe uses sage, rosemary, and thyme to create the ideal Thanksgiving flavor profile. Of course, it would be perfect for any holiday gathering! And it comes together easily, with no Paleo bread to make beforehand. 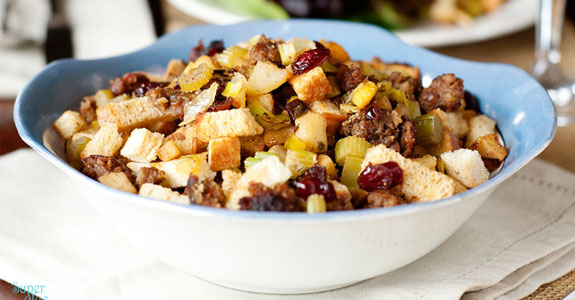 Here’s another buttery stuffing to add to your table—this one has Italian sausage, leeks, tart apples, walnuts, sweet potatoes, mushrooms, celeries, and other perfect stuffing ingredients for everyone to enjoy—even your friends and family who aren’t Paleo!

This stuffing is made from root vegetables like parsnips and carrots, and has a meaty, umami flavor from the chopped mushrooms (as well as added nutrition). Fresh herbs add color as well as flavor, and I prefer using them over dried herbs when possible.