Float them in your hot chocolate, spread them across a sweet potato casserole, or eat them as an occasional treat. You’re sure to find your new favorite marshmallow recipe among those on this list. 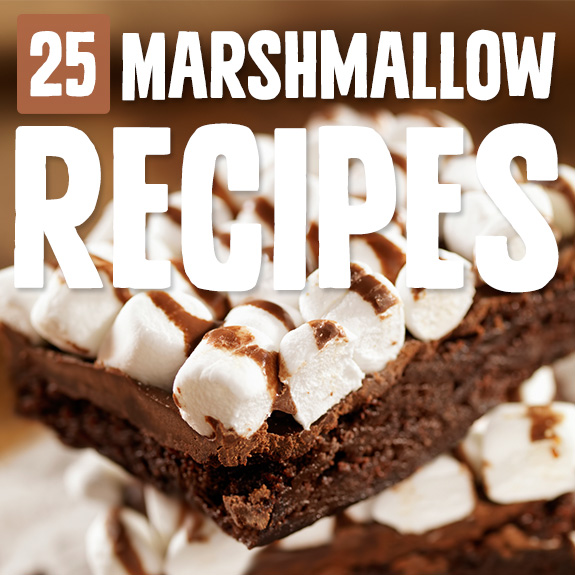 1. Chocolate Covered Peppermint Marshmallows
Here’s another honey-sweetened mallow, but this one’s even fancier. It’s flavored with both vanilla and peppermint extracts and then rolled in a combination of chopped chocolate and organic, corn-syrup free candy canes. If you can’t find paleo-friendly candy canes, just use the chocolate alone. 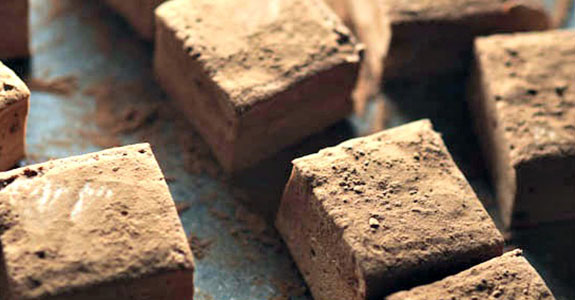 2. Chocolate Marshmallows
These delicious marshmallows are more than your standard Jet Puffed little pillow. They’re chocolate! Sweetened with honey and flavored with cocoa and vanilla, these little gelatin bombs are a sweet treat while also offering some health benefits to your digestive system.

3. Chocolate Cupcakes With Toasted Marshmallow Topping
Ever wanted to learn how to make those delicious marshmallow-frosted cupcakes? I bet you did—and then you went paleo and thought they’d never happen. Well, think again. These awesome chocolate cupcakes are grain-free and topped with a fluffy and decadent marshmallow. You can also spread the fluff and just make marshmallows alone!

4. Cinnamon Paleo Marshmallows
These marshmallows are perfect for floating in the top of your Mexican hot cocoa. With their cinnamon dusting and their combination of honey and maple syrup sweetening, they have a lovely and delicate vanilla flavor with a tiny hint of sea salt. The sea salt really brings out the cinnamon flavor!

5. Healthy Low Carb Marshmallows
If you’re looking for an extra low-carb marshmallow made without any sugar, this is your recipe. These marshmallows are made with egg whites, gelatin, vanilla, stevia, a low-carb granulated sweetener, and coconut flour for coating. These are dipping in chocolate and sprinkled with coconut, too! 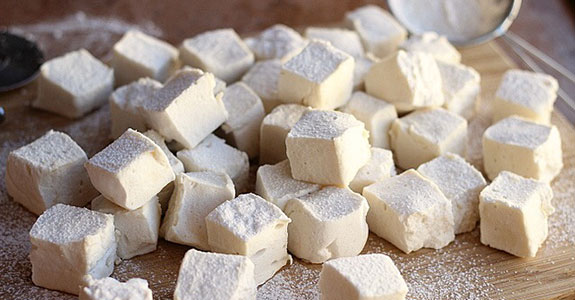 Photo: Oatmeal With A Fork

6. Honey and Stevia Marshmallows
These marshmallows are sweetened with a combination of honey or maple syrup and stevia, so they have a lovely honey or maple flavor (I’d go with maple, but it’s your pick) without too much of the sugar. The stevia does the rest of the work and the sea salt and vanilla round out the flavors.

7. Fluffernutter Chocolate Cups
Looking for a way to use your marshmallows, now that you’ve got a few recipes? Try this recipe for fluffernutter cups made with almond butter and coated in allergy-free chocolate chips. You could also use sunflower seed butter if you need the cups to be nut-free. I’d love to sneak one or two of these in my lunch to take to work.

8. Homemade Miniature Marshmallows
These tiny marshmallows are just begging to be sprinkled over your homemade coconut milk hot chocolate. They’re sweetened with honey and maple syrup, and you can even make your own paleo powdered sugar to give them that dusty marshmallow coating.

9. Pink Beet Marshmallows
I love both the creativity and the pretty pink color of these marshmallows, which are dyed with beet juice and absolutely gorgeous. Because they’re sweetened with maple, they don’t taste like a roasted beet, but they do have a subtle earthy flavor you’ll love. And they’re healthy, too! 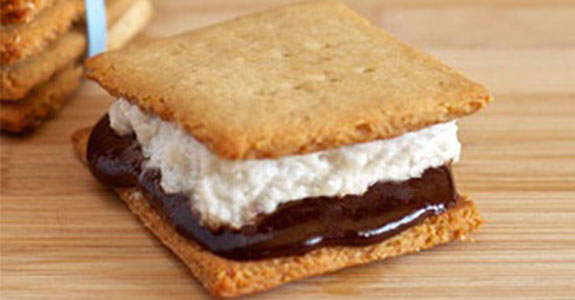 10. Totally Homemade S’mores
If you want the whole shebang happening in your kitchen, try this recipe for completely homemade s’mores from the graham cracker to the marshmallow. In full disclosure, the chocolate isn’t homemade, but you could certainly do that yourself, too! I have a feeling these are going to be happening next movie night.

11. Marshmallow Root Marshmallows
These mallows go back to their roots. Marshmallows were first made as medicine, because the roots from the marshmallow plant are soothing to the throat. Modern marshmallows aren’t medicinal or made with actual marshmallow, but this recipe is! They’re perfect for a sore throat

12. Probiotic Healthy Marshmallows
These marshmallows are sweetened with honey and have the option of adding marshmallow root powder and probiotics to make the marshmallows healthy for your body. The recipe will work without them, so if you don’t have those, no worries!

13. GAPS Marshmallows
Suitable for the GAPS, paleo, and SCD diets, these healthy marshmallows have only a few ingredients and are simple to put together. You’ll just need water, grass-fed gelatin (Great Lakes and Vital Proteins are both good brands), honey, vanilla, and sea salt. 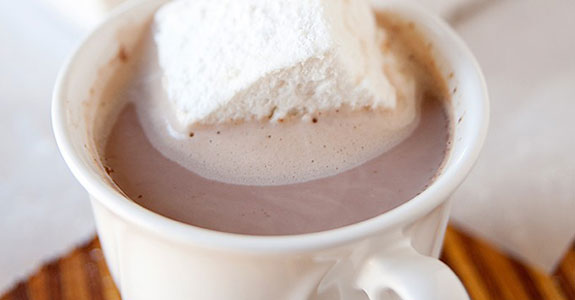 14. Easy Homemade Honey Marshmallows
These marshmallows have a lovely vanilla flavor and are sweetened with light colored honey—you could really use any honey, but they’ll keep their lovely white color if you use light honey or even light maple syrup. Use grass-fed gelatin for the best nutrient value.

15. Piping-Friendly Marshmallow Fluff
This marshmallow fluff will set after you make it, but it’s soft enough that you can pipe it in different shapes and roll them in cinnamon powder, cocoa powder, or shredded coconut to keep them from being sticky on the outside. Experiment with extracts, too!

16. Paleo Marshmallow Bars
These marshmallow bars make a great snack/treat, sweetened with honey, flavored with vanilla, and topped with all manor of your favorite toppings. The recipe recommends chocolate chips and slivered almonds, but you could also use dried fruits and shredded coconut! I love this idea.

17. Maple Marshmallows
These yummy maple-sweetened marshmallows are flavored with vanilla extract and dusted with tapioca flour. The recipe also calls for confectioner’s sugar for dusting, and this would obviously be a paleo exception—just use the tapioca alone, or make your own powdered coconut sugar. 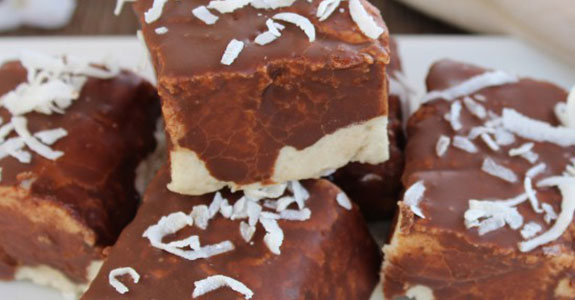 18. Chocolate Covered Marshmallows
Who doesn’t love marshmallows and chocolate? This simple honey-and-maple sweetened marshmallow recipe includes cinnamon and a chocolate coconut oil glaze. These make an awesome snack on their own or a melty addition to homemade hot cocoa.

19. Toasted Marshmallow S’more Tart
This dessert is amazing, and I’ve already decided it’s going to be my birthday cake this year. The decadent filling is made from coconut milk, chocolate, maple, cacao butter, a bit of brewed coffee, and vanilla bean. The topping uses egg whites instead of gelatin, and it’s made meringue-style. I bet this would be perfect for serving to guests!

20. Gingerbread Marshmallows
It’s always the right time of year for gingerbread—I don’t care what you say. How could I resist the combination of cinnamon, ginger, nutmeg, and cloves? These marshmallows are full of gingerbread flavor and they’re sweetened with maple syrup and honey.

21. Cara Cara Orange and Levity Marshmallows
These marshmallows are made to help you feel happy and joyful! The cara cara orange flavor is delicious, and the Levity helps to encourage the feel-good chemicals in your brain to get going. For safety, try a quarter teaspoon or orange extract in place of the essential oil. 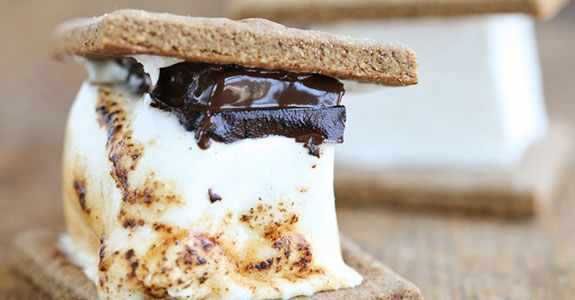 22. Grain Free Graham Crackers With Honey-Vanilla Marshmallows
These amazing s’mores are made with homemade almond and coconut flour graham crackers, sweetened with honey and molasses and flavored with cinnamon and coconut milk. The marshmallows only have 4 ingredients, so they’re super easy to whip up. Use your favorite paleo-friendly dark chocolate and have s’more.

23. Perfect Vanilla Bean Marshmallows
I love all of the flavored marshmallow recipes here, but my personal favorite is good old vanilla bean. These marshmallows have an amazing flavor from a scraped vanilla bean, and you could use a combination of honey and maple to prevent their flavors from overwhelming the vanilla.

24. Date Syrup Marshmallows
Most of the recipes I’ve shared so far are sweetened with honey, maple syrup, or a combination of the two. But you can sweeten your marshmallows with date syrup, too, which gives them a caramel-like flavor. This simple recipe also uses vanilla and sea salt.

25. Vanilla Bean Coffee Marshmallows
These. Are. Amazing. These marshmallows are perfect for melting in a mug of hot chocolate to create an awesome mocha effect. That is, if you can stop just eating them plain! The combination of vanilla bean and cold-brewed coffee is to die for.