There’s a reason we often turn to cereals and other convenience items for breakfast: who feels like cooking in the morning? Some mornings I love to make a big hot breakfast, and other days I’m not feeling it. On those days, I turn to paleo granola with some fresh fruit and almond milk, and I always make my own with one of these recipes.

1. Crunchy Grain Free Granola
I’m sold on this granola easily between the cinnamon, vanilla, and dark chocolate. Absolutely delicious. We’ve also got macadamia nuts, shredded coconut, and chia seeds adding variety to the texture without the use of oats or other grains. This recipe is a winner!

2. Homemade Gingerbread Granola
This granola tastes strikingly like gingerbread cookies, with flavors like cinnamon, ground ginger, cloves, maple syrup, vanilla extract, and molasses. Molasses is also rich in iron and other minerals, so it’s adding some extra nutrition to your delicious breakfast.

3. Keto Granola Dust
Granola “dust” is just a way of saying this granola has a less-clustery texture in favor of a looser mixture that clings to fruit when you douse it with almond or coconut milk. This version is made with sesame seeds, hemp hearts, shredded coconut, and chia seeds with vanilla and stevia. 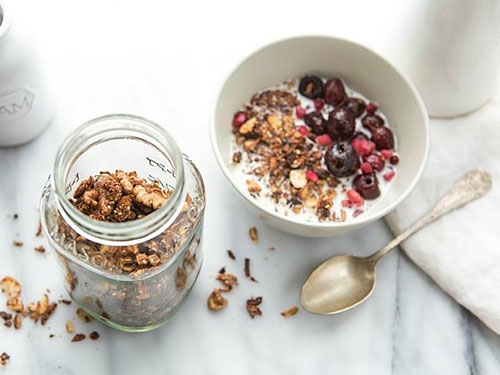 6. Grain Free Granola Cereal
I often have granola for breakfast because it’s so convenient on a busy morning. So I love really nutrient-dense recipes, like this one with walnuts, pecans, sliced almonds, hemp seeds, shredded coconut, plant protein, cinnamon, honey, vanilla, and cacao nibs with coconut oil for healthy fats.

7. Banana Split Granola
This granola tastes like a banana split without the dairy and sugar! It’ll become your new favorite breakfast, and even the kids will prefer it over grainy cereals. Make it with cashews, pecans, banana chips, hemp seeds, coconut, vanilla, banana puree, honey, freeze dried strawberries, and chocolate chunks.

8. Orange, Cranberry, and Pecan Granola
The flavors in this recipe remind me of the holidays, with walnuts, hazelnuts, pecans, dried cranberries, shredded coconut, vanilla, orange zest, orange juice, and honey. I used to underestimate the flavor value of orange zest added to granola, until I tried it!

9. Slightly Sweet Grain Free Granola
Even grain-free granolas are sometimes overloaded with sweeteners, though I try to share the modestly sweetened ones here. This recipe is an example of one that uses banana as the sweetener, with other ingredients like vanilla, coconut butter, and lots of seeds. 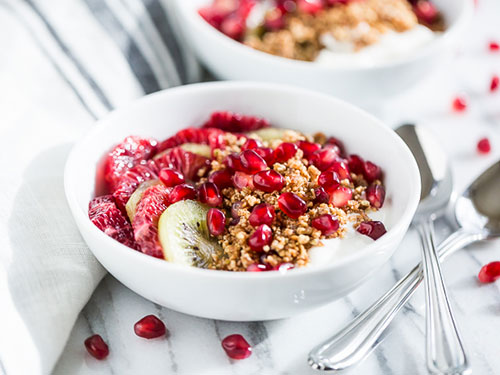 10. Paleo Cinnamon Granola Dust
This granola dust is full of strong and delicious flavors like orange zest and Vietnamese cinnamon. This combination gives it a sort of holiday flavor, which goes really well with the base of pecans, big coconut flakes, pumpkin seeds, almonds, and dried fruit.

11. Simple Paleo Granola
This paleo granola recipe is super easy without anything fancy—just your basic dry ingredients plus a sweetener and a healthy fat. In this case, we’ve got slivered almonds, shredded coconut, sunflower seeds, pepitas, coconut oil, honey, and vanilla extract.

13. Toasted Coconut and Berry Grain Free Granola
My favorite part of this recipe is that the berries are baked right into the granola, which means that their flavors infuse into the granola for a super berry-rich flavor. The addition of ground ginger adds a deliciously spicy flair, while maple syrup is the perfect sweetener. 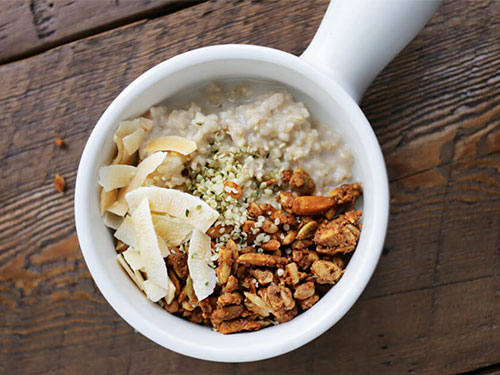 14. Paleo Granola All Week
Made with nuts and seeds, ground flax, sunflower seed butter, honey, sea salt, and cinnamon, this paleo granola recipe comes with lots of ideas for enjoying it and making it last all week long, like parfait or having it plain with almond milk and chopped fruit (my personal favorite).

15. Chocolate Fudge Coconut Granola
Yes, you absolutely can enjoy this fudge granola for breakfast. Of course, it makes an awesome dessert of afternoon snack as well. First you mix up a super-simple granola of mixed nuts, chia seeds, and coconut, and then you bake it with a silky fudge sauce.

16. Grain Free Cranberry Nut Granola
With coconut oil and an assortment of nuts, this granola is full of protein and healthy fats that will help nourish your body and keep you full until lunch time. Optionally, you can add pumpkin seeds, coconut flakes, and raisins.

17. Grain Free Hippie Granola
And what makes it hippie granola, you might ask? All the hemp seeds! This recipe features of a full cup of them along with raw almonds, pumpkin seeds, pecans, walnuts, shredded coconut, cinnamon, maple syrup, chopped dates, vanilla, and sea salt. 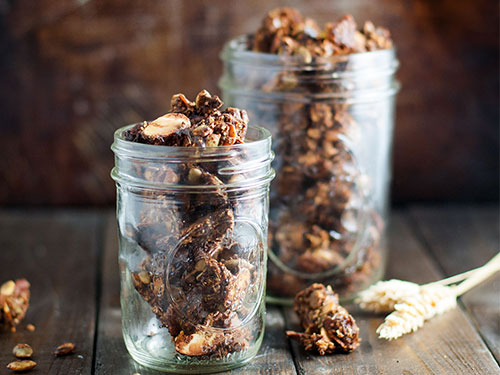 18. Paleo Pumpkin Spice Granola
Pumpkin spice granola is perfect for fall and winter, with warming flavors like vanilla, cinnamon, nutmeg, ginger, and cloves. Maple syrup goes really well with the pumpkin flavor, and this one even has chocolate chips to add an extra treat to your morning bowl.

19. Grain Free Apple Pie Granola
This granola tastes a lot like apple pie with the heavenly combination of apple and cinnamon as well as ginger, cloves, allspice, and more It’s sweetened with maple syrup and made with a base of almonds, pecans, walnuts, hemp seeds, shredded coconut, and applesauce.

20. Paleo Pumpkin Granola
To make a texture that’s nutty but almost cookie-like, this recipe has coconut flour mixed in. The coconut flour binds with the canned pumpkin, maple syrup, and other wet ingredients to make a deliciously flavorful crust on those nuts that you won’t be able to resist.

21. Grain Free Tahini Granola With Apricots and Cherries
Adding nut butter to granola isn’t terribly unusual, but I love the unique addition of tahini in this recipe. The tahini adds a creaminess that doesn’t overwhelm the flavors of cinnamon, vanilla, apricots, and cherries on a base of walnuts, coconut, and seeds. 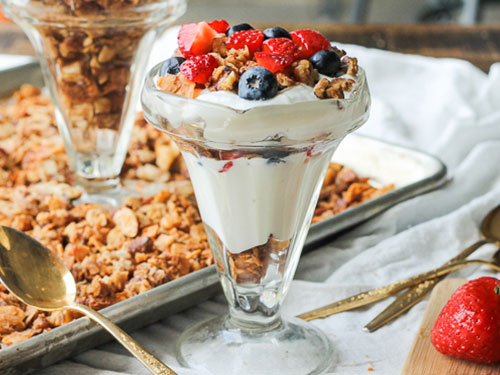 22. Paleo Protein Granola
In this recipe, almond butter and egg whites add to the already-protein-rich base of pecans, walnuts, and sliced almonds. Banana chips add a sweet crunch that’s complemented by maple syrup, vanilla extract, and ground cinnamon. Coconut oil is your healthy fat in this recipe.

23. Paleo Crumble
This recipe isn’t exactly a granola, but you can use it as one and it’s super crumbly and tasty, almost like healthy cookies served with almond milk. Make it with almond flour, coconut flour, sea salt, cinnamon, almonds, raw walnuts, coconut oil, and maple syrup.

24. Sweet Twist Paleo Granola
This granola is sweetened entirely with dates, and has a delicious and unusual flavor from freshly ground black pepper, lemon juice, and allspice. I also find that adding egg whites to my granola, like in this recipe, helps with having nice big crunchy clusters.

25. Grain Free Almond Granola
While I love vanilla extract in granola or really anything baked, I also think almond extract lends a fabulous flavor to granola. This recipe, almond extract plus the base of cashews, maple syrup, coconut, and more creates a flavor that’s reminiscent of amaretto. 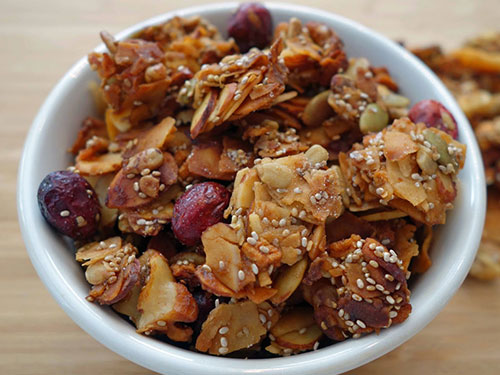 26. Coconutty Cranberry-Apple Granola
I also have my granola with fresh fruit anyway, but I have to admit that one of my favorite things to add directly to the recipe is freeze-dried fruit. I love the crunchy texture and the strong burst of vibrant flavors, and I think it works especially well in this recipe.

27. Paleo Strawberry Granola
This recipe is so juicy with strawberries, because they’re the main ingredient! If you want granola for breakfast but you didn’t have time to make a big batch over the weekend, this “instant” granola is just strawberries, dark chocolate, chopped nuts, and lemon juice.

28. Spiced Apple Granola Clusters
Clustery granola is my very favorite kind, so much so that I specifically seek out recipes boasting big, crunchy clusters. This recipe does just that, with mixed seeds, dried apple, mixed nuts, coconut oil, cinnamon, date syrup, and flaxseed. The date syrup is what makes the clusters stick together.

29. Cardamom, Almond, and Fig Granola
Sweetener with raw local honey, this granola has a slightly exotic flavor from the cardamom, which is the perfect spice to include with the chopped dried figs. A half teaspoon of fine sea salt really works to bring out the flavors and help them blend together. 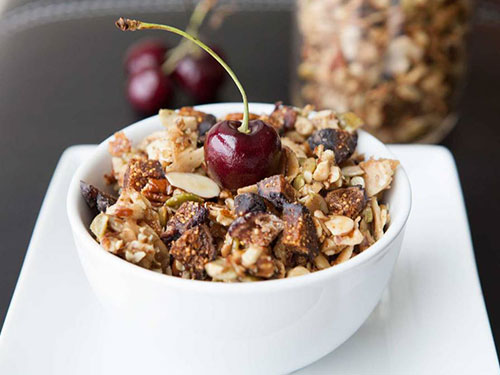 30. Hippie Fig Granola
I love figs in granola. They have such a sweet and chewy flavor that’s almost like dates, but more fruity. This recipe uses lots of figs, plus slivered almonds, walnuts, pecans, pepitas, coconut flakes, and sunflower seeds. You may also be able to reduce the amount of maple syrup.

31. Cacao and Hazelnut Grain-Free Granola
This granola has a chocolate-hazelnut flavor, and is so delicious you won’t even feel guilty for eating chocolate for breakfast. And with only a quarter cup of honey or maple syrup as the sweetener, you won’t need to! It’s low and sugar and high in flavor.

32. Paleo Sugar Free Date Sweetened Granola
This granola is made from pecans, sunflower seeds, almonds, shredded coconut, walnuts, hazelnuts, and cashews mixed with a paste of coconut oil, almond, butter, medjool date syrup, cinnamon, and vanilla. I could basically eat that with a spoon, but I’ll put it in the granola instead.

33. Detox Friendly Sugat Free Granola
Perfect for your next sugar-free detox, this granola is sweetened only with bananas and flavored with cinnamon and vanilla. The base is slivered almonds, walnuts, flax, and lots of other nuts and seeds, so you’re getting a breakfast that’s rich in vitamins, minerals, and macronutrients. 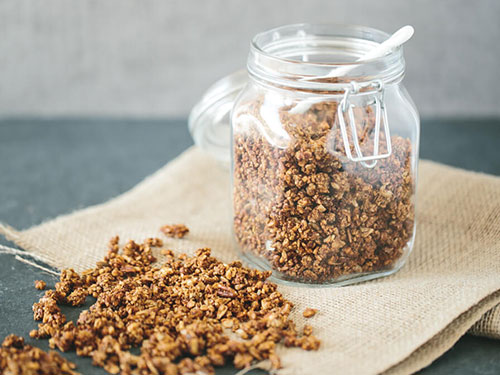 34. Chai Spiced Granola
Chai is my very favorite drink, so I’m pretty excited to enjoy it in granola form. This recipe is made with almonds, pecans, sunflower seeds, cashews, and more. The flavors of cinnamon, ginger, cardamom, and allspice are rich and enhanced with honey and blackstrap molasses. 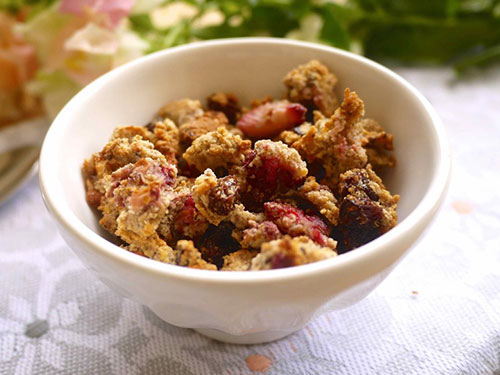 38. Strawberry Almond Granola
This granola has a rich strawberry flavor with lots of vanilla and cinnamon, and only a modest amount of maple syrup as the sweetener. The texture is fabulous because of the batter/dough and the method of spreading it out on the baking sheet. Check it out!

39. Strawberry Coconut Granola
The freeze dried strawberries (added after baking) totally make this recipe. Vanilla and maple syrup mix with the berry flavors to make the most wonderful breakfast with a base of raw pumpkin seeds, sunflower seeds, coconut flakes, and flax seeds. nut-free! You can even add coconut extract if you want.

(Make this next: Homemade Sweet and Salty Paleo Granola Recipe)