If you’ve been doing the Paleo diet and aren’t getting the results you want, it can be very frustrating. You stick to it religiously but still the scale doesn’t move. Don’t give up, it only takes a bit of troubleshooting to find out where the problem is, and the following reasons can get you. 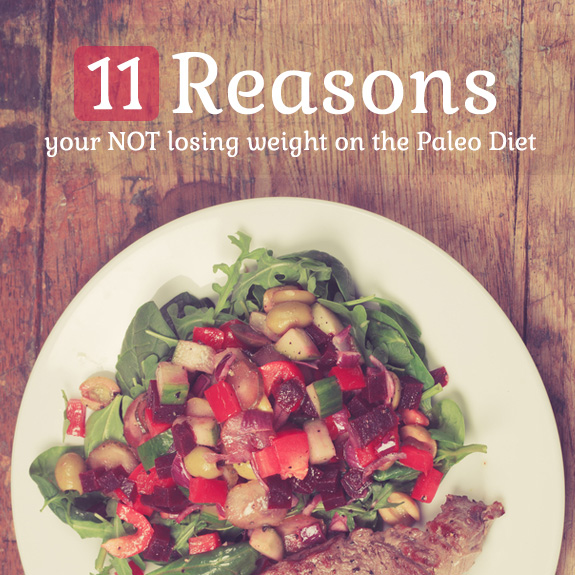 Don’t come anywhere close to starving yourself when you’re on Paleo. This is a diet that has you following the classic three meals a day, and eating meals that fill you up and keep you full till your next meal. Since you’re not limited on how much you can eat, you shouldn’t be worrying that you’ll be super hungry before the next meal time.

How to Fix It: Get your fill at each meal. This sends powerful messages to your brain that food is plentiful, that you’re not on a “diet”, and you can relax because you know where you’re next meal is coming from. It also provides more nourishment to your body in the form of more vitamins, more minerals, more protein, and more fiber.

2. You’re Not Being Patient Enough

With so many gimmicky diets on the market promising weight loss in 3 days, 7 days, 10 days, 30 days, etc. it’s no wonder that we expect to see quick results. But if you’re overweight you likely didn’t get that way in a short period of time, and the process of taking it off involves slow and steady progress.

Checking the scale too often can be great when you’re losing weight almost daily, or it can demotivate you if it doesn’t budge even after sustained effort. Some diets out there advocate weekly weigh-ins, but when you consider that Paleo man never stepped on a scale you start to see how the Paleo diet doesn’t conform to modern day concepts of what it means to lose weight.

How to Fix It: Give yourself at least 30 days before you start looking for measurable results. Instead, focus on how you’re feeling, your energy levels, and how your clothes are fitting. Often you’ll notice these changes before the number on the scale starts moving.

3. You’re Not Measuring the Right Weight

It could be that you’re losing fat and putting on lean muscle in just about equal parts. This can be rather frustrating when scale watching because it will appear that you’re not making any progress. Your body is going to go through the process of restructuring itself, especially if you’re working out while doing Paleo.

If you have a lot of fat and underdeveloped muscles your body composition is such that you have a high Body Fat Percentage. As you start to get more protein your body is able to build muscle more easily. With a reduction in foods that are unhealthy, combined with healthy vegetables, fruit, and healthy fat, you should be able to lose fat effortlessly.

How to Fix It: Get a scale that also measures your Body Fat Percentage, and check in on that number on a monthly basis. It’s a much better gauge of how you’re doing, and will give you a more accurate idea of whether you’re losing the right weight or not.

4. You Need to Add Exercise to the Formula

Eating the Paleo way provides you with plenty of real energy thanks to the vegetables, fruits, and meat you’re eating, and by avoiding all of the foods that can leave you feeling lethargic. Put that energy to good use by getting more active than you were pre-Paleo.

If your weight loss hasn’t been happening as fast as you thought it would on Paleo, exercise could represent the tipping point for you. For best results get your exercise outside so you can get some sunshine, fresh air, and commune with nature.

How to Fix It: Some Paleo enthusiasts like to add caveman style workouts to their eating, lifting heavy weights, and doing sprints in intervals. You can also go gatherer-style, and take a long walk each day. No matter which activity you choose, when you combine more activity with proper eating weight loss is the byproduct if you’re overweight.

There are guidelines on the Paleo diet that can be pretty hard for newcomers to stick to. Getting rid of processed food including junk food, fast food, sodas, grains, and dairy can be too much to just give up cold turkey. This can become a major sticking point and a big hurdle for Paleo dieters.

Depending on your personality type you may be better served by phasing out the things you’re not supposed to be having on Paleo rather than trying to stop everything all at once.

How to Fix It: Don’t beat yourself up for not following the Paleo diet “perfectly” from day one. Instead, work on gradually cutting out things that you’re not supposed to be having. Trying to be perfect and then getting down on yourself because you slipped or cheated just makes you feel bad. Realize that it’s a process of swapping old habits with new healthier ones, and give yourself credit for making regular progress.

Our modern world makes it pretty tough to mimic the Paleolithic lifestyle. One of the hardest things to emulate is the way Paleo man would have slept. Total darkness would have been easy to achieve back then with no light pollution, and they would have slept in line with the circadian rhytm, switching over to resting mode not too long after the sun went down and waking up with birdsong.

All too often we burn the candle at both ends, forcing ourselves to stay up late only to be forced awake by an alarm clock long before we’ve reached the 8 hour mark.

How to Fix It: Be sure you’re getting a full 8 hours of restful sleep in a bedroom that has total darkness. Try your best to sleep from the hours of 10pm to 6am to get back into the circadian rhythm.

This may sound counterintutive, especially if you tuned in to all of the low-fat and no-fat diets of old. Healthy fats won’t make you fat, and instead help the body burn fat. They play an important role on the Paleo diet, adding plenty of flavor and helping to keep you satiated longer.

Healthy fats on the Paleo diet include coconut oil, avocados, olive oil, almonds, sunflower seeds, and more. These are very easy to incorporate into your diet because you can use the oils in your cooking, and eat avocados, nuts and seeds as a between meal snack.

How to Fix It: Be sure to add coconut oil, nuts, and seeds rich in healthy fat to your daily eating routine. You’ll not only feel full longer, but you’ll be helping to provide what the body needs in order to burn off excess fat.

In the last 30 years there have been so many diet plans, weight loss fads, and programs released that it’s easy to pigeonhole the Paleo way of eating into the confines of a “diet”.

If diet is a four letter word to you, it’s time to distance the Paleo diet from the other diets that have reached such enormous heights of popularity. The Paleo diet isn’t something you have to force yourself to do, or that you won’t want to do. If you’re doing it right it should be something that you want to do, and a way of life you look forward to living each day. You’re not counting anything or limiting yourself, and the main goal is to feel good, eat foods the body needs, and live the human experience to the fullest.

How to Fix It: Think of the Paleo diet as more of a lifestyle change and philosophy. The Paleo food list is full of foods that nature provides and humans used to eat plenty of. The list of foods that are off limits are foods that man invented and that aren’t natural to the body.

The low-carb and no-carb diet craze still has a pretty strong following, and some have even tried to categorize the Paleo diet as one of them. But this misses the point of Paleo, and counting or tracking how many carbohydrates you’re eating is not what it’s all about.

If you follow the Paleo diet correctly you’ll naturally be reducing your carbs, especially if you used to eat a lot of bread, pasta, rice, and other carb-laden foods. Paleo gives them the ax not because of their carb content, but because of what they’re made from.

How to Fix It: Relax about your carb intake and trust that when you eat Paleo meals you’re automatically getting a healthy amount of carbs, and the right kind of carbs.

Some of the most popular diet programs on the planet still have you counting calories and making sure that you clock in at a certain caloric number each day. If you’ve been applying this approach to Paleo you’ve likely been shortchanging yourself and are not getting enough nutrients to properly fuel fat loss.

Paleo isn’t about limiting yourself in any way, and when you’re focusing so much on lack it’s only natural that you’re going to be subjected to hunger pangs and other side effects of restrictive dieting. Don’t hold yourself to daily or per-meal calorie counts. Cook Paleo meals that look delicious to you, and eat them until you’re not hungry any more. You don’t have to stuff yourself at each meal, but you want to feel satiated. When you count calories and limit your food intake according to calories you will rarely feel satisfied throughout the day and will have food on your mind all the time.

How to Fix It: Instead of watching your calorie count like a hawk, focus on eating until you feel satisfied. One meal might take you 500 calories to feel good, and another might take 1000 calories. It’s all about listening to your body and eating to feel good rather than viewing food as something you need to limit or analyze.

11. You’ve Got the Wrong Mindset

Success with weight loss starts in the mind, and if you’re approaching this with the wrong mindset you are going to have limited results. If you’ve tried to lose weight on other diets in the past, and went into the Paleo diet thinking that it won’t work, the defeatest mentality will only serve to limit your progress.

Your own body image is also something you’ll want to work on. Start picturing yourself as having the physique of a hunting caveman or a gathering cavewoman. This is where you’re headed when you follow the Paleo diet, but you can’t get there until you start holding the right image of yourself in your mind.

How to Fix It: Try to unlearn everything you think you know about what it takes to lose weight. All of the misinformation you’ve taken in over the years is working against you, and inhibiting your weight loss progress. Get a healthy case of amnesia and forget about all of the times you’ve tried to lose weight in the past. Treat this like your first attempt, and try to have a positive mentality about how things are going to go.