We live in a society full of rules. They make things easier to follow and add structure to things that might otherwise be harder to wrap your head around. With the Paleo diet everyone wants to know what can and can’t do, and what rules there are to follow in order to consider yourself a successful Paleo-ite. Here are some basic guidelines to help you stay on the Paleo path. Remember it’s OK to veer off it once in a while, as it’s not so easy to replicate the Stone Age in the 21st century. 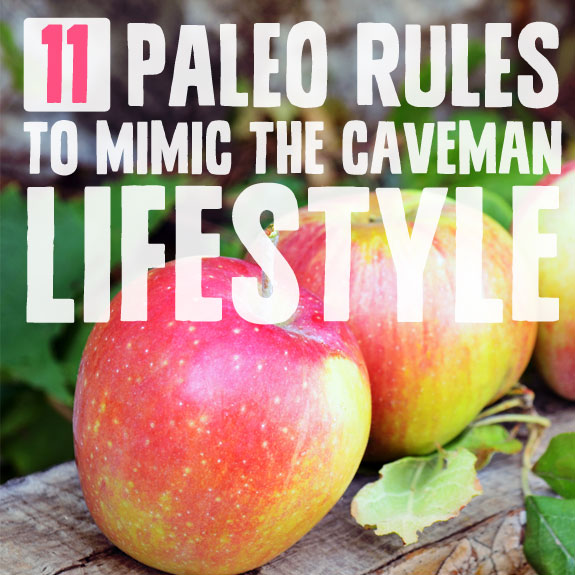 1. Don’t Count Stuff
Today’s modern diets always have you counting up all sorts of things, from calories to carbs, and have you on the scale checking to see how much you’ve lost. But prehistoric man wouldn’t have spent this much attention on inconsequential things, they would have eaten when they were hungry, and when there was food available, and gone about their day. Try to adopt the same mentality. As long as you’re eating Paleo approved foods you needn’t worry about how much of what they contain, as you’ll be getting the essentials in a very natural form.

2. Eat Animals
It’s well-documented that Paleolithic man ate what they came upon, whether it be an animal smaller or bigger than them. Anything they could bring down was a dinner option, so the same holds true for us today. Luckily for us it’s a lot easier to get meat sources, and it generally only requires a trip to the grocery store or butcher. In order to try to turn back the clock as much as possible always opt for meats that are organic and grass-fed. This is the best we can do in our modern world to replicate how they had it back in the Paleo age. Of course wild game is always a good option, but not always the most convenient.

3. Eat Vegetables
Contrary to what many believe the Paleo diet is not all about meat. It’s roughly equal parts meats to vegetables with some fruit thrown in for good measure. It tries to re-create what it was like to be a hunter and gatherer, and it is believed that the men would go out and hunt while the women in a tribe would gather vegetables, fruits, and nuts from the nearby surroundings. That’s why it’s a good idea to vary the vegetables you’re getting, and not always have the same thing all the time. The body thrives on a diverse variety of foods.

4. Eat Fat
This is a hard one for many to wrap their heads around because of the fat-free diet craze of the 80s and 90s. But healthy fats are healthy for you, and actually help the body rid itself of fat deposits. When you eat according to the Paleo methodology you are going to be eating your fair share of healthy fats in the form of things like coconut oil, olive oil, and avocados. It’s important to make a conscious effort to get more of those fats into your body on a daily basis, and avoid the types of fat that are harmful to the body, like trans fats from fast food and junk food, and saturated fats from fatty cuts of meat. Keep your meat lean, and get healthy fat from as many different sources as possible.

5. Don’t Eat Sugar
The kind of sugar used in food products today is not something that Paleo man would have had access to. If anything they might have come upon some sugar cane, and even then they probably wouldn’t have consumed too much of it in any one sitting. On Paleo you won’t want to eat any form of sugar, and it comes in so many forms such as sucrose, fructose, High Fructose Corn Syrup, and artificial sweeteners of all kinds. You can still get your sweet fix with things like raw honey, stevia, some fruits, and other sources, but avoid refined sugar of all kinds, and any product that contains them.

6. Don’t Eat Dairy
Cutting out dairy can be hard, but when you consider that it’s a relatively new food source, it’s not that difficult to give it the boot. The dairy industry does its best to promote its products, and most of us are familiar with Got milk? ads, and many believe that milk “does a body good”. But when you consider that mankind thrived for several thousands of years on human breast milk alone it’s easy to see that it’s not natural for us to drink another species milk, as we’re the only mammal that does. We’re also the only mammal that drinks milk after infancy. While it’s true that many have adapted to having milk in the diet, it’s also true that many remain lactose intolerant, at least to some degree.

7. Don’t Eat Grains
Grains are so ubiquitous in our society that this one can pose a problem for many Paleo followers. The US government is also contributing to the problem by putting grains as one of the things you’re supposed to get the most of each day according to their food guide pyramid. Once you give up the grains you’ll likely find that weight loss is soon to follow, as well as increased feelings of well-being. This alone is enough for most to want to stick to the Paleo way of eating, but at the same time it can be one of the hardest steps to take because it seems like grains are in everything.

8. Move
One drawback to our modern lifestyle is that we don’t get enough motion in a typical day. We wake up, drive to work, sit at work, drive home, sit at home, and go back to bed. But back in the time of the caveman the day was full of motion in the form of walking, jogging, and running if need be. You don’t have to exercise for long periods of time, in fact many Paleo followers will opt for high intensity interval training to mimic the way Stone Age many would have sprinted for short bursts, and then rested, either while hunting or avoiding becoming prey.

You can also take the approach of another hunting method, the one where you simply tire the prey out until they keel over from exhaustion. This would involve lower intensity training over a longer duration. Whatever you decide on, make it a point to get daily activity, as this is something that was definitely a part of Paleo man’s lifestyle, the one that gave them their amazing physique.

9. Sleep
Prehistoric man would have been more in tune with the circadian rhythm, and if you’ve gotten off the natural cycle of things, it’s always nice to get back on it. This involves settling down after the sun goes down, doing activities that are relaxing and pleasing, and then getting to bed early. This insures that you’ll get deep, nourishing sleep and you’ll feel awake and alert right before the sun rises in the morning. For many this can be a form of sleep therapy, especially if they’ve gotten into the habit of staying up late and waking up late, or even worse, staying up late and waking up early.

10. Get Outdoors
Modern man spends much more time indoors than our ancestors did, and it’s not surprising when you consider that our homes and workplaces are much more comfortable and ubiquitous than early abodes. It’s still important to get outside, get some fresh air, get some sunshine, and touch base with Mother Nature. It will make you feel good, especially when you consider that you need exposure to sunlight in order to produce your own supply of Vitamin D, often referred to as the happy vitamin. If you can combine being outdoors with getting more activity in your day, so much the better, but something as simple as taking a daily walk can be all that you need.

11. There Are No Rules
Remember that these rules are not really rules because the Paleo Diet doesn’t have any hard and fast rules, and there is still a lot of debate as to what the diet even is. There are only a few sources referred to as Paleo gurus, and even they are just giving their best guess as to what it was like to live so long ago, and applying their knowledge of nutrition and the body to what is known of early man.