By now you’re probably realized that potatoes aren’t on the menu when on Paleo, but the good news is that mashed cauliflower can get you most of the way to mashed potatoes. In fact, Paleo culinary artists have been doing their best to come up with the perfect stand-in for a mound of mashed taters, and have done a pretty good job of getting it right with a big head of cabbage and some supplemental ingredients. Here we’ve rounded up the best ones we can find for the mashed potato addicts out there. 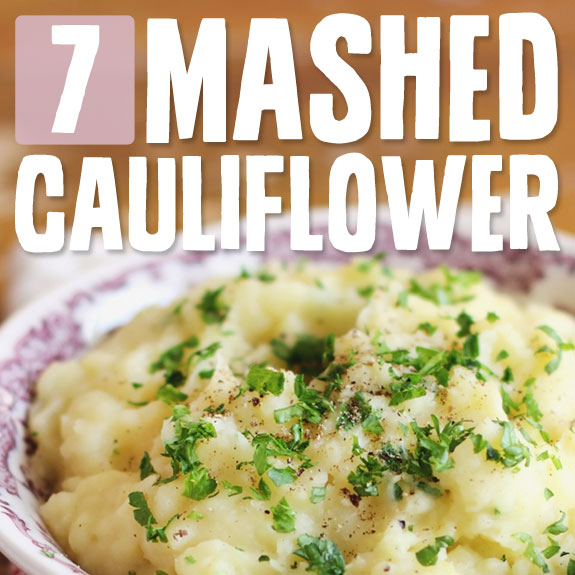 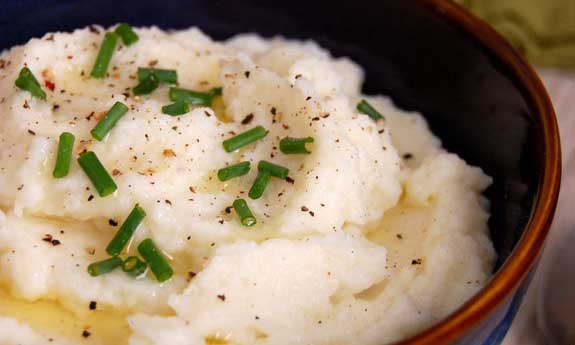 1. Easy Mashed Cauliflower with Garlic
We like things easy, especially when it comes to side dishes, so Rebecca has made sure to cut out all of the complicated steps and boiled this down to only its essential parts. Can’t make it without cauliflower, so that’s included. Almond milk is used to give them a creaminess and make it so it’s not just eating mashed up cauliflower. A bunch of garlic is used to give them a strong taste, and when combined with the ghee this is going to be a buttery, garlicky offering. Salt and pepper to taste and you’re ready to serve it up!

2. Mashed Cauliflower with Roasted Garlic & Chives
What makes this mashed cauliflower recipe so delicious is that you roast the garlic before adding them to the mix. It uses an entire head of garlic, so you definitely will taste it, and there is plenty of olive oil and the healthy fat it contains. They are also using ghee which gives this a nice buttery flavor. A little bit of chives, some sea salt, and some ground black pepper and these are good to go. Many of the ingredients that go into these also go into a batch of mashed potatoes, so it does a good job of recreating them.

3. Spud-free Cottage Pie
Cottage pie or shepherd’s pie traditionally uses mashed potatoes as a big part of what makes it up. If you want to enjoy these recipes while doing Paleo, you’ll need to swap out those mashed potatoes with mashed cauliflower, and this is a good recipe to start with. It not only gives you a good base of beef and vegetables, it caps the top off with a thick layer of mashed cauliflower. If you’ve never made Cottage Pie before, this is a pretty easy recipe to follow, and you don’t have to worry if it’s breaking any Paleo rules or not, because it isn’t. 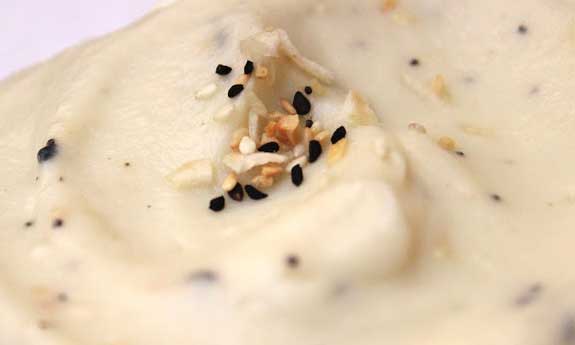 4. Everything Mashed Cauliflower
This recipe uses a special shortcut to produce mashed cauliflower that has “everything” in it. The everything they’re referring to is the mix of toppings that goes onto an everything bagel. If you’re a fan of the bagel, you’re likely missing them while on Paleo, and this is one way to remind yourself of what they taste like without going off track. The spice mix she’s found is actually a mix of all the toppings that go on an everything bagel. You can obviously make the mix up yourself if you’re unable to find it locally. The recipe creator even states that this is a good way to get the taste of a bagel without acting recklessly.

5. Slim Palate Mashed Cauliflower
At this point it’s turning into a showdown between different Paleo chefs to see who can make the best mashed cauliflower. This offering has just four ingredients that make up the base, but then gives you four different flavor options to choose from, so you can decide if you just want them plain, or curried, cheesy, herbed, or smoky depending on what you’re serving them up with. It’s interesting to see that just a lot of cauliflower, some butter, garlic, and salt and pepper is all you need to make a basic batch of mashed cauliflower.

6. Creamy Mashed Cauliflower
If you like your mashed potatoes creamy, this is the mashed cauliflower recipe for you. You’ll have to be the kind of Paleo follower that allows a bit of cheese, but you get to pick the cheese you use so you can choose something that agrees with you. You’ll also want to use almond milk when it comes to the milk being used. They have to use something with a creamy texture to make the creaminess, right? The end result is a buttery, creamy, cheesy blend of cauliflower that makes it seem like you’re just having an ordinary side dish and aren’t going without anything. 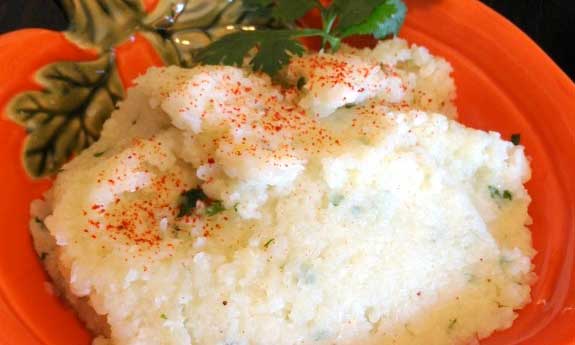 Mashed Garlic Cauliflower
Here’s our final mashed cauliflower recipe, which can serve as a go-to whenever you need a boost of garlic in your life. It uses plenty of cauliflower of course, but also a respectable amount of garlic, almond milk to smooth everything out, and parsley and paprika for additional flavoring. This means these won’t just look like a pile of potatoes on your plate, but they’ll taste like them too when you bite into them. They make the perfect side dish to just about any meat dish, beef and chicken being the two most popular choices, but lamb and pork also working quite nicely.