Paleo isn’t about depriving yourself and getting rid of foods because they contain ingredients you can’t have. It’s about finding creative ways to use the foods that are allowed to re-create the foods you enjoy that aren’t allowed. Traditional lasagna gets the kibosh because of the thick noodles it contains that are made from wheat-based flour. The following recipes feature tasty lasagna options that don’t use these types of noodles, and don’t contain any grains at all. We’ve even featured a dessert lasagna to show you just how versatile Paleo can be. 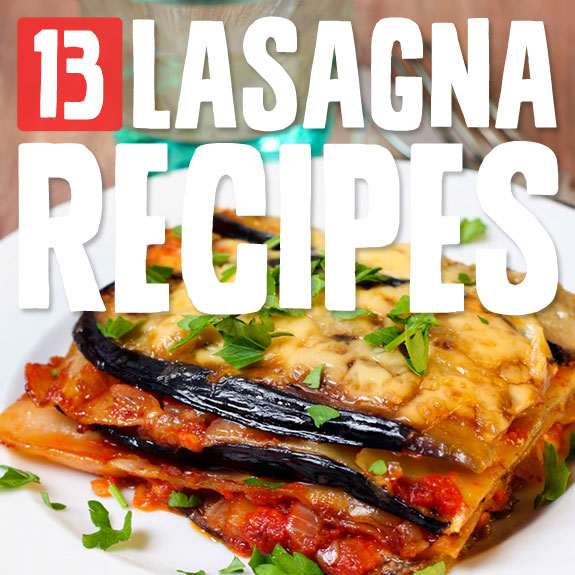 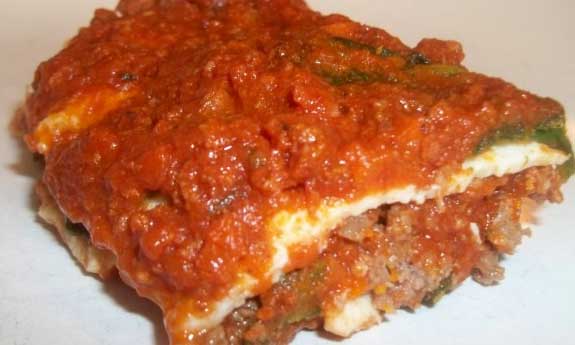 1. Paleo Lasagna
Here is a recipe that attempts to deliver traditional lasagna taste and texture without violating any of the Paleo principles. They’ve gone through the trouble of producing it two ways, one that’s Paleo and one that’s Primal. You’ll want to follow the Paleo recipe, which does away with the cheese, which is something that’s allowed on Primal but not strictly Paleo. They’ve done away with the noodles by making crepes out of egg whites. This gives the texture of noodles without using grains, so you can enjoy this completely without feeling like a slob after you eat it.

2. Zucchini Lasagna with Cauliflower Ricotta
In this lasagna creation they are using zucchini to replace the noodles, and they’re somehow turning cauliflower into ricotta to replace the dairy. Cauliflower has to be one of the most versatile vegetables, being used to replace rice, potatoes, pizza crust, and now ricotta cheese. Taking out the gluten and dairy from lasagna is a big step toward making it healthy. The ingredients they’ve used to replace the gluten and dairy items are all wholesome, and totally in line with Paleo eating. Try this lasagna and you surely won’t miss the old way of making it.

3. Butternut Squash Lasagna with Cashew Cheese
Butternut Squash makes a great stand-in for noodles, and they’ve even managed to turn cashews into a nice cheese replacement so you’re getting the taste and textures you’d expect, but without having to sacrifice your diet in any way. With Paleo you can feel free to load up your lasagna with plenty of meat, and here they’re using grass-fed ground beef, but they also point out that you could use turkey as well. They’ve made their sauce somewhat from scratch, including a rundown of seasonings that will have this tasting great. 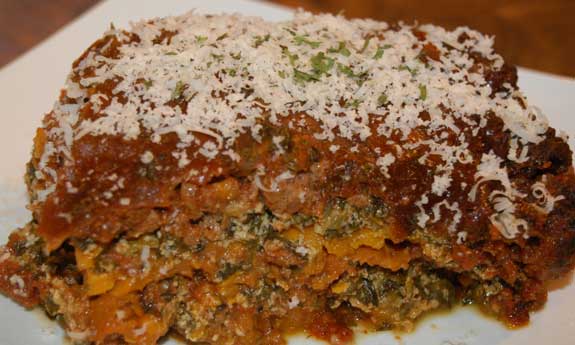 4. Crock Pot Sweet Potato Lasagna
With all of the healthy vegetables being used in this lasagna, you’ll be getting plenty of nutrients without feeling like you’re eating diet food. Sweet potatoes are used in place of noodles, and there’s also a wonderful spinach mix that will supply plenty of phytonutrients, iron, fiber, and protein to the equation. The best part is this is made in the Crock Pot, so you don’t have to babysit it or worry that it won’t come out fully cooked. This recipe does call for cheese, so you can sub in vegan cheese to keep it fully Paleo, or omit it entirely.

5. Spicy Italian Sausage Lasagna
This is a lasagna that will wake up your taste buds thanks to the inclusion of Italian sausage, which has been taken up a notch with spices. Take their recommendation to use zucchini strips instead of lasagna noodles, and leave out the cheese unless you’ve found that you can process some cheese without a problem. Many Paleo followers will allow themselves cheese like Parmesan, which are hard and don’t contain as much lactose as soft cheeses. This is a feeling out process that involves some trial and error, so it’s a good idea to give cheese the boot at first and then see if you experience any digestive issues when having some now and then.

6. Lasagna-Stuffed Portabellas
These portabella caps have literally been stuffed to the brim with lasagna goodness. The mushrooms are serving as the noodles, and they’ve made this meat free. You could easily add some grass-fed ground beef to it if you want to really stuff them. They’ve also included ricotta and mozzarella which Paleo purists will want to leave out, but those that are OK with a little cheese now and then will want to leave in. There are no hard and fast rules when it comes to eating Paleo, it’s a matter of finding your own happy place, while at the same time keeping in mind what was commonly eaten 10,000 years ago. 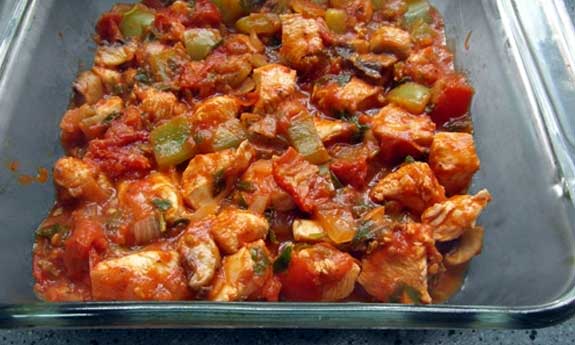 7. No-Pasta Chicken Lasagna
This lasagna uses chicken instead of beef, and instead of layers of noodles they are using layers of collard greens. They’re using these instead of noodles because noodles are not agreeable on the digestive system. That’s why you may have noticed that you didn’t feel so great after eating a big slab of traditional lasagna. It may have tasted good while you were eating it, but the discomfort later made it not worth it in hindsight. Now you can enjoy those flavors, or at least similar flavors, without feeling remorse when you’re finished.

8. Roasted Red Pepper Lasagna
This lasagna uses roasted red peppers as its medium, and does a great job of cutting out the ingredients from regular lasagna that you can’t have, and subbing in Paleo winners. The great part about this is you can speed the process along by using a rotisserie chicken you find at the grocery store already cooked up. Just be sure to get the organic or Amish ones to avoid the antibiotics that are in conventional chickens. They are using feta and goat cheese instead of cheese made from cow’s milk, which may be a cheese that you can enjoy because it is more easily digested by most.

9. Latin Lasagna with Beef and Plantains
Here’s lasagna with a Latin flavor that will keep you coming back to it again and again. You probably haven’t seen a lasagna that uses plantains in it, and this is sure to give your palate something to think about. The plantains are used in place of noodles, and give the right texture of a noodle done al dente. They are using both beef and pork, so the depth of flavor will definitely be there, and you’ll wonder how you ever went this long without combining these two meats in your lasagna. 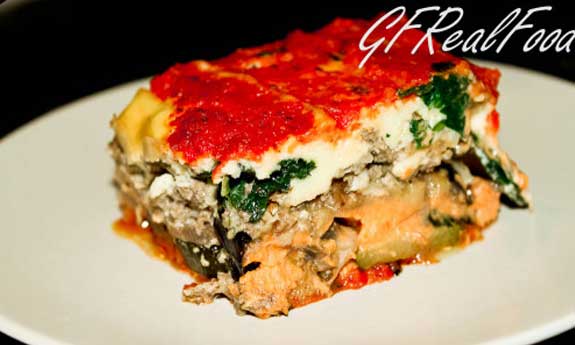 10. 9 Layer Lasagna
Lasagna with just 8 layers won’t cut it any more after you’ve tried this 9 layer lasagna out. There’s a layer of mushrooms, a layer of beef, a layer of sauce, a layer of spinach, and then you repeat the process until you get to the 9th floor. It’s an awesome creation to behold, and is great for entertaining guests. They’ll never know you are serving them anything that is part of a diet, unless you choose to tell them. This is free of gluten, free of dairy, but not free of flavor. It’s a fantastic example of just how much you can have while being on Paleo.

11. No Noodles Zucchini & Eggplant Lasagna
This lasagna uses the combination of zucchini and eggplant in a way that will make you forget that lasagna is supposed to have noodles in it. They’ve used ricotta in this, so you’ll have to determine if you want to use it or not. Paleo purists would say no to any cheese, while more lax followers will take it on a case by case basis, and just use organic or grass-fed cheese to make it more pure. They walk you through all the steps of layering this correctly so it comes out looking and tasting awesome.

12. Lamb Lasagna
Have you ever tried lamb in your lasagna? If you haven’t you’re in for a real treat. Its flavor lends a certain savoriness that you don’t typically find in ordinary lasagna. It’s using zucchini and eggplant to accompany the lamb and replace the noodles. The lamb is ground up, so its texture will be just like that of ground beef, but will give the dish the flavor of lamb instead. They’ve taken care to use spices and seasonings that complement lamb, like all spice, and have even added some red wine to help accentuate the taste.

13. Chocolate Lasagna
To finish off this list we thought we’d show you a great way to make a fantastic chocolatey dessert that gets its inspiration from lasagna. It features layers of yumminess that are like an Oreo cookie, but without going against the Paleo way of eating. This is a fantastic dessert to serve guests, and can also be used as part of a lasagna themed night. The nice part about eating Paleo lasagna is that you’ll have room for dessert. The great thing about Paleo desserts is that you don’t have to feel guilty about eating them.