Casseroles usually equal comfort food in my book, and this sausage and kale pasta casserole definitely fits the bill. As an added bonus it is quite simple to make. The spaghetti squash is baked first, and then stirred into the rest of the ingredients on the stove before everything finishes baking together in the oven. The savory and creamy dish tastes almost too good to be healthy for you. 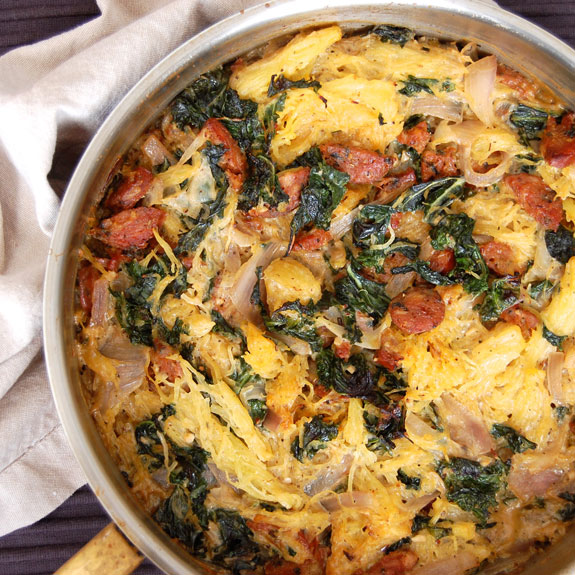 The coconut milk lends a silky texture to the spaghetti squash casserole. There are other casserole recipes that turn out creamier, but this version is more similar to a pasta bake. I have previously provided a step-by-step photo tutorial on preparing spaghetti squash in another post, so feel free to refer to that for detailed directions. While the spaghetti squash is baking, you can start cooking the sausage and kale on the stove.

I have a short life lesson for you today. Sometimes, I order groceries to be delivered to our apartment if I have a lot of recipes to make that week. Last week, the one bunch of kale that I ordered was replaced with a several-gallon bag of kale. I did not even know kale could be delivered in such large quantities. Some was given away to friends, but for most of it I was able to incorporate into recipes such as this. Large handfuls of kale cook down to almost nothing once wilted. In this recipe kale works really well with spaghetti squash and coconut milk. The health benefits of kale are undeniable, so I definitely take the opportunity to work it into recipes when I can. 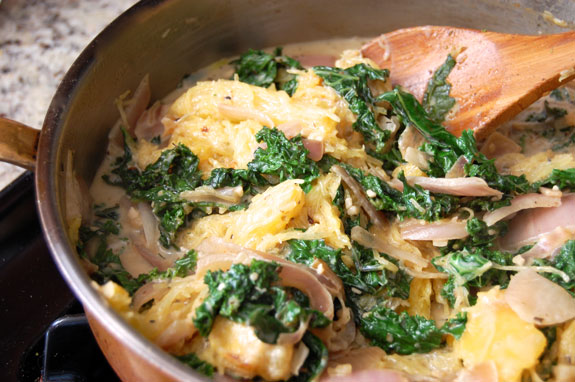 Moral of the story, make sure that when you place that online order for groceries, you uncheck the box that says “if not available, substitutions can be made.” Otherwise you might end up with more kale than you can fit in your refrigerator. But good things can come of it, such as this sausage and kale pasta casserole. 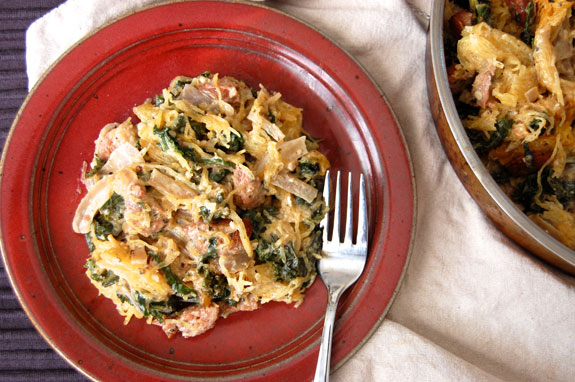