You can add jerky to your list of Paleo snacks, as it’s mostly meat, but you’ll want to make sure to make it yourself so that you can have the final say over what goes in it. With the leading jerky manufacturer using things like mechanically separated chicken, MSG, and enough sodium to bring down a wooly mammoth, you just don’t want to take a risk buying pre-packaged jerky. Not when there are simple Paleo jerky recipes available that you can use to cut down on the goof up factor and get it right every time. 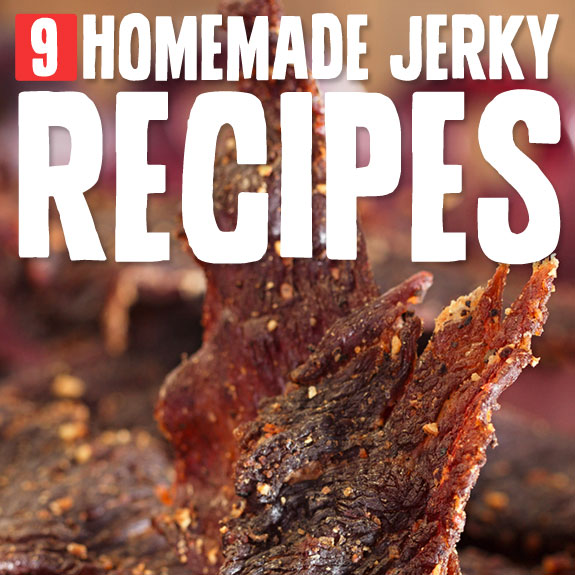 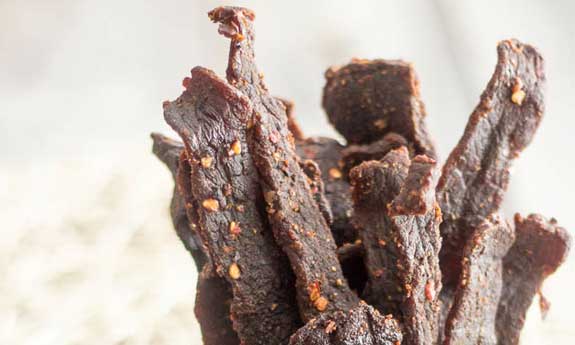 1. Hot & Spicy Homemade Beef Jerky
This beef jerky looks good enough to be sold in stores. It’s made with thin slices of grass-fed beef, a far cry from the grade of beef used in some of the most popular beef jerky out there. The marinade that is responsible for all of the flavor is made from a list of seasonings and spices that would make a gourmet chef proud. The end result is you end up with a chewy, beefy snack that can work wonders at holding you over until mealtime, or that can travel with you when you don’t have time to sit down for a proper meal.

2. Beef/Venison Jerky
What’s great about this recipe is that you can use either beef or venison, whichever you prefer. On Paleo you’ll want to introduce more game meat into your diet, and jerky is a more approachable way to do this, since it all comes out relatively the same. During hunting season you can find great deals on venison, and it’s timed perfectly with the winter months when your body will naturally crave more meat. There is some hot sauce added to the marinade, so this is going to be jerky with a bit of a kick, so adjust it to your own preference.

3. Homemade Paleo Beef Jerky
This style of beef jerky has a bit thicker cuts, so it’s something you can really take your time on and chew on it for awhile. This is the sort of recipe that will have you investing in a dehydrator so that you can keep a supply of jerky on hand at all times. It’s just such a handy snack to have because it doesn’t really go bad, but you won’t have time to find out because you’ll eat it all up well before it has a chance to. Since it’s just lean beef and an assortment of spices you know that it’s Paleo approved, and you can eat it with a clean conscience. 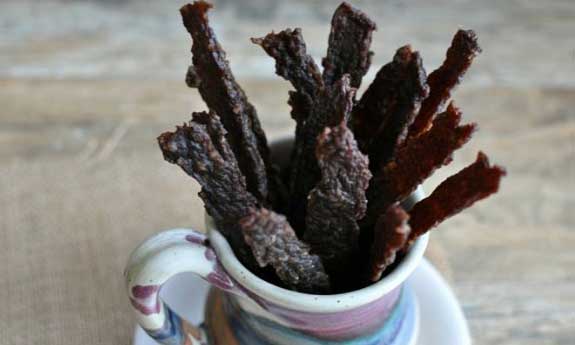 4. Cheap & Easy Beef Jerky
On Paleo we love it when things are easy, and if making beef jerky seems unapproachable for you, this is the place to start. The reason it’s so cheap and easy is because it’s using ground beef rather than steak. This makes it easier to handle, and make it so you don’t have to worry if you’re cutting thin enough strips. You should still spend a bit more and make sure that the ground beef is grass-fed, but overall your total costs should be about the same as the premium style beef jerky sold in packs. If course it does take some of your time, but it’s worth it.

5. Eggplant Jerky
When you want the taste of jerky but need a vegetable serving instead of a meat serving, this eggplant jerky has you covered. They say the eggplant takes on sort of a bacony texture, and with the use of applewood smoked salt it really does take on a bacon persona. Not that there’s anything wrong with bacon on the Paleo diet, but here we’re sticking with just vegetables, and no bacon is used in the recipe. The use of maple syrup adds some sweetness to the mix, and also adds to the bacon homage.

6. Paleo BBQ Beef Jerky
It’s awesome that they thought to add BBQ flavor to beef jerky, as it just makes total sense. The one thing that you’ll notice is that they’ve taken pains to make sure that even the barbecue sauce is Paleo friendly. They are using flank steak, cut extra thin so that this will have a nice leathery feel to it. The way you cut your steak up will greatly determine the kind of jerky you end up with. If you want thin strips like they’ve done here, you’ll need to cut it thin as they suggest. If you want heartier pieces you can make thicker cuts but it will add to the dehydration time. 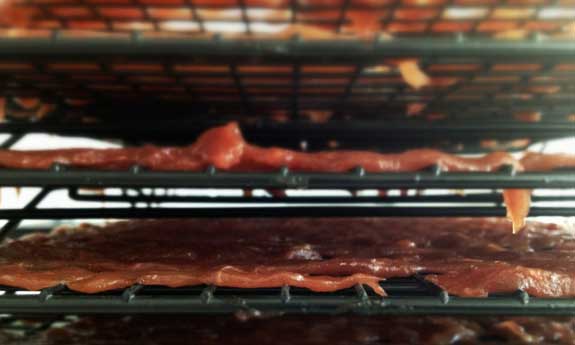 7. Beef “TeriJerky”
Get the taste of teriyaki infused into each bit of jerky with this TeriJerky recipe that combines both worlds. They include a link to the teriyaki recipe you’ll need to make Paleo friendly teriyaki sauce, and they’re recommending that you use very lean beef. The key is marinating it as long as they suggest, a full two days during which you should periodically check in to flip the meat. This is going to make sure that the marinade has time to soak in, and the beef will cook up the way you want it to. They don’t use a dehydrator for this one, so it’s a good recipe if you don’t have one.

8. Honey Garlic Ginger Beef Jerky
They are piling on the flavor in this jerky recipe, opting for a sweet flavor with a bit of punch to it thanks to the ginger. They let it marinate overnight which helps with the overall flavor once it’s dehydrated. A dehydrator is worth getting if you plan on making jerky on a regular basis while doing Paleo. The results speak for themselves and it really takes the guesswork and babysitting out of the equation. Considering the price of high-quality pre-made beef jerky a dehydrator can pay for itself in the first year if you use it enough.

9. Smoky Beef Jerky
If you love the smoky taste in your jerky, this is the recipe for you. To get that smoky flavor they are using liquid smoke. You’ll want to make sure that the brand of liquid smoke you go with only contains smoke, as cheaper brands will add unnecessary ingredients to their liquid smoke to cut costs. You can tell they are keeping an eye on the quality of the ingredients in this recipe because each one is a specialty and in keeping with the Paleo philosophy of eating.