Sunflower oil was first marketed in England in 1716, it then became popular in Russia as it grew easily. In 1830 the consumption of Sunflower oil rose when most foods made with oil were restricted during lent by the Orthodox Church. For this reason it became favored as it was not on the restricted list. 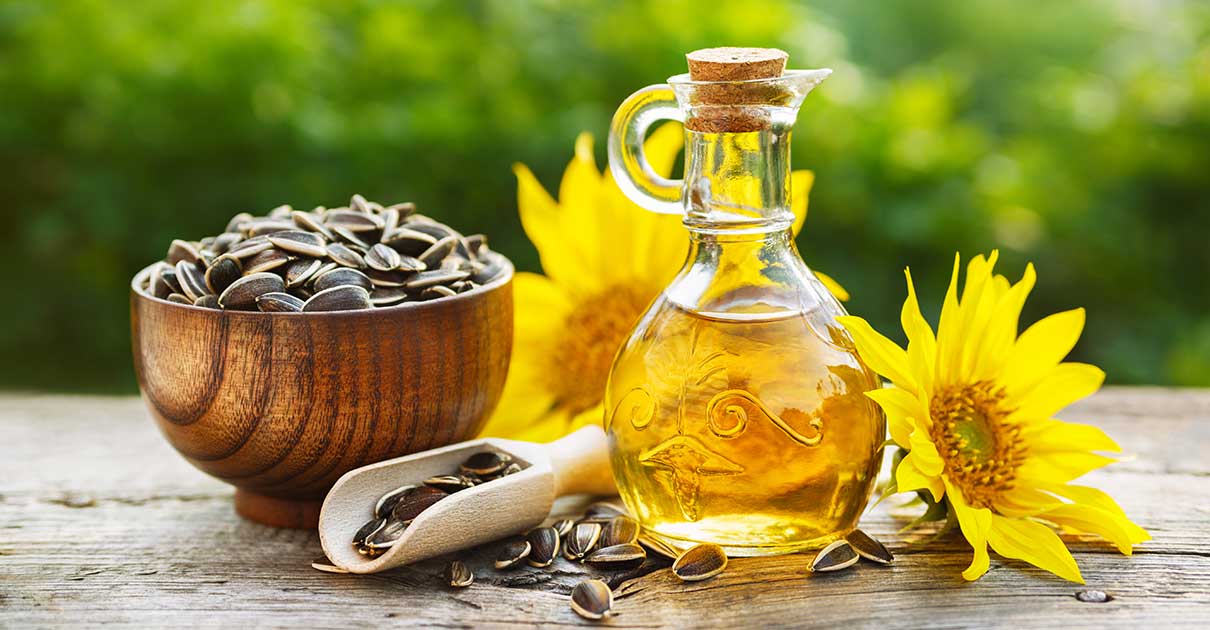 Although Sunflowers were documented as first being grown in the America’s, it only became popular in the United States of America (USA) after the American consulate in St Petersburg repatriated the sunflower plant as an oil crop. The crop was mainly used the feed poultry at this time (1).

The oil became more popular for human consumption in the 1930’s during the Spanish civil war and then World war 2 as the world had a shortage of olive oil.

Sunflower oil, as the name suggests, is made from the seeds of sunflowers. When it comes to seed oils and the Paleo diet, seed oils are discouraged as they are not Paleo friendly.

But we can eat the sunflower seeds themselves on Paleo? Yes. This may seem completely confusing, but read on…

Why Sunflower Oil is NOT Paleo

The Extraction Process
If you could see the way that sunflower oil was extracted from the seeds we could end the article right now. It is basically an incredibly harsh process that involves many different chemicals and extreme heat.For instance a solvent called hexane is used to extract oil from the sunflower seed which is highly poisonous. Last in the process is the bleaching of the oil to ensure that the oil has that pretty yellow color. This was definitely not available to us in the Paleolithic era.

Extremely High in Omega 6 Polyunsaturated Fatty Acids
Now the thing is Omega 6 (pro-inflammatory) is considered an essential fatty acid. And it is good for you, in the normal amounts. What is important in terms of how it is consumed is the ratio of consumption along with omega 3 (anti-inflammatory) fatty acids. Unfortunately vegetable oil (including sunflower oil) is added to most processed foods as it is cheap. This means that we are currently mostly consuming Omega 6 fatty acids and omega 3’s in the incorrect ratio. Instead of 1:1, the Western diet is currently at about 16:1 (2). This uneven ratio unfortunately contributes to inflammation and potentially chronic diseases (3)

Extremely Unstable when Heated or Exposed to Air

Due to the fact that sunflower oil is a Polyunsaturated oil, it is extremely unstable at high temperatures and will easily react with oxygen (oxidise).

If you are one of those people who like to say that you hardly use oil in any case, remember that the longer the oil sits in the bottle, on the shelf, exposed to light and air- the worse the quality of the oil. In when we bring the sunflower oil home it is entirely possible that it is already completely rancid (oxidised) and therefore toxic for human consumption.

When you do use sunflower oil to cook with it releases harmful chemicals called aldehydes. Aldehydes have been linked to various illness including cancer, heart disease and dementia (4,5). Something to be even more aware of is that these compounds have even been linked to lung cancer as when someone is breathing in the fumes from cooking they are also breathing in the toxic byproducts (6).

What You Should be Cooking with Instead:

Firstly avoid any oil which is not cold pressed. Olive oil for instance is made using a machine which simply presses the olives and releases the oil. Coconut oil is also incredible, but make sure you aim for cold pressed and virgin/extra virgin or raw to get the best quality product. No heat or chemicals involved thats what we should be aiming for. Last but not least on our list is Grass fed butter, yes it is dairy, but this is most definitely a personal choice.