Flaxseeds and flaxseed oil have been cited as one of the healthiest seeds to include in most diets. Many gluten free recipes also call for ground flaxseed meal. But is flaxseed really a healthy Paleo diet ingredient? What are the benefits of this little seed and should we be including it in on a daily basis? 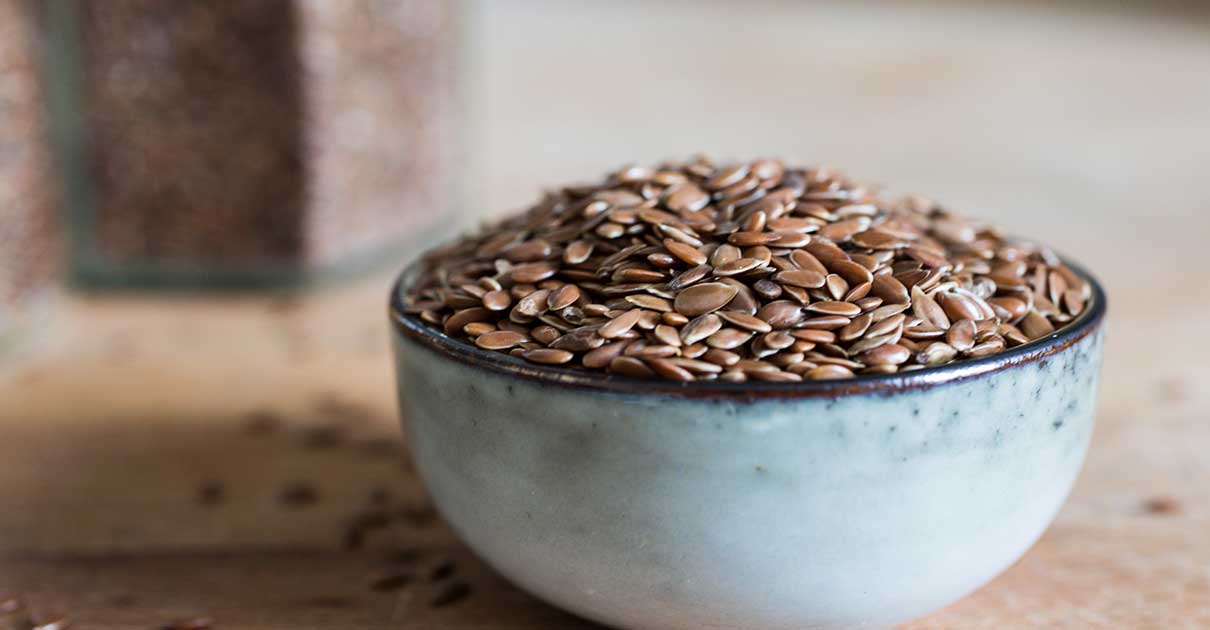 Flaxseed, which are sometimes called linseeds, are tiny little brown or tan colored seeds. They are celebrated nutritionally as they are the richest plant based source of omega 3 fatty acid (anti inflammatory fatty acid) on the planet. Flaxseeds are harvested from the flax crop. Interestingly the fabric made from flax is known as linen, which you might know as the light breathable material (1). Pretty useful plant!?

100g of flaxseeds will give you the following:

One glance at the nutritional information above illustrates just how nutritionally dense these seeds are, in fact one can easily put them in the category of a super food.

What’s in it for us?

With all these nutrients available lets look at the benefits of including these seeds in our diet.

If you have a look at the nutritional information and do a bit of quick maths you will see that flaxseeds are seemingly quite high in carbohydrates. This is misleading though, in fact almost all of the carbohydrates in flaxseeds are actually 95% fiber (3). This makes it a perfect supplement for low carbohydrate diets.

Not only are flaxseeds packed with fiber, but also with both types of fiber; soluble and insoluble fiber. This means that for anyone suffering from frequent constipation or other digestive issues, flaxseeds are the all-natural laxative.

In addition the fiber improves our digestive help by feeding our healthy gut bacteria ( 4). Win- win.

Whilst flaxseeds are high in protein (18%) the disappointing thing is that they do not give us all the amino acids our bodies need to survive. They are lacking in an essential amino acid– Lysine. They are however still great sources of arginine and glutamine, both of which are important for our health. In addition the protein in flax seeds may be helpful in protecting us against various conditions including high blood pressure, cholesterol and inflammation (5,6)

Flaxseeds are 42% fat. But not just any fat.

ALA is an essential fatty acid that our bodies cannot produce on their own so we have to obtain it from other sources.Whilst the best sources of omega-3 fatty acid (EPA and DHA) come from fatty fish such as salmon, the ALA found in flaxseeds should still be included in a healthy diet (7)

ALA is found to be linked to decreased risk of various conditions such as heart disease, lowered risk of stroke and chronic kidney disease (8, 9).

Flax seeds are very high in a specific antioxidants called lignans. Lignans are types of antioxidants known as polyphenols. The protective effects of these antioxidants are staggering but include immune boosting effects which may prevent the common cold and flu and could also prevent candida and yeast growth in the body.

Anything to Look Out For?

You know the saying, too much of a good thing…. well this goes for flaxseeds as well.

In general, flaxseeds are well tolerated by most of the population. This tolerance is obviously affected by the amount you take in so take care to watch your dietary intake.

Higher doses of flaxseeds can cause adverse effects:

One of the main reasons flaxseeds help prevent heart disease is the fact that they reduce the chances of blood clots in our arteries. Conversely however, this advantage could be a potential risk as this ‘blood thinning‘ effect can be a problem for those who are already on blood thinning medication like warfarin or even aspirin. Once again this is only something to be concerned about at high doses of flaxseeds (10).

Aside from being a big word, cyanogenic compounds are a naturally occurring plant compound found in flaxseeds. In a nutshell, these compounds can be disastrous for your thyroid gland when consumed in large quantities.

To avoid this side effect keep your flaxseed intake under 50 grams per day (about 5 tablespoons) (11).

like most seeds, flaxseeds contain phytic acid. Phytic acid is known as an anti nutrient in that it may reduce intestinal absorption of other important nutrients such as iron or zinc. However this only effects the nutrients you are taking in at the same meal as the flaxseeds.

Simply don’t have flaxseeds at every meal.

So, Is Flaxseed Paleo?

Strictly speaking flaxseeds might not have been around in the Paleolithic era, however in this instance the benefits of including it in your diet will outweigh any potential negatives. Like any healthy ingredient the key is to include it in moderation as part of a wide range of different nutrients.

For the best results stick to the limit of about 3-5 tablespoons per day, and to increase your absorption of the nutrients grind your flaxseeds before adding to your breakfast or smoothie etc.

Be sure to store your flaxseeds in a cool dark place, even in the freezer as they have a tendency to go rancid quite quickly.