Chicken and rice soup has been a favorite of mine for years. So you can imagine how I was a little bit worried when I first switched over to the paleo diet, considering the emphasis on keeping your carb intake controlled. Fortunately, there are all kinds of little tips and tricks you can do with the paleo diet to come up with low carb alternatives. One of the best alternatives for rice that I’ve found is to use cauliflower rice. It offers nearly the exact same texture while keeping things nice and low carb, so it fits in perfectly with this instant pot chicken and cauliflower rice soup recipe. 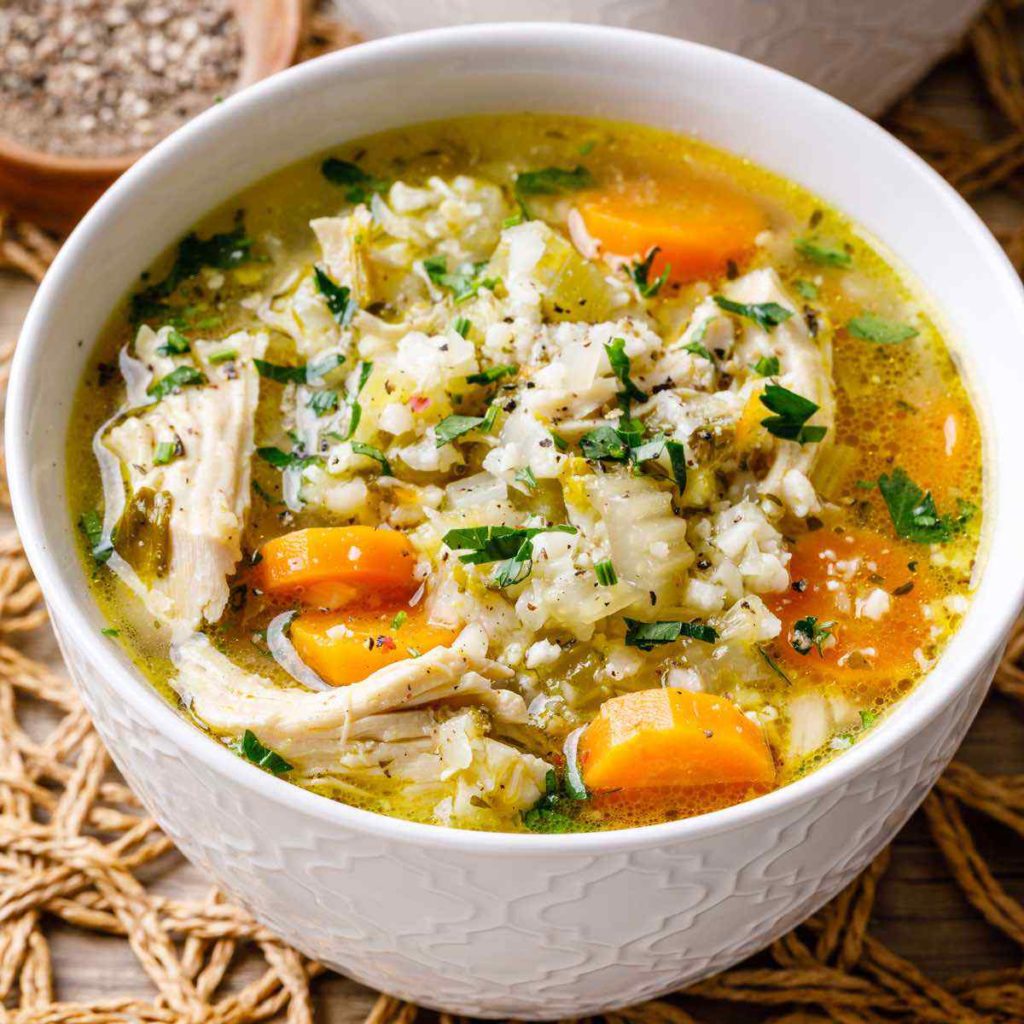 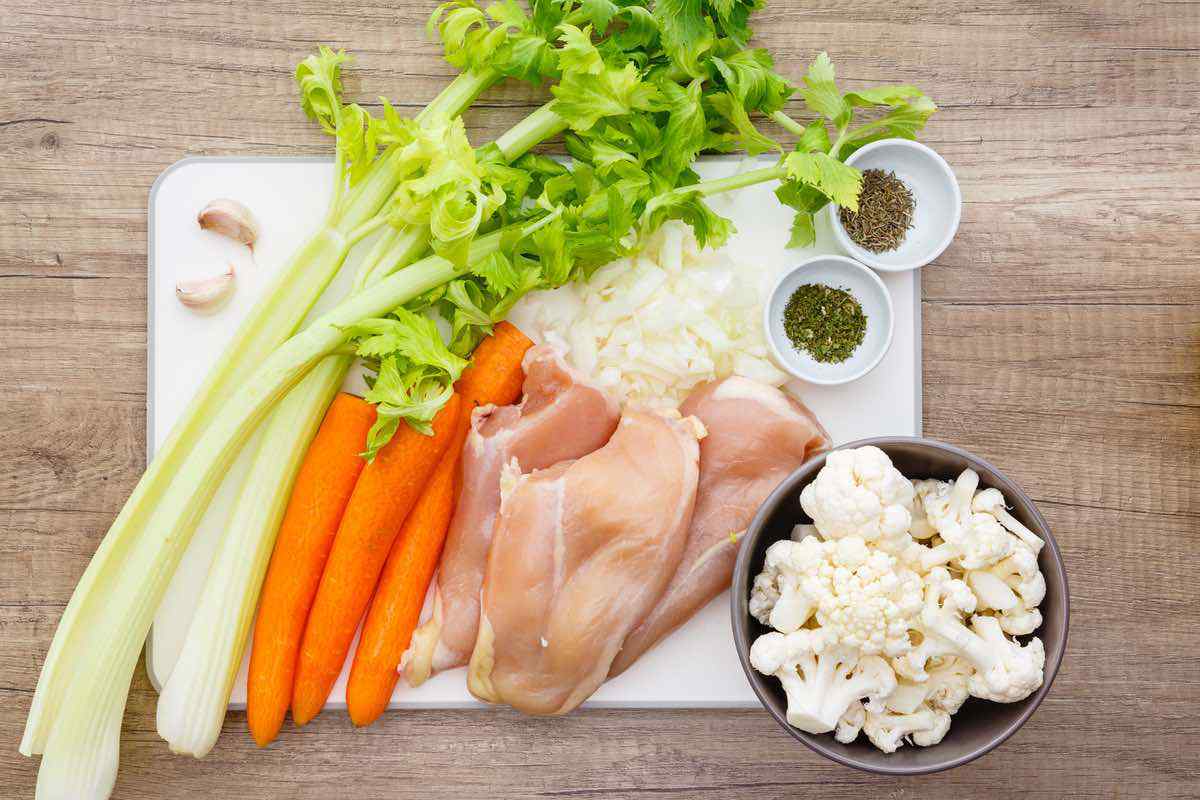 I feel like it can be a bit of a cliche to make chicken soup when someone is sick but I’m guilty as charged. I feel better almost instantly when I’m served piping hot soup, so I’m always ready to make this for my loved ones just in case they need it. This low carb Instant Pot chicken and cauliflower rice soup recipe helps you make this homestyle classic with very little hassle. Using the saute feature, you can get tons of flavor by cooking the onion, carrots, celery and garlic first. Once they’ve all softened, they’ll help transform your broth. This tiny step can make or break your broth because with an Instant Pot, you can simmer your soup for hours on end to really bring out those flavors.

Add Chicken for Flavor and Protein

Among the three macronutrients — carbohydrates, fats, protein, studies show that protein is the most satiating. It helps you feel full, even with less food or food ‘volume’. (1) This is because it helps reduce the hunger hormone ghrelin, while also boosting the peptide YY, a hormone responsible for making you feel full. (2) 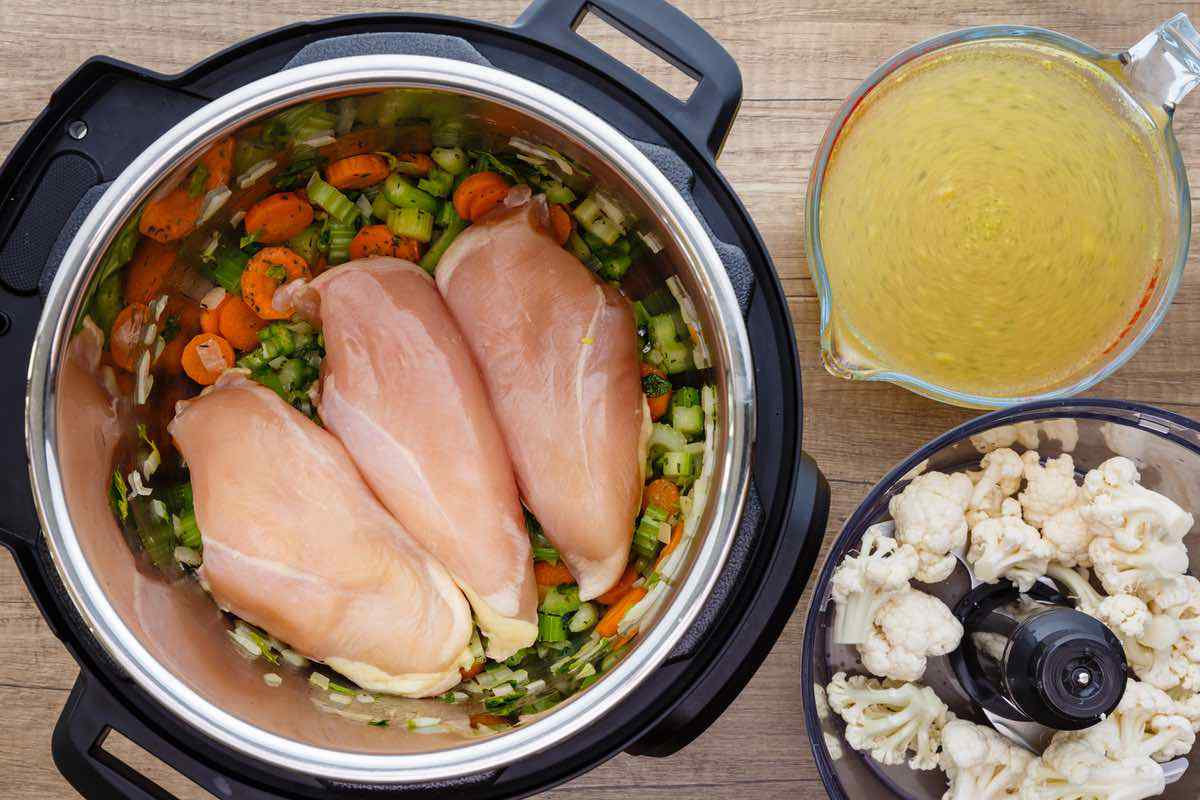 These effects on your appetite can certainly add up over time, especially if you’re interested in protein and how it relates to weight management.

There’s a reason why many healthy diets or weight loss diets revolve around protein intake. In one study, results showed that a 15-30% increase in calories from protein helped reduce the overall calorie intake of the overweight female participants of the study without them having to intentionally restrict their food intake. (3)

Which is Healthier: Thigh Meat or Chicken Breast?

The results are fairly split on this one. While some people prefer the tender meat of the chicken thigh, whole others enjoy the leaner chicken breast, both cuts are good sources of protein. However, it’s important to consider the calorie content, as well as the fat content for each. 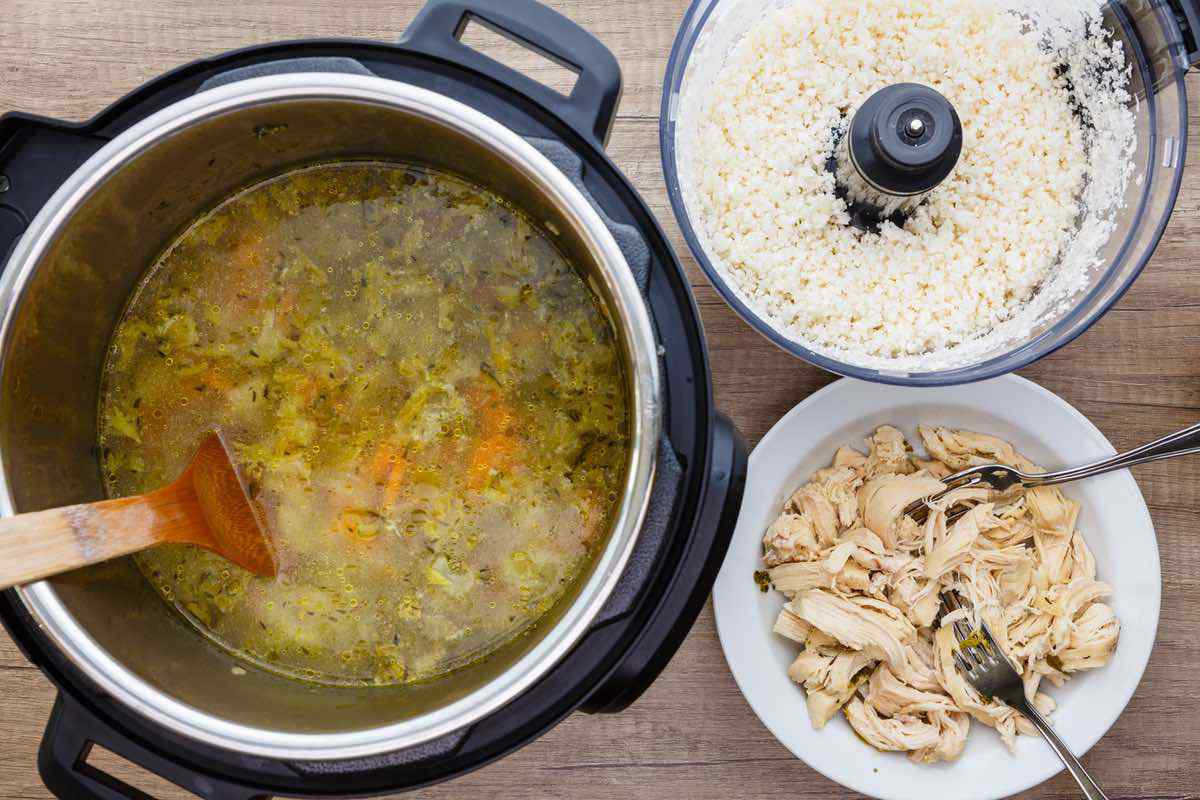 Comparing the two cuts side by side, we see that there are some notable differences:

Both the chicken thigh and the chicken breast contain similar amounts of sodium, cholesterol and iron, so you’re good with either.

Even if the fat content of the chicken thigh is higher, there’s more to it than simply comparing how many grams are in either. Chicken thighs contain saturated fats which have gotten a bad rap over the years, as well as monounsaturated fats, which offer a lot of health benefits. While it’s not recommended that you cut out saturated fats completely, it’s best to limit it to the recommended range.

Adding an extra serving or two of vegetables to your diet can’t hurt.

With this recipe, you could absolutely use your carb of choice like a paleo-approved grain, but I’m sticking to cauliflower rice because I love the texture of it and it’s become one of my favorites over the years because it’s also high in fiber. 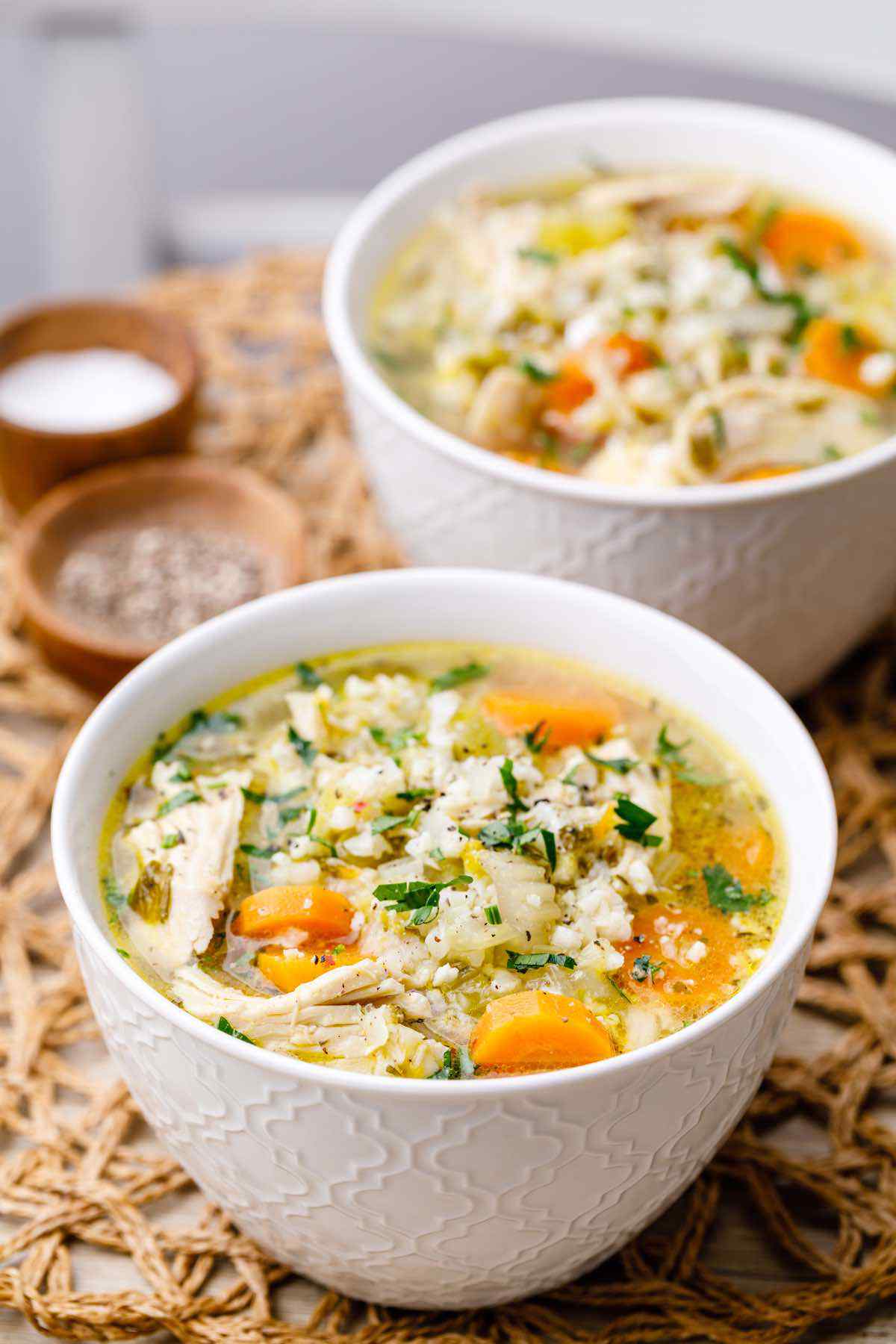 Cauliflower is one of the healthiest cruciferous vegetables around! It’s packed with vitamins, minerals, and I mentioned fiber. This is important because we don’t always get our daily recommended intake of fiber, so adding vegetables like this can certainly help with that. Also, cauliflower contains powerful antioxidants that help fight free radical damage in the body and boost our immunity.

How to Make Cauliflower Rice

Cauliflower rice is available in most stores now in the freezer section. However, if you’re more interested in making your own, it doesn’t take more than half an hour to make. You’ll need some cauliflower, a food processor, and small pot to boil your riced cauliflower.

Simply put your cauliflower into the food processor and let it get chopped up into small pieces. Once it resembles the texture of rice, it’s ready.

Some like to cook the cauliflower first before putting it into the food processor, while others prefer cooking it after. It’s entirely up to you. Simply boil the cauliflower until it’s tender and then transfer it to an ice bath (whole cauliflower heads).

Another way to cook your riced cauliflower is to simply saute it in some olive oil over medium heat. Be sure to work in batches and don’t overcrowd your pan to ensure that your cauliflower rice is cooked evenly.

The cooking method matters a lot in terms of calculating the overall calorie content of your food. If you deep-fry your chicken every day, it won’t matter which cut of chicken you choose–it’s going to have a lot of calories either way. Compare deep-frying to steaming or stewing chicken in a water-based broth, then you’re going to significantly cut down on the calorie content of your food.

Baking and grilling are considered healthy ways to cook, so long as you don’t baste too much oil or butter over your chicken. Keeping the skin on is a good way to keep the chicken moist without having to add excess oil or butter.

Another great way to cook chicken is with the Instant Pot. The Instant Pot makes the chicken meat tender, while the flavor is mixed into the broth. The end result is a flavorful dish that’s still enjoyable and satisfying without the excess calories.

Speaking of the Instant Pot…

How to Safely Release Pressure in the Instant Pot

If you’re new to cooking with the Instant Pot, you’ll need to familiarize yourself with its functions and buttons. Also, for safety purposes, make sure you know how to release pressure in the Instant Pot.

The first is natural release, which basically means that the pressure will release slowly over time and there won’t be a need to adjust the venting knob at all. This method will allow for continued cooking, but it’s also more time-consuming. For quick dinners, this method will take too long.

For this Instant Pot Chicken and Cauliflower Rice Soup, you’re going to want something quicker so the quick release will come in handy. It’s perfect for when you need dinner to be served in a hurry. 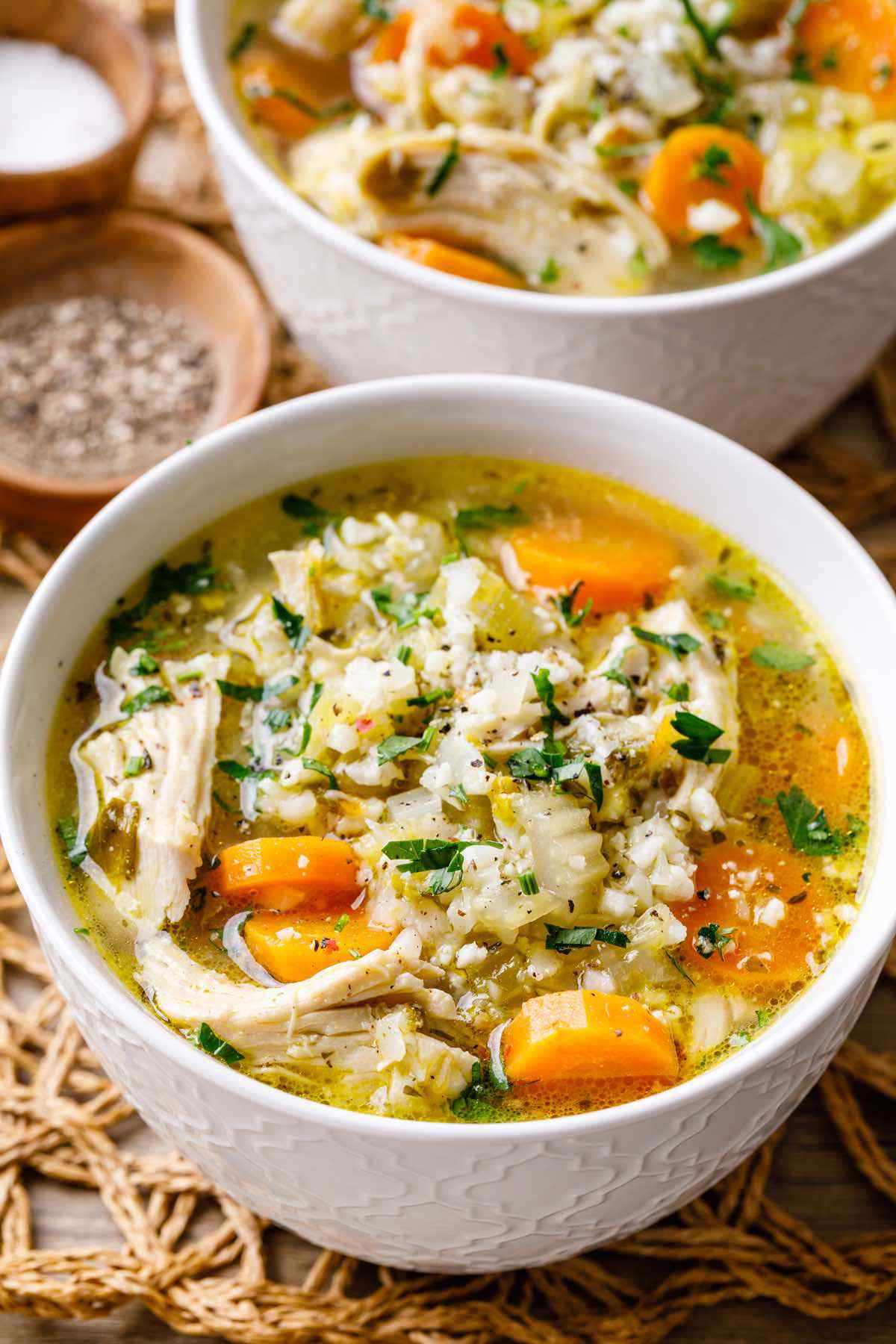 How to Use the Quick Release in the Instant Pot

For this Instant Pot recipe, we’ll be using the natural release as well as the quick release.

The quick release will stop the cooking more abruptly than the natural release, so it definitely comes in handy when you need dinner ready in a hurry. When your soup is done cooking, simply turn the venting knob to “vent” to release the steam.

It’s important to protect yourself from the quick rush of hot steam as it may burn you. The Quick Release makes the pressure inside the Instant Pot drop in mere seconds instead of minutes, so exercise caution when doing so. Once the pressure is released, the lid will open easily. If you have to forcefully open the lid, it means that it is still under pressure and should not be opened!

Making Your Instant Pot Chicken Soup Ahead of Time?

You can make this soup ahead of time, no problem. It’s actually a great way to set yourself up for the week without having to worry about what to cook. The broth is excellent as a standalone, or used as a base for other dishes.

My best tip is to keep the cauliflower rice separate. 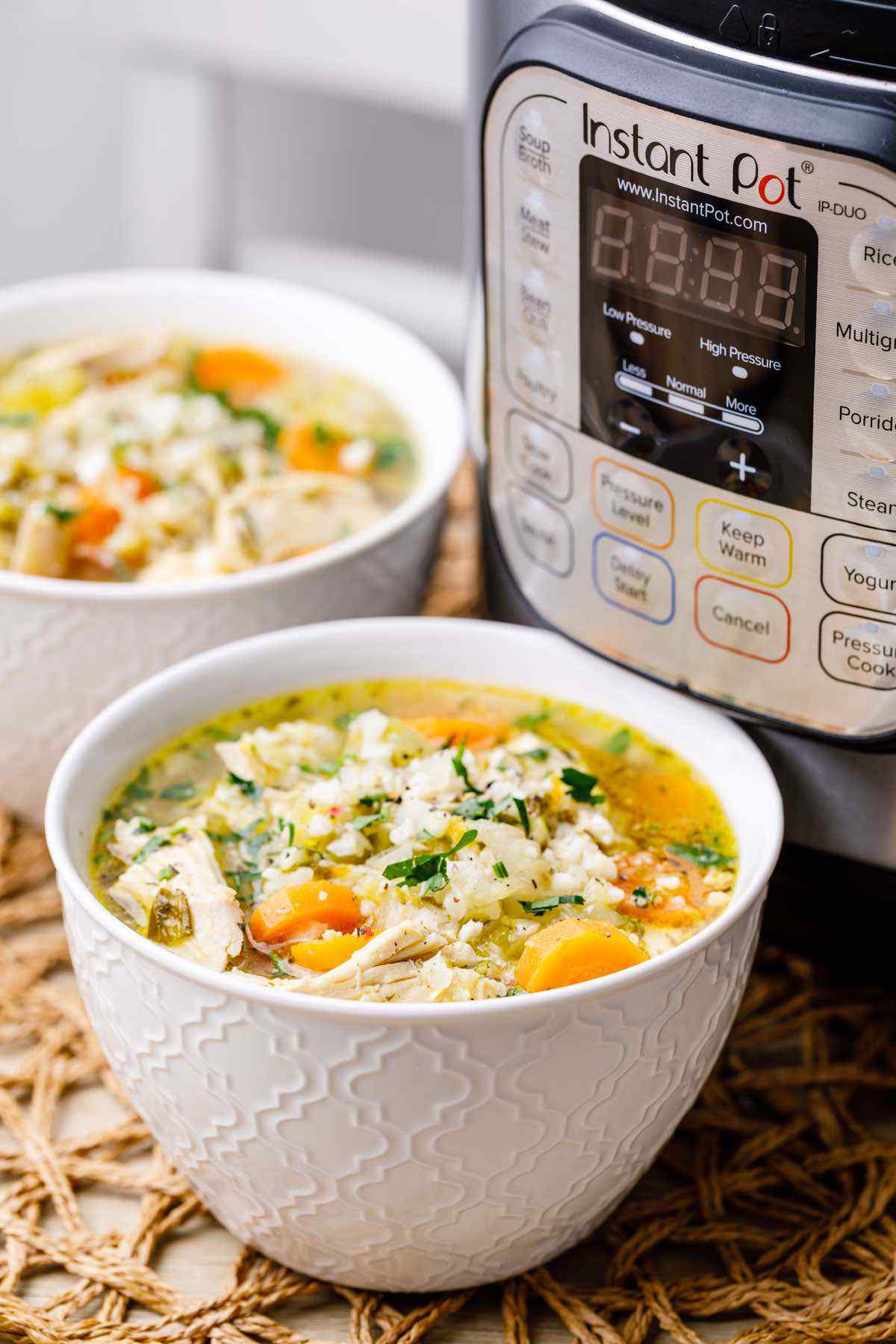 Remember, you want al dente cauliflower, so take a few extra minutes to boil a new set of cauliflower rice when you’re ready to serve. Freezing your soup and reheating later on is a smart decision as this soup reheats beautifully. Again, keep the caulirice separate and only defrost what you’re going to eat.