Is hummus Paleo or not? Hummus is often served up as a seemingly healthy dish, but if you’re following the Paleo diet you’ll want to take a pass when this gets passed around. It’s good to remember that Paleo isn’t a diet plan that says you can’t have snacks, and you can’t have good-tasting food, but you have to pick and choose which snacks you’re having and make sure they don’t include foods that violate the Paleo authorized foods list. 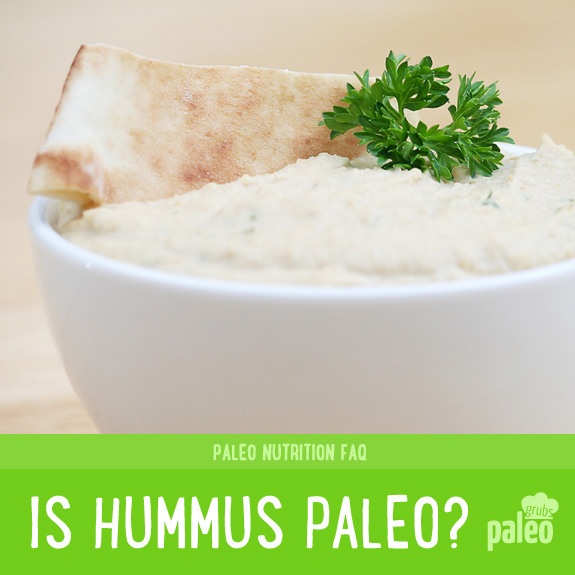 The Main Ingredients of Hummus
While the recipes vary, most hummus is made from mashing up chickpeas, mixing in some tahini, and then adding lemon juice, salt, and pepper to taste. The only real problem with hummus is that it’s made from chickpeas, as as we’ll soon see chickpeas are a no-go on Paleo. Below you’ll find a workaround for how to make a delicious hummus style dip without using chickpeas so you can still get most of the flavor without worrying about going off track.

Chickpeas are a Legume
Chickpeas are a legume, and as such they aren’t allowed on the Paleo diet. Chickpeas contain phytic acid which makes it harder for the body to absorb key nutrients. By abstaining from these sorts of foods you’ll be helping to increase the amount of vitamins and minerals absorbed by the body, which should make you feel better on a daily basis, and over time. Other legumes you’ll want to avoid are peanuts,

It’s Important to Exclude Foods on Paleo
The Paleo diet isn’t something that was just dreamt up by one person, it has its foundation based on how foods react with our digestive system, and excludes foods that give it trouble. The foods it allows have been shown to be well-tolerated by a large portion of the population, which makes sense since they’re foods we’ve eaten for many tens of thousands of years. It looks to remove foods like dairy and grain from the diet because these are unnatural foods that we’ve only started eating relatively recently with the advent of cultivation and farming.

Once you start ignoring rules on Paleo it becomes a slippery slope. Ignore enough of the guidelines and then you’re not really doing Paleo anymore, you’re doing something else that isn’t exactly Paleo, and won’t get you the same sort of results. But this isn’t the right mindset to get into. If you’re viewing Paleo from a shortage mentality, focusing on the things you can’t have, you’re bound to fail, as this is the Achilles heel to even the most effective diet plans. You have to have an abundance mentality and focus on the fact that on Paleo you can pretty much have whatever your heart’s desire, as long as you make it using Paleo-approved foods.

How to Make Paleo Friendly Hummus
To make hummus Paleo friendly you’ve got to get rid of the chickpeas, which requires a little creativity, and we’ve seen everything from zucchini to cauliflower to macadamia nuts or cashews used to replicate the taste and texture. It may take a bit of trial and error on your part, but if you’re a big fan of hummus and have been missing it on the Paleo diet it’s worth the extra effort. 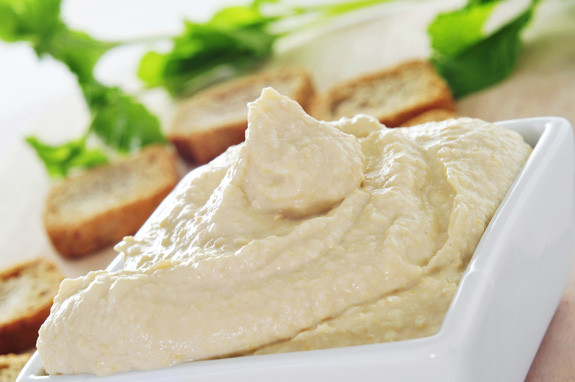 You can keep the tahini, as it’s derived from sesame seeds. Use some lemon juice, sea salt, and organic freshly ground black pepper and you’ve got a dish that is somewhat like hummus but without anything in it that will slow down your Paleo progress.

Now the only question is what will you dip in your newly created chickpea-free hummus? May we suggest our amazing Paleo-friendly tortilla chips? They’re awesome and taste great in hummus, guac, and salsa.

If you are going to eat regular hummus, be sure to make it yourself so you can have quality control over the ingredients. Barring that, opt for organic hummus if you’re going to buy it from the store.

Don’t Eat Hummus on Paleo
While eating hummus likely won’t throw you off your Paleo track completely, it’s still not an authorized food on Paleo, and isn’t recommended for regular consumption. Luckily there are ways around it so that you can still enjoy hummus, you just have to think outside the chickpea. Again, it might not ruin your day, but if you’re looking for the best results from following the Paleo plan, you actually have to stick to the plan and avoid foods that aren’t authorized.