When you’re pressed for time but need an amazing meal try my rosemary garlic hasselback zucchini with bacon. It’s a surefire hit that doesn’t take all day to make. 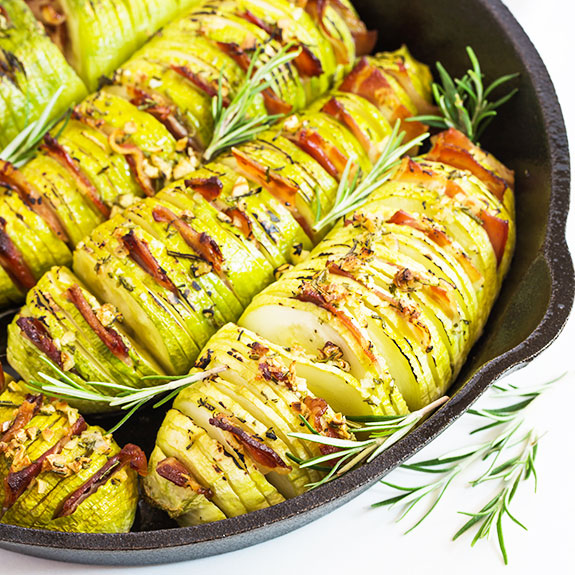 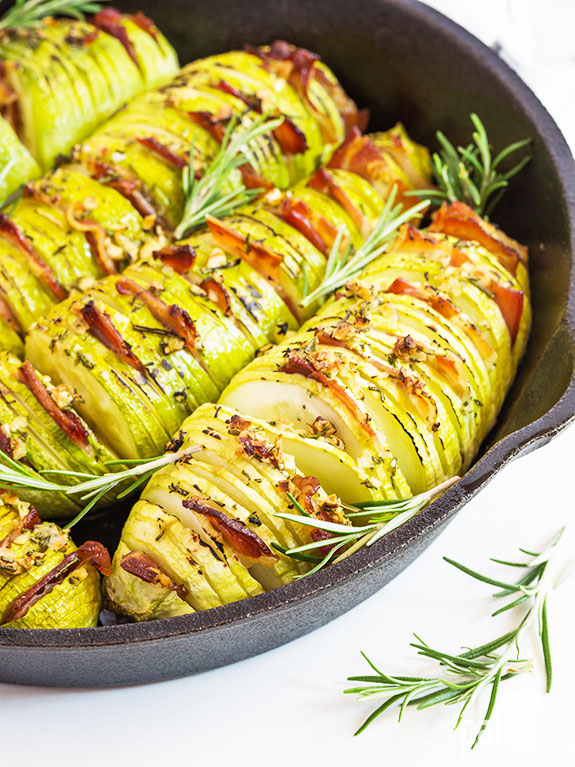 But this move I was smart. Instead of letting the unpacking drag on for weeks, I scheduled a small dinner party exactly one week after I moved into my new place. That meant I had to be unpacked 6 days after my move so I could spend the day of the party shopping and cooking. And not just unpacked – I had to be party-presentable. 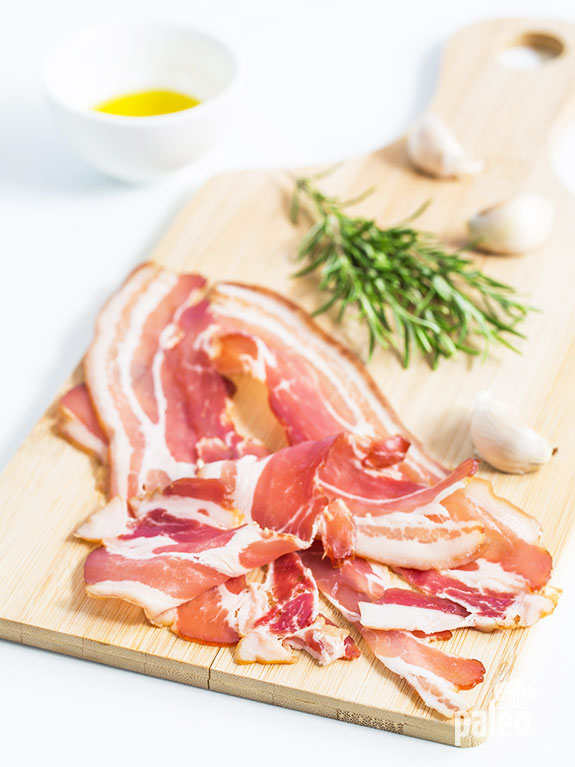 There were definitely a few times that week that I thought “I am not smart at all. This was my dumbest idea to date.”

But I made a commitment to myself and silently to my guests and, with a lot of help from my mom (hi Mom!), it all came together in the last hours of the days before my dinner party. 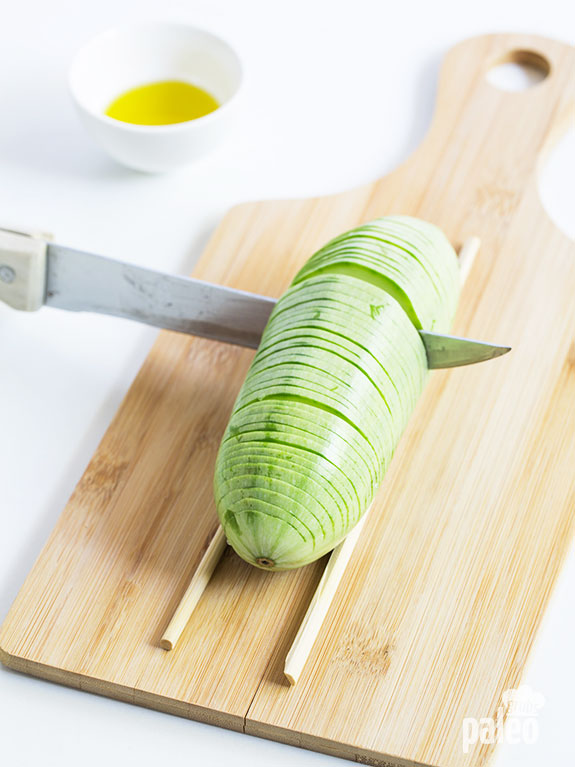 All week I had been ruminating on what to make. You have a lot of time to think when you’re unwrapping things that aren’t Christmas presents. I knew I wanted to make chicken because I had a new recipe to try. But no matter how new and how tasty a new chicken recipe is, it’s still just chicken. A little boring, to be honest. 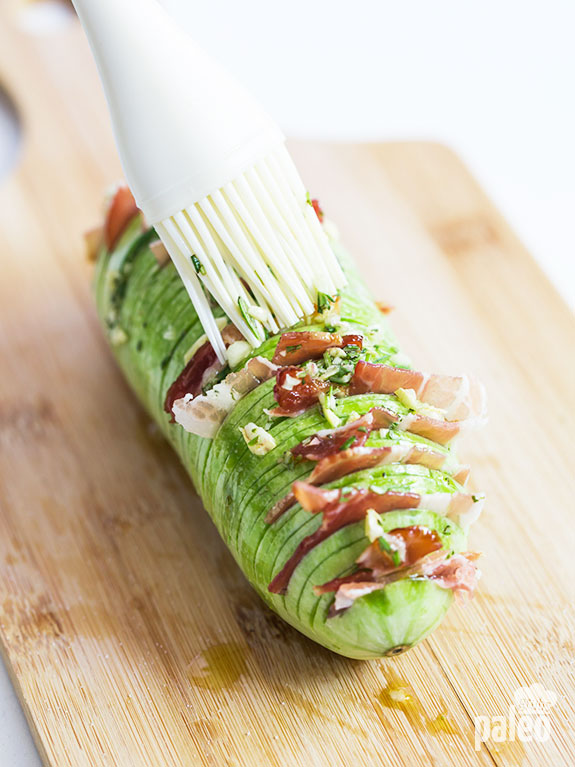 So I needed a really great side dish to show off my culinary creativity.

Then I remembered this recipe for rosemary garlic hasselback zucchinis with bacon. One thing I like about this as a side dish is that it’s BIG. Where most people might have a heap of rice or a big honkin’ lump of mashed potatoes, a zucchini will more than fill that space, so you don’t miss anything on your plate like you might if you just did green beans or something.

And, hey, it’s stuffed with bacon. We all know you could stuff a brown paper bag with bacon and it would probably taste amazing.

Not that this dish would be anything but amazing even without the bacon. The garlic, rosemary, and olive oil lend tons of flavor, which the zucchini carries well. Zucchini is great because it has very little flavor itself – that’s why it can be used in sweet things like zucchini bread or savory things like this dish and still perform amazingly.

I made everything ahead of time and then threw these babies in the oven about 40 minutes before we were ready to eat. 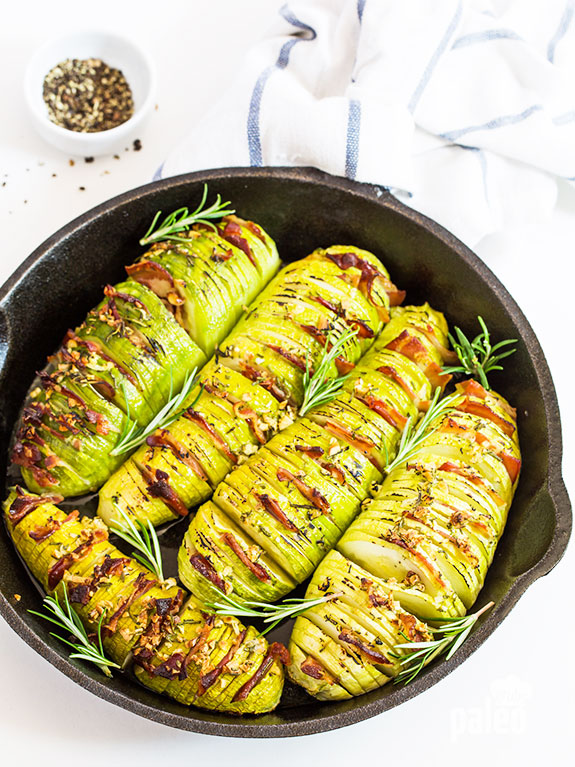 My guests loved them. One friend remarked that she had never been a fan of zucchini, but that this recipe changed her mind. And everyone was impressed with my ability to have my apartment so “together” in one short week! (Another shout out to Mom for that…thanks Mom!)