Rice may be a gray area with Paleo, but it’s best to avoid it if you want to follow the guidelines exactly. These fried rice recipes use cauliflower instead of rice so you don’t have to worry that you’ll even be bending the rules slightly because cauliflower is an approved vegetable on Paleo. While they won’t taste exactly like fried rice made with rice, they are cooked up in a similar style, with similar ingredients, so you get many of the same flavors, which can help to satisfy a craving if you’ve been having one. 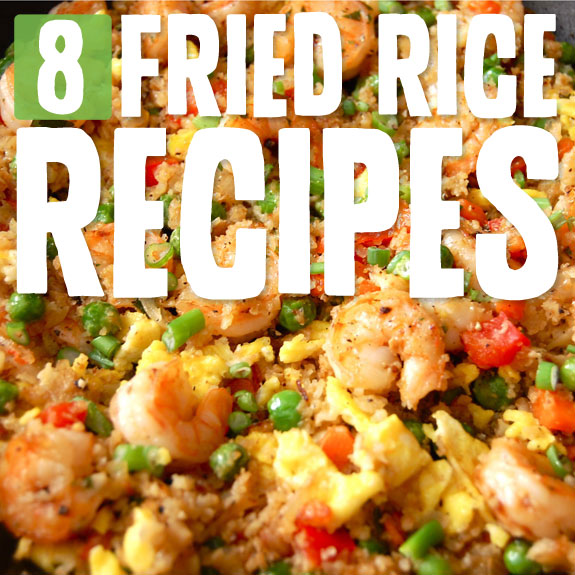 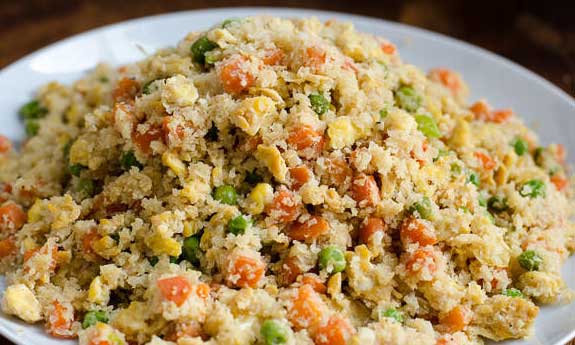 1. Paleo Chinese Cauliflower Fried Rice
Let’s start off with a cauliflower fried rice recipe that really tries to bring you the same taste you’d expect from a Chinese restaurant. The peas are a bit of debate when it comes to the “is it Paleo?” question, so you can simply leave them out if you want to avoid the discussion. You’ll want to leave out the soy sauce as well, because even gluten-free and grain-free versions aren’t Paleo friendly. The rest is all good, including plenty of cauliflower fried up in coconut oil to give it a buttery fried taste that mimics the kind of dish you’re going for when you’re looking for a good fried rice recipe.

2. Chicken Fried Rice
This chicken fried rice is a meal unto itself, with pretty equal parts chicken to cauliflower. They include a marinade for the chicken so it will be extra flavorful and tender. It’s all scrambled up together so it gets the same look as a traditional fried rice recipe, but there isn’t any rice in this at all, using cauliflower instead for added nutrition, and no argument as to whether rice is something you can have while on Paleo. They give the pointer to add some coconut aminos or red chili paste to spice this up when it’s all finished. That’s a pretty good idea for those that like to feel the heat when they have their fried rice.

3. Mealworm Fried Rice
One item that is no grey area on Paleo is insects. Certainly Paleo man would have dined on them if he could find them, as they were a great source of protein. One way to consider if it’s Paleo is to think about the Bear Grylls survival show. If Bear would eat it, chances are high that Paleo man would eat it. The mealworms don’t stand-in for the rice, they’re using cauliflower for that part, they’re just added to the mix to make it more nutritious. It’s not as if they’re using live mealworms, these come in a package just like actual food so the yuck factor has been reduced. 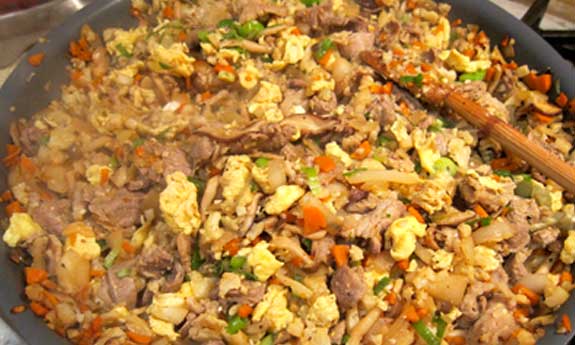 4. Spicy Ginger Cauliflower Fried Rice with Pork
If you like your fried rice spicy, go with this ginger cauliflower fried rice recipe that includes pork so it’s very satisfying. The rice in this fried rice is really a head of cauliflower. You probably didn’t think to eat massive amount of cauliflower in the form of rice before going Paleo, but that’s just part of the process, trying new things and learning how to sub in good foods for ones that might give you trouble.

5. Orange Pork Fried Cauliflower Rice
The orange flavor used in this recipe may conjure up memories of Orange Chicken, but instead they’re using pork. It’s using sesame seed oil, so it will have an Asian taste to it, since this is an oil used in many different dishes throughout Asia. The mix of vegetables used in this fried rice is quite extensive, and is sure to please even the pickiest eaters. They are using orange pork for the orange flavor, so if you only use regular pork it won’t taste very orange at all.

6. Pineapple Fried Cauli Rice with Garlic Prawns
Pineapple works great with this fried rice and prawn recipe because it adds a sweetness to the meal while still keeping you on track with Paleo. They’ve even managed to sneak some bacon into this, so it’s going to taste savory and delicious, and provide a nice counterbalance to the pineapple’s sweetness. That, plus the garlic, and you’ve got a lot of tastes for one dish, which is often a sure sign of a winner. 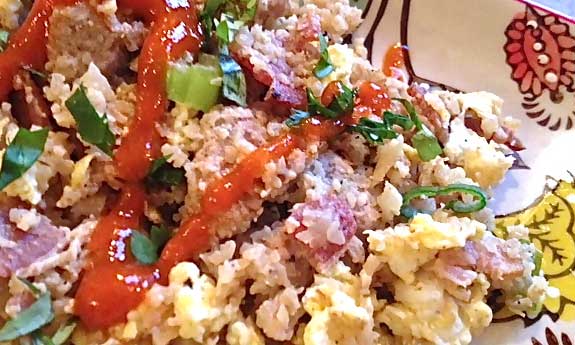 7. Paleo Pork and Bacon Fried Rice
Bacon makes the fried rice taste sinful, and if you’re looking for a fried rice recipe that will make you forget that there’s no actual rice being used, this is the one to go with. You’re not only getting bacon, but additional pork in the form of tenderloin. They’ve really upped the ante when it comes to flavor on this one by using two different types of pork, and buy using a lean and tender cut like pork tenderloin for the other type of pork. If you’re in the mood for spice she says to add a bit of sriracha sauce to it and it will spice things right up without making it too spicy.

8. Fried “Rice”
This is a basic fried rice recipe that you can keep handy when you need a quick side dish. Using cauliflower instead of rice means that you’re getting a vegetable serving to help you keep your meat and veggie ratio about even. You’ll often see bacon added to Paleo-friendly meals because hey, bacon is allowed on Paleo. Why not add it, since the most popular diet programs in the world all shun it. You won’t find a better fried “rice” recipe than this one, she’s covered all the bases and you’ll gobble this down without even noticing it’s cauliflower.