Fried chicken is not necessarily something you can’t have on Paleo, as long as you make it according to Paleo regulations. This means you’ll have to find a suitable alternative to flour for the crispy coating, and it also means you’ll need to use an oil that is Paleo approved. Once you fix those two glitches, you are on your way to having a delicious, meaty entree that won’t spoil your dieting plans. Just be sure to have a side of vegetables with your chicken and you’ll be all set. 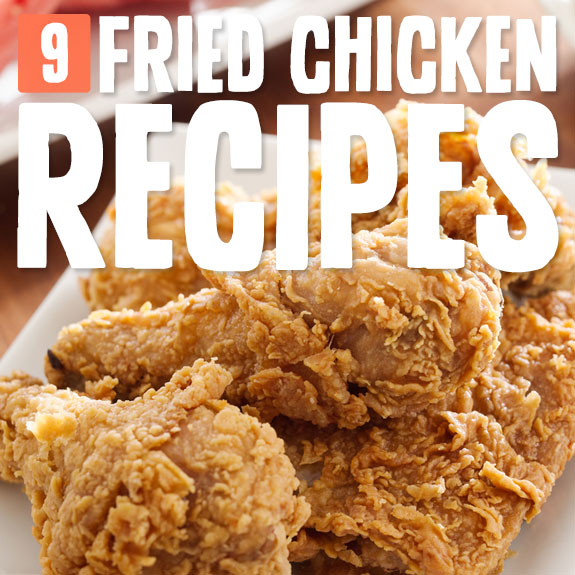 1. Pan Fried Chicken
This pan fried chicken recipe is both gluten-free and dairy-free, and it also conforms to the Paleo way of eating. They’re using almond flour to coat the chicken well, and they are using chicken thighs, so you will get big meaty pieces of dark meat chicken.

To help it taste even more delicious they’re using paprika and garlic powder as well as a bit of cayenne pepper if you want this to be spicy. They recommend using an oil of your choice, and with Paleo your oils are coconut oil, olive oil, avocado oil, sesame seed oil, and macadamia nut oil, among others. 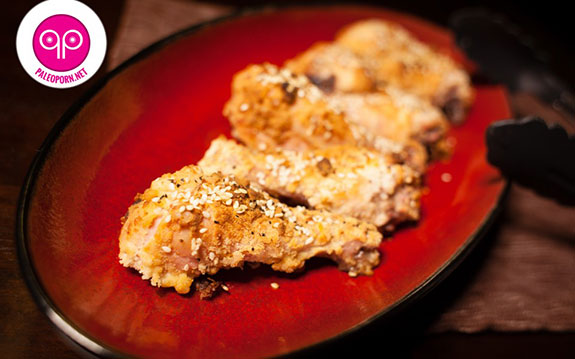 2. Paleo (Not) Fried Chicken
This fried chicken is not fried at all. It’s actually baked in the oven, so you won’t have the concerns of a deep fried dish and all the excess oil it brings. Even though you’ll be using a healthier oil than many of the oils used in traditional fried chicken recipes, you still want to take it easy as far as your total intake of oil goes. Here she is using sesame oil, as well as sesame seeds for both presentation and flavor. She’s using chicken legs as the cut of choice, and is seasoning this up with ginger and salt and pepper. Coconut flour is used to give it a crispy coating.

3. Cherry Fried Chicken
If you’ve always wondered what you can do to your fried chicken to make it different, give this cherry Fried Chicken a try. It uses a tart cherry concentrate to infuse the chicken with cherry flavor, and also uses a combination of herbs such as thyme and parsley. They’re using chicken tenders here, so you will not have to worry about bones, and for the oil they are using coconut oil, one of the oils that are approved on the Paleo diet. They’re serving this up with a whipped sweet potato, making it a complete Paleo meal.

4. Oven-Fried Chicken
Leave it to the Everyday Maven to come up with a way to make chicken that tastes like fried chicken without the need of a deep fryer. She’s using the oven here, and coating the chicken in a mix of spices that is sure to make you happy that you decided to try this. Almond meal and almond flour combine to give this just the right outer coating, and oregano, paprika, and cayenne pepper will give your taste buds a treat. She uses an olive oil sprayer to give each piece of chicken a nice spritz, and that’s it as far as oil goes. Healthy, delicious, “fried” chicken from the oven. 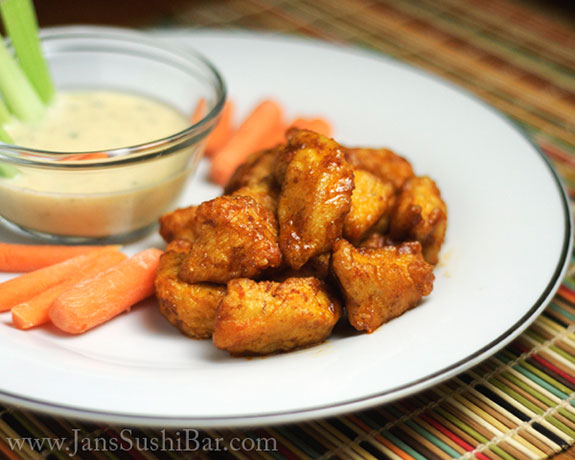 5. Buffalo Chicken Bites
Buffalo chicken wings are awesome, but if you like them boneless this is the way to go. She fries up each bite until it’s golden brown, and shows you how to make a buffalo sauce that rivals anything you’ll find in sports bars across the country. The best part is that all of the ingredients used have been selected because they adhere to a healthier way of eating. Examples include the use of palm oil shortening as the frying agent, wheat-free ingredients, and ghee instead of butter. The chicken gets marinated before it gets fried, so the pieces will be extra tender and flavorful.

6. Fried Chicken and Waffles
This classic combo is something you may have thought you’d never see on a diet plan. But Paleo is all about working with what you can eat, rather than lamenting over what you can’t eat. Here they’ve made sure that the fried chicken is using a wheat-free coating in the form of arrowroot powder, and is fried up in palm shortening or coconut oil to keep it Paleo. The waffles are grain-free, using coconut flour for the right consistency of waffle batter. Cook them both up, use 100% pure maple syrup on each and you’ll be in chicken and waffle heaven.

7. Paleo Chicken Nuggets
Have you seen the pictures of the “pink slime” that results from the mechanically separated chicken process? It’s disgusting! It’s used to make all sorts of formed chicken products, so unless you can identify your chicken is in breast, leg, thigh, or wing form, who knows where it came from. With this Paleo chicken nugget recipe you won’t have to worry about the quality of the chicken, because you get to pick it out and cut it up from whole chicken breasts. Coat it in almond meal, add in a bit of coconut, and fry it up and you’ll be able to feed yourself or your family a much healthier version of nuggets. 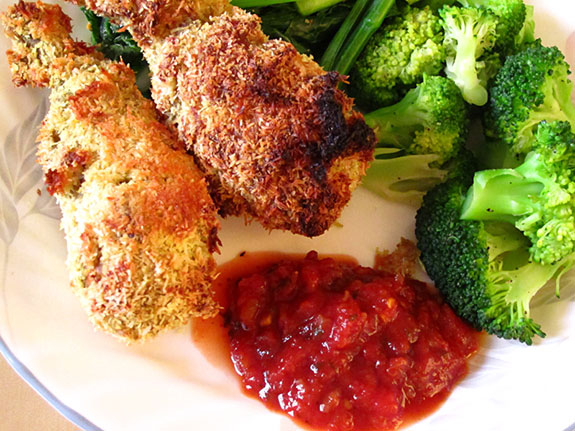 8. Braised-to-Oven Fried Chicken
These drummies are a nice hybrid between fried chicken and baked chicken. You’ll get the delicious flavor of fried chicken but with less oil because mostly it is baked. Once you finish braising it you pop it in the oven to let it finish cooking. The paste that you make up to coat the chicken in is what gives it its flavor, with a mix of garlic, onions, and turmeric root among others. This is going to give it a unique flavor, unlike most fried chicken you’ve tried. This makes it a standout recipe that you’re sure to make more than once.

9. Because Sometimes You Want Fried Chicken
Every once in awhile the fried chicken urge may rise up, and this recipe claims to be able to satisfy the craving without sending you off the Paleo trail. Make your own Old Bay with a mix of seasonings and spices, just use what you already have on hand, like bay leaf, mustard, ginger, nutmeg, cloves, allspice, red pepper flakes, cardamom, black pepper, and celery salt. You definitely don’t want to leave your health in the hands of the largest spice corporation. This mix of spices is sure to set this fried chicken recipe apart from the others.