Learning how to cook Paleo fish recipes gives you a powerful tool in your arsenal and further insures your success. Each of these recipes has been hand-picked for its deliciousness and adherence to Paleo guidelines on which foods to eat and which to avoid. 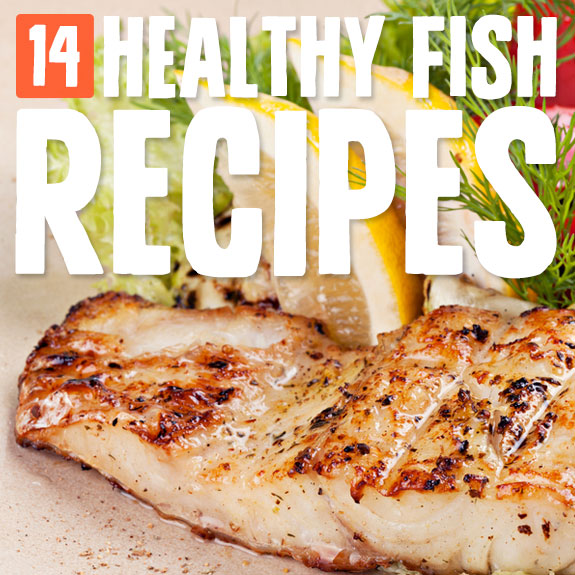 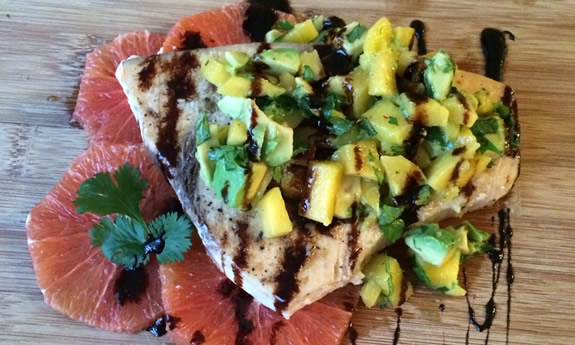 #1. Wild Swordfish and Mango Avocado Salsa
This swordfish dish will surely satisfy, with a nice-sized fillet of wild caught swordfish. On all of these fish dishes it’s important to buy wild caught fish. Farm-raised fish is full of chemicals and is far from what our ancestors would have eaten. The swordfish gets flavor assistance from a sweet mango salsa that includes avocados. Because of the soft texture of both mangos and avocados it dovetails nicely with the feel of the fish and the three go together well. With a blend of seasonings and a splash of lime, you won’t soon forget this fish entree and will likely want it again. 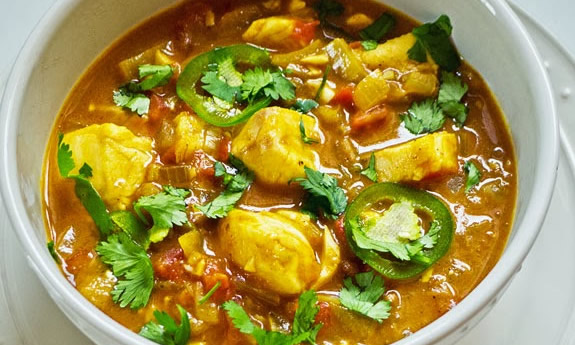 #2. Fish Coconut Curry
The delicious taste of coconut curry helps give this fish a flavor that’s enjoyable, while sticking to the foods that are allowed on Paleo. Coconut oil is used, as well as coconut milk, so you’re getting healthy fat from those and avoiding the use of low-quality oils and dairy. The blend of spices will definitely give you maximum flavor, something you’ll always want to strive for on Paleo, and includes cumin, coriander, turmeric, and cayenne, all of which have health benefits of their own. Garlic and onion are used to put the finishing touches on the taste of this amazing curry. 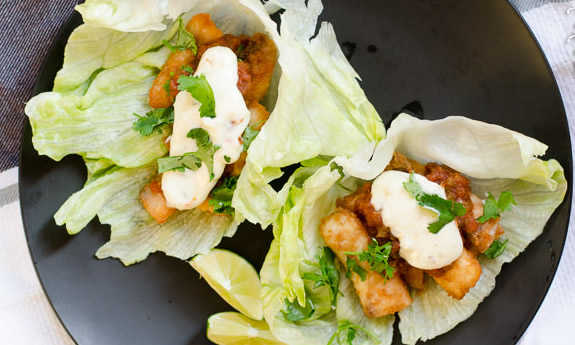 #3. Paleo Fish Tacos
Fish tacos are back on the menu thanks to this creative Paleo fish recipe. Of course the taco shells had to go, since those made from corn or wheat just don’t make the cut on Paleo. Instead of taco shells they have you eating these on pieces of lettuce similar to eating a lettuce wrap. You’ll love the mayo recipe that goes along with these tacos, which shows you how to make a Paleo mayo without any unauthorized ingredients. This mayo can be used on all sorts of things once you have a batch of it whipped up, and will make you feel like you’re not on a diet at all. 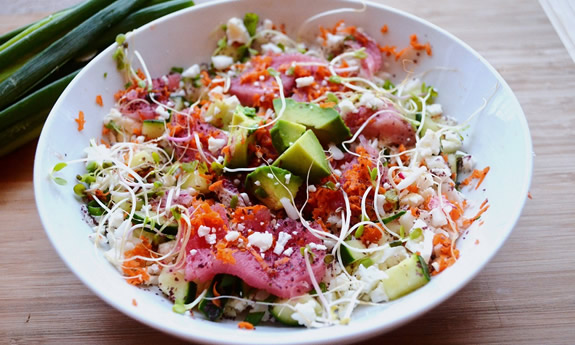 #4. Paleo Sushi Bowl
Sushi is a fun Paleo meal as long as you be sure to take out the regular rice and replace it with cauliflower rice. This sushi bowl does just that, giving you a vegetable serving instead of rice that would otherwise send your blood sugar level soaring. After you finish this meal you’ll feel great, which is the hallmark of any properly prepared Paleo meal. Using seared tuna will have you feeling like you’re eating a fancy restaurant, which is one of the reasons why Paleo is so much fun, it’s the only diet where you can eat food that actually tastes good and is good for you.

Photo: My Little Jar of Spices

#5. Ecuadorian Coconut Fish Stew
When crafting the perfect Paleo stew it’s important to remember not to taint it with anything that isn’t strictly Paleo. That way you can enjoy the stew with no guilt and the security of knowing you’re helping your body. This stew is full of your choice of nourishing fish, and some of the recommendations are to use snapper, grouper, or halibut. You can try one or try them all if you make this stew enough times and decide which you like best. A stew works great for leftovers because it reheats so well. 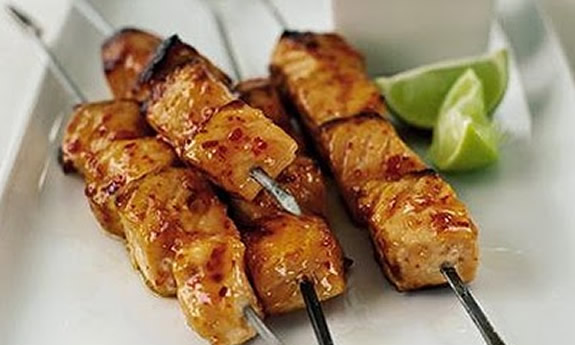 #6. Paleo Thai Food Fish Skewers
These simple skewers will make up half of your meal, but it would be easy enough to add in some vegetable skewers so you can cook your entire meal at once. It may seem like there’s a lot of ingredients used in these, but try your best not to leave any out or you won’t get the full effect. Each ingredient adds its own flavor, and with all of the powerful flavors competing for attention it really does become a contest for your taste buds to savor. For example the sweetness of molasses contrasts with the spiciness of jalapeno. 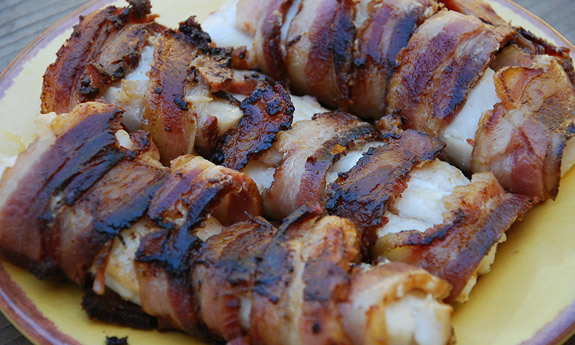 #7. Bacon Wrapped Fish
This fish gets totally encased in bacon so it truly is a Paleo fish dish. The Paleo diet is the only diet we’re aware of that allows for bacon, and it doesn’t have to be a cheat meal or a free day for you to enjoy it. When you wrap the fish in bacon you are making sure that you’re going to get savory flavor in each bite. If you love bacon but aren’t fond of fish, this may be a way to eat more fish. There are only a few simple ingredients added to the fish and bacon, and basically it stands alone as a daring attempt at a Paleo fish recipe. 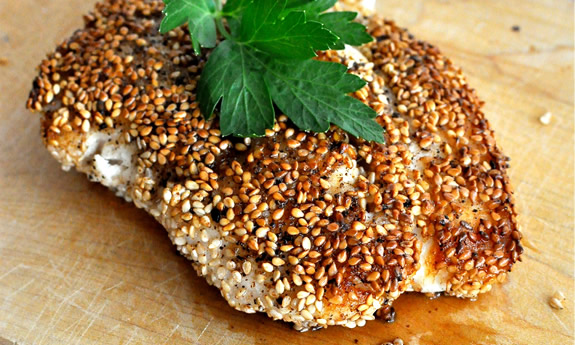 #8. Sesame Seed Crusted Snapper
This snapper gets absolutely covered in sesame seeds, so you’ll have the flavor all the way through. That’s really all there is to it with this recipe, and you’ll just want to make sure that you take the proper steps when preparing it. They say to use butter, but to make it more Paleo you should take them up on their other options of using either ghee or bacon fat to fry it up in. Using bacon fat would give you another layer of flavor, and using ghee would cut out some of the impurities found in butter. 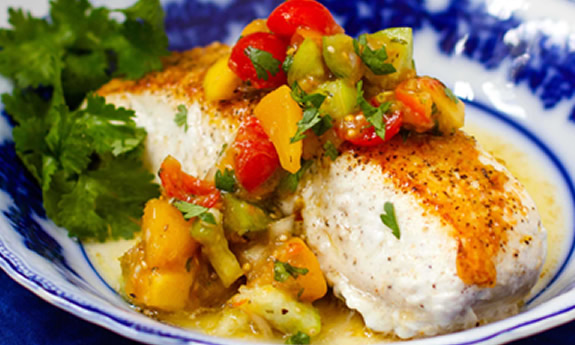 #9. Pan-Fried Halibut with Roasted Tomatillo Peach Salsa
It’s hard to tell which part of this dish steals the show, whether it’s the nice crust on the pan-fried halibut or the delicious salsa made from roasted tomatillos and peaches. Our vote goes to the salsa for using two ingredients that you don’t find paired up very often. The peach lends a sweetness to the salsa that works well with the fish. The tomatillos lend their distinct flavor and give the salsa a different flavor than if you would have used tomatoes like most salsa recipes call for. A great dish to make when you’re looking for a yummy fish recipe. 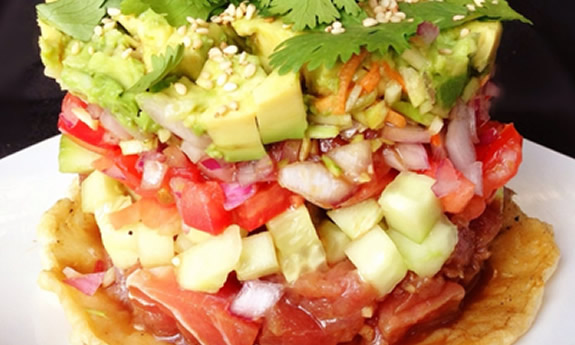 #10. Paleo Ahi Poke Stack
The presentation on this ahi poke stack makes this a dish that you can use to impress your friends or dinner guests even if they’re not following the Paleo diet. The layers make it look a bit like a parfait, but it is loaded up with ahi tuna steaks and is a flavor overload throughout. Even if you’re making this for yourself or for two, it’s nice to take the time to make your food look good so that you’ll have more enjoyment eating it. It really is true that the better your food looks the better it tastes on a psychological level. 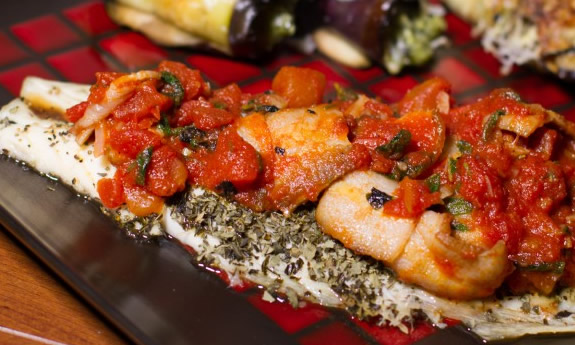 #11. Baked Barramundi with Bacon Sauce
This dish will give you a reason to try barramundi if you haven’t yet. When you’re on Paleo you’ll want to explore all kinds of new taste sensations within the boundaries of the Paleo approved foods list, and barramundi is definitely one fish to put on that list. The bacon sauce she’s come up with for this fish is absolutely sensational, and is something that you’ll find other dishes to put it on, like chicken breast or even a steak. This may not become a regular in your lineup, but you’ll definitely find yourself craving it every once in awhile and you’ll have to specifically buy more barramundi for it. 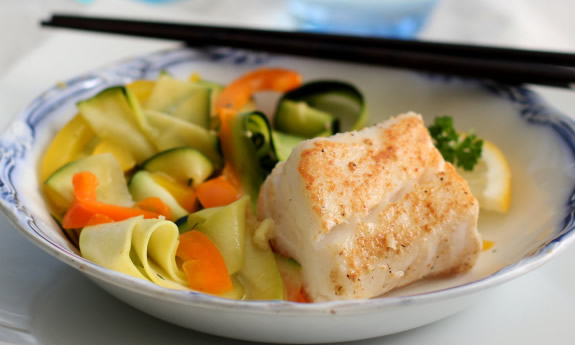 #12. Ginger Cod with Zucchini Ribbon Salad
Ginger is a great spice to use while on Paleo because it will help to cleanse your digestive system. Pairing it up with this salad made from ribboned zucchini will provide you with a vegetable serving that goes nicely with the fish. This is an example of a complete Paleo meal that should leave you feeling satisfied for several hours after your meal. There’s also bell peppers mixed in to give it more color so you’re not just eating fish and zucchini, but getting an additional flavor as well as more vitamins from the peppers. 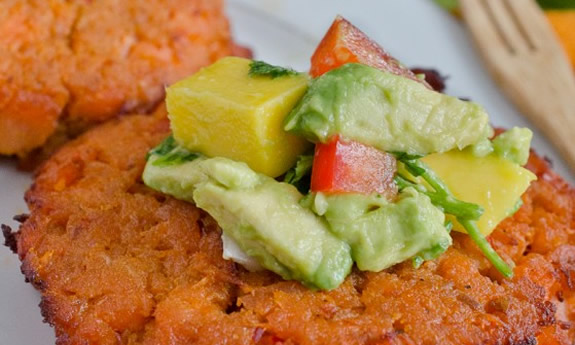 #13. Thai Fish Cakes with Mango Avocado Salsa
These fish cakes feature Thai flavor thanks to curry paste, sriracha, and ginger. Topping them with a mango avocado salsa is a great idea, as we’ve already seen how these two blend well together and have similar textures to each other. Fish cakes are just fun to eat, and if you’re tired of eating your fish in fillet form can be a nice change of pace. If you’re cooking for kids you’ll find that fish cakes go over better than an ordinary piece of fish, especially with a colorful salsa on top of it, but you may want to leave out the sriracha so it won’t be as spicy. 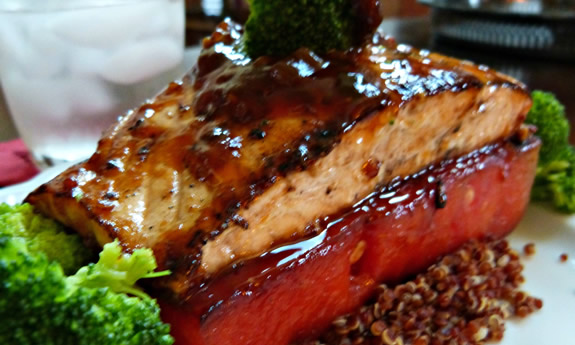 #14. Spicy Sesame Salmon on Seared Watermelon
Here’s a flavor combination that is very creative, and introduces the sweet taste of watermelon to a spiced up salmon fillet. Searing the watermelon is a good way to get rid of excess water, and lock in its flavor, and sriracha and chili sauce are all that’s needed to give the salmon a spicy flavor without losing its natural essence. The watermelon contains lycopene, the same antioxidant found in tomatoes which gives tomatoes their reputation as a healthy food. This means you’re not only getting omega-3 from the salmon, but a powerful antioxidant that can help your body thrive.