Many Mexican dishes can be made Paleo friendly with just a few changes. The biggest offenders are flour or corn tortillas, and refried beans. You may find many gluten-free Mexican recipes that aren’t Paleo because they sub in corn tortillas for flour tortillas. While this may fix the gluten problem, on Paleo corn isn’t allowed so it’s not a Paleo fix. There’s really no replacement option for the beans, so you’ll just need to leave them out, although some recipes get creative and use sweet potatoes, as we’ll see. 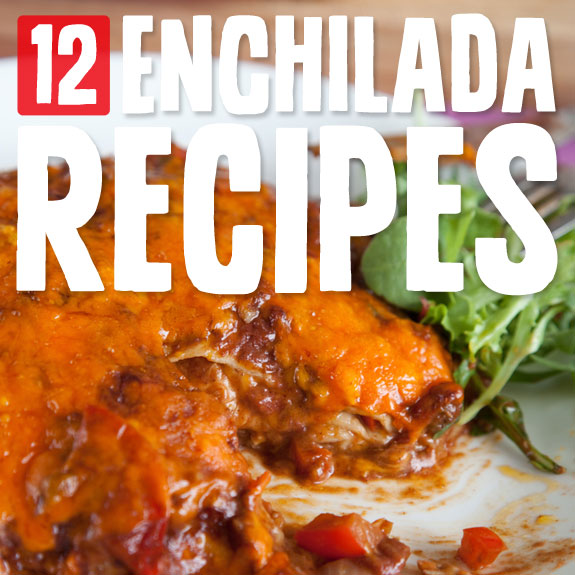 1. Creamy Paleo Chicken Enchiladas Verdes
Let’s start things off with enchiladas verdes, made in the Paleo way substituting sour cream with a special Paleo friendly version made from cashews. If you are new to the Paleo diet, you might be surprised to see a creamy dish on a diet program, as creamy food items are typically shunned when it comes to dieting due to their high fat content. But with Paleo you can have a creamy entree as long as the cream is not from a dairy source. It’s great that they’re topping this with fresh avocado, adding instant fiber and healthy fat to the meal. 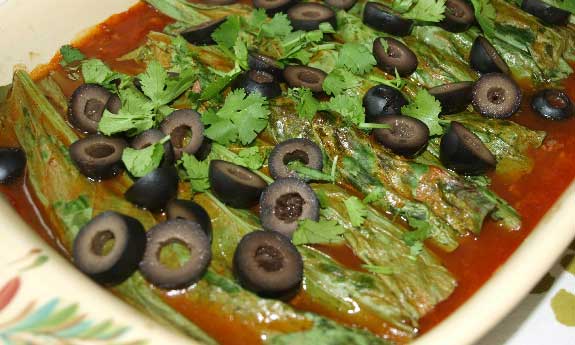 2. Beef Turnip Greens Enchiladas
This enchilada recipe uses plenty of grass-fed ground beef, as well as bacon so you know it is going to be extra flavorful and meaty. They didn’t forget the vegetables though, and they are using turnip greens, as well as onions, and carrots. Black olives give this a distinctive taste, and they have even added some ground chipotle chili for extra flavor. Some of the foods you discover on Paleo are things you probably wouldn’t have considered food before, like turnip greens. So many times turnip greens end up in the trash, rather than being used in a recipe.

3. Green Chicken Enchilada Meatballs
Who says enchiladas need to look like enchiladas? When they say that these are “green chicken enchilada” meatballs they are saying that these are green enchiladas, i.e. enchiladas verde, not that the chicken is green. If your chicken is green please throw it out, don’t cook it. Meatballs made with chicken are a nice change of pace from beef meatballs, although you could use ground beef instead of chicken if you wanted beefy enchilada meatballs instead. The trick to these meatballs is how they get the enchilada taste into them. You’ll be impressed!

4. Beef Tongue Enchiladas
We’re guessing you’ve never tried enchiladas made with beef tongue. Paleolithic man definitely didn’t let anything go to waste when they brought down a beast, and tongue would have been on the menu as its a lean piece of meat with plenty of protein and minerals in it. Not that you need to eat beef tongue to survive in our modern world, but there’s no reason why this shouldn’t be on the menu, along with all of the other cuts of beef. For those that are not so inclined as to try beef tongue, they do mention that you can use any other source of protein, so if you want to try this recipe don’t pass it up just because it has beef tongue as the title ingredient. 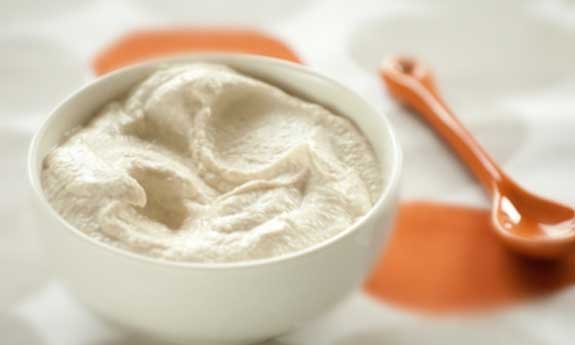 5. Cashew ‘Sour Cream’
Sour cream is the perfect topper for enchiladas, but you can’t have regular sour cream as it’s dairy, and there’s no dairy allowed on Paleo. For years vegans have been using cashews to make creamy concoctions without using any dairy, so take a page from their notebook with this sour cream replacement made from cashews. You’ll have to convince yourself that it’s made from a nut and didn’t come from a tub of sour cream from the fridge.

6. Sweet Potato Enchiladas
Baking sweet potatoes right into your enchiladas is a great way to increase the amount of antioxidants and fiber you’re getting, while providing the right texture and helping to replace tortillas. Notice how she’s using grass-fed ground beef. This can be harder to find and you may need to visit grocery store that carries all-natural foods like this, and you’ll also pay a little more compared to conventional ground beef. It’s worth it. If you can’t taste the difference at least you’ll have peace of mind.

7. Beef Enchilada Stew
This stew is a pretty easy way to make enchiladas without following the traditional enchilada format. With plenty of stew meat and added bacon you’re going to be in meat heaven, and don’t worry because she’s serving this over a bowl of roasted vegetables, making for a complete meal. Making enchiladas into a stew makes the absence of tortillas undetectable, and all your taste buds will know is that you’re eating enchiladas. 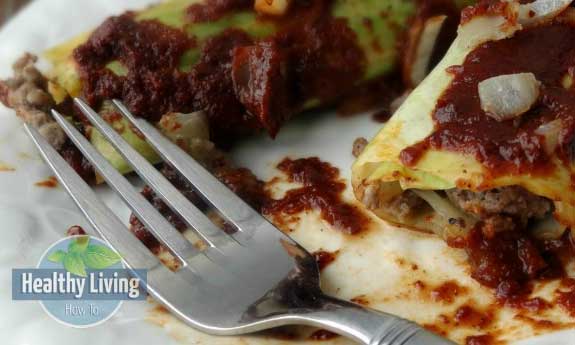 Photo: Healthy Living How To

8. Beef Enchilada Cabbage Rolls
Cabbage takes the place of tortillas in this hybrid creation that is half enchiladas and half cabbage rolls. The cabbage is going to give you way more nutrition than flour tortillas ever could, and you’re getting extra fiber from this cruciferous vegetable that has documented anti-cancer properties. Not that we’re counting carbs but cabbage is also lower in net carbs than flour-based tortillas, and you don’t have to wonder how cabbage was made. The other ingredients here are all Paleo friendly, and bring you the classic enchilada flavor.

9. Chicken Enchiladas
These chicken enchiladas are the closest thing to a traditional enchilada recipe that we could find that’s also Paleo friendly. They make the tortillas for this out of egg whites and coconut milk, a pretty ingenious way to get the grains out while still retaining the look and texture of enchiladas. If you follow Paleo recipes long enough you’ll develop your own instincts for how to replace offending ingredients with ones that are easily digested by your body.

10. Enchilada-Spiced Pulled Chicken
If you love pulled chicken or pulled pork, you’ll love this pulled chicken that is infused with the taste of enchiladas. Follow their serving suggestion by having this as part of an enchilada salad, with the pulled chicken as the highlight, some fresh greens, some avocado, and top it off with a dollop of “sour cream” the recipe for which you’ll find at the bottom of this page. This is more of an outside-the-box enchilada recipe, and takes an open mind, but the payoff is very satisfying. 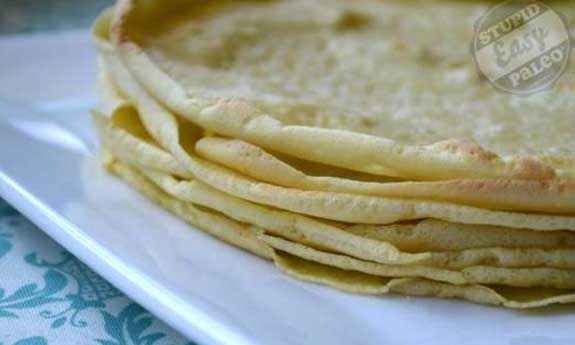 11. Simple Paleo Tortillas
Most Paleo enchilada recipes do their best to get rid of the tortillas, but they are such an integral part of enchiladas that it’s hard to do without them. Why not make up a batch of Paleo friendly tortillas that you can use in place of flour or corn tortillas? Here they’re using arrowroot powder and coconut flour to take the place of wheat flour, which replicates the texture and taste pretty closely, and keeps you well within the bounds of the Paleo diet.

12. Paleo Enchilada Sauce
Enchilada sauce seems pretty harmless, until you see what goes in it. Take Emeril Lagasse’s recipe, which would be fine if it weren’t for the 3 tablespoons of vegetable oil and one tablespoon of flour. Yuck! Vegetable oil is not a Paleo oil, and flour gets the ax, so you’re not left with much once you take those out. Luckily we have this recipe for Paleo enchilada sauce to rescue us, and provide all of the classic enchilada flavor you’re looking for.