Eggplants are a very versatile vegetable that you can use in your Paleo cooking in a number of ways. Since you’re shooting for a rough ratio of equal parts vegetables and meat, knowing how to prepare a decent vegetable dish is an important skill for a Paleo eater. The common misperception that Paleo is all about the meat is something you’ll have to work on if you’re not used to eating so many vegetables. Eggplant can be your new sidekick, since it’s pretty easy to work with with a large margin of error. 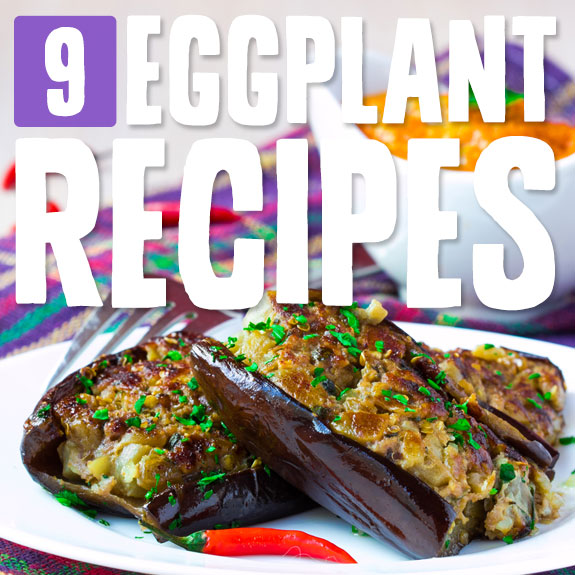 Roasting eggplant is one way to make sure that it comes out tasting great. In this eggplant recipe you’ll be using only Paleo friendly ingredients so that you know is a healthy dish. Garlic chili is sure to give the eggplant plenty of extra flavor. Eggplant is one of those vegetables that doesn’t have a strong taste of its own, so it quickly takes on the taste of whatever you cook with it, making it a delicious addition to your main dish. The single most greatest attribute of this recipe is that it’s easy to make, even though it looks great when it’s finished. You can whip it up as an impromptu side dish. 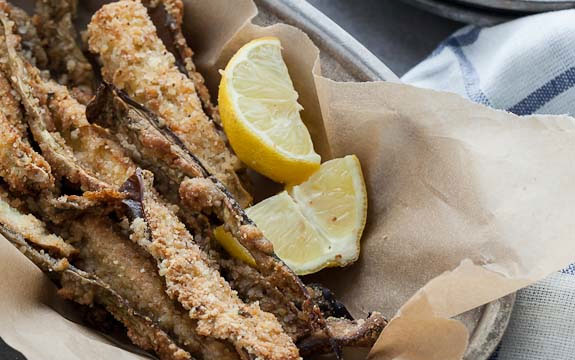 Photo: Gourmande in the Kitchen

French fried potatoes are not allowed on Paleo, but there are plenty of ways to fill the void, either with sweet potato fries or these eggplant fries. They’re baked, so you’ll be avoiding a lot of the oil that’s in deep fried French fries. And the eggplant gives you a serving of vegetables, making these fries perfect as a side dish for a wide assortment of meaty main dishes. The part we like best is that they’ve given them a crispy coating using two types of flour, so it’s not as if they just sliced up some eggplant and called it fries, they’re really trying to make these satisfying. Paleo isn’t about making lame reenactments of the things you can’t have, it’s about using what you can have in the best way possible so you don’t even miss the other stuff.

The name says everything on this eggplant dish, which basically just consists of sliced eggplant with a nice marinara sauce on it. They’re serving this along with what they’re calling Mediterranean meatballs, so together this makes a complete Paleo meal. You don’t have to make the meatballs if you already have a meat dish in mind. Eggplant can supplement just about any other item, like chicken, pork, and beef. And the marinara sauce they’re using comes from a jar, so if you go this route be sure to go organic and check the ingredients to make sure that they all conform to the Paleo methodology.

In regards to texture this eggplant jerky is very similar to beef jerky. Not that you can’t have beef jerky on Paleo, but sometimes you’ll find that you need to up your vegetable intake and a veggie snack can be very helpful. She includes two different ways of making this, one is using the oven and the other is using a dehydrator, which is nice if you don’t have a food dehydrator you can simply follow the oven instructions. Either way you’ll get a jerky that almost has a cooked bacon consistency to it once it’s finished. 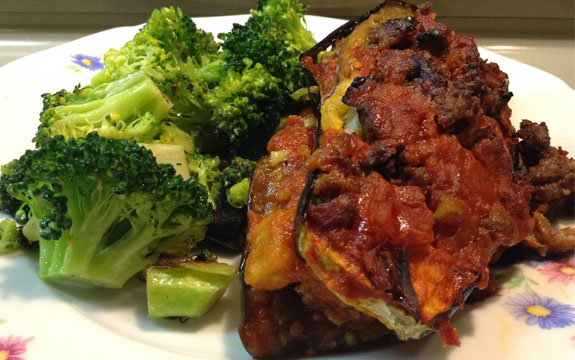 In this recipe the eggplant gets stuffed with a beefy, tomatoey, oniony mix that you’re sure to want again after you have it once. It has a nice blend of supplemental ingredients including garlic, parsley and chiles. This is going to be a bit on the spicy side, as it’s Turkish-inspired, and the great part is that it’s a nice mix of vegetables and meat so you don’t have to worry about making a separate side dish. The eggplant serves as a nice edible container for everything else, and is a nice way to serve it up. Very posh looking, and the taste is sure to be a crowd pleaser if you have a bigger group to feed.

This dip is great for game day snacking or anytime you need a little assistance to get to your next meal. An entire large eggplant has found its way into this dip, and you’ll definitely notice its taste along with the other ingredients. It reads a bit like a salsa ran into a pesto with items like basil, olive oil, red peppers, and garlic. What holds it all together and gives it some substance is the eggplant, and this is the first time we’ve seen eggplant used as an agent of dipping nirvana. To add even more veggies to your day you can use them as dipping utensils for this one. 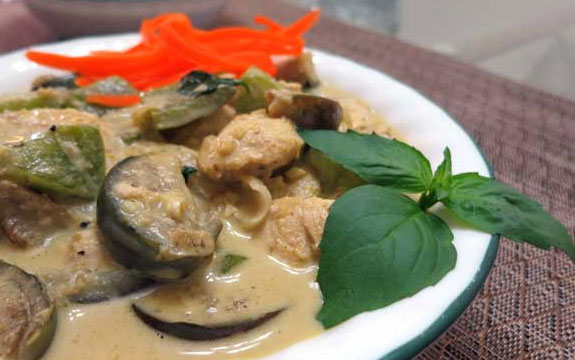 This curry is very similar to the kinds you’ll find in Thailand, and eggplant is a great vegetable to use because it soaks up all of the delicious curry flavor so it bursts in your mouth. In Thailand two types of curries dominate, the red and the green. Both can be spicy or mild and each has their different set of ingredients and distinct tastes. This is a great curry recipe for a Paleo eater because it is well rounded with plenty of chicken and an assortment of vegetables with eggplant being the standout.

Not that cavemen were lazy, but they sure didn’t fuss over their meals the way we modern humans do. This is a fun one-skillet meal that you can serve up in the pan and makes a great presentation. It’s lazy because you’re basically slicing up eggplant and topping it with a variety of ingredients which includes lamb. Lamb is a tasty meat to get familiar with on Paleo, and is eaten more often in certain parts of the world than others, but often gets overlooked in the American market. Right that wrong and try this tasty dish tonight!