This rich and hearty bolognese sauce easily makes a delicious, comforting meal. It’s a lighter bolognese, made with a mix of eggplant and ground beef, which is still sure to please the crowd. Serve the thick, savory sauce over a plate of zucchini pasta for a dish worthy of any special occasion. 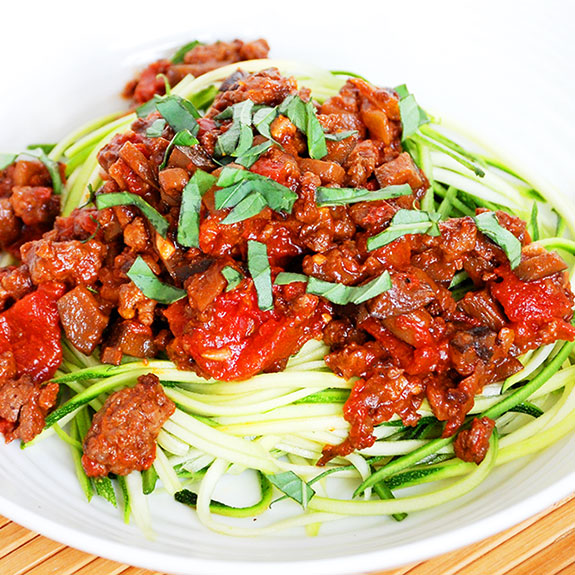 A traditional recipe for bolognese relies heavily on meat as the center of the dish. But for those of you who are vegetarians, or would like to change things up, this recipe substitutes eggplant for half of the meat to make some healthy comfort food. You could easily make the recipe vegetarian by completely swapping the ground beef out for more eggplant. As a meat eater, I like this version because it’s a little lighter and at the same time adds another serving of vegetables into my diet.

Other than the eggplant, the recipe doesn’t veer too far from usual bolognese sauce. Bolognese is already based on mostly Paleo-friendly ingredients. The onion and ground beef are sautéed together first, and then the eggplant and garlic are added into the pan. This is a dish that shouldn’t be rushed; instead cook it long and slow. A little red wine is added to the pan to deglaze and bring more flavor to the sauce. Lastly, whole plum tomatoes are stirred into the mixture and everything is left to simmer for about 10 minutes. If you don’t eat it all right away, the sauce can be frozen to enjoy later. 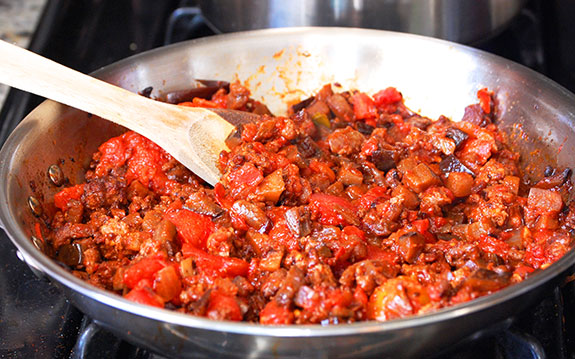 I usually serve the bolognese over zucchini pasta, instead of the traditional pasta noodles. I prefer zucchini mainly because it is so easy to prepare. Zucchini pasta is popular on the Paleo diet because it is consistently delicious and takes minutes to make. The bolognese would also taste good over spaghetti squash noodles, though they take longer to cook. This recipe is proof that a dish based on ‘pasta’ can still be good for you. 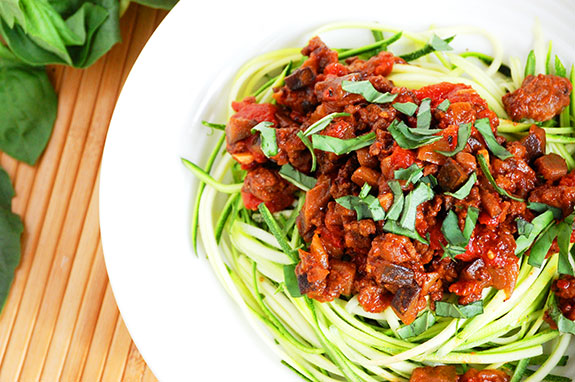