Donuts are such a beloved treat with such a specific shape and texture that you’d think it would be difficult to make good ones without grains, dairy, or refined sugar. Think again! These paleo donut recipes are healthier for your body and if you look at the pictures and some of the flavors you can make, I think you’ll be impressive at the variety. Give some of these absolutely delicious donuts a try.

1. Baked Lemon Donuts With Blackberry Glaze
Lemon and blackberry flavors scream “summer” to me, so these bright and cheerful donuts are sure to brighten up any season. They’re made from an almond flour base so they’re high in protein and super delicious, and they have a yummy purple glaze made from fresh blackberries. 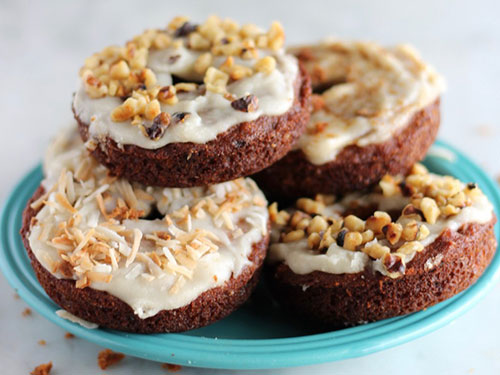 3. Coconut Flour Chocolate Glazed Donuts
If a classic chocolate donut is what you’re after, try this recipe. Coconut flour and cacao powder form the base, which is sweetened with maple syrup and coconut sugar, and bound with a flax egg and healthy pumpkin puree. The “frosting” is just melted chocolate chips!

4. Paleo Lemon Poppyseed Glazed Donuts
These high protein lemon poppyseed donuts have a fresh and light flavor for their almond four base, with fresh squeezed lemon juice and organic almond extract. Don’t forget the poppyseeds and the light maple-sweetened lemon and almond glaze!

5. AIP Banana Bread Donuts
On the AIP diet while you get yourself feeling better? No problem. These AIP-safe donuts are made with green-tipped bananas, coconut cream, vanilla, and coconut flour. They have a lovely cinnamon spice and a simple coconut milk and vanilla frosting. 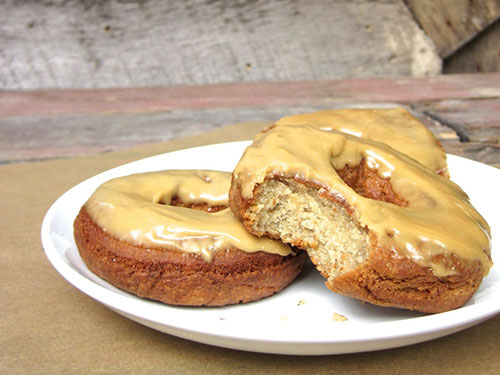 6. Maple Glazed Donuts
Made with melted lard or coconut oil along with coconut and almond flours, these banana-and-maple-butter donuts have a sweet vanilla flavor, simple ingredients, and plenty of healthy fats. They’re sweetened with a little bit of honey and can be sprinkled with toppings of your choice.

7. Jelly Donut Mug Cake
I know this isn’t exactly a donut itself, but it sure tastes like one, so I’m happy to share it with you. This easy jelly donut mug cake has an almond flour base, a vanilla flavor, and a simple mashed strawberry filling sweetened with maple syrup. Top with cinnamon and coconut sugar!

8. Paleo Gingersnap Mini Donuts
With flavors like cinnamon, ginger, cloves, and blackstrap molasses, these donuts will remind you of grandma’s ginger snap cookies—but they’re much healthier, with only a little bit of raw honey as the sweetened and no grains to speak of. Just coconut and cassava flours!

9. Paleo Pumpkin Spice Donuts With Maple Frosting
Perfect for fall, these pumpkin donuts are made with lots of pumpkin puree as well as blanched almond flour and coconut sugar as the sweetener. Vanilla helps to deepen the flavor and the maple cashew frosting is, literally, the icing on the donut. 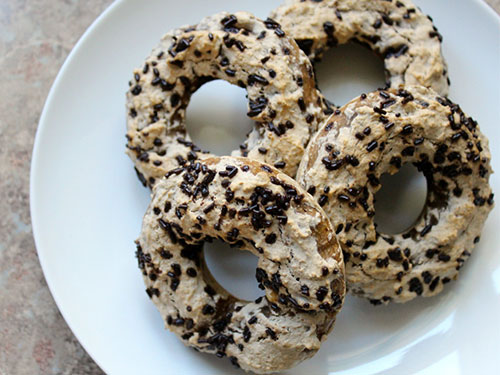 10. Gingerbread Donuts
Here’s another easy gingerbread donut recipe, and this one is made with a yellow plantain and arrowroot starch as the base. The donuts have a lovely cinnamon vanilla gingerbread flavor and if you can find paleo sprinkles, definitely use them!

11. Sweet Potato Pie Mini Protein Donuts
These donuts are made with sweet potatoes protein powder for a protein-rich treat, but they’re light on the sugar with just two tablespoons of maple syrup in the base and a touch more in the white chocolate frosting, which is made with cacao butter and vanilla. Do you have you drooling yet?

12. Grain Free Baked Cinnamon Donuts
These are the simplest donuts you’ll ever made, with an almond flour base and a little honey to sweeten them up. Turn them into delicious cinnamon muffins with melted butter or ghee, coconut sugar, and ground cinnamon. So delicious and so easy. 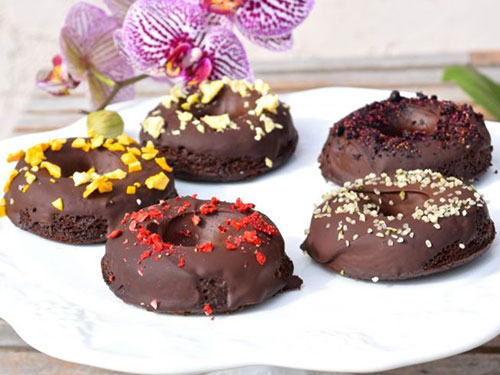 14. Paleo Chocolate Sweet Potato Donuts
The sweet potato in these donuts gives them an earthy flavor that’s complements by raw honey, vanilla, cinnamon, and unsweetened cocoa powder. They’re glazed with melted chocolate and finished with an assortment of toppings like freeze dried fruits and hemp seeds.

15. Plantain Donuts With Protein Frosting
These cinnamon plantain donuts have similar ingredients to the last recipe, but with a simpler flavor and a delicious protein powder frosting. You’ll want to use paleo-friendly protein powder with a nice flavor. If you opt out of stevia, use coconut sugar instead!

17. Healthy Bananas Foster Donuts
Bananas Foster is a favorite dessert of mine, so I’m pretty excited about these inspired donuts made with almond flour, vanilla, lots of bananas, almond butter, and delicious coconut sugar, which tastes an awful lot like the classic brown sugar flavor of Bananas Foster. 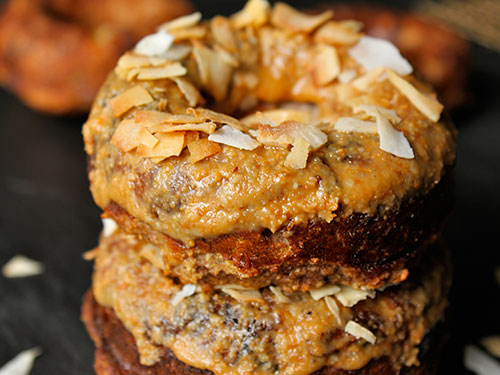 18. Toasted Coconut Banana Bread Donuts
These super easy donuts are fluffy and sweet, and they’re nut-free, which makes them a great alternative to some of the other recipes if you’re allergic to nuts. You’ll need dates, stevia, eggs, banana, shredded coconut flakes and coconut flour, vanilla, and cinnamon.

19. Baked Beignets
Ever had a beignet? These are French donuts that are puffy on the inside, lightly crispy on the outside, and gently sweet. They’re traditionally fried, but this version is baked, and there’s no sweetener in the batter—just drizzle with honey or dust with coconut powdered sugar after baking.

20. Chocolate Cinnamon Donuts
I love the sweet-and-spicy combination of chocolate and cinnamon in these donuts, which have both a cinnamon sugar dusting and a dark chocolate glaze made with chocolate chips and coconut cream. The base is almond, tapioca, and coconut flours, which you probably already have!

21. Apple Cider Donuts
Apple cider donuts conjure fond childhood memories for me, and I can still taste the ones we used to buy fresh from a local orchard. This version is close, but healthier anyway with coconut flour, cinnamon, coconut oil, a little honey, warm apple cider, and a simple coating with ghee, coconut sugar, and cinnamon. 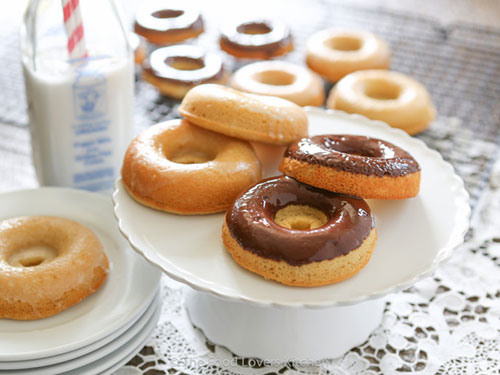 22. Grain Free Donuts
This grain free donut base can be customized however you like, and there are even two topping suggestions included in the recipe—chocolate ganache, and lemon glaze. I highly recommend doing the batch half and half so you don’t have to pick a favorite.

24. Apple Butter Donuts
To continue with our apple theme, these recipe is made with gooey, sweet apple butter along with arrowroot starch, potato starch, and coconut flour. Apple butter is the only sweetened these donuts need, and they’re flavored with vanilla, cinnamon, nutmeg, and clove.

25. Pumpkin Spice Donut Holes With Pecan Crunch
These donuts holes are to die for. They have a sweet pumpkin spice flavor sweetened with dates and vanilla extract, and they’re covered in a glaze made from creamed cashews, coconut cream, and maple syrup. If that’s not enough, they’re then sprinkled with a sweet pecan crunch topping. 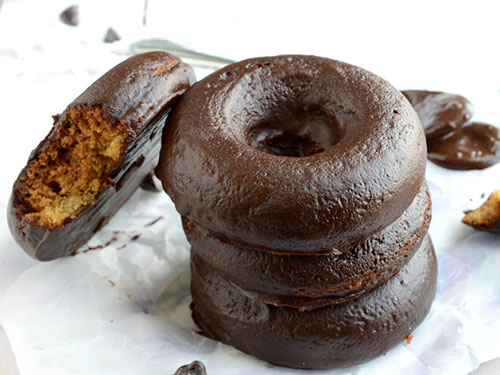 26. Chocolate Covered Donuts
I have memories of one of my parents stopping at a convenience store in the morning on the way to work and school, and my sister and I each would get a chocolate covered donut like this one. Not the healthiest breakfast! But you can make your own healthier version you don’t have to feel guilty about.

27. Triple Coconut Donuts
Got a coconut fan in your house? Try these simple triple coconut donuts made with applesauce, maple syrup, coconut milk, coconut and almond flours, a maple-vanilla-cashew glaze, and toasted shredded coconut as the beautiful topping.

28. Chocolate Donuts
If you don’t have a good stock of flours in your pantry, or you just want to keep the recipe simple, try these chocolate donuts made with no flour at all—just a green plantain for the base. You’ll also need butter, vanilla, chocolate, and eggs. I love the easy buttery chocolate glaze!

29. Paleo Glazed Donuts
Glazed with a mixture of almond butter, maple syrup, coconut milk, and vanilla extract, these donuts are sprinkled with chopped almonds and made with a coconut flour and egg base. They’re rich in protein, but with cinnamon and maple syrup, they have a lovely sweet flavor. 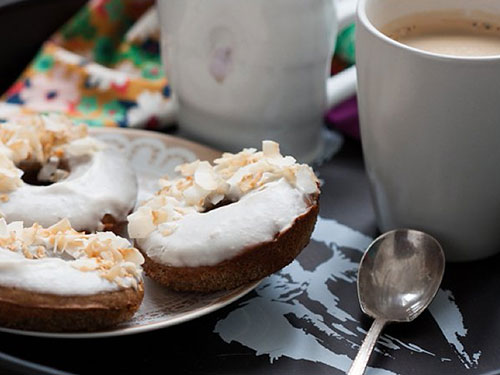 30. Baked Coconut Cream Donuts With Coconut Cream Glaze
I love these double coconut donuts made from almond and coconut flours—you can even make them vegan using chia or flax eggs! The vanilla flavor and the silky vanilla coconut cream glaze is the perfect combination of creamy and tropically fresh.

32. Chocolate Donuts With Fudgy Date Frosting
I’m all about simple recipes with only a handful of ingredients. After all, who wants to gather ten thousand things when all you want is a donut? This recipe is simple with coconut flour as the only flour, and a delicious fudgy frosting made from dates, cocoa, and coconut oil.

33. Gingerbread Protein Donuts With Chocolate Maple Glaze
The protein donut phenomenon is pretty cool, because it turns gently-sweetened donuts into the ultimate post-workout treat to replenish your protein stores and get those muscles healing. This version is moist with applesauce and spiced with cinnamon, ginger, and more. 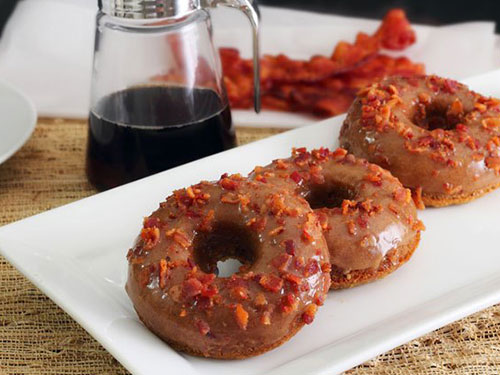 34. Paleo Maple Bacon Donuts
You had to know there’d be a bacon donut on this list, didn’t you? Of course! This one is made with almond flour and sweetened with maple syrup, which complements the salty-savory flavor of bacon so well. The glaze is absolutely delicious.

35. Chocolate Donuts With Coconut Vanilla Bean Icing
There’s something about a gorgeous vanilla bean frosting that just gets me. I’m about ready to run to my kitchen to make these simple, almond flour-based donuts with their coconut butter, honey-sweetened vanilla frosting and eat them all in one sitting.