After seeing it in so many Paleo recipes you may be wondering “Is coconut oil good for you?” Depending on who you ask, coconut oil is either a godsend or something you should only use in limited quantities because it’s bad for you. We wanted to get to the bottom of this and provide the right answer for a Paleo eater so you can finally know whether or not to include coconut oil in your regular cooking. 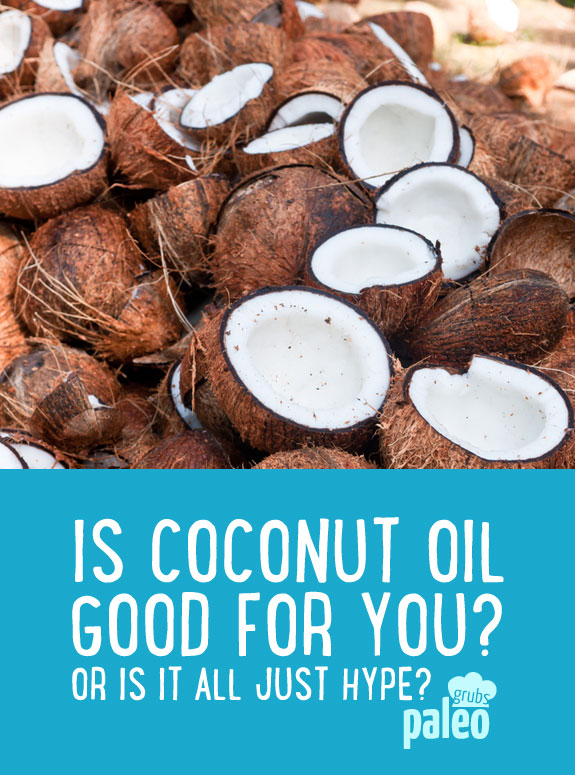 On the surface, coconut oil looks like the worst thing you can eat, being over 90% saturated fat. It has more saturated fat, ounce for ounce, than any other oil you’ll find. What we found though is that there’s more to the story than this.

Foods like apples and spinach are widely accepted as good for you, and very little argument is ever made as to how these benefit the body. But coconut oil has the distinction of opposing sides, one saying it’s great, and one saying that it’s awful. With so much contradictory information out there it can be hard to know what to make of it. On the one hand, how can a naturally-based oil be bad for you, and on the other hand how can so much saturated fat possibly be good for you?

For Paleo followers the question is doubly important, as coconut oil is an approved oil and is found in a lot of Paleo recipes for baking as well as main dishes. Several Paleo gurus have lauded its healthy benefits and pointed to its saturated fatty acids as being its biggest benefit. But should we blindly follow their advice? What is science saying about coconut oil and what is the answer to the basic question of should I be eating this stuff?

This isn’t a black and white answer because there are so many different variations as to what is considered healthy and “good for you”. But the main reason is because coconut oil was identified as being horribly high in saturated fat at a time when everyone was very fat conscious, and looking for the worst offenders. The reason it’s made a comeback in health food circles is that this vilification was undue, and as it turns out coconut oil has several healthy benefits. Proponents of coconut oil say that rather than being written off for its saturated fat content, it should be used for what it can do for the body.

Back when fat-free and low-fat diets were all the rage, no distinction was given as to the type of fat, it was all bad and anything high in fat was deemed the enemy. Avocados may be a fruit, but be careful because they’re high in fat. Macadamia nuts may have some healthy benefits, but don’t eat them because they’re far too high in fat. Only in recent years has a lot of light been shed on the different types of fat there are, and the term “healthy fat” has come into common usage, something you didn’t hear just ten years ago.

Coconut oil is mostly saturated fat, with some monounsaturated and polyunsaturated fat as well. Overall it is 100% fat, and the reason it is used in many baking recipes is because it’s solid at room temperature, and can be used instead of things like lard and butter, providing the same qualities but without using animal byproducts. Healthy fats play a big part in Paleo, and you’re recommended to eat nuts and seeds and use oils that provide these fats on a daily basis. This is in stark contrast to many diet plans that have you counting fat grams and limiting your fat intake for the sake of weight loss and fat loss.

Coconut oil is an approved Paleo oil and is found in many Paleo recipes, especially dessert recipes. If you are using organic virgin coconut oil you are getting an oil that has undergone far less processing than many of the oils available on the market. If you’ve been doing Paleo for any amount of time you’ve likely noticed that it shows up again and again as a preferred oil in cooking and baking.

Paleo is all about going against conventional wisdom. Many of the same health experts and nutritionists that say to avoid coconut oil also say you should be getting your daily intake of grains and dairy, and limit the amount of nuts and seeds. They still defend the food pyramid produced and promoted by the USDA. But the Paleo philosophy pretty much disregards this type of thinking and does away with dairy and grains as largely unnecessary and even detrimental to our health.

The same goes for a product like coconut oil. The obvious answer is that it is preferable to all of the man made oils, especially those that have been hydrogenated, or that are high oleic. Always dial the clock back as far as you can and choose oils that are the least tinkered with.