Every bit of my clam chowder recipe will have you thinking that you are in a quaint New England restaurant. Just another reminder that you don't have to sacrifice flavor in order to eat healthy food that is supporting your well-being. 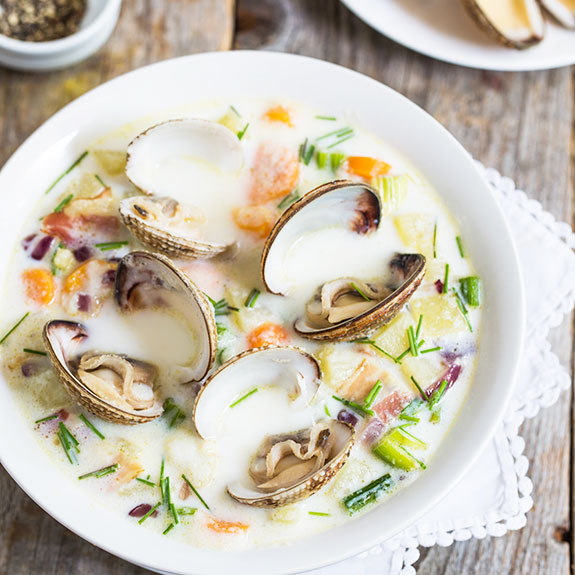 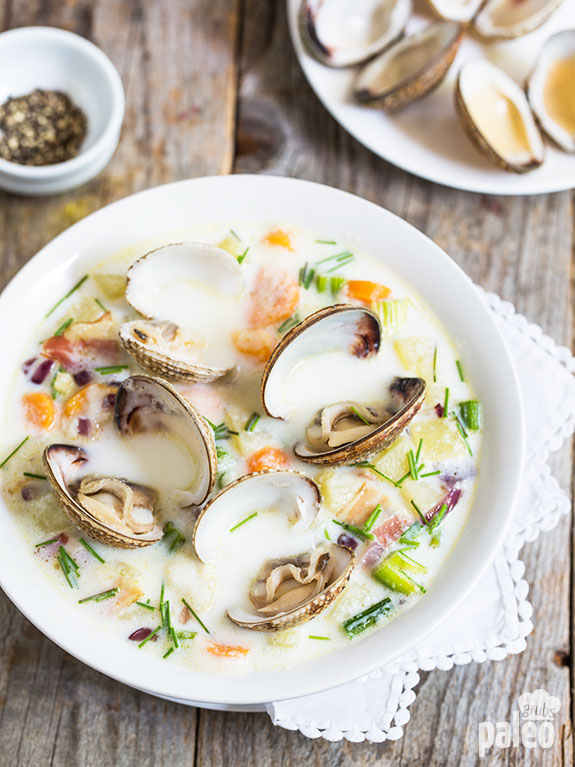 That’s how you can sum up a yummy clam chowder. But the problem with using a traditional recipe is all of the junk that will muck up your system shortly after you eat it. Loads of butter, heavy cream, white potatoes, and all-purpose flour to thicken it up. Might taste good, but not good for you. 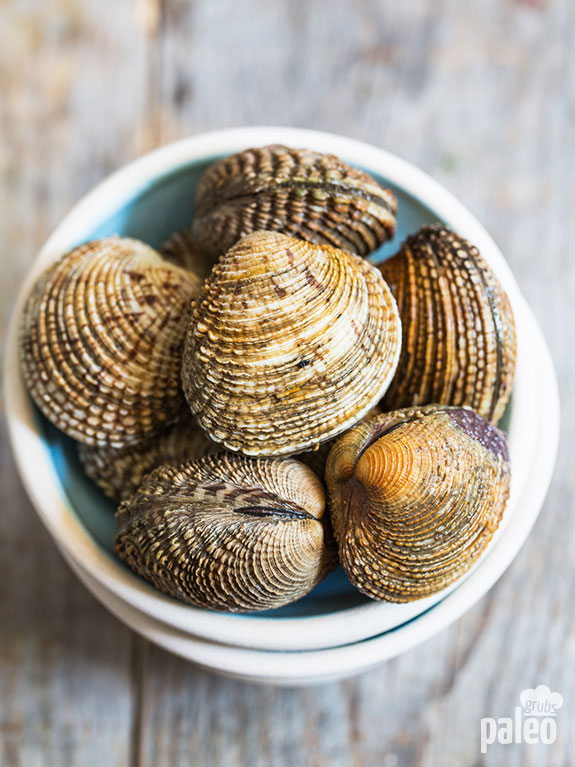 Essentially it needs an overhaul from the ground up when you compare it to a traditional recipe. Of course the clams are ok, and any vegetables that you want to put in it as well, but a traditional recipe uses a thick creamy base that have to be retooled in order to serve our purposes here. 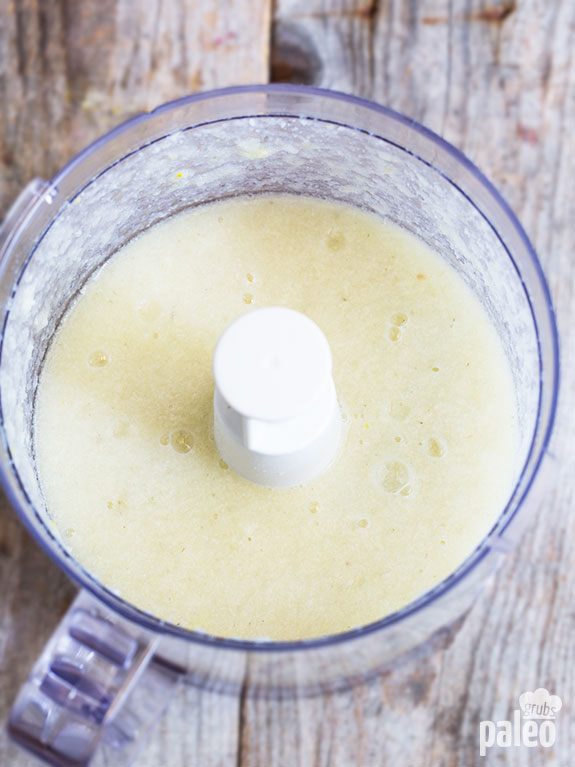 Clam chowder is one of those soups that I don’t have too often, but when I do I really enjoy it and it was one of the soups I knew I had to perfect if I was going to go with Paleo for the long term. 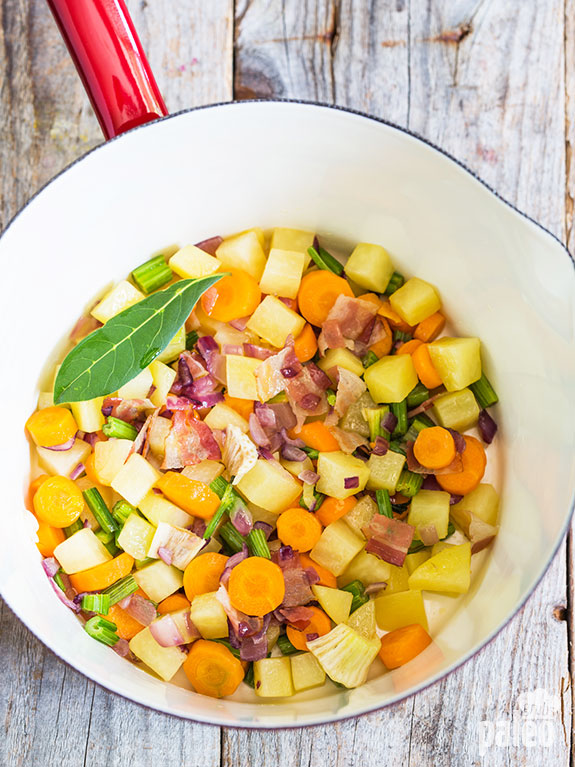 To start this off I go with plenty of fresh clams. The fresher you can get your clams the better. It really does make all the difference in the world and is a much better option than trying to use canned clams.

To make this chowder as irresistible as possible let’s up the ante and use a good portion of bacon in order to give it a savory undertone and to add in an additional texture to keep your mouth interested. 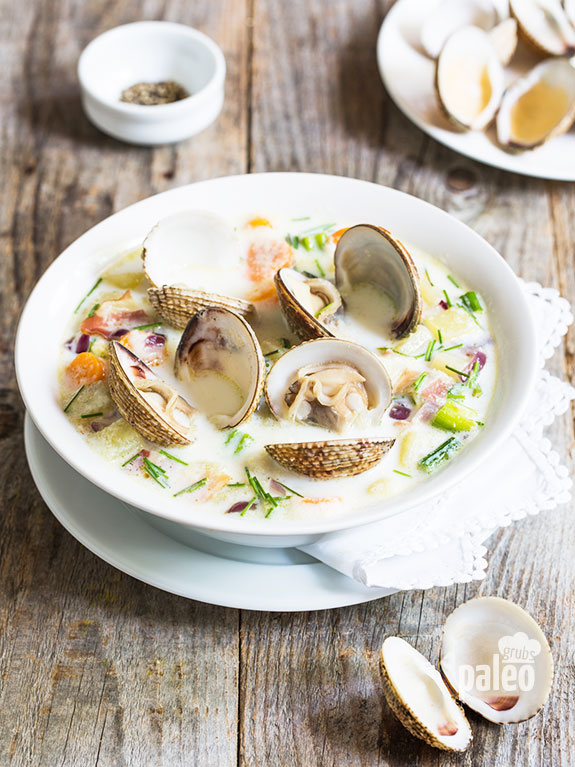 For the vegetables I like to keep things pretty traditional and use some onions, carrots, and celery. The secret ingredient to this recipe is all of the cauliflower that is being used. It’s what gives the chowder its creaminess as well as its thickness without using any cream or dairy. The cool part is you’re getting a big serving of cruciferous vegetables built right into the soup, but it looks, smells, and tastes like a traditional New England clam chowder recipe.

One vegetable that I’ve added in that you generally won’t find in a clam chowder recipe is turnips. Eating Paleo definitely involves trying new things, and expanding your horizons in the vegetable department. Turnips were not something I used to eat but now they make it into my shopping cart on a regular basis. They’re very versatile and nutritious and are perfect for stews like this that are best eaten in cold winter months. 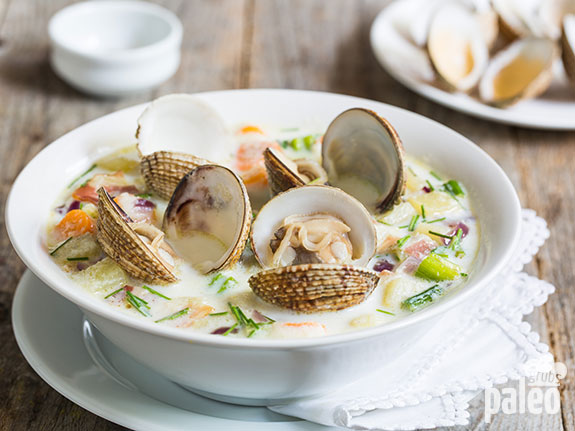 So dig in! This is one chowder you can eat with a fork, but a spoon works way better.