Chicken soup can be one of your best friends on Paleo because it can come in handy as a light meal, or it can be used as starter to a larger meal. Because it’s so easy to make a Paleo friendly chicken soup you can feel like you’re eating regular food, which helps the brain feel like it’s not being forced into giving anything up. Use these chicken soup recipes whenever you feel the need to be nourished, and to get a taste of good old home cooking if you’ve been feeling restricted, or like you’re “on a diet”. 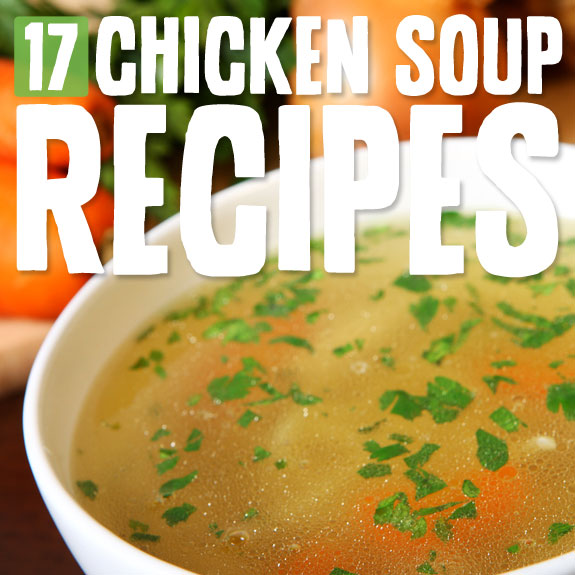 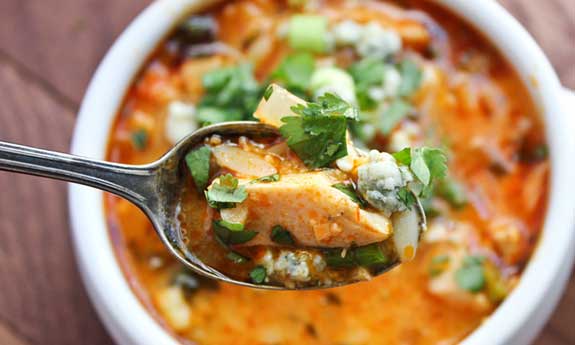 1. Paleo Buffalo Chicken Soup
You don’t have to give up chicken wings while on Paleo, but if you want the taste of buffalo wings without having to make up a batch of wings, this is the way to go. It captures the essence of a plateful of spicy wings and puts it in soup form, without violating any of the Paleo food guidelines. You’ll be surprised that they managed to sneak an entire head of cauliflower into this awesome soup. All of the other ingredients pass the Paleo test, but watch out, this soup comes with a kick thanks to the hot sauce.

2. Paleo Chicken Tortilla Soup
Chicken tortilla soup is a cash cow at many restaurants, but you won’t want to order it if you see it while dining out. That’s because it’s most likely loaded with ingredients you’re not supposed to have. You can make this version at home yourself and know that you’re only getting the good stuff. The taste will be the same, but you’ll be feasting on premium ingredients like chicken breast, preferably organic, as well as onions, jalapenos, cilantro, celery, and carrots. No strips of tortilla chips on the top like they have in the restaurants, a small price to pay for your health and wellbeing.

3. Chicken Vegetable Soup
The real beauty of chicken soup, and why it fits so well into a Paleo diet, is that it allows you to serve up pretty equal parts of meat and vegetables, which is one component of the Paleo plan. In this case they are adding onions, carrots, zucchini, squash, and mushrooms to a nice portion of chicken so in each bite you should have chicken as well as some sort of vegetable. Paleo is about getting a mix of meat and vegetables for good digestion and plenty of nourishment. This recipe also does a good job of adding in different spices, which helps to give it a nice flavor to keep you happy while you eat it.

4. Chicken & Veggie Soup for One
What happens when you’re by yourself and just want soup for one instead of making a big batch? Generally you’ll have to suffer through making a big batch and waiting for it to heat up just so you can save most of it for later. But in this recipe they’ve sized everything up for one person, so you can make it quicker, and get to the eating part quicker, with no leftovers to deal with. You’re still getting a big bowl so you’re going to feel satisfied, and this makes a great lunchtime option that is just as much veggie as it is chicken soup.

5. Paleo Chicken Soup
Chicken soup doesn’t need too much doctoring to it to make it Paleo friendly, as long as you nix the noodles. This recipe is one that we like because it is made in the slow cooker, so you can let that do all of the heavy lifting while you go do other things. When it’s ready you come back to a nice hot meal. This is the sort of soup that you’ll need to plan ahead for, since they’re asking you to cook it for 8-10 hours, and then cook it a bit more once it’s nearly time to eat. This makes it great for getting going in the morning so you have little to do when you get home and you’re already hungry. 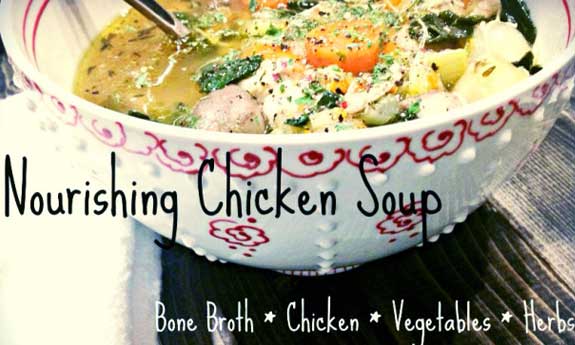 6. Nourishing Chicken Soup
This is the sort of soup that you’ll love to make when you want something that is going to make you feel good all over, but don’t want to spend a lot of time preparing it or watching the stove. You basically add different vegetables to some quality chicken, and they’re using a homemade chicken broth recipe so you really can have control over everything that goes in. This is the sort of recipe that you can prepare well ahead of time when you know that you are going to be short on time. Being prepared is important because you are more likely to go off track if you get super hungry and there’s nothing ready to eat.

7. Creamy Chicken Soup
This creamy creation is sure to satisfy, and it doesn’t use any dairy or other items you’re not supposed to be eating on Paleo. The creamy consistency is thanks to the cauliflower, and the step that has you blending everything up. This will give you a nice smooth base, and when you add it to the chicken you get a creamy soup without the cream. Pretty nifty! The thing we like most about this is that they’ve decided to garnish it with avocado, one fruit that you should be getting plenty of on Paleo thanks to its fiber, fat, and mineral content.

8. Grandy Kyp’s Chicken Soup
This is a chicken soup that your grandma could have made, and is actually derived from their actual grandmother. It’s a rather simple soup, but don’t let that fool you into thinking that it doesn’t have the right flavor. Each ingredient seems like it was selected because it brings something to the table, either the right flavor, texture, or extra nutrition. You’ll find boneless skinless chicken breast, and we suggest going organic in this regard, along with onions, celery, and carrots, which pretty much is your basic chicken soup recipe.

9. Fast and Easy Chicken Soup
When you need a quick batch of soup made up and you don’t want to resort to eating out of a can or a box, you’ll want to go with this recipe. It promises that it will be fast and easy, and the directions state that it takes 25 minutes from start to finish. The great part is that even though it’s fast, and presumably easy, it doesn’t hold back on the ingredients, using items like parsley, tarragon, thyme, and bay leaves for a very dynamic flavor. It also uses an assortment of vegetables along with plenty of chicken so this is going to be a crowd pleaser for sure.

10. Thai Chicken-Pumpkin Soup
One way to make sure that you don’t get bored with the same flavors over and over again is to sample cuisine from other countries. This chicken-pumpkin soup is Thai-inspired and includes some ingredients that will perk up your taste buds. Items like coconut aminos, cilantro, and fish sauce will give it a distinct flavor that separates it from American-style chicken soup. Nonetheless, it’s still a great selection, and one that provides plenty of nutrition to those following a caveman way of eating. 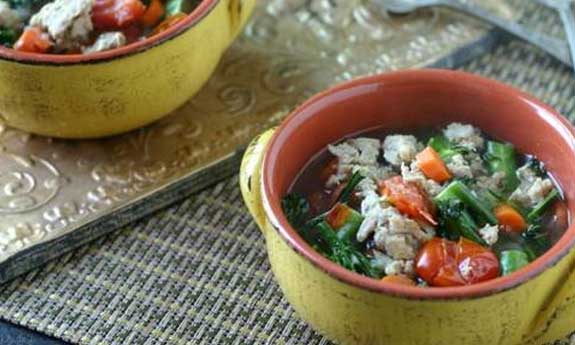 11. Chicken Sausage Soup with Vegetables
This is a great find because instead of using chicken breasts or chicken legs it’s using chicken sausage. That will give it extra flavor, and when you factor in all of the vegetables they’re using you can see that this will be quite a tasty soup. They’re using broccolette, which definitely falls within Paleo guidelines, and they’ve added cherry tomatoes, carrots, and onions to the soup to help round out the flavor. It’s worth trying out if you want something a little different, but not too different.

12. Tom Yum Gai
You can’t get far in Thailand without trying a version of Tom Yum. It’s on the menu virtually all over, and consists of an assortment of vegetables and your choice of meat. In Tom Yum Gai, gai means you’re adding chicken to the Tom Yum base, so it is a form of chicken soup. The vegetables they’re using here are a bit different than what you’ll find in Thailand, but the overall taste will be similar. Lemon grass will make this taste very Thai-inspired, as it’s frequently used there, and infrequently used in the States.

13. Tom Kha Gai
This soup is traditionally a spicy one, and because they’ve listed this as authentic you can bet that it’s going to turn up the heat. The use of red chili peppers will definitely get the job done in that department, but an interesting factor of this soup is the coconut milk base that it uses. That does a good job of calming the flames with its soothing and mellow flavor. Of course you will want to make adjustments to your own preferred spice level, but this is one soup you don’t want to miss out on.

14. Loaded Chicken Vegetable Soup
The only thing this soup might have missed is the kitchen sink when it comes to ingredients. They aren’t kidding when they say this is loaded, and the good news is that it’s loaded with items that are on the approved Paleo foods list. This means you are not only getting a good serving of meat, but a good serving of vegetables to go along with it. As long as you keep that nice 1:1 ratio between how much meat you’re eating and how many vegetables, your portion sizes don’t really matter. Eat until you feel content, and don’t fixate on quantities.

15. Chicken Zoodle Soup
If you want chicken noodle soup, this is the recipe to use because you’re getting noodles in the form of zoodles, which are noodles made from zucchini. This gives the texture of noodles, but avoids any issue with wheat or grains that comes in most pasta out there. What you’re really looking for when you’re seeking out chicken noodle soup is the feeling of the noodles in your mouth, and this can really get you most of the way there. The rest of the ingredients used are all pretty standard when it comes to chicken soup, so this is definitely a batch that will make you feel better if you’ve got the sniffles, or just need to warm up on a cold day. 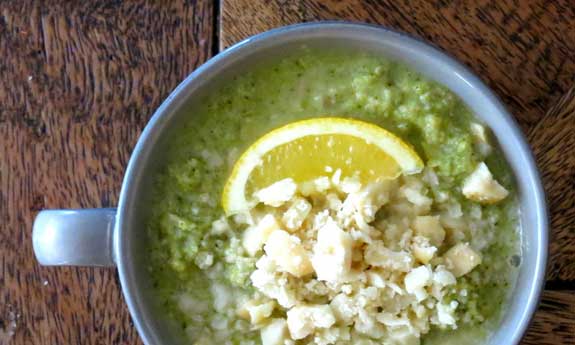 16. Broccoli and Chicken Soup
By being pretty much equal parts broccoli and chicken, you are following the Paleo code of eating meat and veggies in equal amounts for your main meals. This is a simple way of looking at it, but it’s the easiest way to remember what meal should look like. If you want to get more technical, you’d err on the side of getting more vegetables, as our hunter-gatherer ancestors would have eaten meat only when they were fortunate enough to kill rather than be killed. Yet vegetables and nuts would have been easier and safer to find on a regular basis. Broccoli, a cruciferous vegetable, is going to really add a ton of nutrition to this soup.

17. Paleo Cream of Chicken Soup
Cream of chicken soup is a very popular version of chicken soup, and there are a few things you’ll notice that they’ve done here to make sure you can have it. The first is that it doesn’t contain any dairy, getting its creaminess from coconut milk instead of cream or cow’s milk. The other is that they’re using healthy oils, either coconut oil, olive oil, or ghee, all approved while doing Paleo. She also says you can go with pureed cauliflower if you don’t have coconut milk on hand, which will provide a similar creamy texture while remaining dairy free, and also adding a healthy vegetable to the recipe.