Who doesn’t love Pad Thai? This popular dish combines sweet and spicy flavors into a delectable combination that is sure to satisfy even the most critical of taste buds. Unfortunately, since traditional Pad Thai relies on ingredients such as rice vermicelli noodles, it can end up being a bit carb heavy. Anyone who is looking for a low glycemix index option can try this paleo-friendly chicken Pad Thai instead using one of our favorite kitchen utensils, a spiralizer to replace the rice noodles with sweet potatoes. 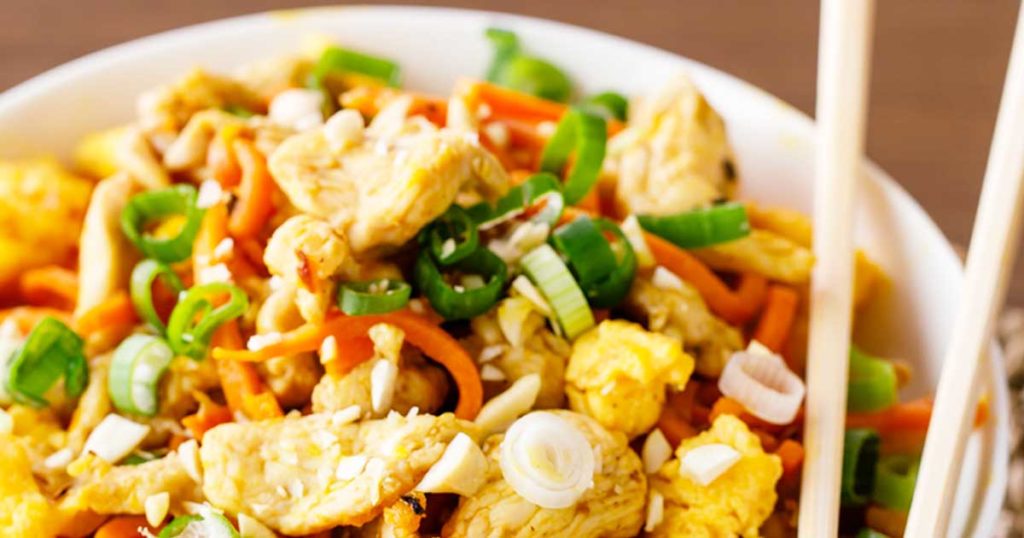 Spiralized sweet potatoes make a fantastic replacement for the rice noodles commonly used in Pad Thai. While it’s true they are a starchy vegetable, they don’t create the same type of glycemic response as other starches, such as white potatoes and rice. They raise blood sugar levels slowly, which makes them an ideal low carb option to use in Pad Thai for anyone concerned with keeping their blood sugar levels stable.

A single serving of sweet potatoes generally contains about 20 grams of carbohydrates, which is slightly less than the amount found in rice noodles. However, thanks to their low glycemic load, and the fact that many people following a paleo diet don’t include any form of rice or grains at all, they are a perfectly acceptable option for anyone who follows a more low carb diet. In addition, sweet potatoes are loaded to the brim with healthy nutrients.

They contain high amounts of fiber, vitamins, minerals and they are a great source of antioxidants, which help protect your cells from harmful free radical damage. 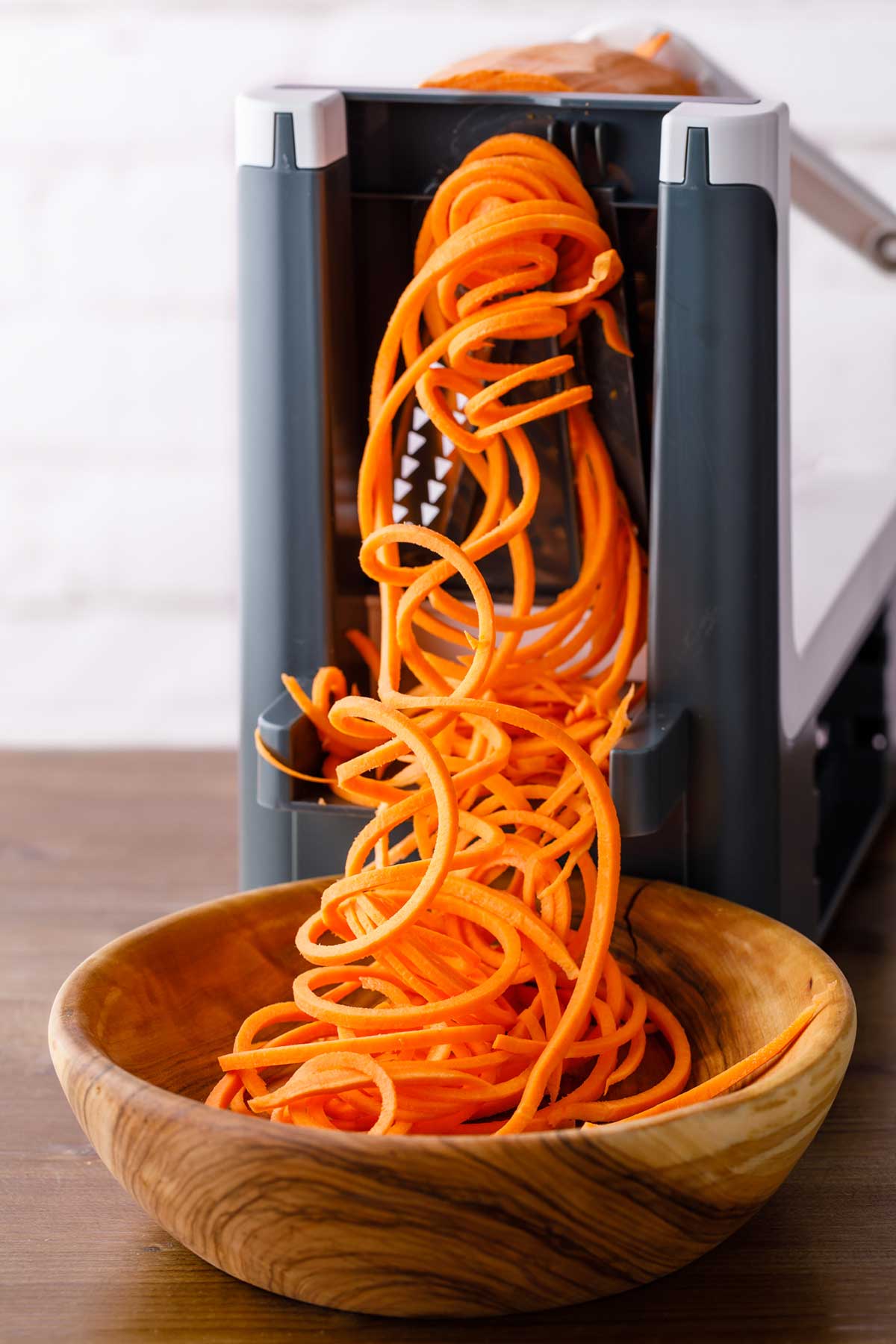 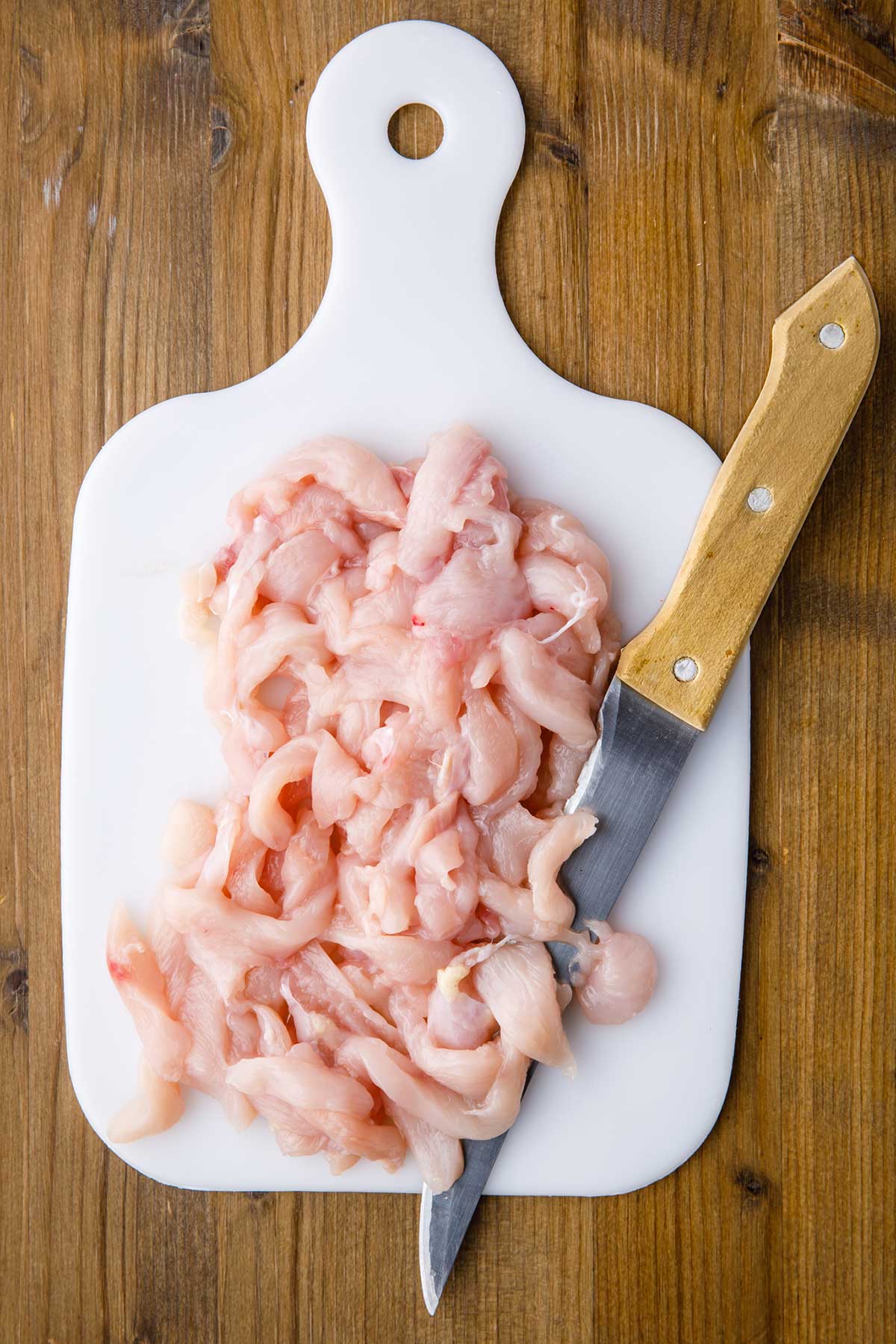 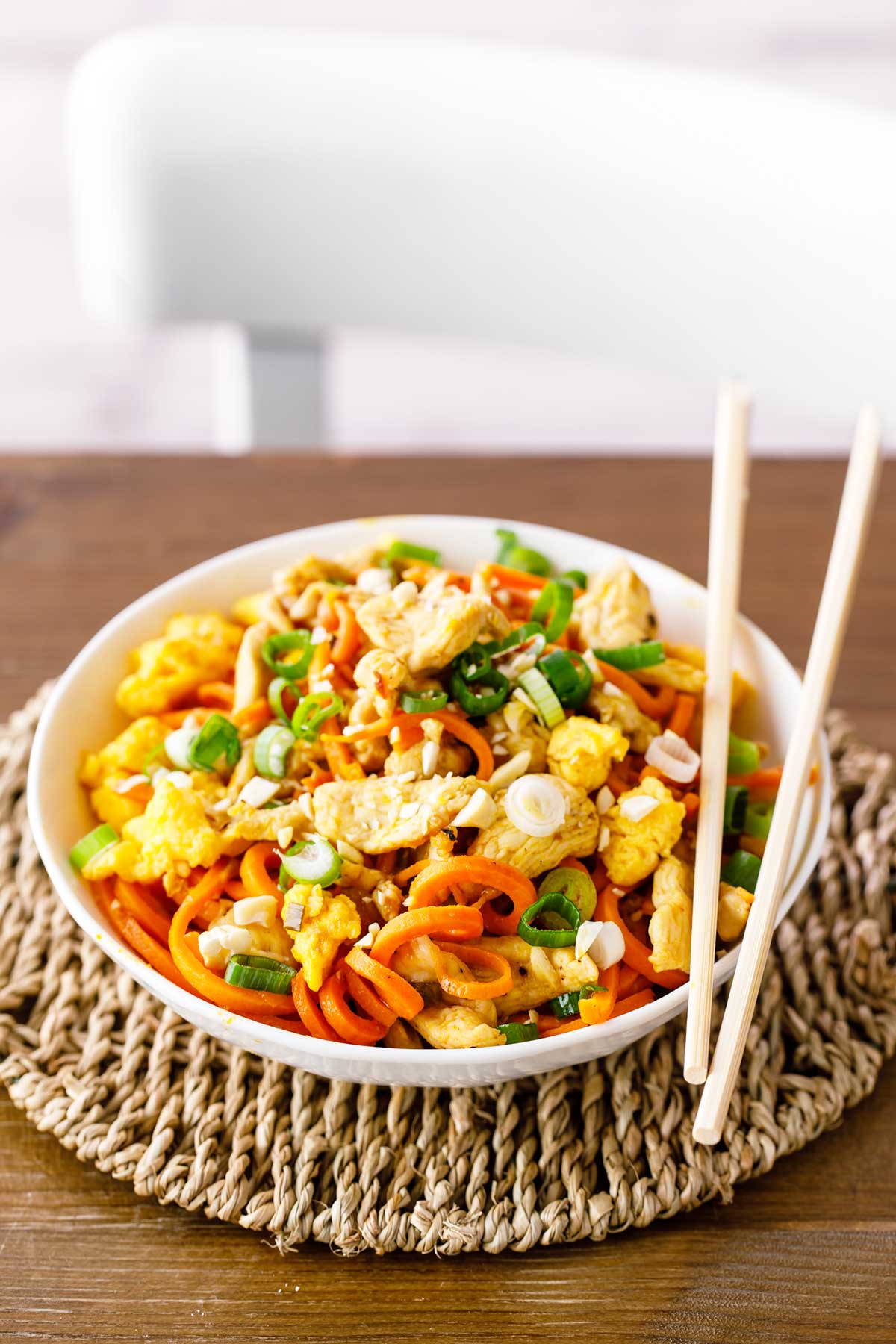 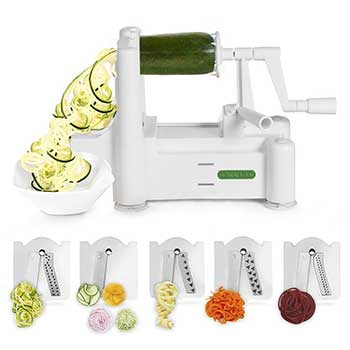 What makes this recipe work so great is the addition of sweet potatoes in the form of veggie noodles. Traditional pasta ingredients such as rice noodles are generally quite high in carbs and drastically affect blood sugar levels thanks to their high glycemic loads. By replacing pasta noodles with veggie noodles, you are still able to enjoy all of your favorite noodle dishes in a more healthy, low carb manner that remains paleo-friendly.

That’s what makes using a spiralizer so great; not only can you replace rice noodles with sweet potatoes, but there’s tons of other great recipe options out there that use several different kinds of veggies to replace traditional pasta ingredients. If you are following a paleo diet and still find yourself craving things like Thai food or Italian pasta dishes, there’s no reason not to invest in a spiralizer of your own so you can still enjoy all of your favorite meal options by adding veggie noodles. Not only can you make this delicious chicken Pad Thai recipe, but the spiralizer that we recommend here also comes with three recipe eBooks, meaning you’ll have plenty of options to choose from for tasty meals that use veggie noodles for dinner. That being said, here’s our favorite paleo chicken Pad Thai recipe that uses the spiralizer.

Looking for Paleo-approved ingredients for this Paleo recipe? Here are some we’d recommend:

Once you try out Pad Thai using sweet potato veggie noodles, we’re almost certain that you won’t want to go back to using traditional rice noodles. Not only is this chicken Pad Thai very healthy, but it also tastes extremely delicious. In fact, it tastes so good that you’ll be able to make your own meal from home that is not only paleo-friendly, but also rivals any Pad Thai you’d be able to find on the streets of Bangkok.

If you love this Pad Thai recipe using spiralized sweet potatoes as a noodle replacement, you absolutely must try out a few of these other veggie noodle dish recipes we have!