Soups are great ways to warm up and fill up, and pack in all the healthy stuff you love, without having to cook three different dishes and use 18 pots and pans for a regular meal. And this chicken minestrone with zucchini noodles is a great example of why anyone eating Paleo needs to have a few good soup recipes under their belt. 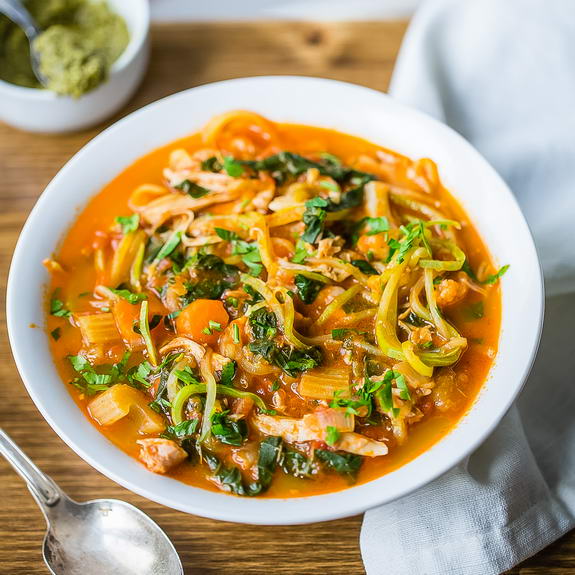 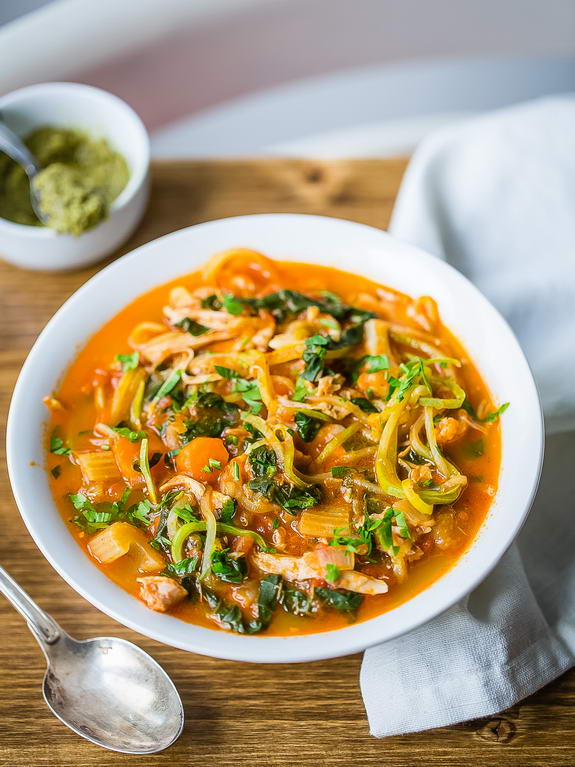 Starting in late fall, I take to making soups. The colder it gets, the more I make soup. If I make too much, I chuck a batch in the freezer or bring some to a friend or co-worker.

First of all, soups are pretty universally easy and quick to make. Aside from chopping and a bit of hands-on cooking at the start, the time it takes to make most soups is while it simmers on the stove. During this time, the flavors of the different ingredients heighten and blend, as veggies and other goodies cook. But while the soup is doing all that hard work turning into a masterpiece, you’re sitting on the couch reading a book or chatting with a friend. It’s the most efficient way to make a delicious meal, if you ask me. 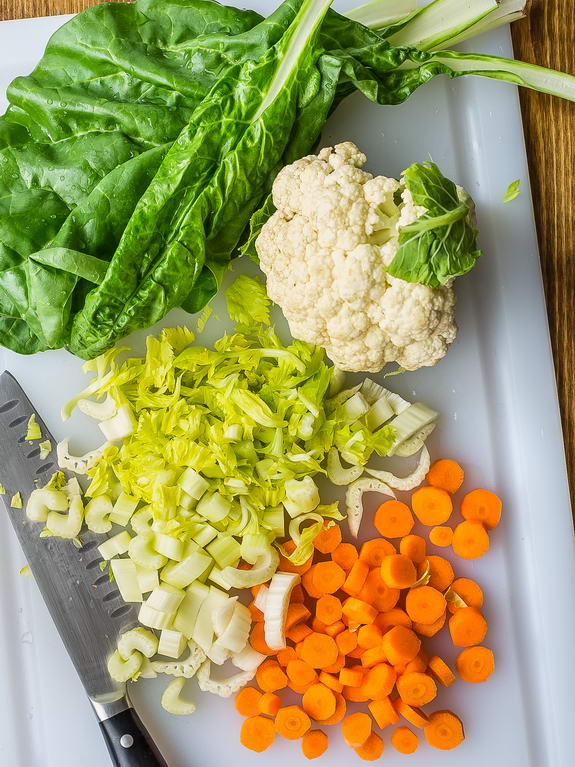 Soups are generally pretty easy too: some chopping, maybe a little sautéing. Just don’t burn anything and you’ll be fine. No advanced skills required! The most skilled part of this recipe is probably cooking the chicken. But don’t worry too much that the chicken is all the way cooked through when you’re first cooking them.

The first cook of the chicken is mostly to get the browning going – that’s where there’s some big flavor. Even if you’re chicken thighs aren’t cooked all the way through during this step, they will finish cooking during the rest of the process. How easy is that? 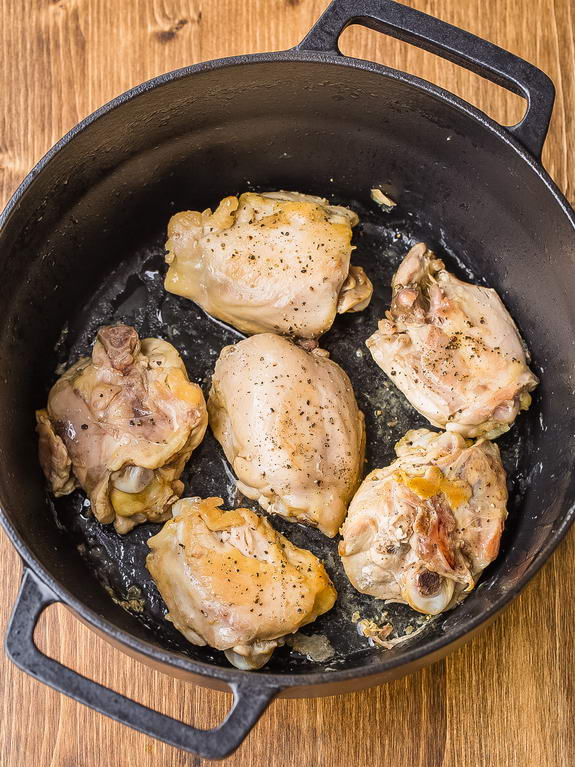 Instead of wheat-flour noodles, we’re putting zucchini noodles into this recipe. Like most of my other favorite Paleo-friendly substitutes in recipes, this substitution not only takes out the bad stuff (wheat flour), but adds good stuff, in the form of the vitamins and minerals and fiber that come naturally in zucchini. I use my veggie sprializer to make zucchini noodles. If you are eating Paleo and haven’t yet splurged on a spiralizer, I highly suggest you get yourself to a kitchen store ASAP. You can use it time and time again in so many different recipes and it saves so much time – and makes much better noodles – than if you’re simply cutting them by hand. 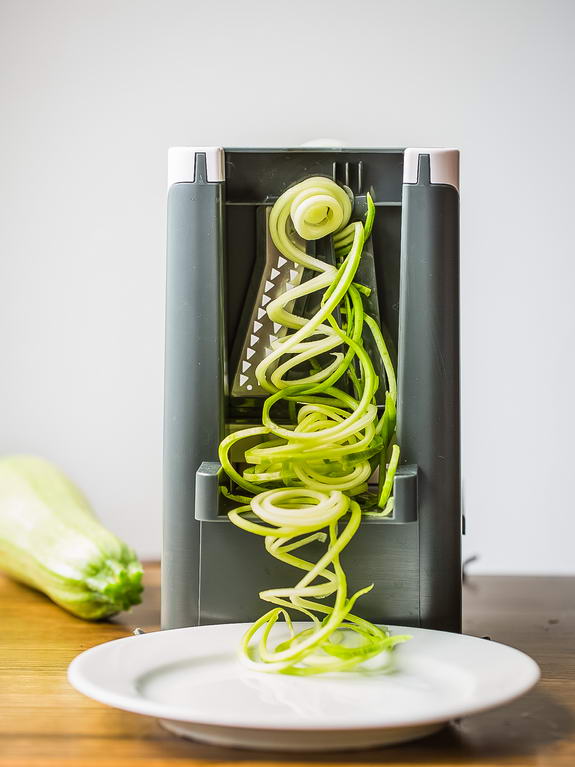 Now let’s talk about minestrone soup, in particular, a bit. There are as many recipes for minestrone soup as there are Italian grandmas out there but the basic idea is that you use whatever vegetables are fresh and ready to be eaten. So we’ve used a lot of them in this recipe: onion, celery, carrot, cauliflower, chard – and some tomato sauce (no sugar added!) to give it that rich tomato-vegetable flavor. 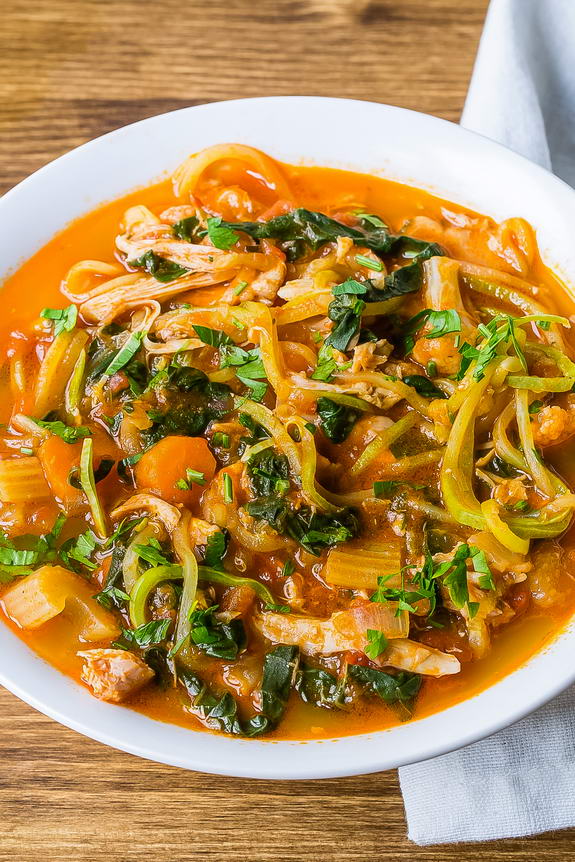 But if you happen to have other veggies on hand – say, for instance, mushrooms, spinach, or even butternut squash – feel free to tweak this recipe. Just make sure you’re keeping the amount of veggies about the same so you don’t end up with tons of vegetables and only a tiny bit of broth. 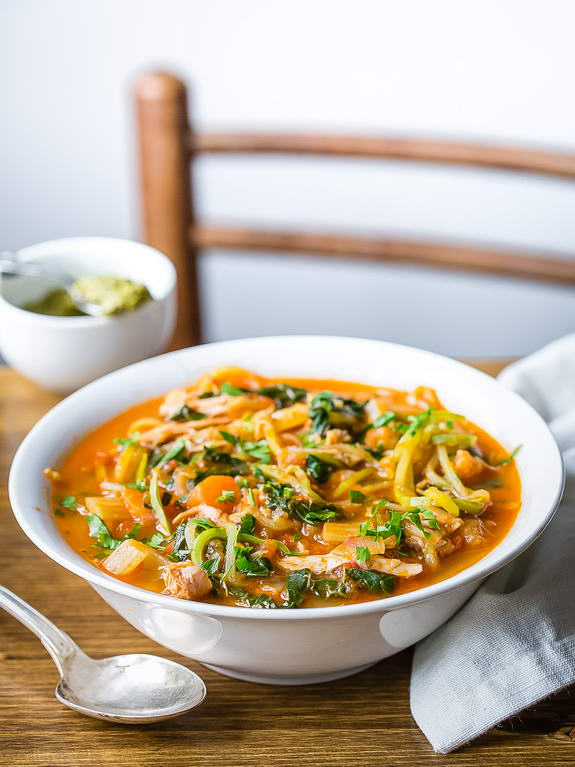 And one last thing – while I love my cold weather soups, because this has a ton of vegetables in it and isn’t thick or creamy, I also think it’s great during the summer. You could head to the farmer’s market in the morning and have a great bowl of soup by lunchtime! But whatever time of year, take a moment to slow down and enjoy this delicious and healthy chicken minestrone soup with zucchini noodles.

(Make this next: Mushroom Soup with Ghee and Bacon)